In November 2003, I learned about a midair collision of two Blackhawk helicopters over Mosul. We lost 17 soldiers. It broke my heart to think of those brave young soldiers, the gals and guys next door who signed a pledge to defend the U.S. Constitution and to put themselves in mortal danger.

What were the last 30 seconds like before they lost their lives? I thought.

Compelled to make a large painting to honor these 17 soldiers, and everyone like them, I began with a small 9-by-12-inch study. I called a patriotic buddy and asked him to come over.

“This is fantastic, Steve,” he said, as he held the little painting, still gleaming wet. “You know, I have a godson who was a Blackhawk pilot in Afghanistan. He’s graduating from Stanford this spring. I’m gonna give this to him as a graduation gift.” 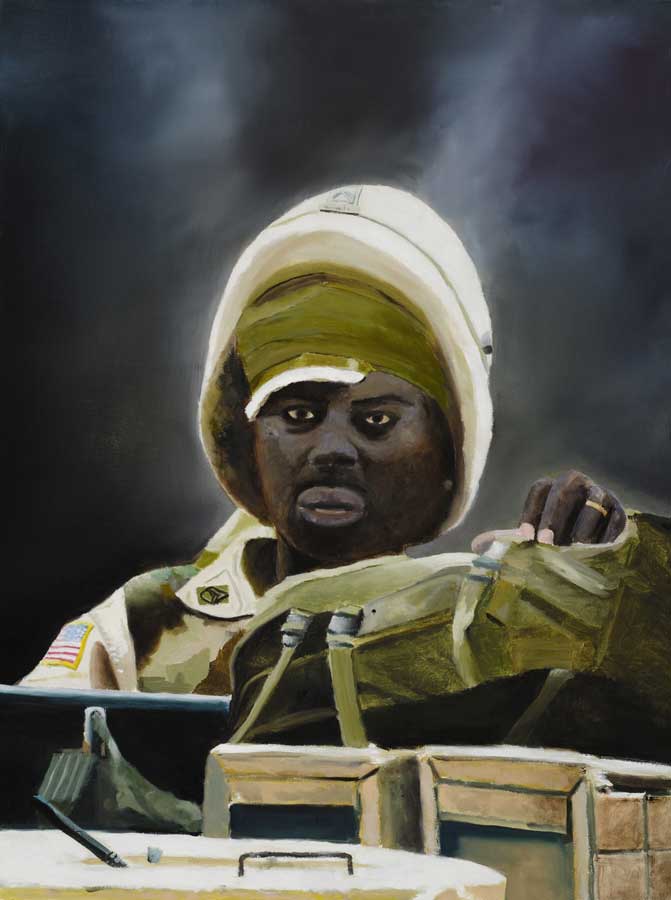 Portrait of a Soldier by Steve Alpert. Courtesy of the author

After handing me a couple of hundred bucks, Jim drove away. As the car disappeared down the street, I marveled that this first little painting, a study, had found its way to a genuine Blackhawk pilot. A miracle. Crazy. How could that happen?

An unexpected doorway had opened. I walked through it.

I painted a large painting of a Blackhawk helicopter: 42 inches by 60. That painting begat many more, strewn around my studio.

“What the hell is going on here?” Dorothy said, as she walked in one day and saw all the Blackhawks.

“What are you going to do with all these helicopters?”

“No clue,” I answered. All I knew was that I had to make them. It would take almost four years until I understood their purpose.

2007, Walter Reed Army Medical Center. Two friends and I visited the hospital to thank our vets for their service. We visited with four young men that day, two of whom were severely wounded. That day changed my life. I also learned about Fisher House and had an epiphany of what my paintings were for: to raise consciousness and funds in support of veterans.

The following year, I donated nine paintings to Fisher House, raising $40,000—every penny going to Fisher House. My inexplicable compulsion suddenly had a true purpose.

July 1985: A stinking-hot and humid day in D.C. I stumbled upon the Vietnam Veteran Memorial Wall by happenstance, or so I thought. Overcome by all those names etched so elegantly on that wall, I bent down to read a letter in a plastic stand from a mother to her son on his birthday. I read a few lines and then was overcome by this mother’s grief—and my own dark pit of sadness and regret and confusion. 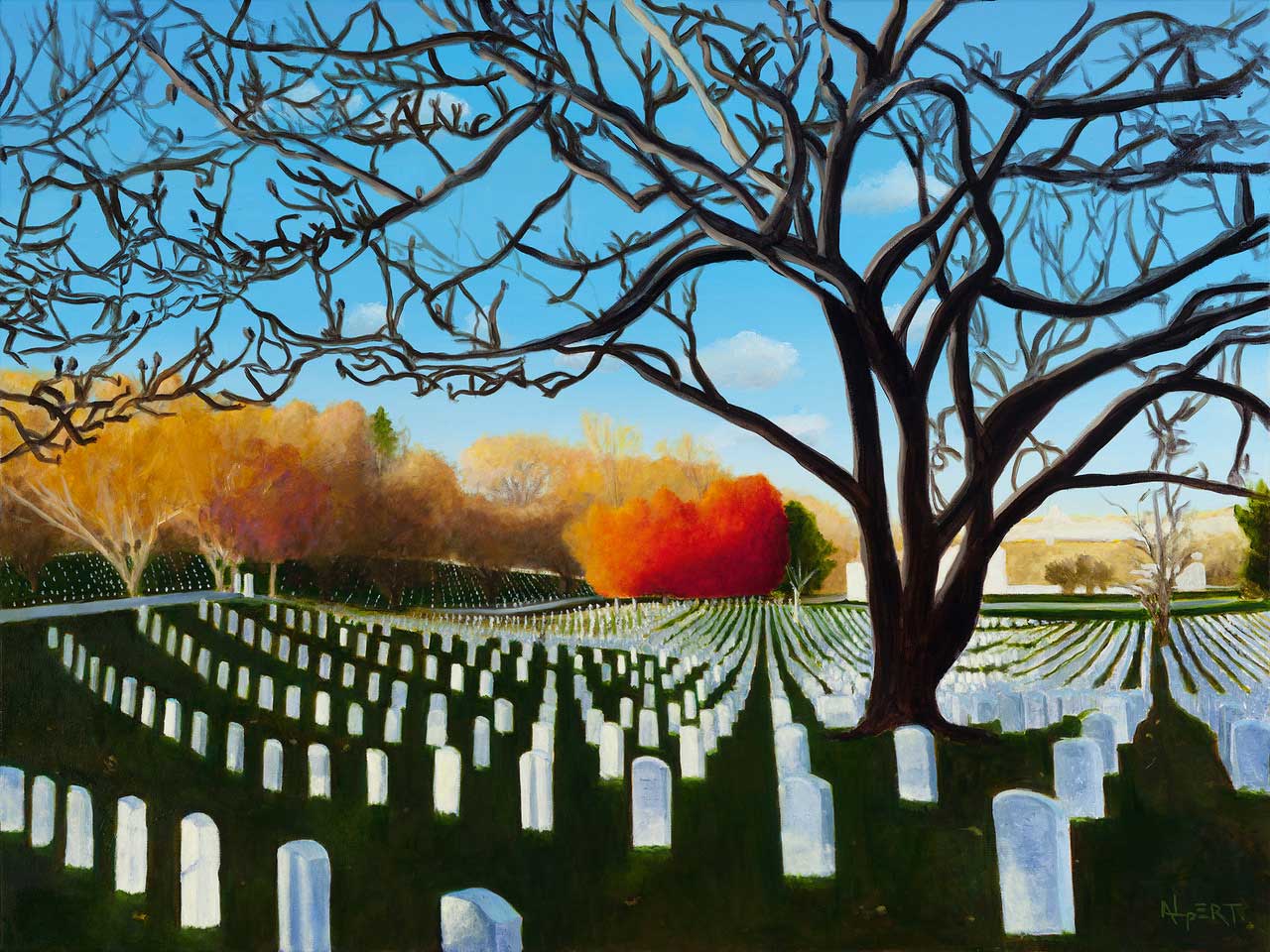 Fields of Honor painting by Steve Alpert. Courtesy of the author

My name should be on that wall.

Truth was, I did not know anyone on that wall, and I had not served. A student deferment and a high enough lottery number kept me from the draft, and by the time I got out in 1973, the war was winding down. I missed it.

At the wall, I collapsed in a ball of tears and sweat and snot. Feet walked around me. I don’t know how long I was hunched down there on the ground, but finally I dragged my butt out of there. But I came away with the notion that I was a coward, a fraud, I never served my country. That I missed something big in my life. That feeling lives in me to this very day, and remains my greatest regret in this life.

To borrow a line from the gripping HBO movie Taking Chance: It was not my time.

In 1968, my father and I visited our local congressman and asked him to initiate paperwork for me to gain entry to West Point. I had been to the Point many times on school trips–only 45 minutes away–and ran in high school track meets at the field house. The campus and atmosphere spoke to me; I wanted to be there. It was beautiful and intimidating. A short time after we met the congressman, a statistic came out: The average lifespan of second lieutenant West Point grad in Vietnam was three weeks. My father and I agreed maybe this was not the best time to do this. I backed off. 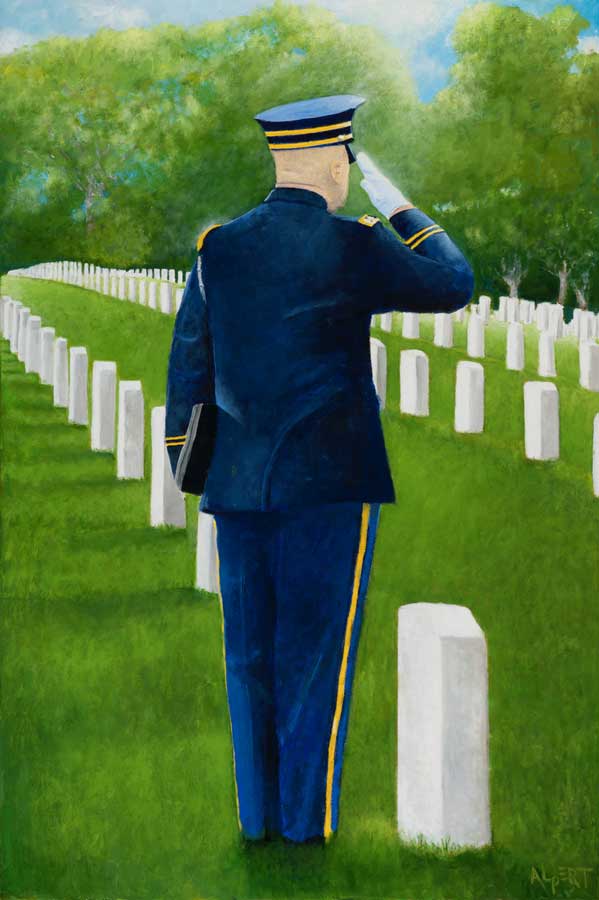 Final Salute painting by Steve Alpert. Courtesy of the author

In high school, I was interested only in the 100-yard dash and Cathy Lewis. Vietnam was a long way off, and I did not harbor any ideas about being a hawk or a dove. During my college years, I witnessed all the anti-war demonstrations. Then My Lai. And Kent State. The deaths of the Kent State students killed by the Ohio National Guard pushed me over the edge. I had thought that LBJ was a great president, but I could not understand his belief in the prosecution of that war. And now Richard Nixon was president. Now there was somebody my generation could really get upset about. I became embarrassed to be an American despite all my patriotic upbringing in the post-WWII era.

Summer of 1972, I took a solo hitchhiking adventure to discover the American West, the people, and myself. Those two months on the road demonstrated to me the goodness of our people, and the astounding natural beauty of our country.

I worked in television as a producer/director for 30 years in news, documentary, and videos for corporations. Then at 49, I made the switch to fine art painter. I had been a hobbyist painter since I was 19, and now it was time to take the deepest of plunges.

I have come to learn that all artists make their art for one defining reason: To learn the truth about themselves. My journey as an artist demonstrated to me the love I have for my country, as well as leading me to the men and women who put on the uniform to face whatever comes their way as a result. My heart and soul worship their courage. I felt that when I first began making those Blackhawks. It was as if the universe sent a question through my studio window. “Will you do this? Will you make these paintings?”

Yes, I would indeed.

I never looked back.

Portrait of a woman Triptych by artist Steve Albert. Courtesy of the author

May 2015: I photographed a full honors funeral ceremony at Arlington National Cemetery. Seven of those photos became large paintings that are now installed at the Pentagon. I am told they will be there indefinitely.

Along my journey, in 2007, I made a painting, a portrait of a U.S. Army sergeant in repose after a firefight. He has suffered a slight head wound. He has the thousand-yard stare.

I struggled to commit to make that painting. I was fearful I could not do this soldier justice.

He took up permanent space in my head, challenging me, daring me to paint him. It was nuts. He cursed me, called me a coward. I moved his canvas around the studio, burying it behind other canvases. For a year and a half. To no avail. He dogged me until I gave in and said, “OK, motherfucker.”

I gave it my best. When I completed the painting, it shocked me to my core. He was the man I had always wanted to be. In the field, going after the mission, responsible for his men, wanting to bring every single one back alive. I stepped back from the completed painting, and thoughts of the incomprehensible weight of unimaginable grief and destruction of soldiers and their families streamed through me. “Portrait of a Soldier” took me deep inside myself, and then out into the broadest scope of head-spinning human history. Death and destruction in all the wars throughout history.

What is the purpose of war? Is this the best we can do to work out our differences? Will humans always behave this way? Have we learned anything?

I have surrounded myself with veterans. I lead an art workshop for veterans at Fordham University in New York City. The veterans have taught me so much; I hope I bring a fraction of the insight to them that they bring to me.

I am involved in making a series of large portraits of women soldiers, current and past. Called “Proudly She Served,” I am teamed with a special woman Navy aviator, Linda Maloney. Together, along with a team of volunteers, we will shine a light on courageous women who have served.

Anyone involved with men and women in uniform is not immune to the tragic reality of soldier suicides. I lost a close friend a few years back. He took his life in his car in a public parking garage. He earned a Bronze Star for his service in Iraq.

And yes, I still feel that I owe. It is a good feeling to belong and contribute in a way that I can at this time in my life. My undying appreciation for all who serve with such courage lives in me.

True, I came a little late to the party. I will be one of the last to leave.

My Father Died Over 60 Years Ago. I Feel That I‘m Just Now Meeting Him
Afghan Peace Process Puts Life in Limbo for Generations of U.S. Allies, Former...

“I’m Not a Sir”—Dearth of Women Causes Marines to Expect Male Leade...
Scroll to top