The camera stays on my lap; my legs stick straight out, and I use my body armor’s ceramic plate to prop my back against the shaded concrete wall of a railroad bridge underpass on the outskirts of Bayji, Iraq.

Even in shade, the degrees of dry heat feel uncountable. The camera stays on my lap because, after miles of walking, I’m too weary to lift it. But without proof from the camera’s chronology, the heat might melt away the memories.

Some memories come as secrets revealed much later—as with my favorite photo, an image of men on a break, beneath a bridge in Bayji during my first embedded reporting trip.

I had embedded with paratroopers of Charlie Company, 1st Battalion, 505th Parachute Infantry Regiment, 82nd Airborne Division, and it was my first dismounted patrol outside Bayji’s Joint Security Station. It was July 19, 2007, and the joint security station was a strategy of the “surge,” enabling U.S. soldiers to patrol Bayji on foot, alongside Iraqi armed forces.

Surge, embed, JSS: words from an extinct language remembered from long ago. In 2007, the terms felt permanent—truths hard like the desert. Dig forever, but it seemed that stony ground had no secrets left to give.

Coincidences don’t mean anything until we find a reason that they matter.

I should know better, about war and secrets. In 2014, I discovered my photograph’s creation coincided to the minute with the death of Cpl. Brandon Craig, memorialized in Ashley Gilbertson’s book and photographic collection, Bedrooms of the Fallen. I had taken a series of photos from 11:55 a.m. to 12:05 p.m. In those same moments, Craig’s Stryker had rolled up on an improvised explosive device near Hussaniyah, about 125 miles away from Bayji, in an attack reported at 12:04. I wrote about Gilbertson’s book in 2014, ruminated on the coincidence.

Coincidences don’t mean anything until we find a reason that they matter. So I went on a patrol 13 years ago, I took a photo of tired soldiers at war, I matched the timing to the death of another soldier I never met. So what? So if I don’t try to find some larger meaning in that link, across distance and years, then I was just a fool on a fool’s errand. The photo captures Craig’s last moment, even if he wasn’t in the frame. American soldiers, an Iraqi cop—a picture of tired men at war, like Craig. It’s an honest moment, a soldier’s moment.

A poster-sized version hangs on my wall, so I go back beneath the bridge every day. This day, any day, I can revisit my photo and that fatal connection. 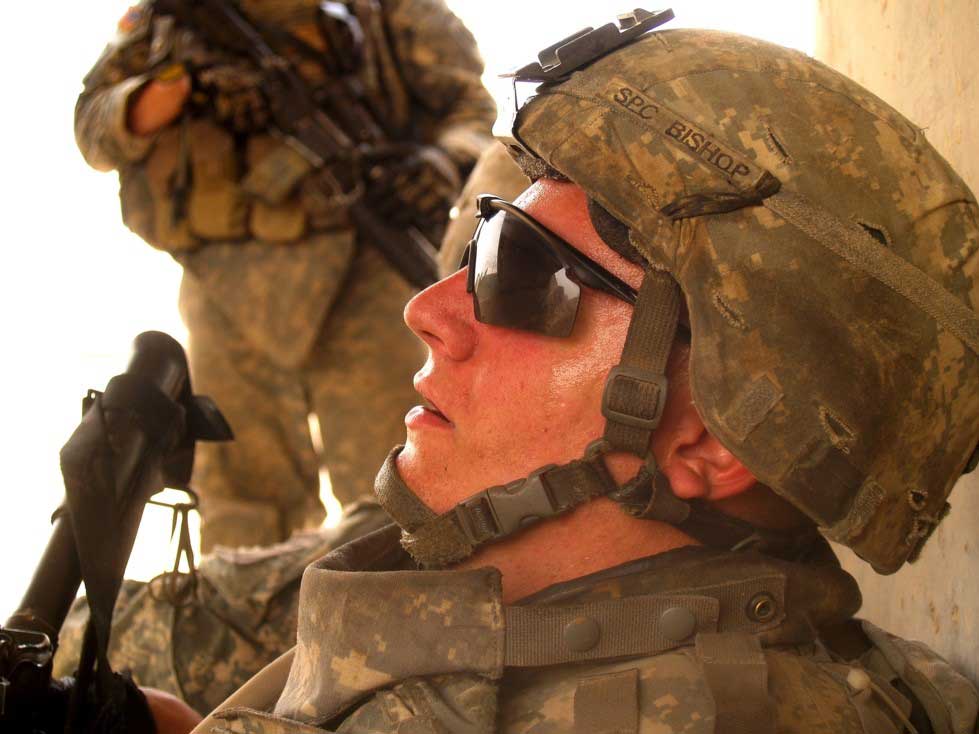 Spc. Daniel Bishop rests against a wall underneath a bridge. Photo by Nathan S. Webster.

Three soldiers in Gilbertson’s book died when I was in Iraq, all from 2007: Spc. Zachary Clouser, July 18; Cpl. Christopher Scherer, July 21; and Craig, from Earleville, Maryland, July 19.

Before the IED, Craig lived in Iraq as a soldier in his element, far from home and on the clock. Like the soldiers in Bayji who I chronicled for a few hometown newspapers. They weren’t heroes, for the most part. They chose to do a hard job in a hard place. Too often, maybe, we remember only the most catastrophic last moments of the choice to serve.

Maybe Craig could have a more accurate last moment, a better reflection of that job? I took pictures, observed, lived through it, even if I was 125 miles away.

On that day, an Iraqi policeman squatted in front of me. Two American soldiers leaned on a ledge across from us. Staff Sgt. Charles Patterson sucked from his CamelBak, puffing his cheeks with lukewarm water. Pfc. Ben Gwaltney grimaced in the heat.

Earlier in the day, as we headed through the city itself, Gwaltney tossed a smoke grenade to cut off the view down a long straight street. He pointed out a car he’d seen a couple times.

“I think he’s shadowing us,” he had told Spc. Tim Vergo, not in alarm—just a possibility. To me, he said, “Take a picture through the smoke. There’s your magazine cover.”

Later, underneath the bridge, I raise the camera, and Gwaltney, Patterson, and the Iraqi appear in the camera’s viewfinder. I’m only a few feet from the Iraqi cop, but he doesn’t look at me.

Iraqi soldiers and policemen loved to pose, and grinned toward my camera no matter how far away they were. This cop doesn’t turn his head even an inch to his left, doesn’t smile.

In the camera lens, the Iraqi fills the right side’s foreground, the U.S. soldiers centered behind him. The bridge’s roof leads the eye in a right-to-left line. Yellows, browns, and tans stand out, shaded from the sun’s bleaching glare. The camera clicks, and there it is. I think the best photo I’ll ever take, 11:55 a.m., July 19, 2007, an image destined for museums and exhibitions.

I took other images, but expressions changed, focus was lost. The moment’s gone, so I lean back, rest my head on the bridge foundation. The Iraqi cop then turns to me, makes an effort to smile.

“Ha’ar,” the Iraqi says. Hot. About the only Arabic word I recognize. 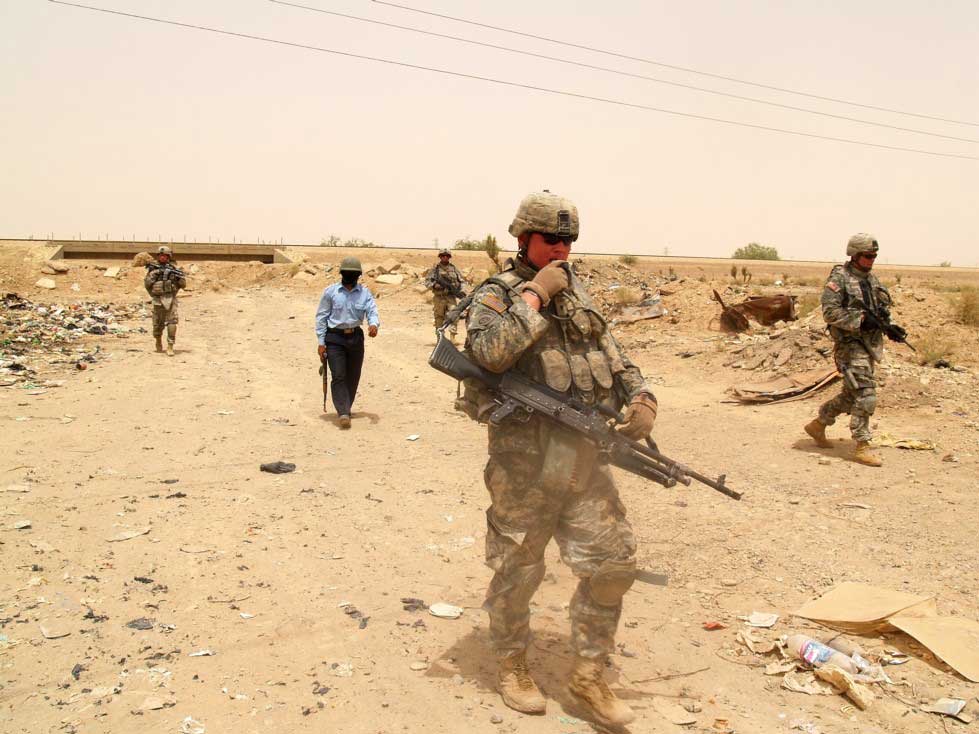 “Harar,” I say, nodding, trying to show I understand, and agree. “That’s a word I won’t forget,” I tell him in a language I assume he does not know.

The Iraqi repeats himself, “Ha’ar,” and looks away.

Next to me, Spc. Daniel Bishop rests his head against the bridge wall; his half-open mouth pants heavy breaths. “Sun’s awful right at noon,” I had said to him, on an earlier day back at the JSS. I had stood in a sliver of cool-ish darkness back at the JSS entrance; he sat in the sun and smoked at a picnic table. “Wipes out all the shade. Must be the worst part of the day, huh?”

He looked up, not unfriendly.

Back under the bridge, six minutes have passed since I took the photos of the Iraqi cop. Six minutes is a long time. I could have walked around, taken more pictures, come back, and still had time to rest. I never move.

I only turn to take a picture of Bishop. By the image’s timestamp, it’s 12:01—high noon.

Wilson’s eyes seem closed behind his sunglasses. No sweat drips down his cheeks. His and all our faces glisten with a uniform wetness; we sweat from everywhere.

The Iraqi speaks again, directing his Arabic words to Bishop in what sounds like a conversational tone. This U.S.-Iraqi cooperation is the point of the JSS. But camaraderie doesn’t last much past trudging together on these patrols.

“I don’t understand you, guy,” Bishop mumbles. “No hablas Arabique.” 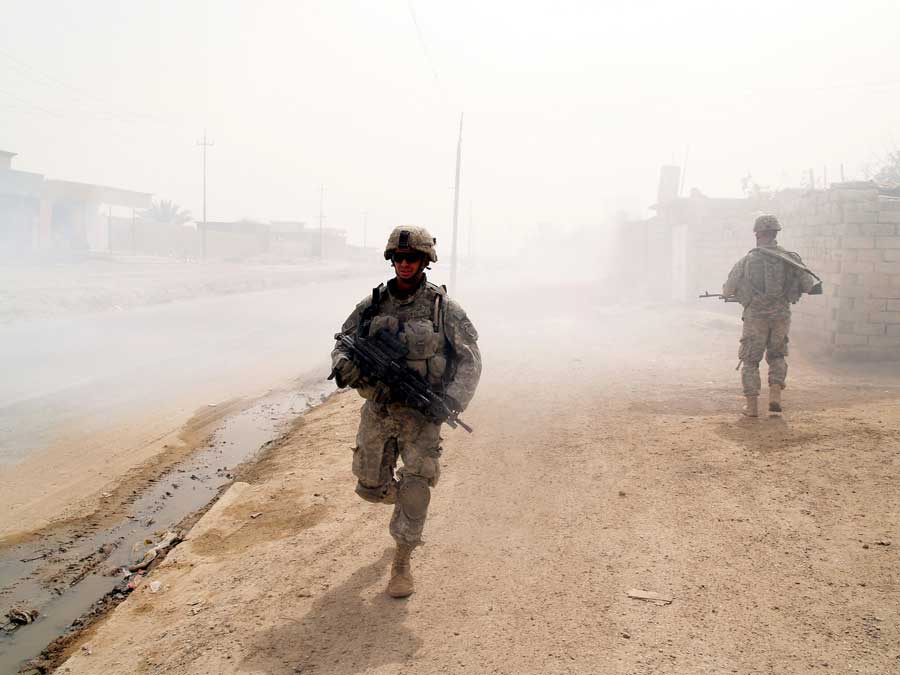 Pfc. Benjamin Gwaltney (left) and Spc. Tim Vergo walk in the cloud from a smoke grenade on a Bayji, Iraq, street. Photo by Nathan S. Webster

The Iraqi’s words, the sentiment he tried to express, I can guess:

Who’s the guy with the camera?

How long you think we’ll be out here today?

You have a wife back home? You have babies?

But underneath lay words I’m sure the Iraqi really wanted to say, to Bishop, to me, to all of us.

The Iraqi says something again, but now to himself, looking toward the sunlight and the desert.

“What paper you work for?” Bishop asks me, changing his attention to somebody he can speak with, somebody new to break the monotony.

“Freelance,” which means nothing to him. I try to explain. “So I’ll call your local paper when I get back, tell ’em I got photos and a story about you. Show people back home what you’re up to.”

I laugh, trying to commiserate.

“This a normal patrol?” I ask, and Bishop mutters, “I dunno. I guess.” I regret my words immediately. Normal compared to what? It’s Iraq in July.

None of that–the heat, the aggravation, the confusion or the wonder—comes across when Bishop’s picture eventually appears on the front page of southern California’s Inland Valley Daily Bulletin. The viewers will see only a tired soldier’s profile. No before, after, just a middle.

The squad leader soon rallies everyone and we return to the light of an awful sun for the meandering journey back to the JSS.

Walking backward, I take a photo focusing on Vergo. It’s a good image with a line of direction that looks sharp when it appears on the front page of the Buffalo News. 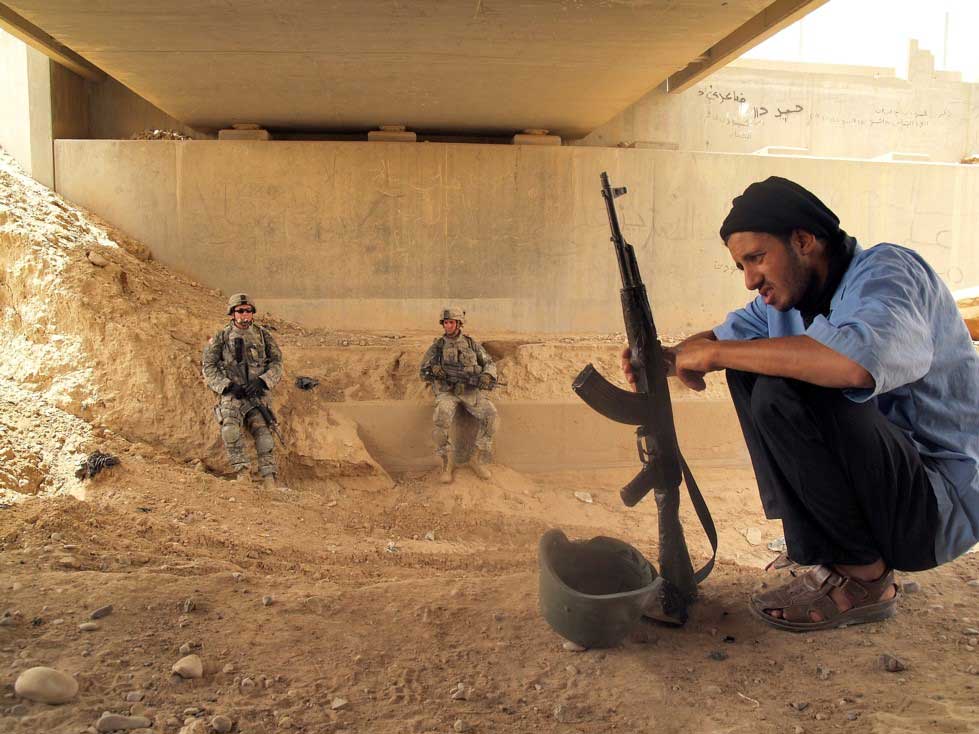 An Iraqi man out on patrol with U.S. soldiers takes a break beneath a bridge. Photo by Nathan S. Webster

In 2009, I embedded with Charlie Company again, in a quieter time and place. Vergo was still there and I asked him about reminiscing about the bad old days. “I don’t know,” he said. “There’s plenty of funny stories, but I’m not a good storyteller.”

Can photos of something that isn’t there be any kind of memorial? Is coincidence enough?

At 12:05 p.m., July 19, 2007, Vergo and the others walk away from the bridge and our short break. It’s a soldier’s moment, not heroic and not brave, only trudging along in a noontime second of a hot day, sweating under a Kevlar and wearing boots and armor and carrying a weapon in case.

The top of the railroad bridge is visible behind Vergo, the final image in which it appears, and my eyes take it all in, for that last moment. 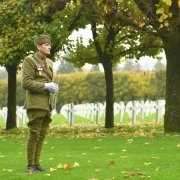 The Military’s Next Agent Orange