“So, where are you from?” The question used to throw me whenever it was asked, long after it was reasonable to be confused as to the answer. I didn’t know where I was from. What does it mean to be “from” a place, anyway?

And how could I be “from” a place I was excited to return to, but had to rely on secondhand memories to recall?

Although born in the United States, my relationship with my country began in an unorthodox way. At six weeks old, I left the city and state of my birth to await my father’s orders in the U.S. Army. At six months old, I was on my way across the world to begin eight years of frequent moves. Two years in Seoul, South Korea, and the addition of a younger brother; three years in Givry, Belgium, and the arrival of a baby sister; two years in Herndon, Virginia; and a final move from Virginia to upstate New York. And each time I would start at a new school, make new friends, attend a new ballet studio, join a new soccer team, and side-eye the question, “So, where are you from?” 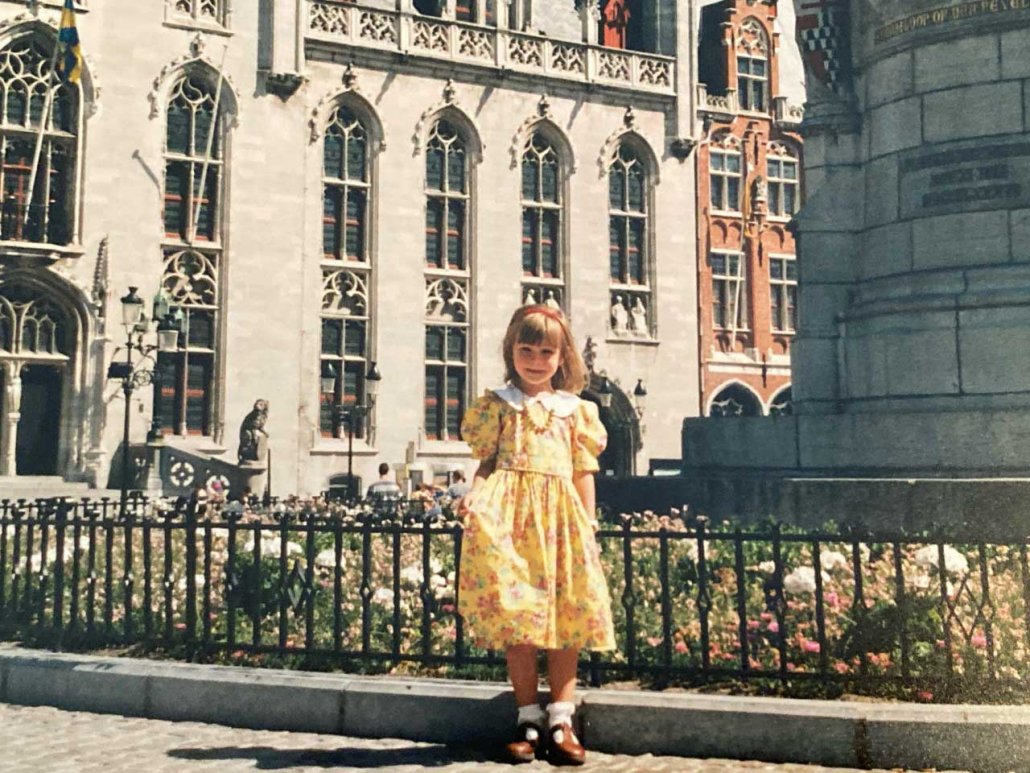 The author in Bruges, Belgium, while her father served in the military. Photo courtesy of the author.

When my parents told my brother and me that our next move would be from Europe to Virginia, I burst into tears. Confused, since I had previously begged my parents to fast-track our next move as I was “bored,” my dad asked me why I was upset. Was I sad about leaving my friends? he asked. I could be pen pals with them, which was a lot of fun.

“No,” I sobbed. “I don’t want to go to Virginia—you said we were going to the States!”

Now, as this story gets repeated at every family gathering, I flash back to the little kindergartener who was excited to return to the country of her birth but who had just begun to realize that she didn’t know America at all.

The early years of my life spent in South Korea don’t even register in my memories. There are pictures of fascinating places, of travel my parents brought me along on, posing my toddler self in front of ancient temples in Japan, beaches in Bali, palm trees in Hawaii, and skyscrapers in Seoul. I did return, as a child, to my parents’ home of upstate New York for the birth of my brother, spending time with both sets of grandparents, but I was too tiny to have real memories of “home.”

Our family, then four strong, then moved across the world from Asia to Europe, setting up house in the small village of Givry in the Belgian province of Hainaut, surrounded by other military families, Belgian neighbors, and farm animals. However, I cannot recall any of these life experiences. My earliest memories begin as a nearly 4-year-old attending Belgian preschool. The decision to send me to a local school rested with my mother, a French teacher by profession who understood how young children soak up foreign languages like sponges.

At school I was an almost-Belgian child—speaking French with a level of fluency that now eludes me, even after 25 years practicing the language, earning a bachelor’s degree in French, and spending two stints in-country. Occasionally I taught my classmates—and teachers—the stray English vocabulary word, and I flaunted my Americanness as something that set me apart from the other kids when the situation called for it. At home, however, we were almost a classic American family: my father watching American sports at off-hours because of the time difference, while my mother enjoyed the chance to speak French with the neighbors. 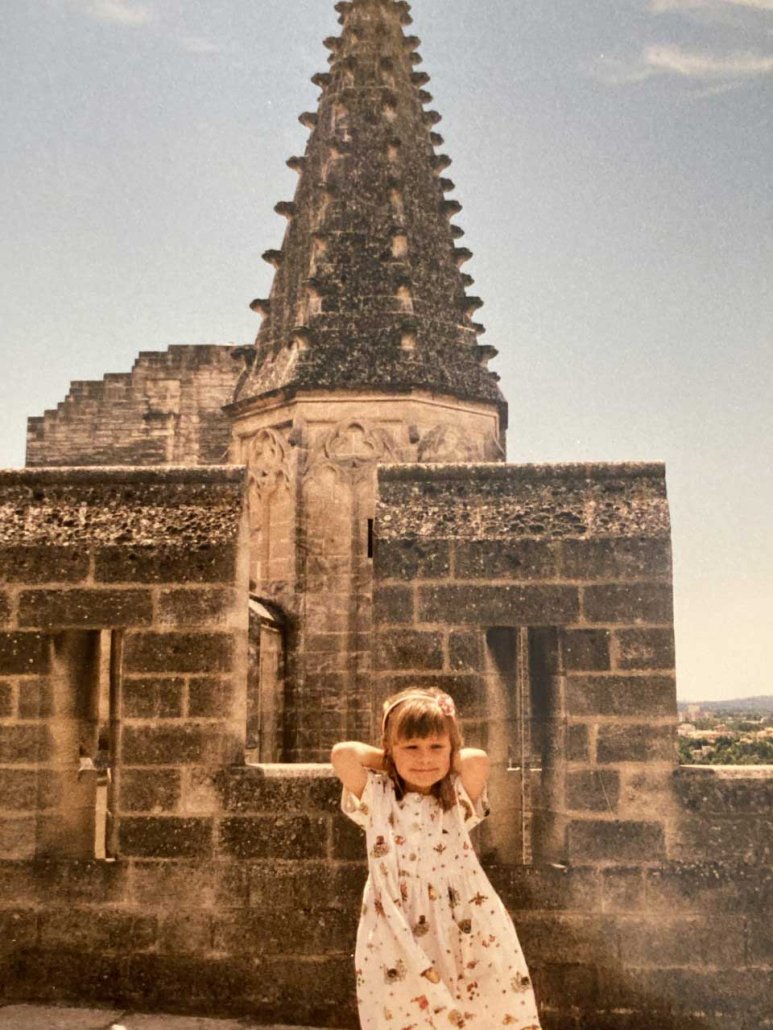 The author in the South of France. Photo courtesy of the author.

I knew that my family and I were Americans—and that it made us different. Not outsiders, per se: Our community in Belgium welcomed our military family, asking my parents to participate in cultural festivals like the Carnival of Binche or inviting us for dinner and playdates. But that we ate Thanksgiving dinner, barbecued on the Fourth of July, and drank milk with dinner set us apart from the overall Belgian culture.

After we moved from Belgium to Northern Virginia, “culture shock” set in. I can’t help but think that subsequent culture shock experiences in my life—studying abroad in the South of France in college, teaching English in the French Alps after graduation, moving to Washington, D.C., for graduate school—are associated with my feelings of culture shock upon moving back to the land of my birth and being introduced to a classroom full of fellow American students. My culture shock came from my introduction to my own country.

All of a sudden, I wasn’t the only American in the room. As far back as I could remember, being American was different. Now, everyone was American. I remember getting funny looks when I introduced myself to my first grade class with, “Nathalie, and I’m an American.”

“Well, obviously,” their faces said. “What else would you be?”

Spending the first five years of my life abroad gave me an American identity wholly distinct from the geography of birth. I didn’t love America because that was where I had first learned to walk, or talk, or go to school. I didn’t associate America with home yet. In fact, I made it clear to my parents upon our move to Virginia that not only was America quite different from Belgium, but that I wasn’t totally sure how I felt about it yet. I refused to drink milk ever again after leaving Belgium—claiming it tasted different. I bemoaned suburban streets that led nowhere within walking distance and the lack of fresh bread on every corner. I complained about big cars and big houses. Most importantly, I felt shocked that everything wasn’t perfect. 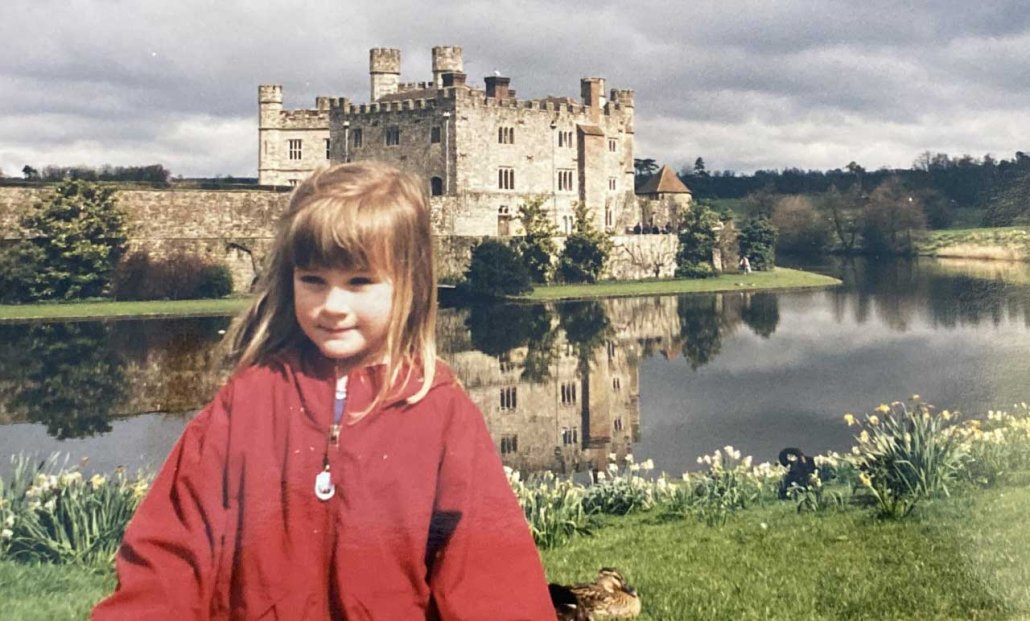 The author poses, as a child, in front of Leeds Castle in England. Photo courtesy of the author.

As excited as I had been to move “to the States,” it hadn’t occurred to me that I might feel like a stranger in what was supposed to be my home. I had expected to slide right into American life, to finally experience the land of the Stars and Stripes, apple pie, and wide-open spaces. It took a while to realize that I had left a part of my heart—and myself—behind in Belgium.

The part of me left in Belgium symbolizes the conflict between two Americas: what we want and aspire to be, and what we have yet to accomplish. Growing up in the shadow of NATO, I had pictured America as the diverse and shiny freedom-loving defender of democracy, where anyone could be anything through hard work and perseverance.

To be sure, I recognized elements of that vision throughout my new American life: in the International Night at my elementary school where my classmates highlighted their immigrant and ancestral heritages through food, fashion, and dance; in the classrooms full of the latest technology I hadn’t used in Belgium; in the recitation of the Pledge of Allegiance; in fiercely contested democratic elections that played out on-screen. I just hadn’t quite squared that with the realization that there were still flaws in the American experiment: the existence of homelessness, poverty, crime, and corruption. 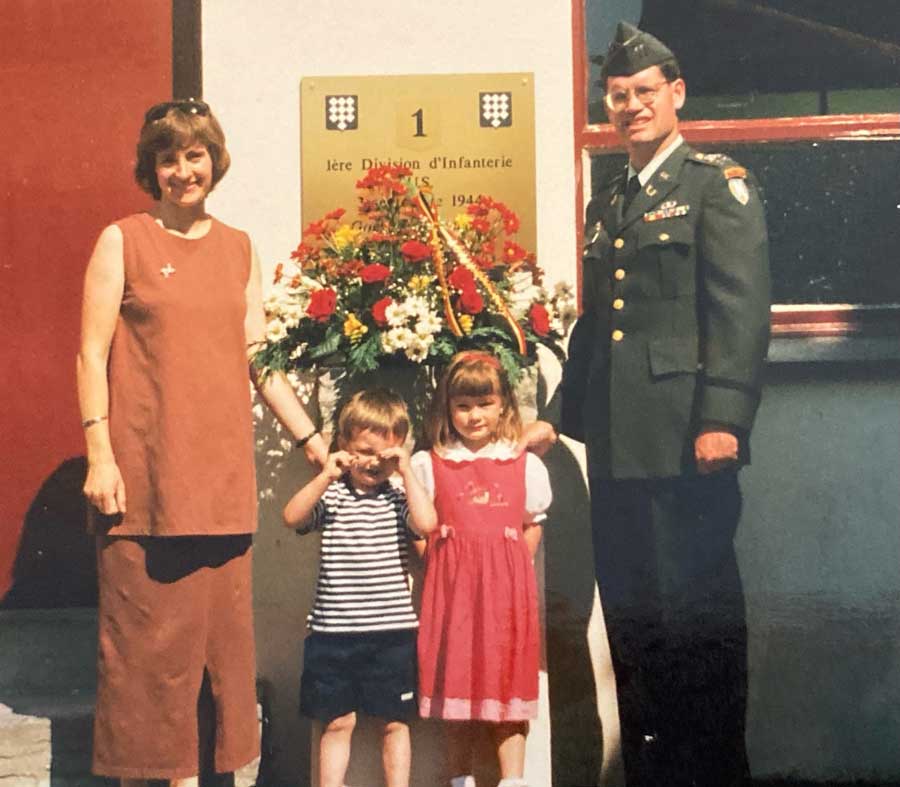 The author, third from right, with her family in Quévy, Belgium, on the anniversary of the area’s liberation from the Germans by the Allies in 1944. Photo courtesy of the author.

These realizations came over time as I got older and became more interested in the world around me. Yet when they came, I knew that the only solution to this juxtaposition between who the world thought we were and the reality was to live up to our ideals.

My formative years were spent unofficially representing the United States in a small town in Belgium. I had learned the immense soft power America enjoyed and realized the geographic reach of American culture, history, media, and politics.

After my family moved to Virginia from Belgium, nearly 15 years passed before I set off for my year abroad in college. I never felt more American than when I was living in France and traveling around Europe. I answered to “la petite américaine” from my host parents and met lots of interesting people. The perspectives of the United States that I encountered when abroad were varied—and I was reminded once again how far cultural images of the United States had spread. While I enjoyed myself immensely, returning home brought no conflict of identity. There was so much I had missed about America—most importantly, the feeling of belonging.

Much has changed since January 2000. America has been through five presidential administrations, terrorism, two lengthy wars in the Middle East, economic crises, domestic unrest, corruption, scandals, and now, a global pandemic and unprecedented stress on our democratic institutions.

I’ve changed since then too. I’ve lived abroad—twice—and come back—twice. I earned degrees and started a career I love. I’ve experienced loss and unemployment and health problems. I’ve fallen in love. In the past few years especially, my faith in American democracy, institutions, and exceptionalism has been tested over and over again—yet never broken.

Deep down, I know I am still that little girl who had been so excited to move to “the States.”

And I’ve finally found an answer to the question, “So, where are you from?”

Moving around so frequently as a child and my time living abroad as a young adult meant my feelings of “home” were not tied to a specific region, state, or city. I feel at home anywhere in a country I feel inspired to improve. The ideal America that I learned about—and observed at a distance—doesn’t exist anywhere but in my mind. It’s my home because of my commitment to the ideals that we have never fully lived up to but will always strive for.

I learned what it means to be an American by leaving it. 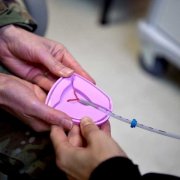 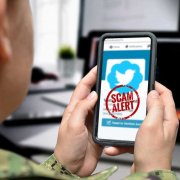 Sailing the Atlantic Ocean – 2005
“Why Are You Leaving Now?”—a Rookie Afghan Policeman, a Combat Veteran,...

“I Drew the Line at Lying to Reporters”—a Military Spokesman Calls for...
Scroll to top