The night the SEALs assassinated Osama bin Laden, I slept with a loaded pistol within arm’s reach next to my cot. Soldiers get in big trouble for keeping weapons loaded inside secure perimeters protected by concertina wire and rocket-proof barriers. I never got in trouble, though. There were no walls or wire like that between us and the Afghan village we lived in.

Although we were supposed to be living among the people, renting a building from a local, we tried our best to erect the kind of walls we thought would protect us from the village we were sent to protect. Unlike the brutal clarity of nocturnal raids focused on killing others outside the walls, our mission was to recruit local police volunteers from within the village to defend it. The army called it Village Stability Operations. It was part of the kind of foreign internal defense mission that Special Operations had been doing for decades. 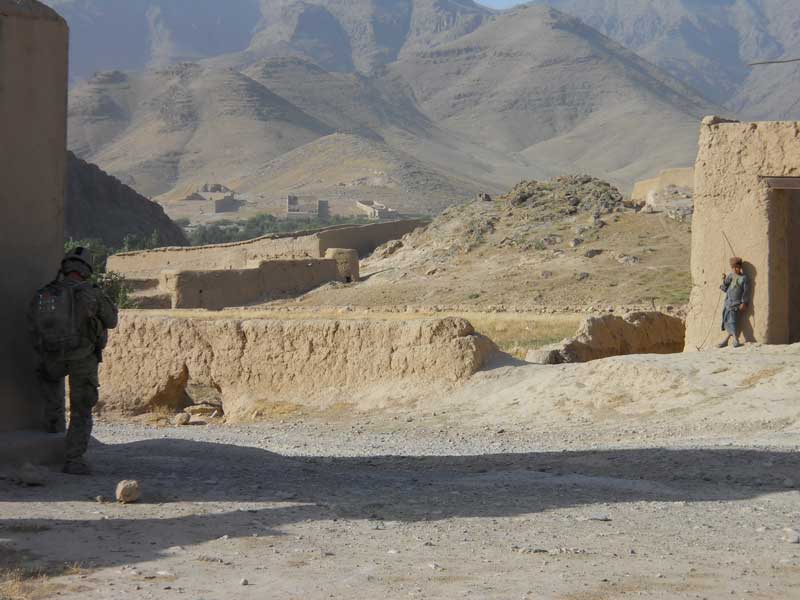 An Afghan boy and a Special Operations soldier in Uruzgan, Afghanistan. Photo courtesy of the author.

My platoon of armor crewmen weren’t Special Forces, though. We trained to fight on tanks. Instead of months of specialized training with the Operational Detachment A—the Green Berets—my platoon traded our tanker boots for a few more weeks of practicing how to move like everyone else did through Afghanistan’s mountains: on foot.

When raids came through our area at night, we were there in the morning to reckon with the aftermath. A lot of times we’d have to call our headquarters just to find out who the helicopters were looking for in the next village up the river. These good cop-bad cop tactics made us the face of whatever operations wrecked homes and kidnapped family members. Families came to us for answers we didn’t have. They assumed we knew what was happening within our own Army, though it wasn’t always the case.

Like a lot of officers, I didn’t know as much as I thought I did. So much of our training had been about moving and shooting. Almost none of it was about listening. At weekly shuras, I listened to town hall-style grievances from community leaders who had fought the Soviets and wore blue daggers tattooed on their arms to prove it. These elders questioned our motives, what we wanted, when we would leave. We said we needed their cooperation to secure their village. They let us talk. They listened.

The morning we learned of the bin Laden raid started like so many others. The coffee brewed at the end of the night shift had already been stale for hours by the time I ripped into the Army’s idea of a strawberry Pop-Tart and sat down to read the reports that flooded our inbox throughout the night. Every day the computers marked SECRET presented a fresh archive of more classified reports than anyone could ever read in a month. Rick (not his real name), the team’s intelligence sergeant, read more than any of us. 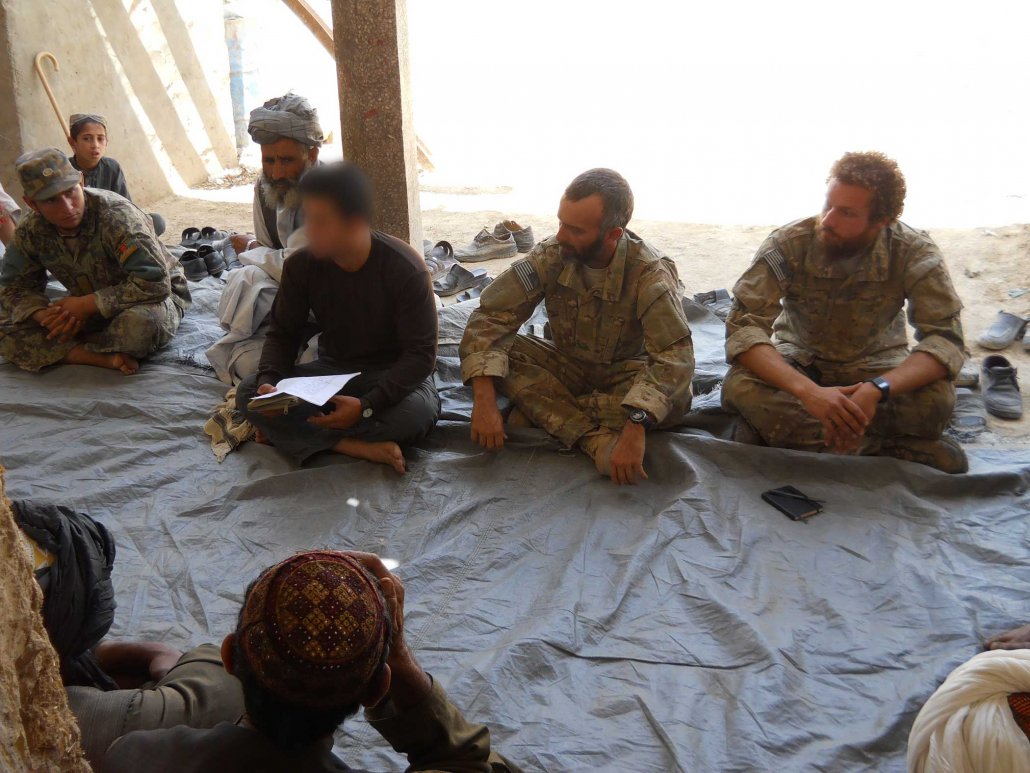 The author, far right, and a Special Operations soldier listen to Afghan leaders at a shura. Photo courtesy of the author.

Rick was the highest-ranking member for the Green Berets while their command team spent weeks at a time with district government officials at another base that was hours away. As the only officer on our camp, I was self-conscious of how little my lieutenant bar meant in Special Operations doctrine. I relied on Rick not just for information, but for guidance.

After learning of bin Laden’s death, we held a meeting for everyone in the camp, still guessing what the headlines would mean for us in the days and weeks ahead. Rick pulled me and my NCOs aside to say, “This could get real bad real quick for all of us.”

It was a Monday. Our day to meet the elders in the same mud-and-straw building that served as a town hall, a school—even a mosque depending on what time of day it was. We brought more weapons this time.

Carrying two knives from Cabela’s along with my sidearm makes me sound more desperate and pathetic than I’d like to think of myself back then. All I could think about were those stories of Soviet tankers who made sure to save at least one grenade and a bullet for themselves. I had no idea how sharing the news of America’s most wanted terrorist leader’s death might go over with men who had fired stinger missiles into Soviet Hind gunships.

While Rick and I entered the building, our soldiers surrounded it to protect everyone inside. Our interpreter, who everyone called P, hesitated in the doorway. He’d been born in Herat—Afghanistan—but raised in California and was just as out of place as any of us were in this part of Uruzgan province. The first thing that struck me, aside from the unmistakable smell of urine, was the number of men in the three-walled room we had met in so many times before. Good turnouts either meant the elders had urgent business or Taliban informants had come to hear what we had to say. Sometimes the two overlapped. Rick smiled at me before we went in. 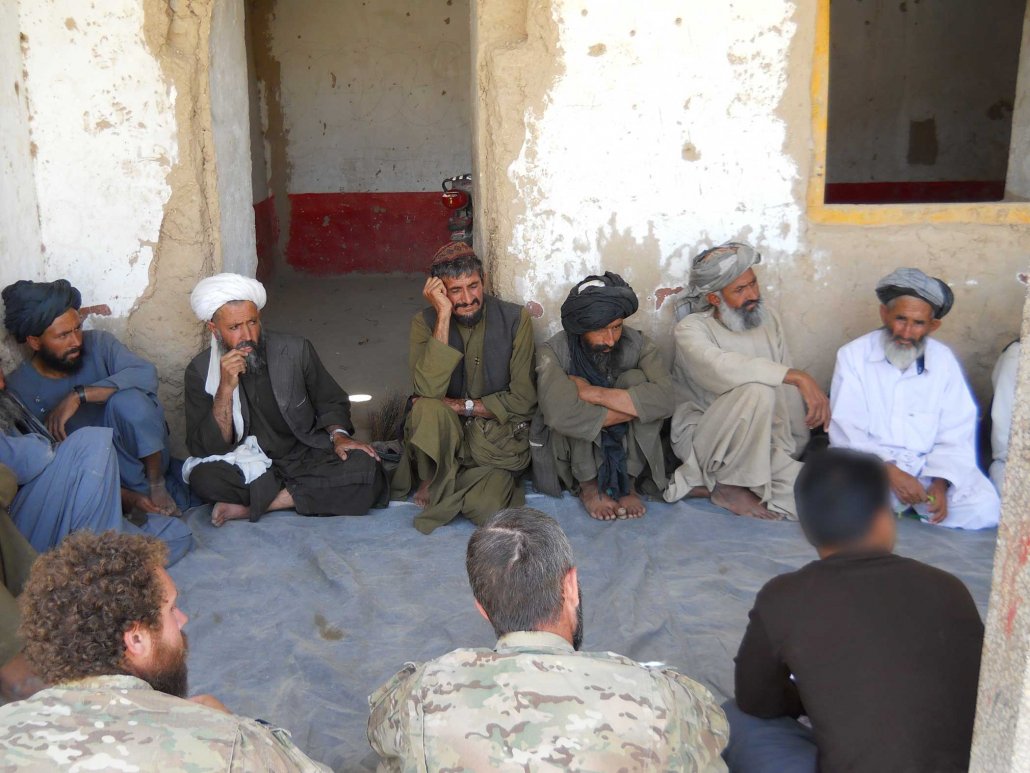 Afghan community leaders express their concerns at a shura. Photo courtesy of the author.

We crossed our legs to sit on a nylon parachute from one of our air-dropped resupplies that had found a second life as a floor mat. Without mentioning the few mission details we knew, Rick narrated a version of the raid to the old men around the circle. Rick didn’t miss a beat when one of them spit against the wall with the scratchy coughing sound a cat makes when ridding itself of fur balls.

All eyes fixed on us, waiting for P’s translation to catch up. Many shifted crimson prayer beads through their fingers or stroked beards during the silence until one of the more senior men finally rose, aided by a young boy, to tell us they already knew about bin Laden’s death. He told us how news of the raid had moved swiftly through the night by cell phones, motorcycles, and on foot to this particular village. The story had traveled over mountains, through valleys, and across arbitrary political borders at surprising speed. He had two blue-dagger tattoos I could see, maybe more under his kameez. 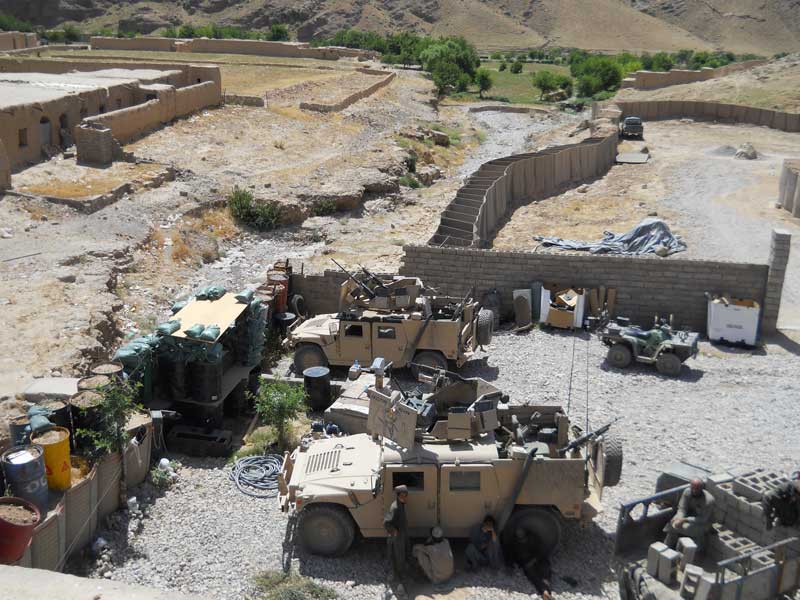 The view from inside a Special Operations camp supporting Village Stability Operations in Uruzgan, Afghanistan. Photo courtesy of the author.

One of Rick’s well-timed smiles eased the room. Haji M., the man who rose to speak first, said he was one of only three men from their village who had ever been able to leave it to make the Hajj to Mecca. He brought back stories of pilgrims from places they knew the others in the village would never see. Even without ever seeing lower Manhattan, commercial jets, or the Atlantic Ocean, the others showed real empathy for such profound loss of life. Their words were meant to console us, though most of us hadn’t been affected by the 9/11 attacks like they had been by the war we had brought to their streets.

More Afghans told us they knew the American government had been looking for the man killed in the raid for a long time. They understood why we wanted bin Laden for mass murder of innocent people in a city more than six times the size of Kabul. Though even the loss of a single life was a tragedy, they said, they also recognized revenge.

Rick and I emphasized that one man’s death changed nothing for us and the local police recruits in the village. The Americans wouldn’t be leaving. The constant patrolling through neighborhoods, nocturnal raids, and Monday shuras would continue in what had become our normalized cadence for the war. Haji M. thanked us for being honest without praising our efforts. It was the closest we’d come to understanding each other.

After the shura, only the most naïve and possibly most optimistic of my soldiers asked if we were done. If the most wanted man had finally been killed, what was left for us to do? He asked to be granted a victory none of us would ever see. His reasoning reflected our commanders’ obsession with targeting names on lists as if counting bodies of those killed, wounded, detained, or recruited for local police could turn the war into anything other than a humanitarian disaster.

Those first few nights in the village, I kept my sidearm clear, like I would have on a base surrounded by walls, until Rick insisted that keeping a round chambered was the smarter thing to do. I was still learning then, still adapting to survive a war I never understood.

Back then I thought we could make things better for people in the village. Not win exactly, because even as a cadet I’d realized what the elders knew all along. That we’d never be able to kill our way to the end of whatever the wars were becoming then.

I’d known from the cheers that went up around me at West Point when a colonel stood on a chair in a dining hall filled with cadets to announce the death of a top Al Qaeda lieutenant. Minutes later, we were back to our mashed potatoes and chicken cutlets. The hunt for all those names on all those lists continued. And it never ended. 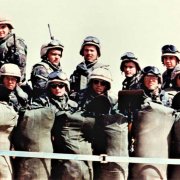 Stolen Valor Is So Grubby—Stolen for What? To Impress Who?
“Lost Trust and Confidence” — How the Military Covers Up Officer Misconduct...

For an “Afghan Hand,” Explosions and Crashes Echo Loss and “a Romanticized...
Scroll to top