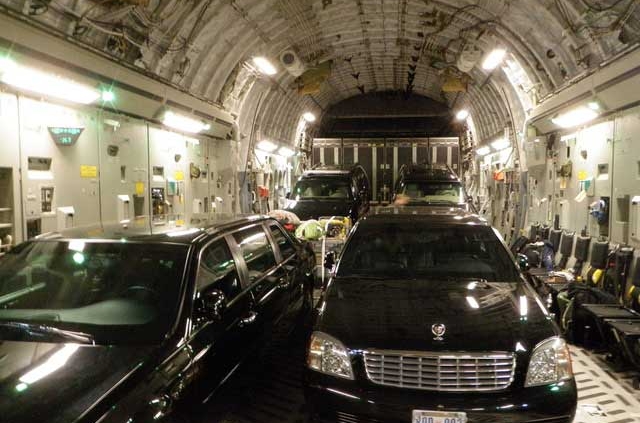 The first time I fly a C-17 into China the only cargo they have for us is a single forklift.

“That’s it?” our loadmaster asks the American ground crew.

“That’s it,” confirms the colonel running global operations out of Tanker Airlift Control Center at Scott Air Force Base. “Seems like a waste to me, too, guys,” he sympathizes over satellite phone. “But the mission planners say that’s all the cargo there is for now, and you can’t stay overnight in China. Just head back to Yokota—we’ll have more cargo for you tomorrow.”

I stand in the cargo compartment, arms crossed, staring at the forklift that was somehow an integral part of the vice president’s week-long trip to China but, despite the VP still being in-country, is no longer needed. I walk a lap around the dark-green forklift with “Property of the U.S. Government” stenciled on both sides in black letters. It doesn’t seem to be a particularly special forklift, at least as far as I can tell. It’s not big. Definitely not a hauling-10,000-pounds-of-concrete-barriers-around-a-construction-site type of forklift. More like a hauling-10-cans-of-refried-beans-down-the-aisle-of-a-Costco type of forklift. 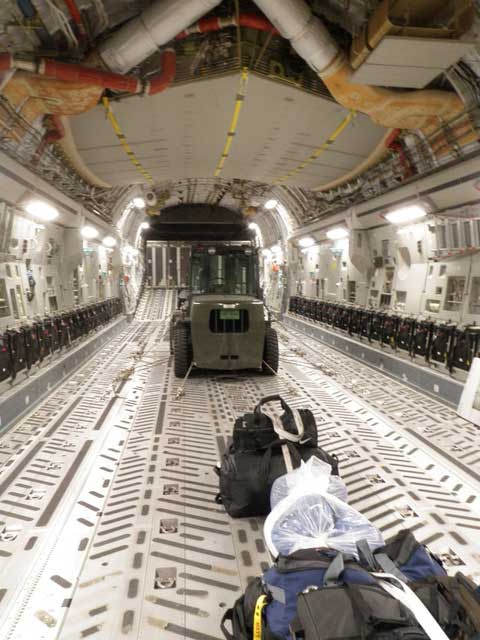 A lone forklift in the back of a C-17. Photo courtesy of the author.

You might be wondering how many forklifts a C-17 can carry. Probably five of the former, maybe a dozen of the latter? Not really sure. If Costcos had airfields attached to them, I could probably pin down a better number for you. The point is, we’re capable of carrying a hell of a lot more than one small forklift.

We do what we’re told and carry one-twelfth of what we’re capable of carrying six hours back to Japan, burning enough gas money to buy a dozen brand-new, identical forklifts. As was fashionable in 2011, somebody on the crew sarcastically blames President Obama. I roll my eyes, not because I like Obama (I do) but because it’s a tired and unfunny joke.

We land back in Japan and unload the forklift. We watch it drive away and wonder where it will end up. Eventually flown back to the States? Parked in a hangar somewhere here on base? Lost and forgotten in the global cargo system? Whatever. We go get beers and sushi and more beers, and sleep.

Twenty-four hours later, we’re back on the ramp in Beijing and Vice President Biden’s motorcade appears out of the smog. Limousines and Suburbans, black and chrome, heavy and serious. Ten vehicles driven by Secret Service agents who just dropped off Vice President Biden at a different plane—a much more comfortable, blue-and-white-painted 757—somewhere else at the airport. The first five vehicles peel off and line up behind the C-17 parked next to us; the second five line up behind us. It’s quick and efficient and almost looks choreographed. They’ve been here, they’ve done this before. Wherever the president or vice president goes, they go. Wherever they go, we go.

At the loadmaster’s direction they drive—slowly, one at a time—onto the plane. A second loadmaster drags heavy chains across the cargo floor and deposits them next to the wheels of each vehicle. The Secret Service agents fight for the good seats along the sidewall of the cargo compartment—the ones not directly below an air vent, the ones closest to a power outlet. They ask why the lavatory already smells bad, why isn’t there more drinking water, why isn’t the A/C colder, why haven’t we started the engines yet. 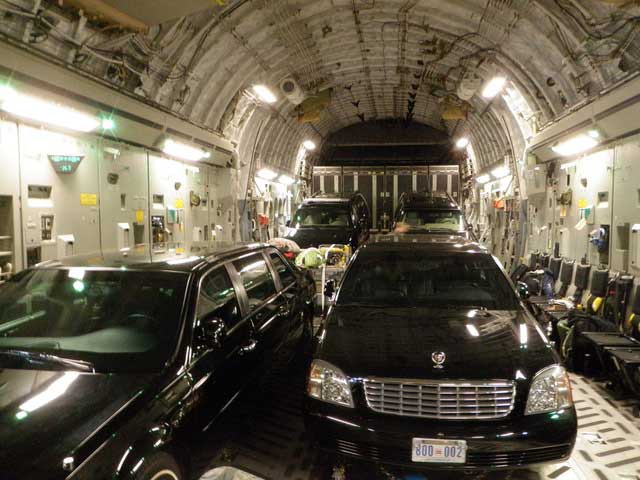 Former Vice President Joe Biden’s limousine in the back of C-17 airplane in August 2011. Photo courtesy of the author.

They’ve been here, they’ve done this before.

I ask if I can see the inside of one of the limos. They shrug their shoulders and say sure.

The door is thick and heavy. I’m surprised how worn the leather seats look. One of the other pilots asks about the environmental system of the limo—he heard it’s completely self-contained and can rapidly filter bad air out or keep outside air from getting in.

That’s super cool, I think. I bet it never smells like fart in there.

Then I remember I have to fly a plane full of Secret Service agents and the vice president’s limos back to Japan, so I walk up to the cockpit and get to work.

We make it to Yokota and walk off the jet, leaving the cargo and passengers behind. We high-five a different crew as they walk out to the jet, ready to fly all the way back to Andrews Air Force Base in Maryland. When their job is done and it’s time to get back to D.C., the Secret Service flies direct, only stopping for gas, maybe pizza, and a fresh aircrew.

We shower then get beers and ramen and more beers. We make plans to go to a baseball game at the Tokyo Dome the next day. Not a bad day’s work.

Seven years later I’m descending into Quito, Ecuador. We punch through a layer of clouds and fall into a beautiful bowl of a valley. Mountains slope lazily up on all sides; a deep canyon cuts the ground just short of the single long runway and wraps around one side of the airport.

We’re on final, about 10 miles out, when we hear Air Force Two take off with Vice President Pence onboard. We touch down two minutes later. The timing is dumb luck but I bet from the ground it looks like the U.S. government totally has their shit together. We taxi to parking and kill the engines. Then we wait.

We admire the mountains. We enjoy the temperature, a cool 68 degrees. We wait some more. We never wander far from the jet. Quito, Ecuador—another place I can tell my grandkids I’ve “been” to. As is fashionable in 2018, someone on the crew makes a joke where they take the phrase, “Make America Great Again” and substitute America for something else. I roll my eyes, not because I like Pence and the president (I don’t) but because it’s a tired and unfunny joke. The Secret Service agents finally show up with their limos and Suburbans and questions. We load up and take off. This time we’re the ones to fly everything back to Andrews Air Force Base. 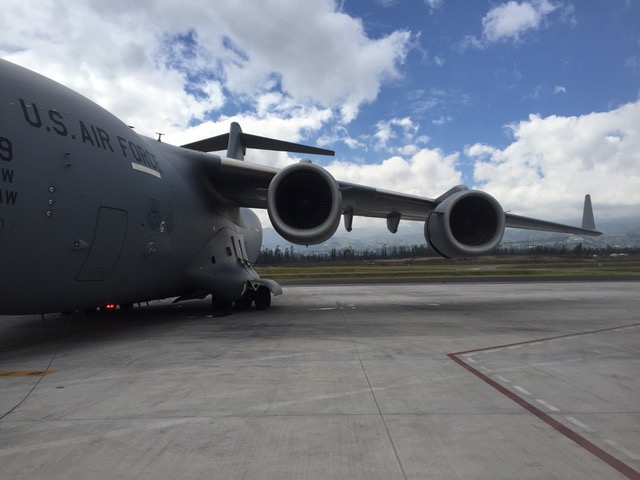 We land in America, download the cargo, then waste four hours trying to find a hotel with eight empty rooms. We finally find a Hilton Garden Inn in Arlington and pass out at 3 a.m. only to rally in the lobby four hours later. One of the pilots has a friend who works at the White House and got us on the list to take the tour. We pile into Ubers and head to the White House, still half asleep.

Outside the White House we stand in line with several families, a Boy Scout troop, a few high school classes. We look out of place. Red eyes and stubble, cargo shorts and flip-flops—like a hungover club hockey team in town for a weekend tournament.

Inside the White House we see rooms named after colors and cardinal directions. It’s fun but anticlimactic. We don’t see anything we recognize. Afterward, the friend who set up the tour meets us and gives us a semiprivate tour of the Eisenhower Executive Office Building that sits next door to the White House. We see more rooms with high ceilings, ugly carpet, and dark wainscoting. We get free chocolate treats that were packaged to be served on Air Force One. We step out a side entrance and a narrow alley is all that separates us from the White House—a part of the White House that regular people don’t get to tour. We stand in the sun, look, and watch. Security guards stand in front of a door; they look like they’re waiting for someone. One of the pilots takes a few pictures. It’s getting hot and I turn to go back inside. Our tour guide says to wait. I’m about to ask what for, but, raising a hand and pointing, he cuts me off. We watch as a very familiar-looking limousine pulls up to the White House and parks.

He takes two steps then turns, offers us a stiff, motionless wave and a grimace that, I guess, is supposed to be a smile.

I don’t wave back.

He has no idea who we are, no clue that we just flew his limousine and Secret Service team back from Ecuador. I’m sure if he knew, he’d thank us for our service, maybe give us a coin or something. We laugh, a few guys wave back, the vice president disappears into the White House. We finish our tour.

Afterward, we walk around the mall, then get tacos and bloody marys. We talk about all the great things there are to do in the nation’s capital while we spend four hours getting day-drunk in the corner of a dark bar, then go back to the Hilton Garden Inn and pass out.

Except I can’t sleep. I lay in bed, head spinning, thinking about my job.

To Prepare for War, Dubbed Disney Classics and a Detour to the “Wild&nbsp...
Scroll to top