We all have stories. After all, we didn’t just watch history, we made it.

We lost friends. We saw heroes. Some of us were heroes. We knew sacrifice and pain and sometimes we saw God at the strangest times.

Many of us carry a heavy burden and all of us recognize and respect that. Some need distance and others a hug. We will wait as long as it takes for that to be sorted out, because we will never leave a brother or sister behind.

Most Americans cannot imagine the stories we have. They have no grasp of the nature of things in uniform. That is not their fault. The constant daily threat of chaos that comes from service is not for everyone. 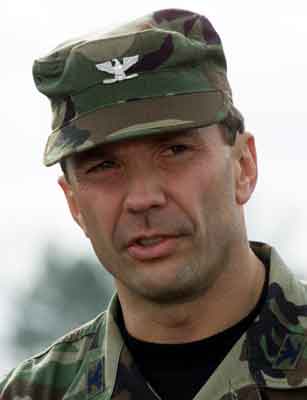 Col. Dan Woodward speaks to the media on the recovery of an Air Force C-23 Sherpa that went down in Unadilla, Georgia, on March 4, 2001, killing all 21 on board. Woodward served as the on-scene commander. Reuters/Alamy stock photo

This story, though, is not about burden. It is about inspiration. Inspiration that I wouldn’t trade for a life with more money and fame. In fact, given the chance to live my life again, I would take that bargain in an instant, not because I want to change things, but because I want to relive them.

Inspiration abounds, and in uniform, it is everywhere, every day, because every day we do things of consequence for our nation. We serve something greater than ourselves. We live lives devoted to each other and to values and principles that yield a life worth living, and we know camaraderie that is so powerful, so intense, so ingrained that, once felt, it defines us.

Soaked Georgia clay will suck you in like quicksand and hold you like glue. Put a cold north wind on it at 20 knots and you will soon have something that dries like concrete.

I arrived at the gym on that particular Saturday morning as they boarded the aircraft. About the time I took my first drink from the water fountain, the aircrew was running preflight checks. Bags were loaded, equipment stowed, airmen and soldiers strapped in. Props soon turned, and off they went.

An hour later, they were gone, falling from 10,000 feet into that clay, their aircraft torn to pieces by a thunderstorm that spat aircraft parts for miles in every direction like a medieval monster. Twenty-one men. Dads, sons, brothers, uncles, nephews … gone.

One hour to the north, their families waited in the squadron, gradually sliding from concern to confusion to the blackness of eternity that swallowed them whole, their dreams traumatically severed from their lives.

A plowed, gradually sloping acre now held 21 Americans that we would never leave. There had been violence here, but this was now hallowed ground and these were our brothers.

My team immediately brought me to the site. The “light alls” on the dirt road above only dimly illuminated the aircraft, so I needed to get close and examine things with flashlights. The shadows danced as the lights moved across the fuselage and other pieces of the aircraft, causing the whole thing to move. At one point, a master sergeant next to me leaned in and said, “Do you know what you are looking at?” I did. 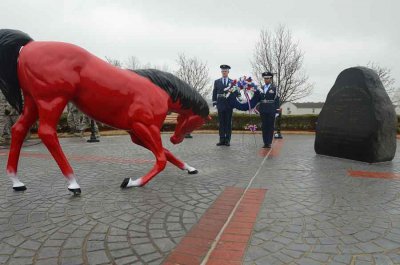 The Virginia Air National Guard’s Virginia Beach-based 203rd Red Horse Squadron holds a memorial service March 3, 2014, at Camp Pendleton to honor 18 unit members and three Florida Army Guard aviators killed on that day in 2001 when the C-23 Sherpa they were flying in crashed in a cotton field near Unadilla, Georgia. The 203rd members were returning home after completing a two-week military construction project at Hurlburt Field, Florida. Photo by Master Sgt. A.J. Coyne, courtesy of the Virginia National Guard.

Over the next 10 hours, we established communications with the Air Force and Army watches in the Pentagon, transmitted a mountain of logistics and supply orders to our home base some 30 miles to the north, dealt with local and state police, an unbelievable arriving media crush, and preparations for what would soon become a camp for 200 personnel.

At 10 a.m., I boarded the search and recovery team bus and briefed them on the crash site and the mission they had before them. It would be complicated. There were hazards. The enormity of the things they would see, smell, and touch would stay with them for a lifetime. I told them they could leave and one did. But the others stayed, staring at me stoically. Among them was an airman first class who, six months before, had been in high school. She didn’t flinch.

Later that day, I returned to the crash site where recovery operations were in full swing. The extraordinary effort to respect the dignity and honor of the Americans that we would return to their families was everywhere. In the middle of it all was that 18-year-old airman first class. She still didn’t flinch. I did.

Screens on posts were stationed near the site, where recovery team members meticulously collected and cataloged the location of personal effects by gently screening piles of dirt and clay. Dog tags, belt buckles, a coin, keys, watches scratched and frozen at the precise time eternity knocked, rings, wallets, shoes, a small stuffed bear, photos—yes, the photos of those now gently cradled by God—were all there.

We covered our upper lips with Vicks to mask the smell and walked awkwardly in white protective coveralls, boots, gloves, and masks across this field of concrete. The bitter-cold wind blew relentlessly from the north. There was no idle chatter. There was only the mission.

I returned to our makeshift command post and learned that communications would no longer be a problem. The regional phone carrier had sent a team to the site that Sunday and linked a local phone line to our command post.

We needed supplies more quickly than our own logistics process could make happen, and I learned that the owner of the local hardware store had given us his keys, asking only that we leave a note so he would know what we took. 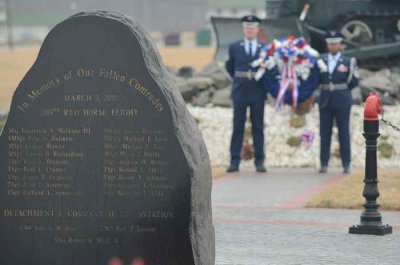 I learned that community members were arriving routinely, bringing food, blankets, and other things and leaving them at our perimeter, along with prayers.

After receiving my update, I stepped out and headed for the senior Army officer on-site when my public affairs officer almost tore my shoulder from its socket.

“What?” I exclaimed. “You cannot be serious.”

“There,” she said as she spun around and pointed. “There. He is a son and apparently graduated from basic on Friday and detoured here from his trip home.”

“My God,” I said. “Get me a chaplain and first shirt now, and brief them on the way back.”

I headed for this man. He was cleared through our first perimeter because he had a military ID, but was stopped at our second. Now, he stood at the entrance of our command post, clearly wondering what to do next.

As I approached, I held out my hand. “I am Dan Woodward and I am the on-scene commander. I understand you are a family member, is that right?”

“I understand,” I said, my eyes never leaving his. It was, of course, my imagination, but in his eyes I saw his first steps, the joy of his first words, the games of catch, the first bike ride, the first date, and the ever-present touch of his dad’s hand. I knew those were the memories that must prevail.

“I understand,” I said. “You know, we never left your dad. From the moment we arrived, we have been with him. Now, you need to let us do our job and bring him home to you. There is no reason to go to the crash. We are taking care of him. Let the memories you have be the memories you keep.”

Even with this short talk, he seemed persuaded and I managed to exhale for the first time in three minutes. He paused and looked down and then back and said, “Yes, sir.” I don’t think he ever really wanted to see the crash, but he needed to do something, and this was it. 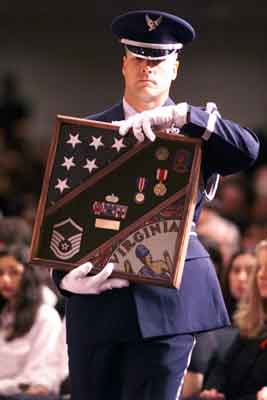 An Air Force Honor Guard member carries a shadow box to be placed in front of a memorial for one of the 21 victims killed in a March 3, 2001, C-23 Sherpa plane crash in Unadilla, Georgia. The 18 airmen killed were assigned to the 203rd Red Horse Flight at Camp Pendleton State Military Reservation in Virginia Beach, Virginia, and were returning from temporary duty at Hurlburt Field, Florida. The three soldiers were assigned to the 171st Aviation Battalion at Lakeland, Florida. Photo courtesy of the Virginia National Guard.

About that time, a chaplain arrived with our first sergeant, and I introduced the airman to them. I asked the chaplain to talk with him, and I asked the shirt to take care of him as one of our own. They did. He was our brother and we would not leave him alone in this time. We drove him home.

Twelve hours later, after leaving for some rest, I drove back to the site, speechless:  Dozens of homes along the main street lined the road with 21 small American flags on sticks in their front yards. Every member of our team would pass these homes at some point. These were good people.

That day, we recovered the last of the 21 airmen and soldiers, placing them in a refrigerated transport vehicle with an American flag draped across the hood. These Americans were headed home, and as the vehicle began to move, the entire camp came to a halt and rendered a solemn salute. Two hundred men and women lined the path, bonded by honor, respect, and the values that provided them with a life compass that would never fail them.

Twenty-two years later, the memories are still vivid. I know the families still grieve. I met with many of them. I will always remember them.

But I will also remember all the places where the greatness of the American spirit prevailed. Honor, camaraderie, generosity, courage, dedication, devotion, respect, teamwork. They were present everywhere during those days.

Today, hanging in the breeze around this hallowed field, I know the weight of history resides. I would give anything to alter that history. But I also know that God will eventually grant me the serenity to accept those things that I cannot change. I cannot change this thing.

What I can do is remember the inspiration that surrounded me during those days. I can say with certainty that if offered additional fame or fortune to live a different life I would decline because inspiration from those around me abounded in the life that I have lived.