Arlington National Cemetery rests on 639 acres overlooking the Nation’s Capital from the south side of the Potomac River. For many of the more than three million visitors every year, it is one more tour stop between the White House and the Smithsonian museums. But for the many veterans and the families of the fallen, Arlington is sacred. Comrades reflect on what happened and families ruminate on what might have been with terrible finality. The ground is sown with tears.

It is a special place for me, though there isn’t one salient reason that signifies why. 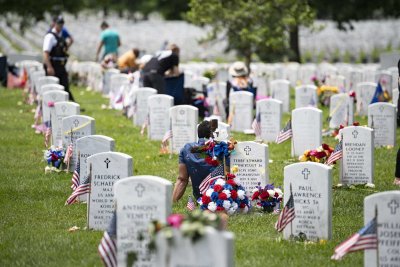 I can share moments of quietude, identify and understand the feeling of loss with the living, and perhaps lend some positive energy, too. Among the people buried there, I know many of them personally. Others I knew by reputation.

Starting on Eisenhower Drive a short distance from the McClellan Gate (an ironically large monument to a U.S. general who was physically small in stature) and walking on York Drive toward Interstate 395, the dead of modern wars, along with the odd veteran from an earlier conflict, share a small area known as Section 60. They rest together, these disparate generations, due to a lack of available space: Arlington is running out of it. Being buried there takes on its own significance.

I had the honor of knowing so many friends and people buried in Section 60 that visiting them takes an entire afternoon. I recently reflected on a visit I took with my daughter a few years ago on a winter day. She grew up with me being a U.S. Marine. It is all she knows of me.

Now she is a grown woman, serving as a soldier.

“Ready?” I asked on that cloudy, cold day as we faced graves as far as we could see.

We walked together through the rows of headstones, stark white against the drab of winter grass. It felt different for us to be there together since we had both served on active duty. She was no longer a child. And as an Army officer, I thought, she may deal, as we walk, with the same emotions I have. I wanted her to understand my perspective. 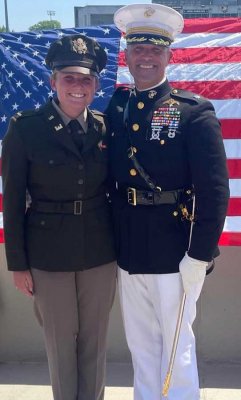 Ivan Ingraham, right, poses with his daughter Allison at her commissioning ceremony in May. Photo courtesy of the author.

Going there drains me emotionally. I carry baggage that must be unpacked. A memory. A debt of gratitude. Survivor’s guilt. I don’t get to choose what I bring since my feelings are uniquely linked to the names I see. As I walk, however, those emotions and thoughts flow through me into the ground. After I visit, I find myself calmer, as if I released some negative energy and received something positive in return. I experience a rebirth of sorts, like the turning of the seasons.

Gunnery Sgt. Javier Obleas was the first funeral for a person whom I knew. He was a force reconnaissance Marine and considered an exemplary Marine staff noncommissioned officer. He died in Iraq in 2004. His funeral was on a bitterly cold December day. I remember his little girl squirming to get away during the graveside ceremony, her bright pink coat juxtaposed against somber black wool coats and dress uniforms. Her playfully walking around as only a three-year-old can broke my heart.

Chief Special Warfare Operator (SEAL) Nicolas Checque died in Afghanistan in December 2012. Nic was selfless to the end. I learned of his death while I was serving overseas and couldn’t attend his funeral due to my deployment. After I returned in March 2013, it took months for me to bring myself to visit his grave because I just couldn’t reconcile with his passing.

One summer afternoon, I visited Arlington alone. I saw a car parked on the side of York Drive. Family. Tourists are not allowed to drive through the cemetery. There were few people in Section 60 that day. The air was warm, and aside from light road noise from the interstate, it was quiet save for a gentle breeze that rustled the large green leaves of the oak trees that line the road. I turned into one of the rows of headstones and heard gentle sobbing. A young woman—I assume a wife—prettily attired, had set up a picnic on a blanket in front of her young husband’s grave. She lay on her side visiting with him, gazing at the headstone, attempting to make sense of why she had to be there at all. Giving her space, I quietly continued my walk, allowing her moment to remain uninterrupted.

Summer reminded me of old friends.

Maj. Doug Zembiec, known as the “Lion of Fallujah,” was killed while serving in Iraq in May 2007. His funeral was one of the largest I ever attended, and it made the front page of The Washington Post. I was a member of his sword arch at his wedding and one of his pallbearers at his funeral. When the Honor Guard fired their 21-gun salute, I jumped as tears rolled freely down my face, the gunfire signaling he was really gone. I still have a brass shell casing from that day. 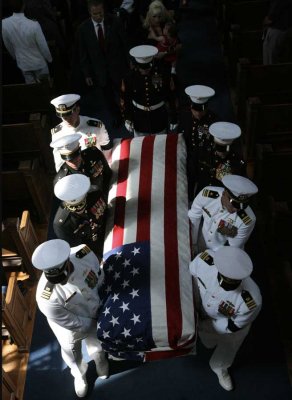 Marine and Navy officers carry Maj. Douglas Zembiec from the U.S. Naval Academy Chapel in Annapolis, Md., after a service in his honor in 2007. Ivan Ingraham, third officer back on the right side, was a member of the sword arch at Zembiec’s wedding and served as a pallbearer at his funeral. Photo by Gunnery Sgt. Mark Oliva, courtesy of the U.S. Marine Corps.

Master Sgt. Scott Koppenhafer was one of my Marines when I commanded a Marine Special Operations company. We were not serving directly together when he died in August 2019, fighting in a small, unknown area of Iraq while leading surrogate partners. Scott had a quick, dry wit. Always ready to lighten the mood with a joke, he was a stalwart member of his team and an accomplished Marine. His graveside service was deliberately small and private per his family’s wishes.

Section 60 is most peaceful for me in the fall. I stroll along the neat rows on manicured grass covered with vibrant leaves, breathing the cool air. I am lucky. I have my present and future because of those I walk among, like Gunnery Sgt. George Figone, who died in November 2011 as a result of medical complications. He was buried on a windswept, rainy day. The commanding general of Marine Forces Special Operations Command and my family, among others, attended his ceremony. My children hadn’t been to a military funeral, and I felt honoring a fallen warrior was something they should understand to make them better citizens.

This year, I ended a 24-year Marine Corps career. I visited Arlington again and thanked those who allowed me that opportunity. 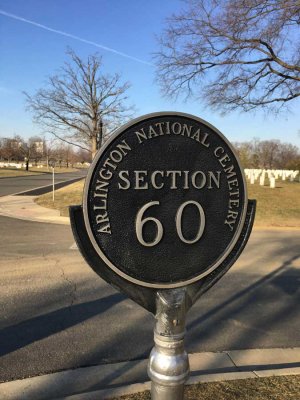 A sign marks Section 60, the area of Arlington National Cemetery known for its veterans of post-9/11 conflicts. Photo courtesy of the author.

Unlike the others I’ve mentioned, I did not know Sgt. Nicole Gee. As a Marine, she desired nothing more than to deploy and make a difference. She was one of the final 13 servicemembers killed in Afghanistan by a suicide bomber in August 2021. Her mother summarized the sentiments of all the mothers of those who have died by saying, “My baby is gone.” Nicole represents the best of our young service members who wanted to be part of something bigger than themselves.

From privates to presidents, more than 400,000 people are interred in Arlington, most from our nation’s wars. It is the last place of repose for my friends and fellow service members. They did an enormous amount in their lives to earn the right to be buried here. They are worth a moment of thanks, as I think of what they might have continued to achieve.

I am sure any person familiar with Section 60 would be able to substitute any number of names for the people I listed. While Arlington is the final resting place of famous people such as President John F. Kennedy, Medal of Honor recipient Maj. Audie Murphy, and Lt. Gen. John A. Lejeune, it is the soldiers, airmen, sailors, coast guardsmen, and Marines buried alongside them that predominate. I encourage people to go to Section 60 and reflect upon the simple headstones. Each person buried there is unique. Each hero was somebody’s child.

I hope that one day I might join them. It would be an honor. 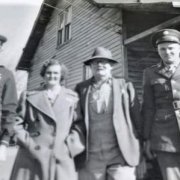 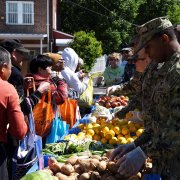 Are Service Members Heroes, Victims, or Villains? You decide.

Less Than a Year After 9/11, She Fell in Love With a Marine
The Threat of War Is Shifting, and We Intend to Win. But It Will Come at a ...