The alarms had gone off—again—at Cement City near Dammam, Saudi Arabia, in late January. The air war had just begun, and we’d spent the day filling sandbags and digging a hole, the wet sand leaching all moisture from our frozen fingers.

The Scud missile alerts seemed eternal, but so far, only one soldier, Sgt. Tracy Hampton, had been lost at Cement City: The water-logged sandbags of a foxhole had collapsed on him.

The war—our portion of it—would not start for another month. In the meantime, we watched our planes fly overhead, brighter stars by night and great looming wings by day, and we cheered. We waited for Saddam Hussein to give up as the Air Force annihilated his bases, his air force, his command center. 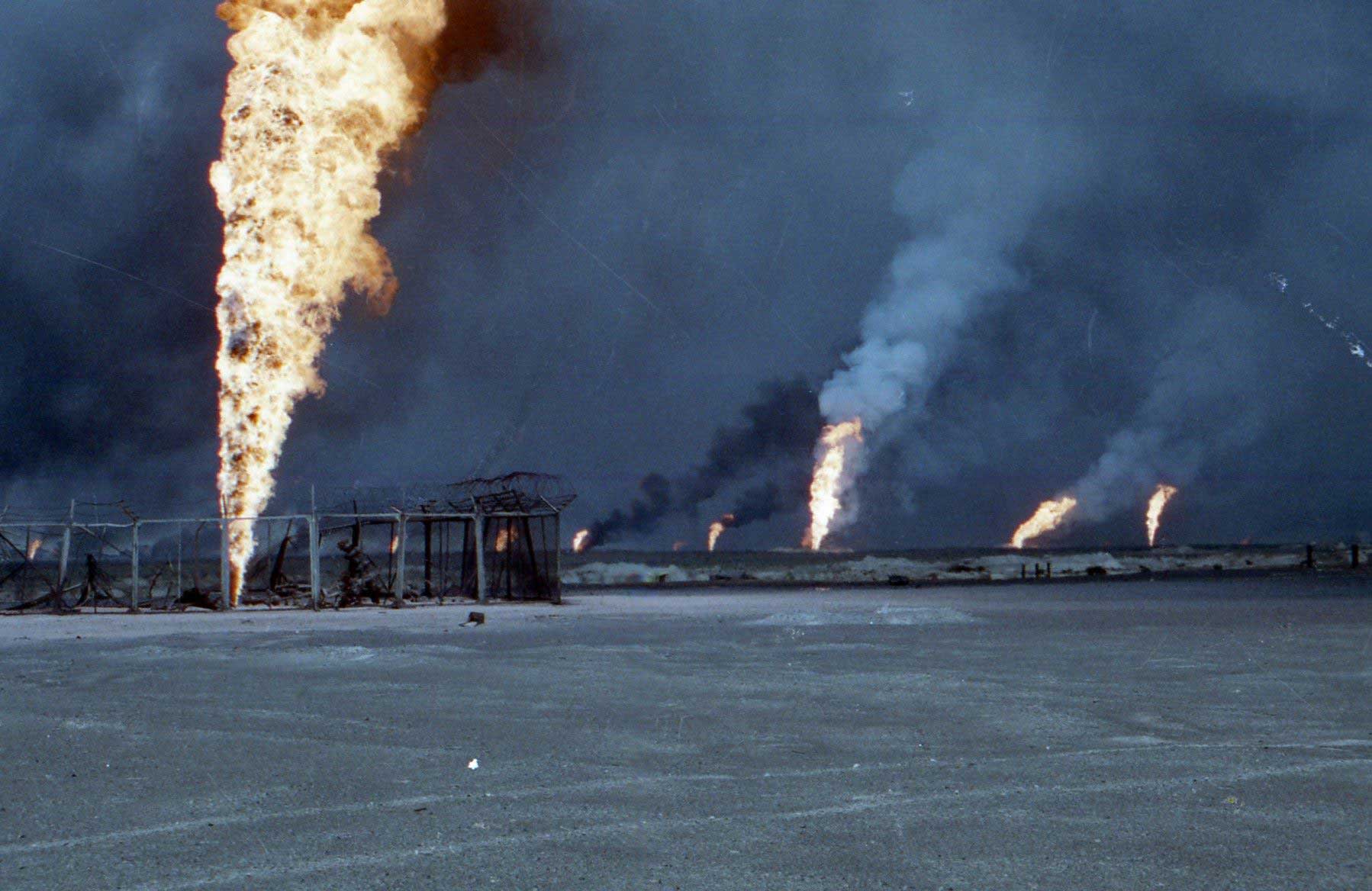 Oil wells in Kuwait fill the midday sky with smoke. Iraqi President Saddam Hussein’s troops lit 650 wells on fire as they retreated, causing a crisis as Kuwait worked for nine months to put them out. Photo courtesy of the author.

When he did not, we wondered what he had that we didn’t know about. Sarin? Weapons and warriors from foreign countries? We had heard rumors, always rumors, of ditches he planned to fill with oil and light aflame. The Saddam Line. With the fire would come a mist of poisonous gas. We imagined crawling through barbed wire, coughing, to the flame-filled trench and … what? We didn’t know. “They” didn’t tell us.

We knew one out of four of us was expected to die—the news alerts streamed constantly during CNN’s brand-new 24-hour coverage as we prepared to deploy. On the front lines, letters from home and Stars and Stripes filled in the blanks.

The Scuds could contain chemicals, we were told. We tried not to think about it and crashed, exhausted, after creating a shelter that we knew would do little in the case of nerve agents.

In the deep early morning, still cocooned in an extreme-cold-weather sleeping bag, I heard the alert.

We had left McNair Kaserne in Frankfurt on Christmas Eve—long after the volleyball games in 100-degree heat and full MOPP meant to acclimate the troops to the weather. But we’d known for months we were coming, so we practiced donning our gas masks in nine seconds and learned how to tie the weird black chemical-protection booties over our combat boots. 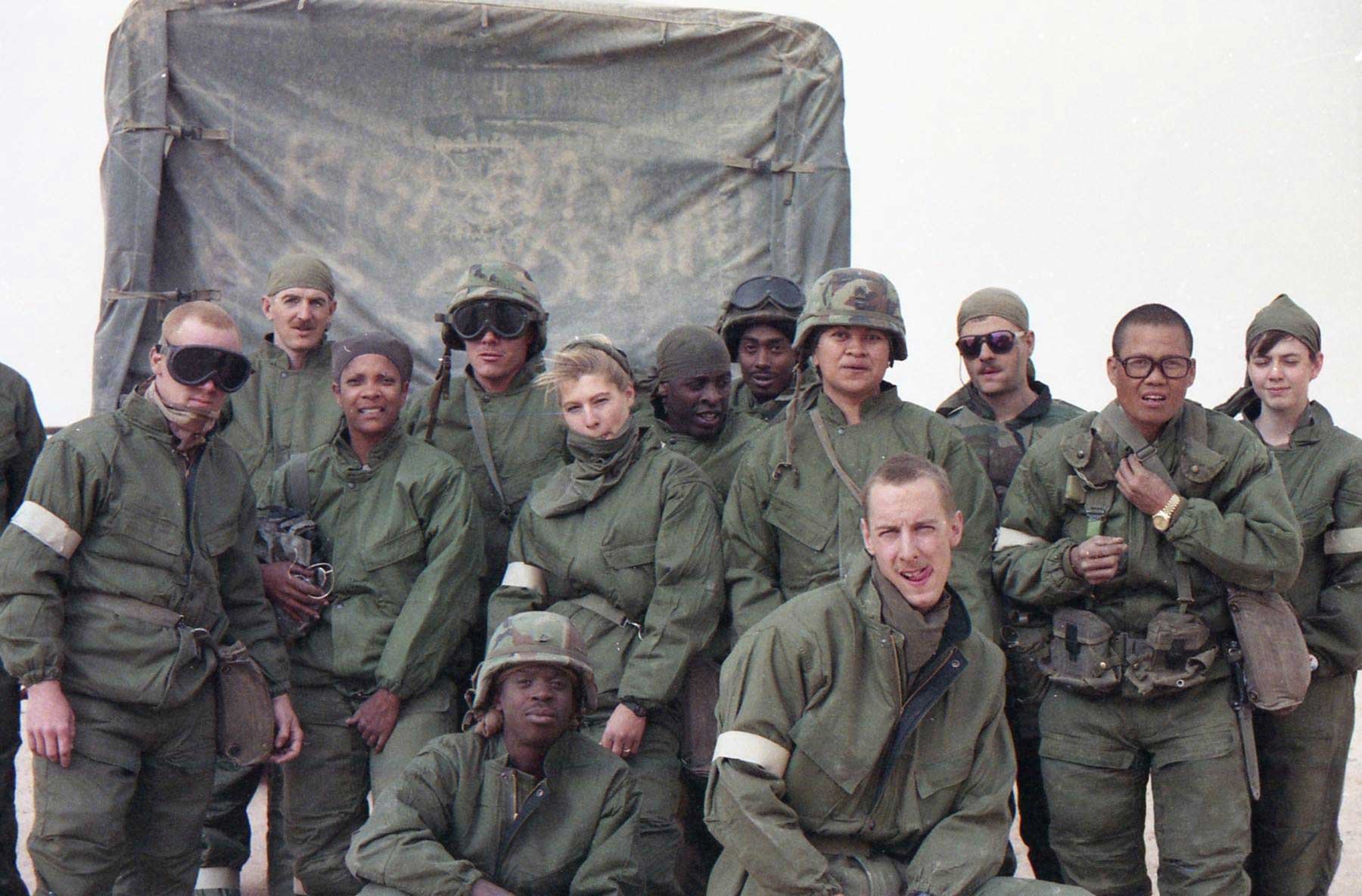 Soldiers, including the author (far right back row), from the 17th Signal Battalion pose in MOPP gear during the ground war. Photo courtesy of the author.

We were the first to train on the Army’s Mobile Subscriber Equipment, and we would hopscotch across the desert, ensconced within the 3rd Armored Division’s “V” formation, to set up radios and antennas to provide satellite phone communications to the commanders.

(Ask my mother to tell you about the time I called her for a 15-second chat—“Mom! Mom! I’m in the middle of a minefield in Kuwait!”—before the line went dead.)

My (ex) husband dropped me off at the gym, stacked my duffle in the corner with the others, and said he’d be back in the morning to pick me up. This was a drill; they would obviously send him before me.

A month later, I ripped my mask from its case and dragged it over my head without rubbing the sleep from my eyes, grabbed my MOPP suit in its crackly plastic bag, and made my way to the foxhole with my team, tripping over tent ropes in the dark.

We were not supposed to open the suits until we knew it was a real attack—that the sensors had detected chemicals.

I didn’t have a lot of faith in the MOPP suit: The plastic bag proclaimed that it had expired two years earlier, just like most of our MREs. I didn’t have much faith in my mask, either. 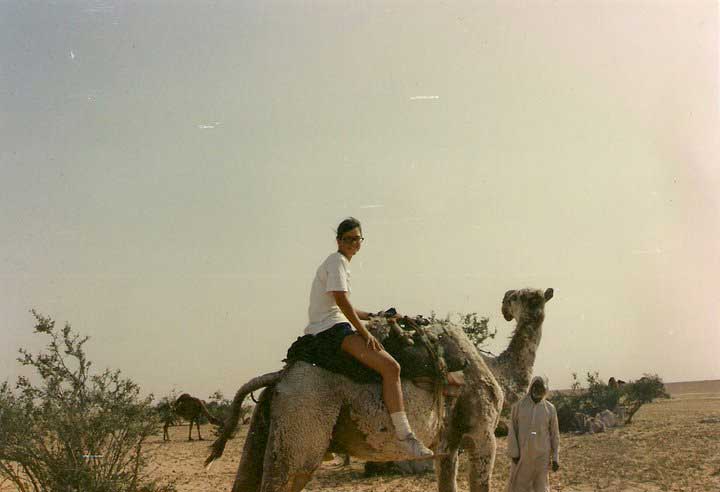 Kelly Kennedy rides a camel after running into a herd of them somewhere in the desert after Desert Storm ended. Photo courtesy of the author.

On the civilian flight to Saudi Arabia, we had tucked our weapons and our masks under our seats and promptly fallen asleep. When I awoke, my extra-small gas mask was gone. The Army had to special-order hats for my pea-sized head. My helmet always tipped to one side because I couldn’t tighten the harness inside to fit me.

On the black market, an extra-small mask was child-sized. They were hard to come by. They were valuable. I will never know which of my battle buddies stole mine.

“Do we need to send you to mental health?” he asked.

I don’t need to go to mental health. I need a mask that fits. 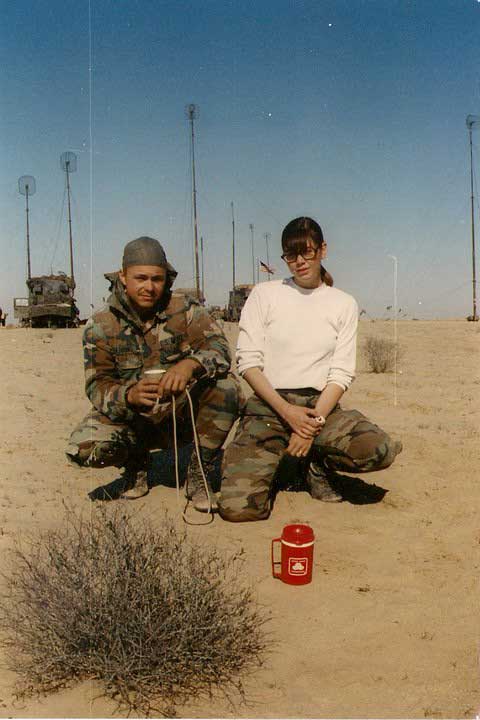 Spc. Dwayne Herring and PFC Kelly Kennedy pose in front of a communications node center somewhere in the Persian Gulf. Photo courtesy of the author.

In Cement City, the NBC NCO wove my hair into a French braid so tight it pulled back my ears. “Keep it like that,” she said, tugging the straps of my new size-small mask like a corset, the rubber gaping between the elastic bands. She wafted a tiny bottle of banana oil beneath the nose of the mask to test the seal.

I could smell it.

Ironically, we placed our faith in chemicals.

Our families sent us flea collars to fend off the sand-colored nits known to spread leishmaniasis. We didn’t know what that was, but it sounded bad. It was: It could cause fever, rashes, enlargement of the spleen, and, in some cases, death. So when the Army gave us permethrin to treat our laundry, we did. By hand. In the same one-foot-high by two-foot-wide buckets we used to bathe our bodies. How often?

In Army think, more is better.

There were a total 27 reported cases of leishmaniasis in service members in the Persian Gulf. Must have been the flea collars.

In the foxhole, we sat on sandbags, the cold seeping through our uniforms.

We heard the chemical alarms go off through our masks.

“Suit up,” my team chief said. At least I would be warm in my charcoal-filled suit.

We wondered if Saddam had nerve agents, if gas would slip into our lungs, causing us to drool and convulse, our tongues to swell. I had no eyeglass inserts for my mask―I usually wore contact lenses―so I couldn’t see the others in the foxhole. The rubber seal of my mask grew slick with tears, but I was silent.

One out of four.

“You OK?” a teammate asked, meaning it. I felt his rubber-encased hand on my shoulder. I nodded, not trusting my voice. I didn’t know why I bothered with the mask.

During previous alerts, our chemical detectors had picked up something, and we felt certain we had been doused. But the ubiquitous “they” said burning trash from the mess hall had tripped the alarms. We wondered what they were feeding us.

Later, after the government came up with a plethora of reasons for why they hadn’t told us sooner, we learned our military had blown up a chemical munitions plant at Khamisiyah, Iraq, and sarin gas drifted over American troops in the vicinity and beyond. 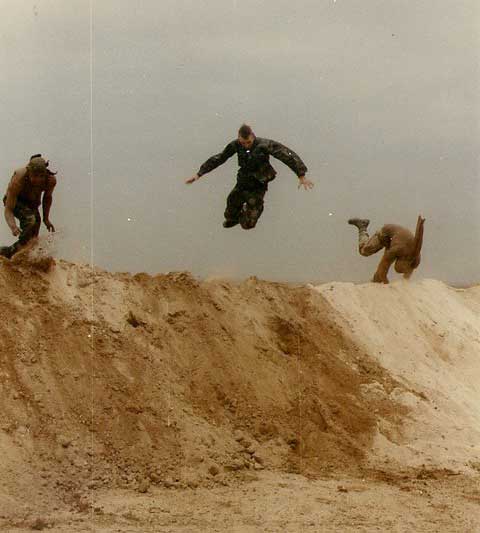 Three soldiers with the 17th Signal Battalion celebrate the end of the ground war by performing backflips off sand berms. Photo courtesy of author.

There had been attempts at preparation for a chemical attack beyond building the new foxhole. Our XO had lined us up and handed us pills, telling us how many, and how often. One, every eight hours.

He watched as we swallowed, order implied.

One friend threw up. Another ran to the sawed-off oil barrels that served as a latrine. I felt as if I had chugged 10 cups of coffee, shaky, jumpy—but I was admittedly nervous about taking unknown drugs. “They” said the drugs would protect us from nerve agents.

That can’t be good.

“That shit” was pyridostigmine bromide, and it had been used—is still used—to treat myasthenia gravis, a disease that caused extreme muscle fatigue. The FDA had issued an emergency waiver for the troops to take it, but there were stipulations: We were to receive information sheets explaining the risks and benefits of the drug. We were to be trained on side effects and how to give emergency treatment in the case of an overdose. We were to be certain we were not pregnant.

If one is good, more is better.

Later, my friends would get sick: Lupus. Irritable bowel syndrome. Muscle fatigue. Over the years, friends became so sick they couldn’t get out of bed. One-third of Desert Storm veterans would develop symptoms of Gulf War illness.

In the foxhole, I breathed in the scent of banana oil.

Betrayal, Sedatives, and the Long Road Home
A Veteran’s 30-Year Journey to Learn About a Friend Killed During the Vietnam...