On the road from Delhi to Chandigarh, the smoke in the air made me chant to myself: You’re not in Iraq, not in Iraq, not in Iraq. I drowsed on the drive, jerking awake at the driver’s regular honks. I practiced the Punjabi greetings my host family taught me with the 10-year-old servant boy, who brought me hot chai in the evenings. It was milkier than the hot tea the locals had sold when I was deployed to Iraq.

My host family didn’t burden me with expectations; I was the sole American guest at a grad school friend’s wedding. I didn’t speak Hindi, and I was a lapsed Catholic who hadn’t yet started meditating. So I watched a rotating cast of aunties flutter amid the festivities, while the bride’s mother’s cell phone rang every five minutes. I mingled with the bride and groom’s English-speaking siblings and friends, and was paired with a 15-year-old female cousin for trips to local tourist sites. At the celebration, the men were freely offered alcohol. I had to ask for it, and was coached to conceal my beer under a tissue; polite women didn’t drink. I minced around and hoped my habits didn’t offend anyone. 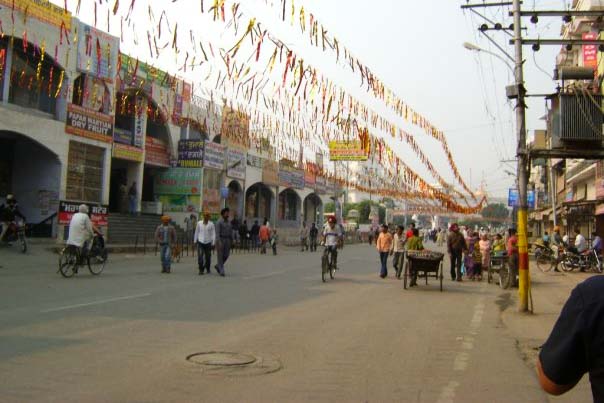 The city of Amritsar. Courtesy of Teresa Fazio

A few days in, after a home-cooked lunch, one of the aunties arrived. She brought out a small paper sack and made her way around the room, doling out pinches of oily, sugared grain. It tasted sweet, with slight grit to its texture. They called it karah prasad, or just prasad, a word that I later learned means “divine gift.” I watched the family receive thumb-sized portions; when Auntie came to me, I followed their lead. Prasad was a symbol of equality and community in what seemed, to me, a highly stratified country. Following hospitality protocols, it’s customary to take at least a little bit anytime it’s offered.

READ MORE
I See My Life in Music, So I Used It to Find My Freedom and Peace After Years of War

I received my prasad with both hands, like communion, and ducked my head in thanks, not unlike when the locals on our Iraqi base had given me samples of freshly made flatbread. I swallowed the slug of sweet lead, barely needing to chew. Auntie put the bag away, and I filed the ritual with the other customs learned that week: yellow clay smeared on the bride’s face; a mandala of sand and flowers she constructed; young people touching older women’s feet as a sign of respect. 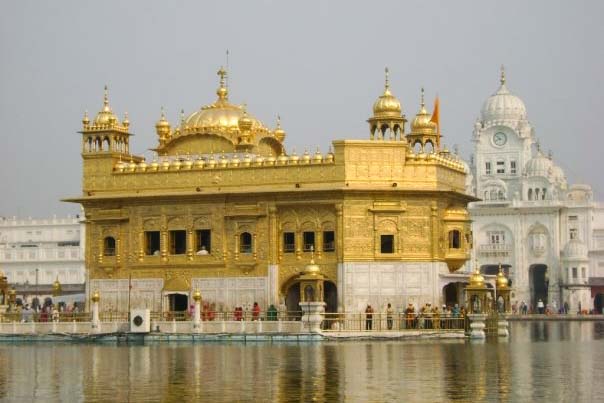 A closer look at the Harmandir Sahib, or “Abode of God,” known as the Golden Temple. Courtesy of Teresa Fazio

Towards the end of my 10-day stay in Chandigarh, the family arranged for me to see the golden temple at Amritsar—the holiest temple in Sikhism—a several-hour ride away. As we walked towards the entrance, the driver motioned toward the communal faucets. I washed my hands and feet, and rubbed water on the back of my neck. Dressed in t-shirt and cargo pants, I wrapped a white scarf around my head. I was the only white person there. People stared at me as I walked through an entry arch and down a few shallow marble steps that opened into a huge, airy plaza. But they were only curious, and their stares were not as intense as those I’d drawn running in shorts, pistol in hand, along our Iraqi base’s perimeter. 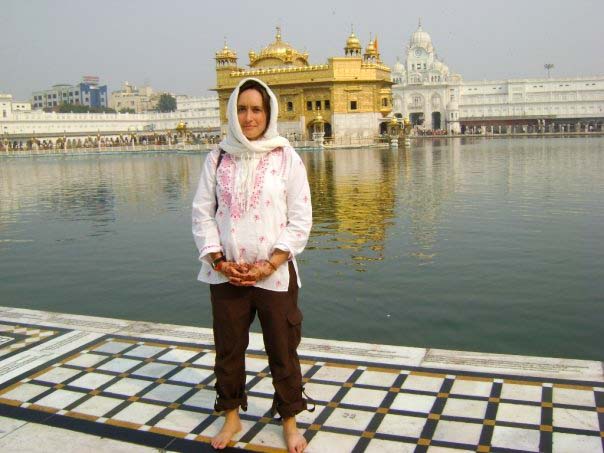 The driver and I entered the langar—a low building with an empty cafeteria line where prasad was distributed. A man pushed me a fluted paper cup through metal bars: a hefty portion of ghee and grain. It was as if prasad was meant to be eaten like the coco helado Dominican ladies sold from carts back in Harlem.

I wasn’t particularly hungry; the lump of prasad was the size of my fist. I had no bag in which to store it, nor a spoon. I took a small bite at first, then a few large ones. It was mine to squander.

The driver finished all of his. Then he balled up the sticky mess of his paper cup, rubbing his hands together as if washing them free of the holy stuff.

I kept eating as I walked, until I was more than full. I barely tasted sweetness, just the cloying mouth-feel of ghee. But I couldn’t finish the last few fingerfuls of prasad; grease had seeped through the paper cup. So I twisted it up and tossed it—thunk—into a wire trash can. On the long drive home, we waited for a herd of oxen to cross in front of us. I felt much calmer than the last time I’d seen roadside shepherds, on a convoy northwest of Nasiriyah.

That evening, my host family looked at me expectantly in their living room. I complimented the Golden Temple. “And did you take prasad?” they asked. Yes. “And did you bring some back?” No. Why? Was I supposed to?

The family largely glossed over my misstep. I had thought it was meant to be similar to Catholic communion: go to church, get a snack. I burned with the shame of not having decoded Sikh social norms. And I wondered if throwing out the last of my prasad would doom me to bad luck. 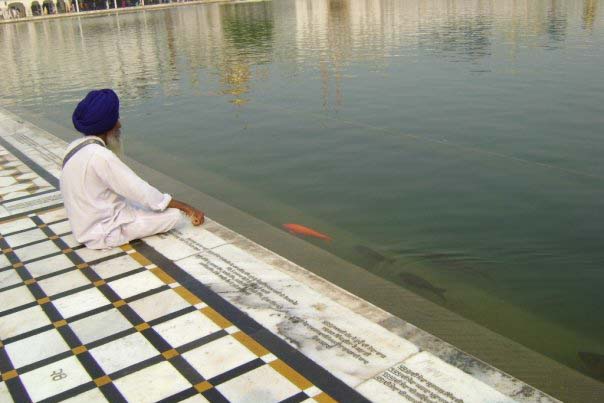 A man sits in front of the reflecting pool at the Golden Temple. Courtesy of Teresa Fazio

Though prasad is given equally, life happens to each of us unequally. Prasad recognizes the fundamentally divine kernel inside each person, and provides a reminder: No matter our lives’ circumstances, misfortunes or fortunes, all are equal in the eyes of the divine. And back to the divine we all will go. Years later, I would memorize a related phrase written on a coffee-shop chalkboard: “Be humble, for you are made of dirt; be noble, for you are made of stars.”

Five years before, a few days before I left Iraq, about 50 of us in our Marine company had our exit brief. We sat in plastic chairs in the wooden chapel, where, five months prior, a dud rocket had crashed through the roof. Our 60-something Protestant chaplain swept a paternal gaze over us. Only one part of his debrief stuck with me. He shouted that we owed the Marines who had died. We had to honor their memory with our future success.

We met him with silence. I owe no one anything, I thought at the time. I was bitter after seven months of Groundhog Day, and thought he was trying to shame us into behaving when we got home. I later found out that another officer had walked out of the chapel in disgust at the chaplain’s words. Honor in war, as in life, is not zero-sum. The chaplain may have only been trying to get us to pay others’ sacrifices forward. But at the time, his words felt manipulative and divisive. 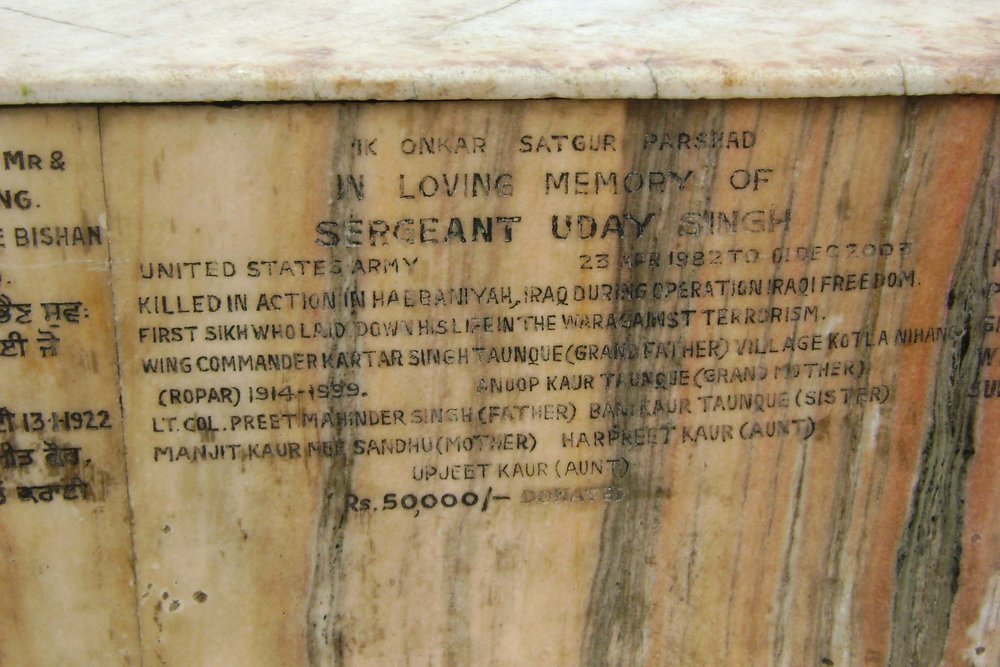 A plaque memorializing Sergeant Uday Singh, US Army, at the Golden Temple. Courtesy of Teresa Fazio

At the Golden Temple, one memorial in particular stood out to me. It was a block of pinkish marble with black writing: a name and two dates, 21 years apart. Sergeant Uday Singh, U.S. Army. The plaque named him “the first Sikh who laid down his life in the war against terrorism.” He’d been killed in action in Habbaniyah, Iraq in 2003. Four months after that, I’d arrived less than five miles from where he’d died. I flashed back to our sandy base, where everything had seemed to be the color of cement. I stared for long minutes at that memorial brick, awed, in respectful silence. Though our fates had diverged, we’d met there, at Amritsar. The questions still linger: Why him and not me? Am I wasting my divine gift? Have I failed to pay a debt I incurred by surviving?

In the Sikh tradition, prasad is a manifestation of the human desire for equal treatment. Congregants are encouraged to take it home and share it with neighbors; it is meant to overflow. One might even compare it to the Christian story of the loaves and the fishes. That day, I did find communion— just not the kind I was used to. 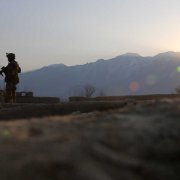 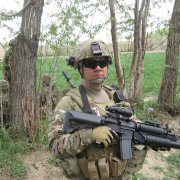 Can I Be Like the Hummingbirds, With the Strength to Fight Another Day?