By January 2005, I had lived in Baqubah, Iraq, for nearly a year. In a month, I would return home. Well, sort of home, as I would head back to a small village in southwestern Germany that hosted the headquarters for the Third Brigade Combat Team of the 1st Infantry Division—popularly known as the “Big Red One” for the red numeral emblazoned on the patch.

But just a few weeks before the Army would let us go back home, we got a front-row seat to the first democratic election in Iraq for nearly five decades. Only a few months prior, in November 2004, I had voted in the way-distant American election from my small shipping-container living quarters on Forward Operating Base Warhorse, popularly called “Mortarhorse” for the amount of incoming fire we took when we first got into country. During that American election cycle, we spent more time worrying about the Iraqi election than talking about the American one. I mean, we had been in Iraq for nearly a year, so technically we had residency. 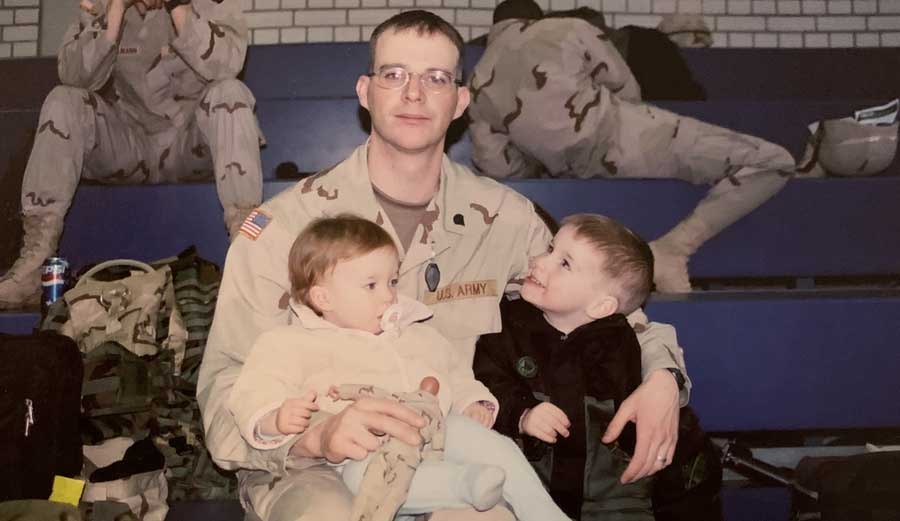 Joshua Manning cuddles his children before he deploys from Germany to Iraq in February 2004. Photo courtesy of the author.

I took the American election for granted. It was the first time I had ever voted outside of a booth inside a garish, unlit elementary school and received my ballot in the mail. I first felt uncomfortable about the idea—“Was it really secure and safe?”—but that soon gave way to appreciating the ease of being able to vote away from fellow enlisted and officers in the privacy of my living space. I could take some time to do research and make careful choices and, more importantly, vote on my own time. Our commander, then Col. Dana Pittard, one of the finest officers I ever served for, came to us after carrying the nuclear football for President Bill Clinton. To this day, though, I have no idea what his personal politics are. Nor do I care. He never pressured us in any way, nor did anyone else, and the enlisted and officers usually got quiet when election-related news came on the cable news channels in the operations center. Our focus was the success of the Iraqi election.

We had prepared for the democratic election in Iraq since long before the American general election of 2004. The amount of flying rotors and jet engines in the sky that day took my breath away. Most of the troops were in the streets of the normally restless Diyala Province on patrol or watching over gathered crowds. Tanks stood ready, Bradleys—30-ton tracked vehicles—parked near the polling sites, and soldiers watched from afar as the Iraqis handled their first election in nearly five decades. I watched the election on video screens while sitting in a somewhat comfortable chair in a tactical operations center miles outside of Baqubah and nestled alongside fields of date trees that hid the rocket and mortar launching sites. 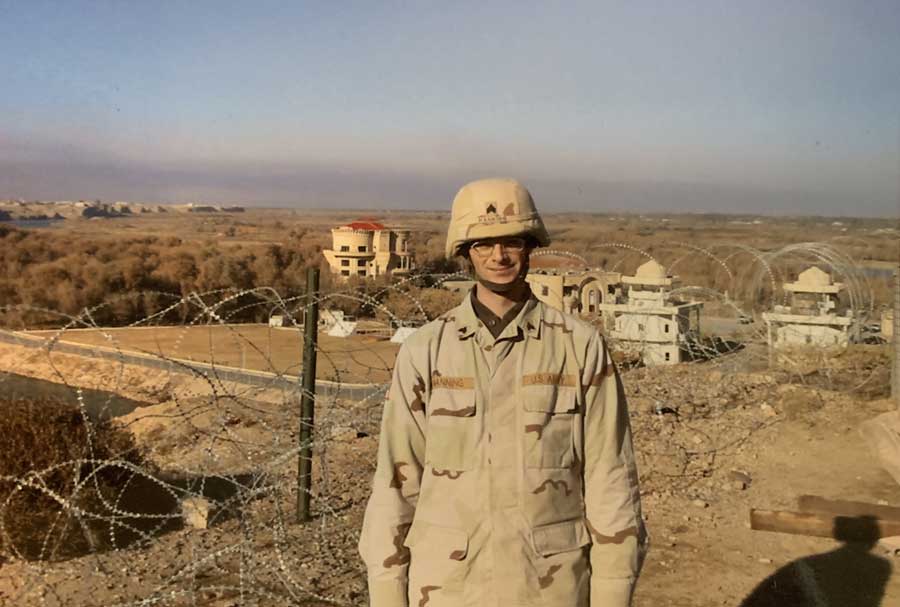 Joshua Manning stands in front of one of Saddam Hussein’s palaces in 2004 while serving with 1st Infantry Division’s headquarters. Photo courtesy of the author.

Our brigade received a Shadow unmanned aerial vehicle detachment for the deployment, and we worked their platform to the limits that Iraqi election day. We sent one Shadow—an unmanned aerial vehicle slightly larger than a model plane that sent real-time surveillance videos to the troops below—to the edges of its fuel just in time to launch another one to the limits of its fuel. But we saw only crowds of people gathered at polling sites across the cities and towns we had watched over for nearly a year. The operations staff thought it was great to see so many people out in the streets and going to vote, and the mood was ebullient. But for the intelligence staff I was part of, every crowd and every voter symbolized a potential target or mass casualty attack. Insurgents—many of whom would later become leaders or planners of al-Qaida in Iraq—had said they would conduct massive attacks that day since a democratic election in a land once traversed by their prophet represented such an existential threat.

The intelligence cell, the “S-2,” in our office sat right next to our good friends from the artillery unit whose radar caught incoming fire and whose officers made sure the returning American mortars did not land on friendly troops. In the beginning, it took us several minutes to coordinate that returning fire, which made us more of a target. By late fall, we had just one salvo in less than a minute for the underpaid lackey who dared try to test us by then. The radars spun all day during the Iraqi election, but there was not much in the air but American metal and electronics.

Either because of the moment or because of the amount of American firepower out that day, the Iraqi election went over better than we had hoped. The day passed more quietly than most we experienced that year—which marked the beginning of the insurgency and civil war that would soon follow.

After the election, warning signs appeared early. The Sunnis lost decades of clout in the government, and the Shias of Iraq, many of their politicians beholden to Iran, took over running the country. The election, we came to learn from liaisons and Iraqi counterparts, was more like old-school Chicago in its execution. Which is to say we heard about Shia sheiks who came to their voting stations and demanded ballots for their spouses and families, who often did not accompany the male leader of the family. The male Shia leaders of communities across the country got a lot of extra votes that day, and it showed.

But that iconic image of the Iraqi voter, smiling and flashing the purple index finger they used to cast their vote, gave us hope. How could it not? To this day, it represents what could be possible in the post-regime world of the Middle East. For all of the bitter feelings I have about our military adventure in Baghdad, I still find hope in the joy and freedom those Iraqis with purple fingers had that day. And it’s probably worth mentioning that those al-Qaida leaders cut off a lot of those purple fingers in the days after the election. 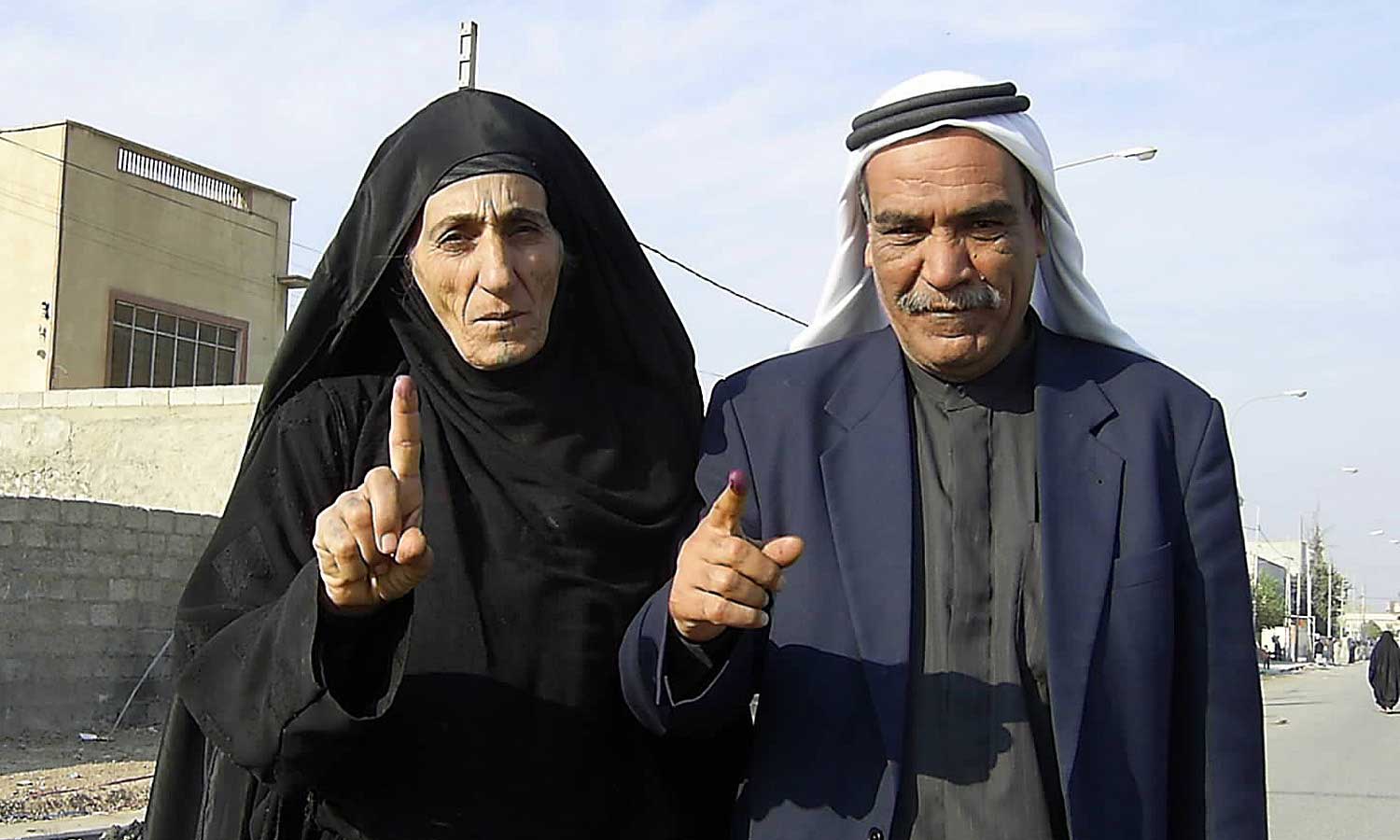 Two voters in Kirkuk in Iraq’s first election of a democratic government since the fall of Saddam Hussein in 2003 display their ink-stained fingers in 2005. Photo courtesy of the Defense Department.

But the people who voted knew the danger. They knew the threats, they knew they would have to vote in public, and they knew retribution would likely come after election day. Despite all of that, the idea of democracy and a representational government motivated them to get out. As cynical as anyone is about that election or American elections, that inherent resolve and motivation to have a say is a thing of beauty. I still think of it fondly. These people faced imminent death to get past the memory of the regime and write their own rules.

I took home a roll of Iraqi ballots someone from the civilian affairs unit got for the operations center for that very reason. Still, I could never decipher it. So many parties and faces, as well as Arabic lettering, that it was confusing just to look at. We had attached a picture of the flat-topped and bespectacled chief warrant officer we all adored to another ballet for the local city election. It hung over the artillery unit’s desk. The chief only got a few votes during our internal election. We said next time he should befriend a Shia sheikh.

I now live in Washington state, where most everyone votes by mail. Having one primary election under my belt here, this is now my preferred method of voting. But it is not just about the convenience anymore: States that allow vote-by-mail seem to have the most democratic elections, which is to say that both “red” and “blue” get a freer chance to vote because they can do it on their own time. A sheikh cannot stuff an envelope with reams of ballots. 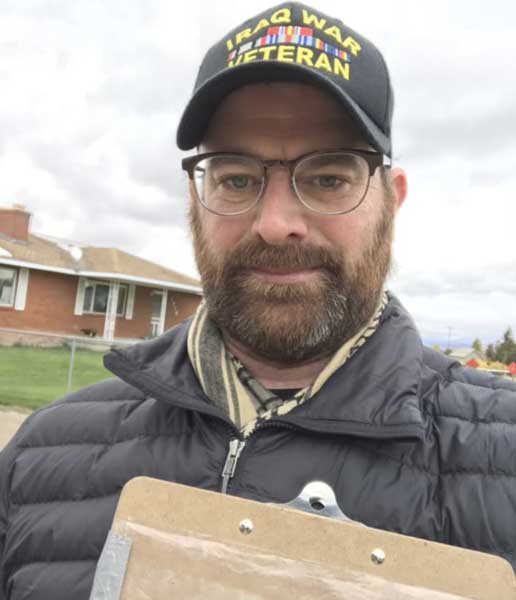 Joshua Manning goes door to door to get out the vote in Helena, MT, in 2018. Photo courtesy of the author.

When I was deployed, both in the Middle East and in Europe, I did not lose my right to vote free and fair in an American election. My state and my nation trusted me to fill out a ballot from thousands of miles away so that my voice was heard. My vote as a soldier in Iraq carried the same weight as my vote now as a middling state bureaucrat in the Evergreen State. What matters most is that my vote counts—whether I shuffle into a garish, unlit elementary school and emerge with a little sticker on election day, or I take a weekend to do research while I study the positions of district judges then mark an oval on a ballot and affix a stamp to the envelope.

While I do not harbor any illusions that I fought for any American’s right to vote when I was in Iraq, though I probably did help the Iraqis get ready to settle a lot of old scores, I did learn that voting was not a binary option. Democracy is messy, and painfully slow, but it gets its power from people willing to show off their purple index fingers or stickers on their lapels. People who are willing to speak truth to power in order to form more perfect unions.

Remembering Journalist Sam Castan and His Deadly Ride with Crazy Horse
“I Hope She’s Scarred for Life” — Recalling My Time as a Blackwater...