I arrived at Fort Meade the day after the Twelve became 11. Number Twelve had drunk bleach and hanged himself with an extension cord. So my first day of MOS school, where I was training to become a combat correspondent—like Full Metal Jacket—was spent in a chapel.

The Twelve, as they were called by the platoon, had gotten into serious trouble for committing crimes involving drugs called Triple C’s. It seemed likely that the Marine Corps would discharge all of them—except, of course, the Marine we were going to see, who would now, ironically in death, forever be claimed by the beloved Corps—but that was all the information I could glean about the situation before entering the funeral service. 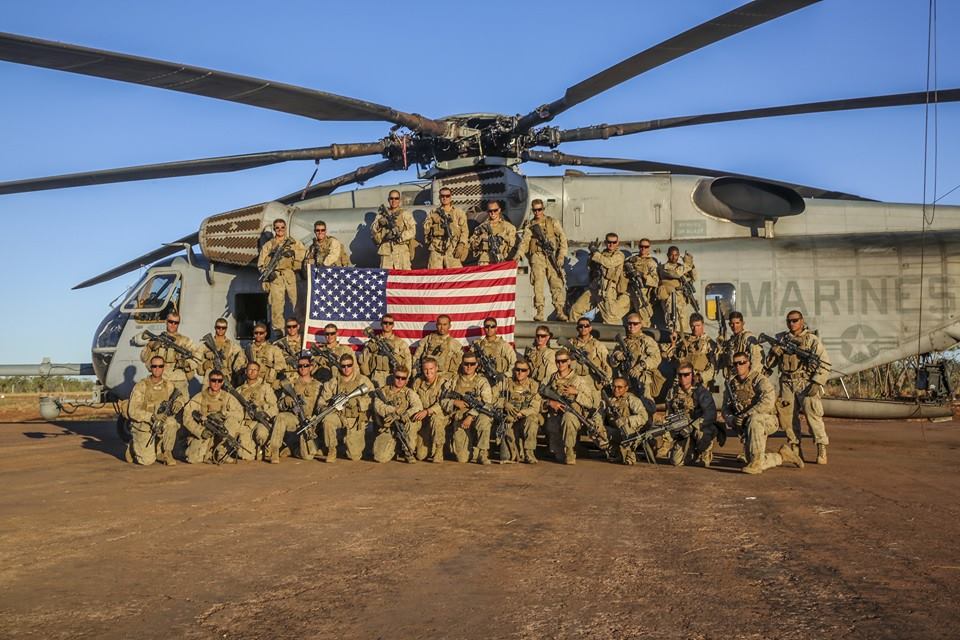 I stood at attention in a pew next to two female Marines who had relinquished their bearing to emotion, allowing themselves not only feeling but also expression, which fascinated me. For that hour, they were not privates first class but rather Janelle and Casey, two normal grieving people in a uniform that, for them, didn’t suit the occasion, only detracted from it, even exacerbated it.

Staring into the eyes of the private’s portrait—which stood as erect and cold on the easel as he stood in the photograph itself next to his coffin—I couldn’t cry. I didn’t know him. I noticed, perhaps for the first time in four months, that I didn’t feel anything.

Taps began. The photo taken only a few months prior was nothing if not ironic. The dress blues that he wore, the same that every Marine wears for that exact photo in boot camp, were not his at all, nor were they real: They were actually more like aprons, cut in half in the back and tied around him. Appearance was more important than truth in that other world. Only a day ago, he was a criminal; today, lying frozen at attention in his eternal wooden rack, all that mattered was his title, Marine.

That night I cried on the six-inch mattress of my wooden rack, which was always immaculate, for the sheets and the blankets were bootbanded underneath such that no matter how hard one slept, the bed would always remain ready for inspection.

I’d been given the top bunk by the same lance corporal who taught me the bootband trick, and I let the tears fall as they wished. I didn’t cry for that private first class, though; I cried for me, for both relief and horror. On the one hand, my bunk and I sat above it all, not only the situation—the Twelve and their fallen member—but also the eyes of every Marine at the MARDET, none of whom I felt I could yet trust. On the other hand, I lay just a few feet below the same ceiling from which, only a few doors down, that private first class I never knew had decidedly taken his own life.

The next morning Gunny addressed the platoon, standing at ease in formation, and told us that we were now on restriction: no off-base liberty, no recreation room, and no gym. Private First Class Pyle, a tall, lanky kid from Utah, leaned over and said, poignantly, with a psychotic grin, “One puppy pees on the floor, and they punish the litter.” A shiver ran down my spine, but right then I knew I could trust him.

Over the next five months, after our journalism classes, Pyle and I would sit on the smoke deck with the remaining members of the Twelve, where they could always be found. Usually one played a guitar, a few would dip, and a few others might smoke, but everyone would collectively attempt to identify the essential quality that made the MARDET, the building and all that came with it, insufferable. 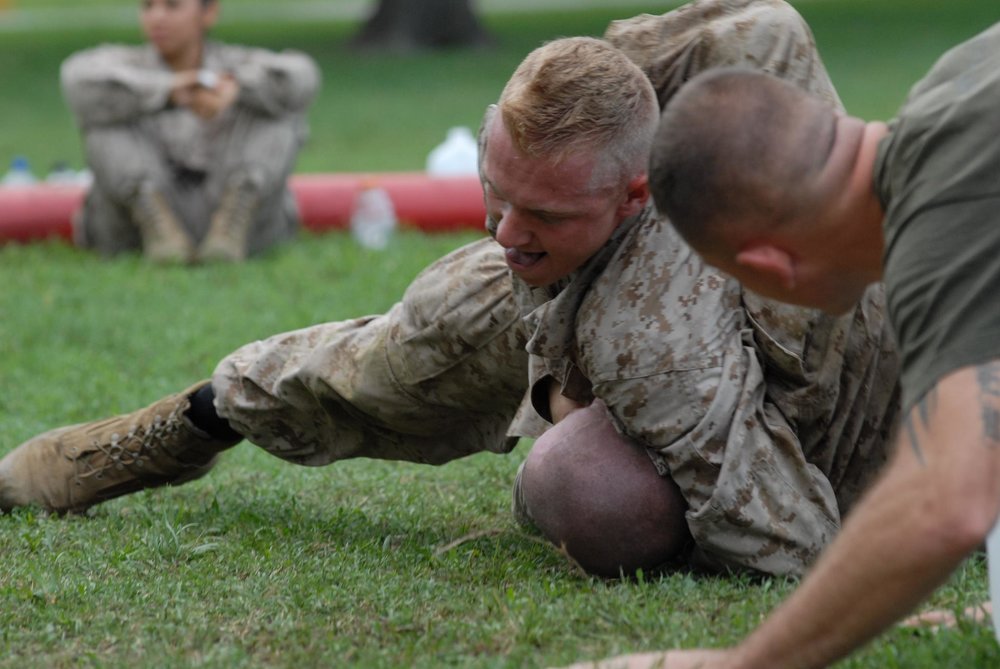 One day, after Pyle and I had achieved off-base liberty status, granted with seniority and good behavior, he asked me if I wanted to try Triple C’s and Delsym—the same drugs that had been the Twelve’s undoing. I said, “Yes,” unhesitatingly, without expression.

Pyle called Taxi Mike. He’d take the Marines to Baltimore strip clubs, buy them alcohol, allow them to buy drugs. He was our in, our key to the door of illicit opportunity.

Pyle told me to buy the Delsym; he’d buy the Triple C’s. In the back of the cab he dumped a handful of small red pills into my hand. I stuffed them all into my mouth and let the orange, viscous cough syrup carry them to my stomach. I set the empty bottle on my knee, wiped my mouth, and licked my lips, tasting the remnants of the sugar-coated pills and the orange-flavored Delsym. We went to the mall and waited.

After a few hours, I still felt nothing. Pyle, who sat next to me in one of the mall’s black massage chairs, giggled with his eyes closed. “Do you feel it? You should see it, man.” I felt nothing but agitation. I wanted to see what he saw, whatever came with the high we were chasing.

An hour later, I stood in front of the Marine on duty and signed the both of us in, talking calmly and lucidly, while Pyle snuck upstairs to our room. But as I attempted to place my foot down on the first step, I missed—reality unhinged. I stood half suspended from the railing, staring at blue-stained carpet only a foot from my face.

“You all right, lance corporal?” I heard from the duty. “Fine! I’m fine,” I said and rushed upstairs.  I sprinted down the hallway and bounced off of the walls trying to keep my balance. Reaching our room, I slammed the door and stared at Pyle with a wide-eyed grin. “Pyle, oh my God, I’m dying.” 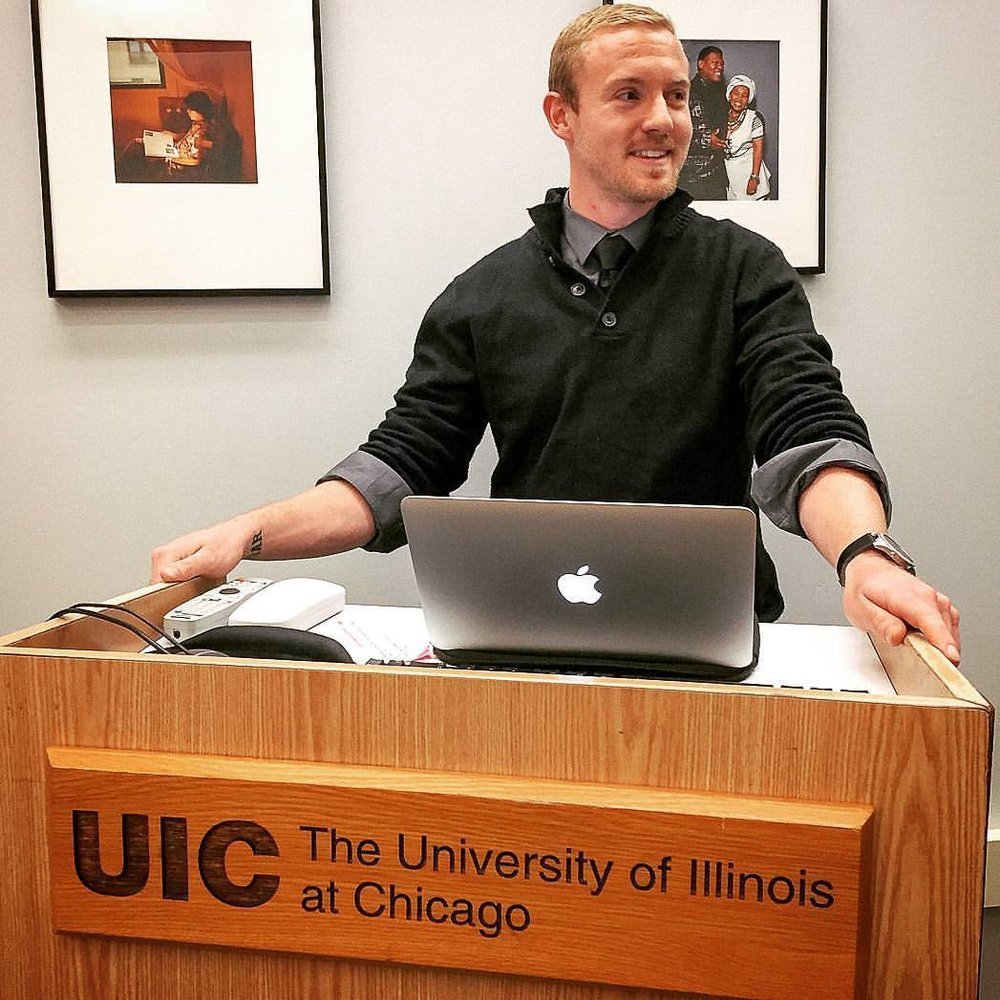 Sgt. Scott Reel, former United States Marine Corps combat correspondent, presenting his thesis prior to graduating with a degree in English and philosophy at the University of Illinois Chicago in 2017. Courtesy of Scott Reel

For the remainder of the night, locked in the fetal position, I danced in my mind, round and round with violent, vibrating colors and deep melodic sounds that filled me with exultation and terror. Would they catch me and discharge me? Would I be Number Thirteen? Would I wake up dead?

At this point, after four or five months at the MARDET, I had succumbed to both my depression and anxiety. I took Pyle’s prescribed “medicine” as well as those prescribed by the base’s medical—Ambien, antidepressants, something for nightmares—but none of it helped. Only after being imprisoned in complete darkness, only after being absolutely alone in my unbounded mind, swirling in a midst of confusion, did it become clear.

There was no way out, no escape from here or the Marine Corps. I looked down at my nametape, Reel. This is what I had signed up to do, so I’d better do it. Shortly thereafter, I became squad leader, acquired my green belt, and finished my second MOS.

Pyle changed MOSs and, I heard, was institutionalized. Finally, after being released back to his MOS school, but not before piloting an uprising, Pyle was separated from the Marine Corps. I’m sure his father, a sergeant major, didn’t understand.

As for me, when my master gunny first looked at his lance corporal—over a year into my enlistment, with a green belt, a first-class PFT, and a second MOS—I’m sure he didn’t understand either, the difference between Lance Corporal Reel and Scott Reel. Appearance mattered more than truth.

Answering the Call for Veterans and Military Families ‘Suffering in Silence’