It’s another Friday morning in Quarantine. I’m staring at my computer screen and sipping coffee, trying to put the finishing touches on some reports before another conference call. My wife walks through the door after finishing an overnight shift at the hospital. She takes a breath and starts the routine that has now become normal: She drops her bag, takes off her mask, takes off her shoes, and starts to use disinfectant wipes to clean everything. She works slowly and methodically, the only way to do it right.

When she takes off her shirt, I see the baby bump, and I swear it has grown overnight. I wonder how much more her belly can grow—she still has three more months until our daughter is due.

I know not to ask her how the long shift went until she finishes the doorway routine. I know that she has been working directly with Covid patients. My time in the Army taught me that the best thing you can do for someone who is tired from working all night is to make them a warm meal. As she takes a shower, I take a break from work and heat up the pan to make eggs and sausage. I usually aim for pancakes, but the store was out of mix on my last weekly run and I can’t justify shopping at multiple stores. Like many families, we have enjoyed eating more meals together in quarantine. As I put the food on the table, my wife sits down, and I feel like I can finally ask her about her shift. 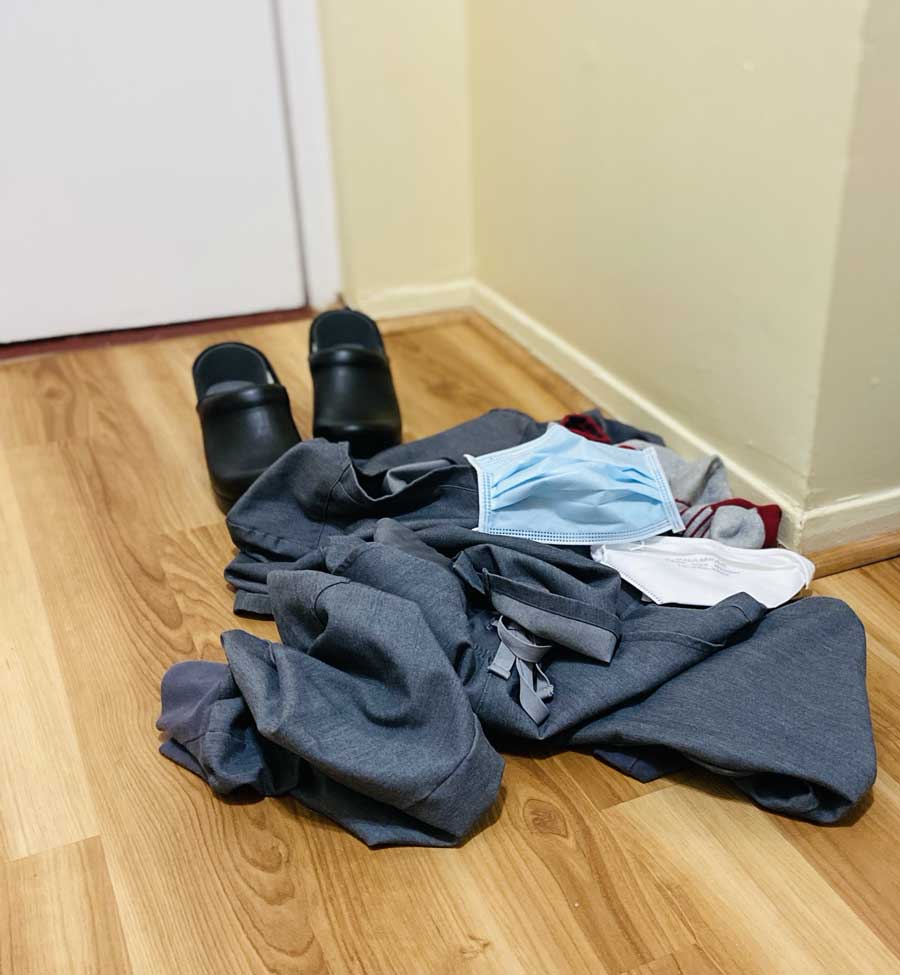 A pile of scrubs and masks at the author’s door. Photo courtesy of author.

“People must be out getting back to normal life again—things were pretty busy,” she says. She tells me that she examined a few patients who were either Covid-positive or suspected of having Covid. Where we live in Connecticut, the rate of infection seemed to be stable for a long while; the curve seemed to have flattened, but cases are quickly rising again. I remembered going to the pharmacy yesterday and seeing a few families eating “outdoors” at an Italian restaurant next door: no masks, no spacing, enjoying life. I remembered going to a trail that runs along a river last weekend to get outside. Only a few of us on the trail wore masks, only a few of us were solitary. I walked for a few minutes, turned around, and got back in my car. Yeah, I thought, I guess people are getting back to normal life.

We have talked about how best to protect our daughter so many times that there is nothing more to say. My wife has been coping through meditation. When she tells me she has logged more than 700 minutes on the Headspace app in the last few months, I realize how hard she is fighting to keep it all together.

While she eats, she stares blankly; little tears turn into bigger tears and she starts to cry. When I ask her what happened, she tells me about how some of the patients and their family members treat her. She doesn’t know why it shocks people when they’re asked if they want to be intubated in the case that they stop breathing. She doesn’t know why they don’t understand that going out to restaurants and bars or having large family get-togethers can have deadly consequences. She doesn’t know why some families lecture her about how things are “still open.”  She doesn’t know why people roll their eyes at her when she walks into their exam rooms in full PPE and ask her if that “is a little excessive.” I think about our baby, and it makes me wonder if our little family may end up having to pay the price for people “getting back to normal.” 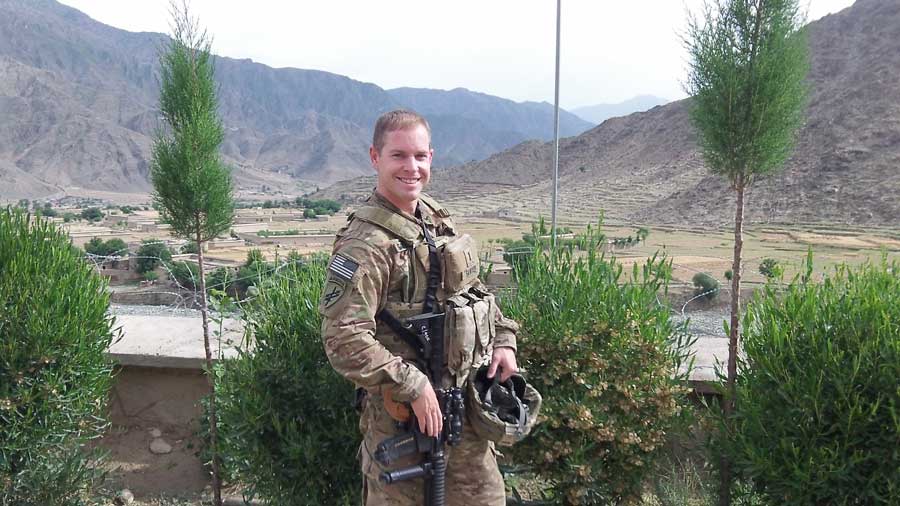 The author in Afghanistan in 2012. Photo courtesy of author.

“There is so much more, and I haven’t been telling you because it’s awful,” she says. “It’s like people think we, the health care providers, are the problem.” She is right: What can she say to me? I wouldn’t get it. She reminds me of myself when I got back from Afghanistan.

I was a civil affairs officer in Kunar, Afghanistan, in 2012. My team embedded with infantry units, and we did our best to make sure those units weren’t getting shot at, or at least that they were shot at less. We worked with local Afghan officials to help develop and stabilize their communities. We funded development projects, paid for collateral damage, and sadly, even negotiated the “condolence payments” with families that had lost loved ones as a result of the ongoing conflict.

The U.S. government had spent heavily in Kunar, and when I got there, I was bombarded with ideas for new projects every time I sat down to meet with officials. There was one particular school principal who was more persistent than the others. Every time he saw our vehicles convoy into the subgovernor’s compound, which doubled as a police station, he would find me and launch into another impassioned plea to build a new school. The first time I met with him, I took down all of the information, went back to Forward Operating Base Joyce, and asked our embedded USAID representative about the viability of building a new school. She met me with a mixture of anger and laughter. She had been there for almost three years and had already built a school in that city, and when that school wasn’t good enough, USAID built a wall around the school to protect the kids. She told me that the school was not being used and was only about 200 meters from the police station. 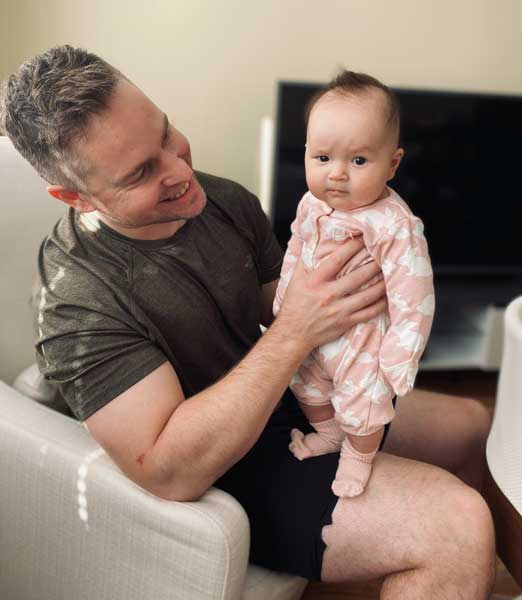 The author with his daughter. Photo courtesy of author.

The next time I went back to that city, I met with the principal. He asked again for a new school, but this time I asked him why the school that was built for them wasn’t being used. He told me it wasn’t safe from the Taliban. I looked down the hill and pointed to a large abandoned building 200 meters away. “Is that the school?” I asked.

“Yes,” he said, “but it isn’t safe from Taliban raids. Our kids aren’t safe. We need another school farther away.”

“No,” I said. “We have already done enough. The school is close enough to this police station that there should be no reason to be caught off guard by the Taliban.”

On the convoy back, I thought of how absurd the situation was. How is it that we could spend so much effort and money to help a city that didn’t seem to want to help itself? I thought of the young American soldiers who had died in the Kunar Valley. I thought of the times I personally had been shot at trying to defend his city, his children. At what point do we have to stop helping those who refuse to help themselves? I thought.

The principal had nothing to lose asking for another school. We would spend and everyone would get a cut. A few weeks later, some soldiers asked me if we had money to buy tarps—they told me that they had met a school principal and that he assured them he needed a new school, but he said that if we can’t pay for a school, we should give him money for some tarps so his students wouldn’t have to sit in the sun. Without context, this was a great idea.

As my wife stares blankly, slowly eating her breakfast, I realize that she feels like I felt in Afghanistan. She wonders, At what point can we stop helping others who refuse to help themselves?

Becoming a Lobster and Surviving the Monotony of a Coast Guard Deployment to...
Scroll to top