​​I sat with a retired Marine Corps major, Scott Huesing, who led Marines in combat in Ramadi and wrote the book Echo in Ramadi about it. The first chapter is about the loss of one of his Marines, and it ripped out my guts when I read it. For guys like us, war is personal, visceral, and dirty. We executed what the war career bureaucrats and military leadership sent us to do.

After swapping war stories, something tugged at me. I had to ask.

“Did you ever know what ‘success’ in Iraq was?” I asked. “Not from the ground but from a strategic perspective. Did anyone ever tell you, ‘Success is …’” I raised my palms and shoulders like I was hoping he would lay the answer in my hands.

“We knew what we wanted to accomplish in Ramadi,” he said.

“Yes, but that was the execution,” I countered. “What was the mission? In World War II, it was to beat the Nazis and Germany. What was it in Iraq? I heard a lot of hyperbole like, ‘build the government,’ but I never heard how. Hell, I was there as an enlisted man, as a contractor, and as an officer. 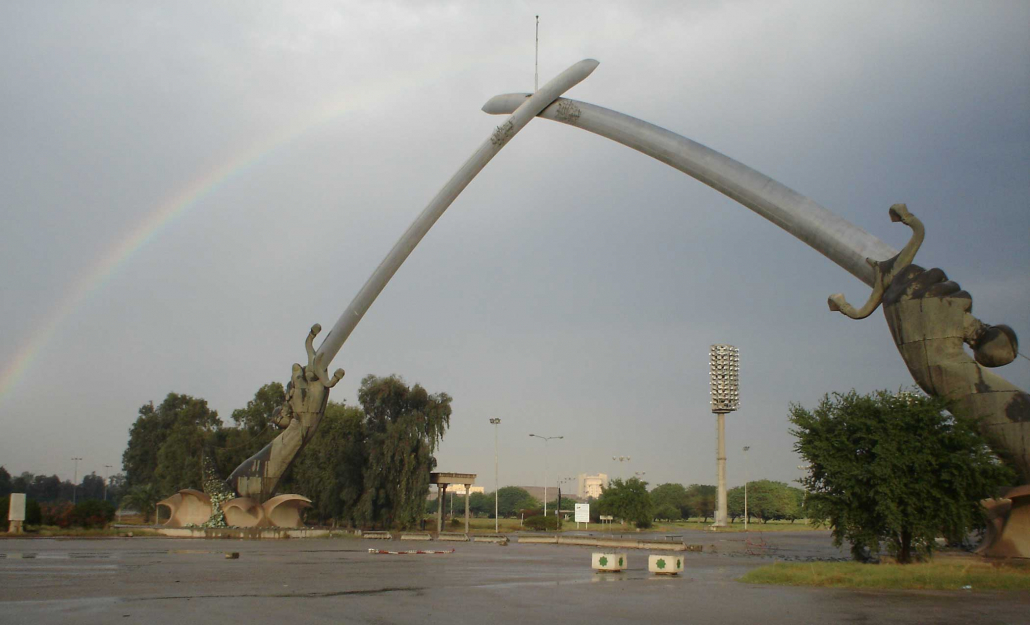 A rainbow hovers over the Victory Arch in Baghdad, which was created for Saddam Hussein after the Iran-Iraq War. Photo courtesy of the author.

“Aside from knowing we had cleared Ramadi,” he said, “I don’t think I ever heard what success in Iraq consisted of.”

As two former military officers who have written books about their time in Iraq, neither of us could articulate what a successful completion of the mission would look like. Was there one? How would we know when it was over? It weighed on us for a few seconds until we snapped out of it and started eating our California rolls.

Since leaving the military, I’ve searched my soul for answers. Was it worth the lives of Luke, Steve, and Faith? Did I spend three years of my life fighting a lost cause? Like all wars, the people who plan them and the ones who execute them are in different castes. I get to wrestle with PTSD and the loss of friends while the people who started the chaos cheer from the sidelines and critique. I think I know how Vietnam veterans feel.

Career politicians and general officers “fought” in Iraq from the comfort of a palace or a nice condo in Washington. I see them opining on cable news. When battles are won, they take the credit, and when they don’t, they deflect blame. As I wrestle with growing up in a combat zone, they armchair-quarterback from the comfort of their couch—angry their fantasy combat team is not winning them the game.

READ MORE
The Son of Refugees Reflects on How to Lose a U.S-led War

As I watch the Taliban retake territories we fought over for two decades, I’m livid. Thirteen  service members lost at Kabul’s airport. The Taliban makes promises—“We’ll secure the country”—but Oct. 8, it’s early days all over again: A suicide bomber executed himself in a Shiite mosque, killing as many as 80, and there’s the Islamic State to claim it. Sunni-on-Shiite violence. We could have left 10 years ago, saved a lot of lives and money, and gotten the same results. Paradoxically, we could stay 10 more years, losing more lives and cash, to get the same result. In summation: The mission is and was a political talking point agnostic to the sacrifices of the men and women who executed it.

I shouldn’t be shocked, because the same happened in Iraq, but it opens old wounds that I’ve worked to heal: anger, frustration, and loss. I’ve tried to find peace in the violence of my past. That peace turns to rage when I see a former flag officer or career diplomat paraded on television to give their assessment of why it’s happening while promoting their new book on leadership. It’s disgraceful. 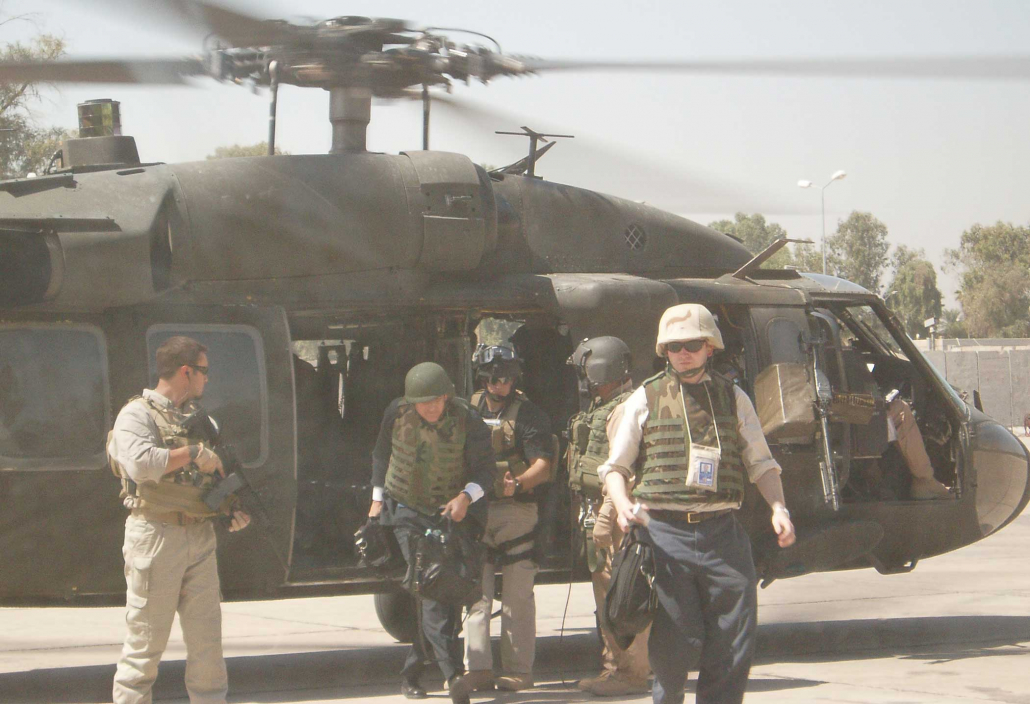 A congressman Lerette’s unit protected gets off a Blackhawk prior to his tour of the Green Zone. Photo courtesy of the author.

I try to give them the benefit of the doubt. They didn’t experience the war like I did. In 2004, I worked for Blackwater ferrying diplomats to random locations to “build the government” of Iraq. In 2004, I was driving a delegation of congressmen and their general officer sycophants around the Green Zone. We drove them to highly secured government buildings and then took them on a tour of the infamous Crossed Swords monument. Unknown to them, we’d cleared every location with a bomb dog, set security around the perimeters with snipers, and restricted all access to the area. The congressmen and generals marveled at the monument and took pictures like it was a sightseeing tour. They left before sunset because the rockets and mortar arrived shortly after the evening call to prayer each night. We wouldn’t want them thinking this was an active war zone.

With this security, how could they know a real war was happening? Within days of them leaving, they talked on television about the great progress of the war. At the same time, 2003’s Coalition Provisional Authority Order Five was allowing the new Iraq government to facilitate de-Ba’athification using Shiite kill squads to slaughter Sunnis in Baghdad. Sadr City erupted with anti-occupation fighting targeting U.S. service members. That didn’t stop Paul Bremer from making his rounds on the news networks declaring the fallacy of hope for Iraq while my buddies Luke and Steve were shot down over Baghdad in April 2005.

I left Blackwater and joined the Army ROTC, where the five-paragraph operation order was drilled into us daily. Situation, mission, execution, sustainment, command, and control. As I commissioned as a fresh butter bar, I learned the Army revolved around the operations order. I quickly learned the Army was mission-centric and execution-lacking. I knew the mission in Iraq was to “stabilize the government,” but how were we supposed to execute it?

I was at a small joint security station in northern Baghdad across from Sadr City. Executing our mission consisted of collecting intel no one would use as we surreptitiously exited Iraq. We lived a quaint life in a no-salute zone supporting an infantry company. I woke to an email from my commanding officer stating we needed to do mandatory training on bicycle safety. Someone on a large base was hit by a vehicle while riding a bike. It was the fault of the bicyclist because they were not wearing a reflective belt. The commander of Iraq, wanting to ensure this snafu wouldn’t hinder his career progression, mandated every soldier in theater take online bicycle training. I called my commanding officer.

“Sir, our internet connection sucks and we don’t have bikes. Do we really need to complete this training?”

“I know,” he said. “I know. You’re my third call today. I get it, but this came down from I Corps and to the brigade.”

We both sounded dejected because he knew I would have to relay the same stupid order he gave me to my soldiers.

“This is what generals worry about?”

As my soldiers and I clicked through the training, constantly refreshing the screen due to the terrible internet connection, I wondered how this fit into executing the “mission.” I didn’t have to ponder long because one of the soldiers in my battalion was killed by a rocket on a base south of Baghdad. One of my soldiers was close to the deceased, and I had to break the news to her. No training could’ve prepared me for this. 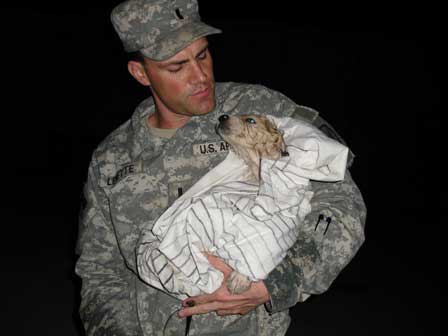 Morgan Lerette holds a puppy after giving it its first bath in Iraq. Photo courtesy of the author.

Prior to our nightly meeting, I asked to speak with her. We sat on a wooden step. I took my hat off and held it as I looked at her and told her about the death of her friend, her sister-in-arms. She began to cry. I put my arm over her shoulder and tried to console her. She leaned into me and I felt the tears push through my ACUs as I told her we were making arrangements for her to attend the funeral at Camp Liberty in 48 hours.

I would have cried myself if I didn’t have to inform the rest of my team. I let her know we were on a communications blackout so she couldn’t call or post about it until we had confirmation the family was alerted. I asked her to skip the meeting and told her I’d check on her soon. She stood and walked toward her room as tears streamed down her cheeks.

I entered the office and told the team. Anyone who wanted to attend the memorial was welcome, but no one was to use the phone or internet until we received word the family had been contacted. This was nonnegotiable because the family should never know about a death via Facebook. Some cried and others stared in stunned silence. For the first time, the burden of war became personal. 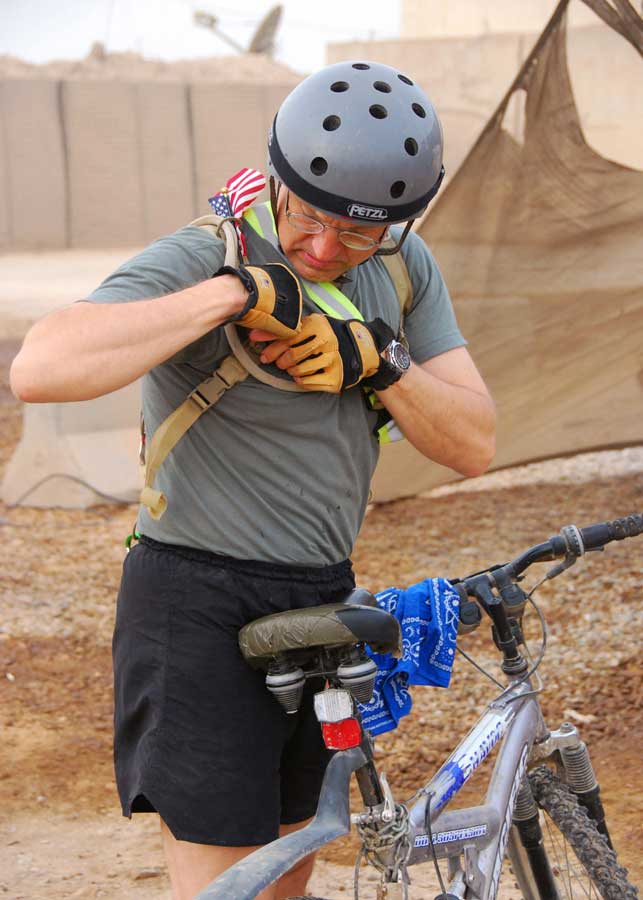 First Lt. Richard Molinski makes minor adjustments to his hydration pack before continuing his ride in the Honolulu Century Ride in Iraq at Camp Taji, northwest of Baghdad, in 2008. Photo by Master Sgt. Christina Bhatti, courtesy of the U.S. Army.

Before they went to Camp Liberty for the memorial, I briefed them on the rules: They were entering a salute area, had to wear reflective belts at all times, had to be clean prior to entering the chow hall, and the military police would pull them over if officers caught them speeding. This was the dissonance of war—an obsession to mandate inane rules for officer evaluation reports to justify handing out Bronze Star Medals to officers even as others were mourning the loss of a friend.

By now Gen. Petraeus was on the news talking about how to win an insurgency, which led to the surge in Afghanistan. Robert Gates was starting to write a book applauding himself for his work as secretary of defense. Six months after it published, Mosul, Iraq was taken over by ISIS.

History is repeating itself in Afghanistan, and Gen. Petraeus is again making the rounds on cable news explaining it’s a mistake to leave Afghanistan even if the war has no definitive mission or execution. For a former general, the only answer is “more war.” Combat’s not personal to career bureaucrats and generals; it’s the circle of life. Hakuna Matata.

Maybe I’m bitter? Bitter I lost friends to wars we didn’t win—couldn’t win. I’m bitter watching Afghanistan crumble because it reminds me of Iraq. I try not to think about it because there’s only so much soul-searching a person can do with a ground perspective of the wars. Maybe, just maybe, a flag officer or career diplomat will read this and do a bit of soul searching. How they failed at defining success. How they failed at winning wars. How they failed their junior enlisted and officers tasked with executing their trivial policies. I doubt it. They seem busy making their rounds on cable news. 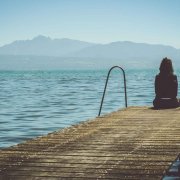 He Used a Position of Power, In a Time of War, to Get What He Wanted.
“People Are Relying on Us”—National Guard Evolves to Fight Wars, Secure...