It’s hot. Stupid hot. I’m waiting for this formation to be over so I can work out. What the fuck is this sob story anyway? I have to listen to some Staff Sergeant tell me about how it took two DUI’s for him to get his life together? How did he make Staff anyway, with two DUI’s on his record? I’m always hearing about the old days, the wild days, the Iraq days, days when this guy could get promoted to E-6, and be guaranteed 20 years and retirement. Good luck re-enlisting now as a first termer, with a DUI under your belt.

I’ve spent my time in the Marine Corps seemingly always one step behind the “real thing”—I missed Iraq, missed the big push into Afghanistan while I piddled away in FAST Company, missed the big re-enlistment bonuses, missed it all, it seemed. And now here I am, September 11, 2011, ten years after the big day, the day that split my childhood neatly into before and after, at Enhanced Movaje Viper in luxurious Twentynine Palms, Calif., getting ready to deploy to Afghanistan to fight in a war that began when I was 12 years old. A decade later, the war was still being fought, although in the interim it had twisted itself into something hardly recognizable as a war anymore. Why and how exactly we were fighting was unclear, while the when and where were now tightly regimented and regulated.

What happened to the kill days? Had I missed them in the years it had taken for me to grow up enough to join the fight? Days earlier during EMV, a long-haired sergeant had come up to me, as we waited our turn to run the range he just finished. Tan from the desert, with a crazy reckless juvenile boyish smile, he laughed and told me: “Just shoot and move, brother. Just shoot and move.” It was like a glimpse back in time, as my adrenaline pumped to sling lead, shoot rockets, pour sweat into the pads in my Kevlar helmet, run until my lungs wheezed out the whiskey nights and morning cigarettes. 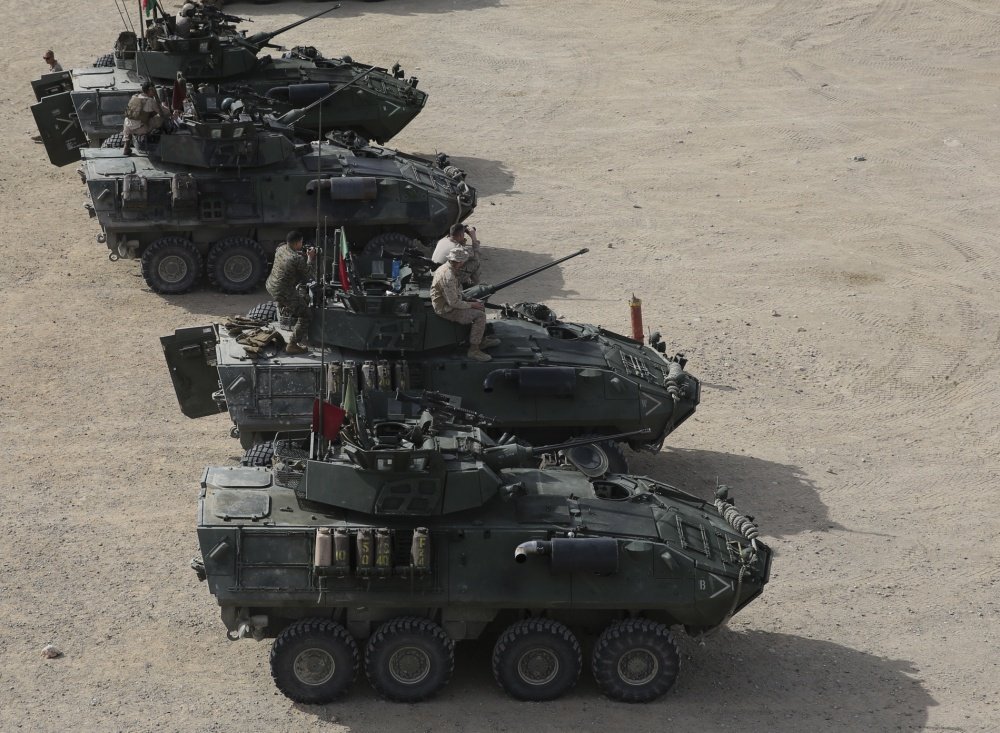 But those moments were few now, and my sergeants and staff sergeants, giants of the glory days, the Iraq days, the free days, seemed tired. The crazy women they had dated and bedded had become wives, and wives had become ex-wives. The other young men my sergeants had joined with, with whom they had partied, and drank, and shot and moved, were out now, living their civilian lives. Others would remain forever young, their names carved into memorials with dates and the names of far off places next to them, enshrined in local newspapers with those silly boot camp photos under the headline “Area Marine Killed in Action.” My sergeants seemed tired now. They all had stories like the one Staff Sergeant was telling now about how boyish warriors became tired old men.

How I came to be listening to this guy drone on was simple, really: It was the tenth anniversary of the 9/11 attacks. We were on our mock Forward Operating Base (FOB), designed to mimic what it’d be like to live in another country. Although in Afghanistan, a FOB meant chow halls and showers and toilets that flushed, and this “FOB” had none of that, just HESCO barriers, Alaska hooches, and a long line of those ubiquitous blue porta-shitters.

The purpose of the formation that morning was not to celebrate, but remember, maybe; or at least to reflect upon, the tenth anniversary of the 9/11 attacks. The moment wasn’t lost on me, the big perfect symmetry of it all. Our CO gave some perfunctory remarks to open the memorial. The captain was an excellent commander on whom the gravity of the anniversary I’m sure, was not lost, but who seemed much more interested in keeping our minds on training and readiness. After his remarks, he opened the floor for anyone to share their thoughts. To Marines this sort of openness felt forced and awkward. 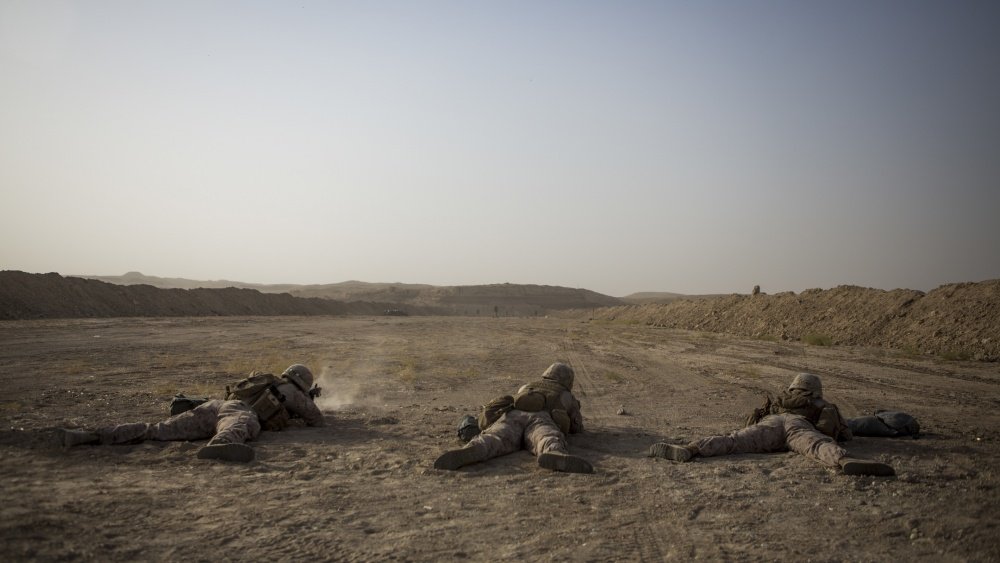 I glanced at a sergeant whom I hoped might speak. I knew his 9/11 story, because every anniversary I like to ask whomever I run into how they remember that day. He had been a junior Marine in Washington, D.C. and had seen the smoke rising from the Pentagon from his barracks. He didn’t move though, and seemed as ready to be done with this whole exercise in grief, as did our CO.

For a moment, it seemed the unity of the formation would hold, like those moments at Battalion formations when the BC asks if there are any questions, and hundreds of Marines will each other desperately to not raise their hands. But as all too often happens with perfectly good silence, someone rushed to fill the space. So here I am, listening to the life story of this washed up SNCO who has nothing to say about 9/11, save a few choice remarks about terrorists, insurgents, or foreign peoples in general, and what he saw as their general lack of good manners, fighting spirit, and love for democracy.

Staff Sergeant finished his diatribe sans big finish, or even a coherent thesis. He just runs out of steam, his own rage long since exhausted. It was a tired story told to a tired audience. Tired from the heat, from the weeks of sleeping on the ground, and from a decade of war that still had no clear end in sight. I was ready to get that workout in now, and sweat out the fatigue.

I thought about my sergeant, who hadn’t spoken, and wondered how many deployments he had been on since 9/11. I thought about another of my sergeants, who told us his only job was to bring us home safe; who seemed tired of trying to accomplish the “mission”—or even trying to understand it. I thought of all my NCO’s and how tired they must be. Tired from carrying the weight of the combat mission; the weight of ever more radios, batteries, body armor, testing kits, anti-IED devices, water, and ammunition; and the weight of names. Too many names. Tattooed on biceps, forearms, chests, and backs. Names scratched into simple black bracelets, that, at the time, technically weren’t allowed to be worn in uniform. Everyone wore them anyway. 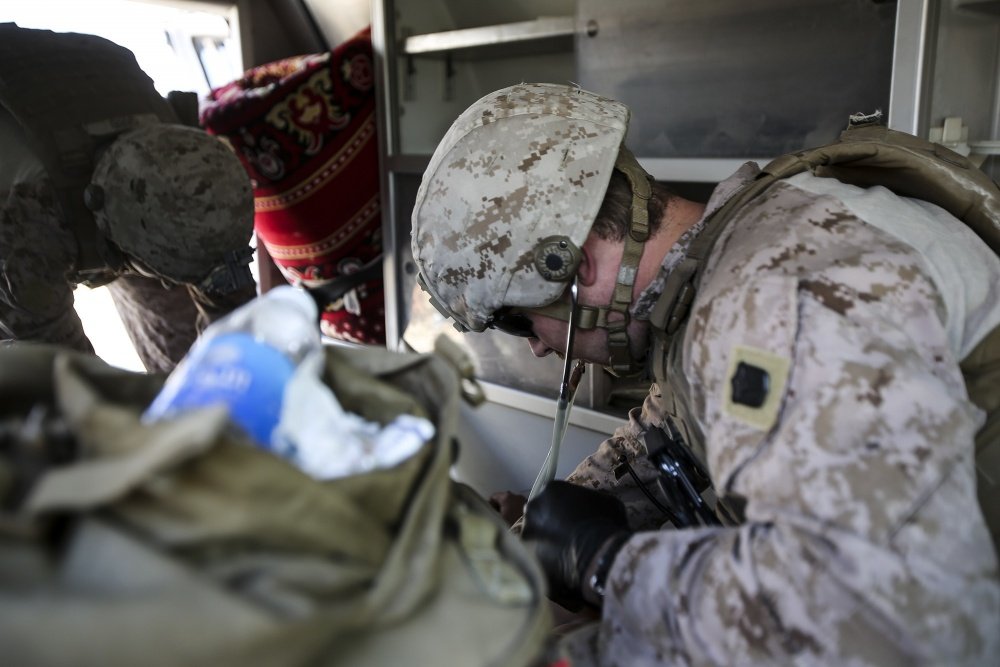 And I thought about 9/11 as I remember it, and I’m just old enough to remember. I was in 6th grade. We didn’t turn on the TVs. The school didn’t even tell us it was happening. I went to a small Catholic grade school in Dallas, a major hub for American Airlines, ad a lot of the students’ parents were pilots. My mom taught there. She told me later that the principal was emailing the teachers throughout the day, keeping them updated, but instructing them not to talk about it with students. We knew something was going on though. Kids who filtered in late throughout the day from doctor’s appointments or whatever else had heard the news on the radio. But 12-year-olds aren’t so great at relaying information and rumors spread that the Empire State Building in New York or the Washington Monument in D.C. had been hit.

I remember the days and weeks after: America mourned and a fierce spirit of patriotism and loss permeated the country. I remember the anger, anger like I had never known growing up. I remember learning for the first time about the Middle East and Islam. I remember the anti-war protests in February 2003 before we invaded Iraq, and the other anti-war demonstrations that followed. I remember Cindy Sheehan and the Dixie Chicks and speeches at the Oscars. I had an aunt who took me to meetings where speakers warned of a possible American intervention in Iran. And then I was in high school and still didn’t really understand, except that I knew people were worked up. I remember falling into liberalism, almost accidently, watching late at night as Jon Stewart late dissected and decimated the bungled war effort. I remember learning who Bob Woodward was, not in a history lesson about Watergate, but from his books about Iraq and his blurb for My War, by Colby Buzzell, the first war novel I read.

I remember an indescribable energy in the country—and in my own life—during the years after 9/11. A hyperawareness of the world around us, and an… aliveness that today feels almost mystical. The energy seemed born out of sudden awareness of a new and dangerous foe, as though the country was invigorated by a purpose, like one on the make.

But there was none of that energy here in the baked brown hellscape of Twentynine Palms, the desert California city that Army rumor and lore held was unlivable. That branch had deeded the land to the Marines. And there the energy seemed to die. New wars gave the Marine Corps a new sharp edge, knocked off the rust that had gathered since Grenada and Desert Storm. But that edge seems to have then been dulled by repeat deployments, mounting casualties, and goal posts that kept moving further and further away.  All that remained for me in the energy’s fading days was my own anxiousness to go to war led by NCO’s who, in my eyes, were heroes and giants. But heroes and giants fade too, and ten years on, on that decade anniversary of 9/11, they seemed so incredibly tired.

Old West Pistoleros and My Love of Machine Guns

Being Hunted by the Sadr City Sniper 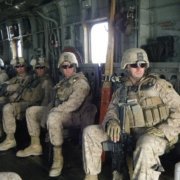 Guns, Booze, and Suicide: How “Stupid” Saved A Life
Scroll to top