I watched the infantry platoon on a drone’s black-and-white camera feed. The bird’s-eye view showed hulking Strykers escorting route clearance vehicles in Sadr City. They looked like slow-moving beetles guarding creeping praying mantises with outstretched arms, searching for bombs. The route clearance team had already found and detonated six improvised explosive devices in the past few hours, and they weren’t yet halfway through their mission.

We were in the middle of one of the most intense battles of the Iraq War. Weeks before, the Mahdi Army special groups had started launching missile after missile into the Green Zone. We had attacked deep into their territory and were working to establish a foothold. Just a few weeks before, one IED would have been a significant event; now we had six.

A seventh IED exploded, and I saw through the feed that 10 or so enemy fighters had joined in the ambush, spraying the platoon and vehicle with machine-gun fire. I jumped on the radio, rapidly relaying the information to the unit in sector. They had already seen the direction of the fire and shot back, hitting some of the fighters. I couldn’t tell if the enemy was killed, but I could see the Mahdi fighters dragging a few limp bodies as they ran away. A few minutes later the infantry platoon reported more fire. The drone circled around, and we spotted a pocket of three fighters down the alley firing shots. They ran away before we could fix their position and kill them. 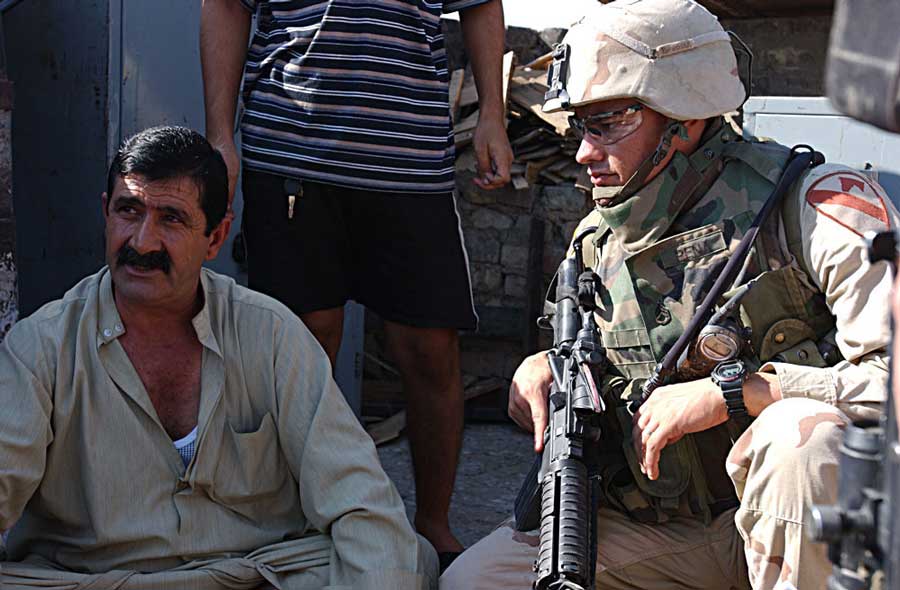 A resident of Sadr City informs Staff Sergeant Oracio Pena, A Company, 2-5 Cav, where the Army might find improvised explosive devices. During Operation Iron Fury in 2004, members of Task Force Lancer talked to residents of Sadr City to better understand their relationship with the Mahdi Militia. Photo by Sgt. Benjamin Cossel, courtesy of the U.S. Army.

I was in the command post with the battalion commander and a few operations officers. We were about 300 meters from the teams in the fight, directing our drone asset to fly to the right and left of the infantry and route clearance team. We were looking for the enemy fighters who were running around. The drones had Hellfire missiles, but we were trying to use the drones only as a visual aid to direct the fire of the infantry platoon. We didn’t want to waste a Hellfire on two or three people.

I thought about the soldiers in the route clearance vehicles. Those heavily armored four-wheel vehicles, 10 feet tall and 15 feet long. Some had huge plows; a couple had long hoes in the back, like arms—all designed to find and destroy mines and IEDs.

The team’s job was to go up and down a street and clear out all the bombs. They had such giant balls to do this that I thought they all had to be insane. Out in sector, they were sitting ducks. They were so intensely focused on finding and destroying IEDs that they ignored the bullets pinging off their vehicle from the Mahdi Army fighters. And if they didn’t find the bombs, they were dead. It took courage to be an infantryman out in sector battling, but this was next level. I said a silent prayer of thanks that these men existed. I also made a mental note that we needed to write up the whole platoon for heroism medals—I had been blown up five times in the entirety of my first deployment, and these soldiers had already had seven in one night.

I turned my attention back to the drone feed. The drones could zoom in on these fighters, show the outlines of a face, but not the features. The black-and white-footage was fuzzy, ghostly even. I could see the fighters’ AK-47s and their clothes flapping around them as they ran. I could see them raise their rifles to shoot at our platoons and then run away. But I couldn’t really see who they were or what they looked like. 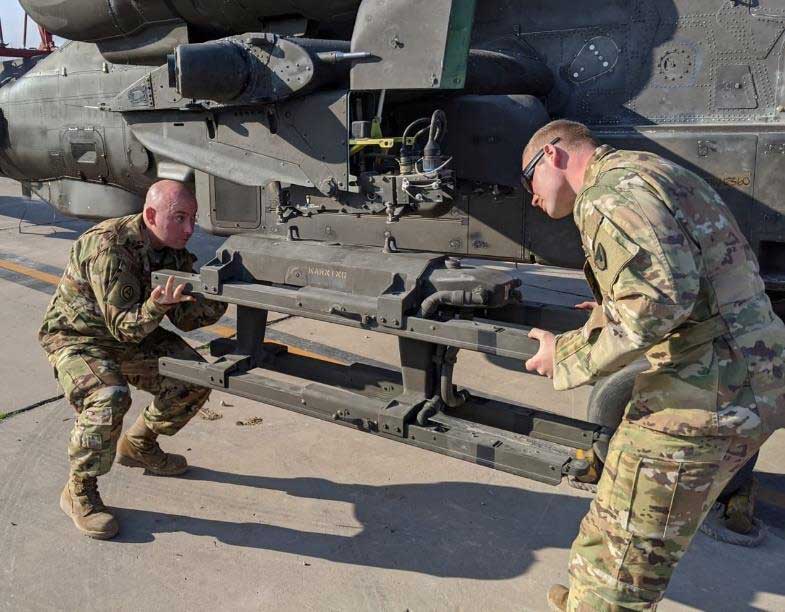 The route clearance team was relentless, inching its way up the street. The evening was measured one IED at a time.

The enemy fighters got lazier and lazier. We saw another group of three hold their rifles down the alley, fire a few shots without aiming, and walk off with their AKs dangling casually by their side. Were they getting bored? I wasn’t sure, but we followed them with the drone. That group met up with three other fighters. I could count five AKs in the group of six fighters. The drone circled, staying with the men. More fighters joined. Some had AKs, some did not. It looked like one was carrying a tube. A rocket-propelled grenade launcher? After a few minutes, more joined. There were so many I couldn’t count how many were in the frame of the drone feed, but it looked like nearly 30.

Butterflies fluttered in my stomach and I clenched my jaw. I was excited, my breathing quickened, and my heart raced. Nearly a platoon of enemy fighters was in our sights. I looked around the command post and saw faces tense with eagerness. A fever, hot and frenzied, seized the group. With one shot we could kill the entire platoon that had been harassing our soldiers all evening. The enemy swarm was talking and a few started smoking; their hands gestured up and down as they spoke with each other. Their weapons were held loosely and pointed toward the ground. The minutes clicked by. What were we waiting for?

I looked at my commander expectantly, waiting for him to give word to launch the Hellfire missile. I was so excited my breathing was getting out of control. I was nearly gasping as if from a hard run, but my boss looked calm and steady. His eyes were pinpricks of ice, and he didn’t look at us, just at the screen. We waited. He waited. I realized he was giving them time. He wanted to make sure everyone who was coming was there. He wanted to kill all of them.

Minutes passed. When he was sure no one else was coming, we fired a Hellfire. 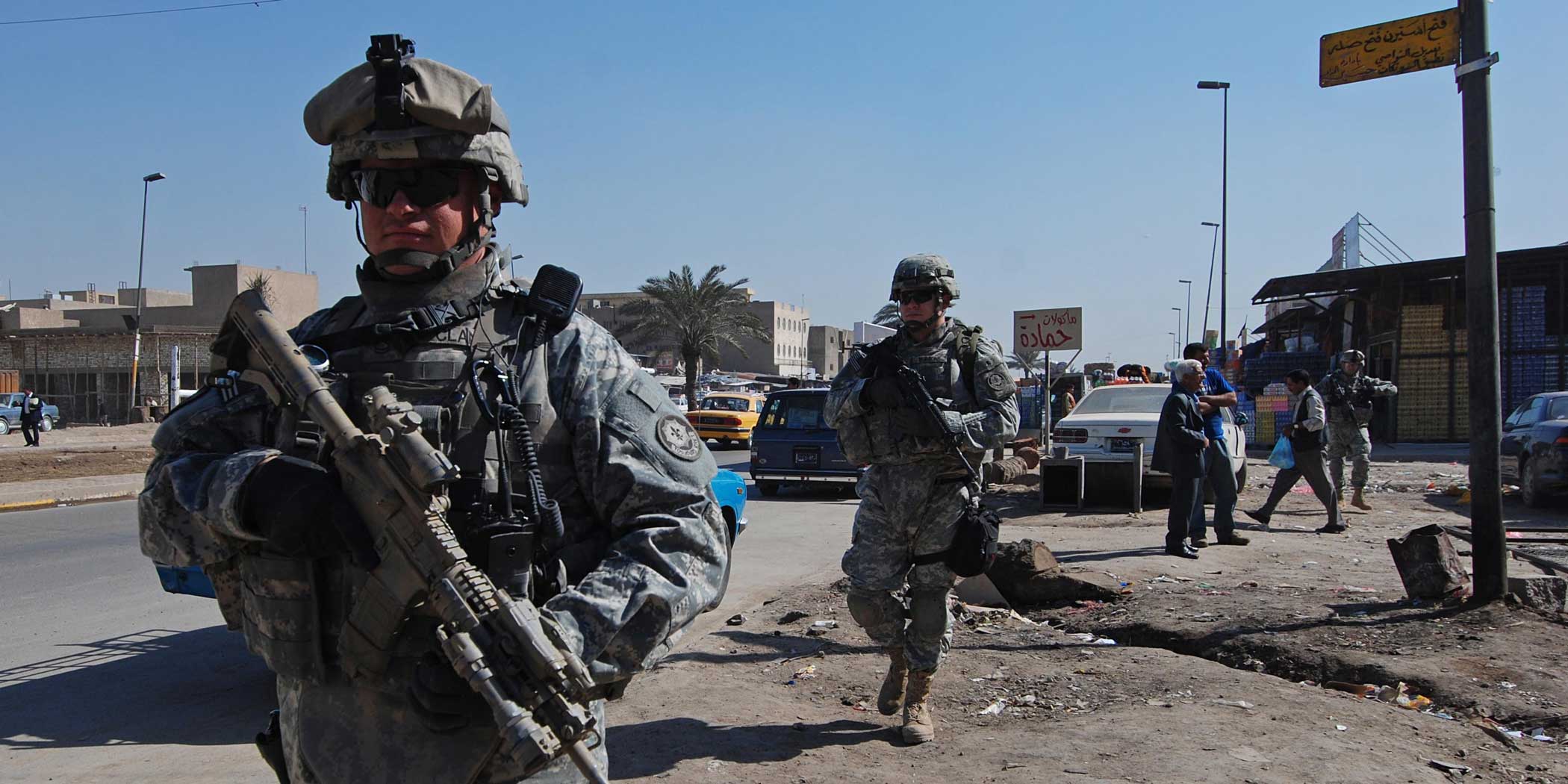 Sgt. 1st Class Timothy Clanin and a platoon sergeant with Headquarters Troop, 1st Squadron, 2nd Stryker Cavalry Regiment, lead their soldiers on a patrol through the Jamila neighborhood of Sadr City in 2008. Photo by Sgt. Michael Pryor, courtesy of the U.S. Army.

The screen went blinding white for a split second, the heat from the missile clouding the optics. Then the picture returned. We saw the fighters dash away in every direction. They were well-trained and must have heard the missile launch. But it’s hard to outrun a missile. There was a white blossom as the Hellfire hit the group and the image faded for a moment. When the screen came back the first thing I saw was a mass of mangled bodies and a few fighters staggering. It was impossible to know how many we killed, but we had hit right in the middle of the platoon.

The room erupted into cheers. We started high-fiving and clapping each other on the back. I felt an immense sense of relief as my body relaxed and my chest expanded, allowing deep breath after breath. Like a huge vise had been released from my lungs.

My eyes were drawn back to the drone footage, and I noticed a torso. While we were celebrating, it was moving, crawling its way across the ground. Like a half-smashed bug, it kept crawling for a couple of seconds, bleeding to death. Then it stopped among all the other carnage. Another soldier came up to give me a high-five; I turned away from the drone feed, grinned, and slapped his hand. 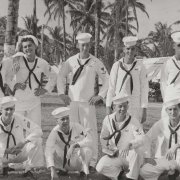 Operation Straggler: Their War May Have Ended, but They Weren’t Prepared for Surrender

“He Tried to Kill Me in His Sleep”—a Military Spouse Learns How Gridlock Gets You Killed
The Surge Nobody’s Talking About: The U.S. War in Somalia

Moving Again. And Again. My Experience as a Military Spouse.
Scroll to top