Hypothermia mists uncurl from the hillsides. The white slopes of the volcano golden. We’re late.

“No, I’m not giving you the beep-beep today.”

I hand my two-year-old the key fob. Beep, beep, beep goes our Kia. I’m certain it’s waking up the entire neighborhood, but it gets my kid in the car.

The work of peace, the daily grind, the quagmires of parenthood can be exhausting enough. Who needs war? 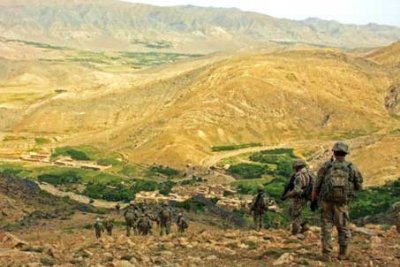 Soldiers descend into the village and orchards of Nerkh, Wardak province, Afghanistan, in 2009. Photo courtesy of Eric Johnson.

On any given day I can look out my bedroom window and count the rows of cherry trees. Note the flaring lemon, orange, hemoglobin red of their shedding leaves. The pinkening spindles of their winter branches. The eye-searing splendor of their spring blossoms. The tangy pop of their summer fruit. The shriveling of that fruit when the sun shines for 60, 90 days without end, and then a heat dome parks itself overhead, and you can do nothing but watch your crop wither on the bough and hope insurance covers it. If you even have insurance.

I’m new to these rainless summers of the West. I’m a boy of the East. The yellowing of the sky right before an afternoon drenching is my familiar. Except when that thunderstorm is so powerful its hail dents the tops of cars, cancels flights out of Dulles, slams the top half of a maple into the side of your house, and shuts off the electricity for three days straight.

The only similarity between where I used to live and where I live now is that they’re both about an hour’s drive outside a major coastal metropolis. Which means the city people come out on the weekends. Bringing their money, their fancy cars, and their germs. The blues venture out into the reds to get a little of that fresh country air, partake of the vineyards and agritourism. Then go back to their crowded suburbs, traffic, and respective rat races of school, success, and making money. At once disparaging country people for their backwardness and lack of cell reception and envying their proximity to nature and the peace of mind this is thought to bring.

But you and I know the thinness of these stereotypes, don’t we? Country people and city people—both judging and misjudging one another.

The countryside, in particular, in truth, is as much a place of peace as it is a place of war.

The mists flow like rivers between the mountains. A sole star glimmers in the cobalt rim of the sky. I unclip my night vision and tuck it away.

The wadi below us is cavernous. Our Humvees uncircle and half-jostle, half-slide down the steep muddy path, our guns and our fingertips still smelling of carbon from the night prior.

We drive a few minutes into the hills, then stop. I’m stuck in the turret while a squad of dismounts heads up the nearest spur to conduct a battle damage assessment. Not, I hope, in the process treading over the same ground where the white phosphorus, or Willie Pete, dropped. Even the residual powder can be lethal—it can still be kicked up and inhaled and burn the inside of your lungs raw.

Crimson cliffs rise on my left. Scanning the tops of them with my gunner’s eye. Hill faces thickened with pine and cedar and boulder outcroppings—common cover for this ambushing enemy of ours—tower on my right.

I’m glad we weren’t in the wadi when the firefight broke out last night. 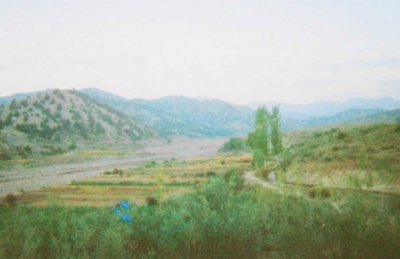 Taken in 2006, a Monet-esque photo of a road in Paktika province heading toward Pakistan comes from a disposable camera. Photo courtesy of the author.

The dismounts find only drag marks in the dirt. No bodies. The insurgents often take their dead with them back across the border. To Pakistan.

Not much grows, or grew, in the klicks-wide scorch of Bermel Valley. The bazaar on the road to Orgun specialized in timber trading. All of the timber came from the mountains along the border where, thankfully, most of the fighting took place. Far enough away from most civilians.

Tiny hamlets grew along the border. Clinging to their tribal customs the same way their qalats clung to the cliff faces. A handful of families. A few hundred souls, at best. Bearing the suspicions and retaliations of both American and Taliban forces.

The reek of diesel.

I’m pouring it across the inside of one dwelling. One family—a man, a woman, and children—stand outside with what belongings we see fit to dump at their feet. Their home—suspected staging point for Taliban attacks—goes up in flames. Their goats are gunned down and left to bloat in the sun. We drive back to base, plumes of retribution rising in our rearview.

Beauty parlors open in Kabul. A woman dons a police uniform. Another, a taxi driver, dares reveal her wrists. Burqas, of course, are a thing of the past. A new sun shines down upon these grimy, bustling, war-worn streets. A new future. The Afghan Girls’ Robotics Team earns international recognition. Some women even sport blue jeans.

But as an American infantry soldier, destined for the fight, I’ve never been stationed in Kabul because, during the years of our occupation, there is no fight in Kabul. Nothing except for errant rockets and assassinations via suicide bomber.

On another deployment, we’re an hour southwest of Kabul but we might as well be another planet away. A woman in a blue burqa squats alongside a litter-strewn ditch outside Maidan Shar. Never more than an arm’s reach from her mahram, a male escort in his mile-high turban. The countryside is where the white-hot heart of the Taliban has always beaten strongest.

A few klicks from Ring Road, up against the mountains, my squad and I are patrolling through orchards, clearing the northern side of a road. The IEDs of which have sent a number of us home early. Some in casts or bandages. Some in transfer cases.

The boughs of the trees droop—thick with freckled apples, baby-fuzz apricots, and pomegranates like fists. We fill our cargo pockets with the bounty and wave at the farmers sitting against their walls, shielding their eyes, watching as the juices of their livelihoods soak into our chin straps. The farmers smile and wave in reply. 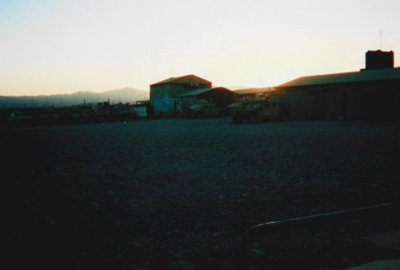 The sun rises over Forward Operating Base Bermel, Paktika province, Afghanistan, in 2006. Photo courtesy of the author.

The sacks of ammonium nitrate the farmers use to fertilize their fields are often, in turn, buried in the road to form IEDs of such size and power they crack the hulls of our new mine-resistant ambush-protected vehicles. Sending entire bushels of us home at a time.

My men and I help one another cross a wall separating fields. I’m staying in radio contact with the lead truck, inching down the road behind us. We’re searching for any wires, any sign of violent intent.

A guy on a cellphone draws our interest and our rifle sights, but he disappears.

The farmers siphon water off the mountainside into gleaming irrigation canals they control with globs of mud or slabs of stone. I imagine some of these field terraces are probably centuries old, passed down father to son. But, in truth, most farmers are sharecroppers; they don’t own the land they work. A khan, or former warlord, or, perhaps, Afghan government official owns the land and hoards the profit of it for himself.

I fish another apple out of my cargo pocket. My teeth snap into its skin. The taste—like sunshine distilled into honey, and that’s when the IED goes off. My brain pops like a kernel. Molars rattling. I drop my apple.

Pop shots in the distance. A neighbor’s target practice. My coworker asks me if I hunt. No, I tell him, I’ve never hunted. The next day he gifts me some of his leftover venison.

That’s where I used to live. 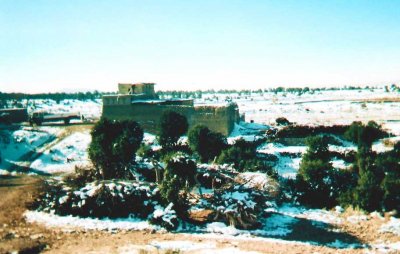 Snow covers a home in Mangritay village, Paktika Province, Afghanistan, in 2007. Photo courtesy of the author.

Where I live now, the grass greens only in winter. The water in our pipes melts from the slopes of a slumbering volcano. Already the bare branches of the cherries bud with the promise of spring.

Agriculture. Nature. Escape. We all rely on the countryside. Though the opposite is also true. How many country kids dream of life in the city? There are many forms of sustenance and of trade. Whether on the West Coast or back East, in the heartland, in the cities or exurbs, in America or Afghanistan, our lives, our perspectives, pivot about our surroundings, move to the tempo of the local weather, to seasonal tilts and daily planetary rotations, toward hopes for the future, away from wounds of the past.

Peace and war persist in conversation with one another, and in no time or place have I found this truer than in the simmering insurgencies of Afghanistan’s south. In the predominantly Pashtun countryside where most Operation Enduring Freedom combat troops found themselves.

The nighttime mists clear. A songbird alights on a branch, puffs its chest, and belts out some improv. A young Talib awakes, swipes the sleep from his eyes and the dew from his gun.

They Are the Good Guys With Guns. After Another Mass Shooting, Veterans Want...
Scroll to top