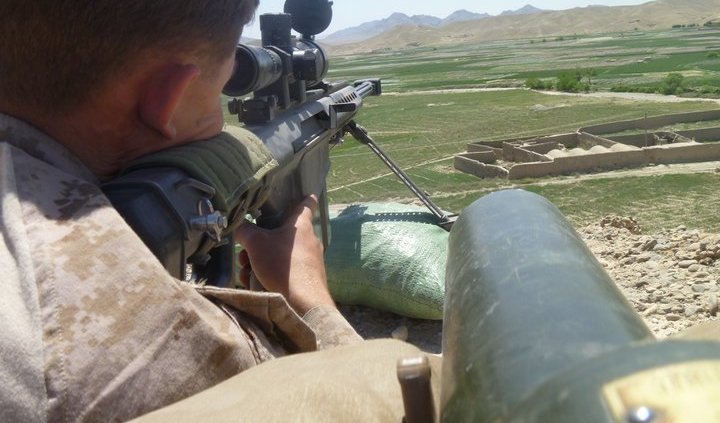 Peanut butter M&Ms made math class a little less like torture. School was abuzz with activity. Kids bustling thru the halls, high school gossip and girls chirping about cheer practice. Two boys blew past me in the hallway. As I entered the school store, they rushed in through the far door and ran straight up to the counter where a clerk stood. They said something in a panic, but I couldn’t hear it and didn’t really care. The clerk urgently headed straight for the TV.

“What can I get you?” asked the pretty girl on the other side of the register. She flashed me a smile my 15-year-old brain couldn’t compute.

“That’s fake bro—Hollywood stuff!” The shouting snapped me out of my daze.

I couldn’t see what they were looking at on the TV. Everyone was crowding around and shouting, but it just seemed to be the usual kid chaos. 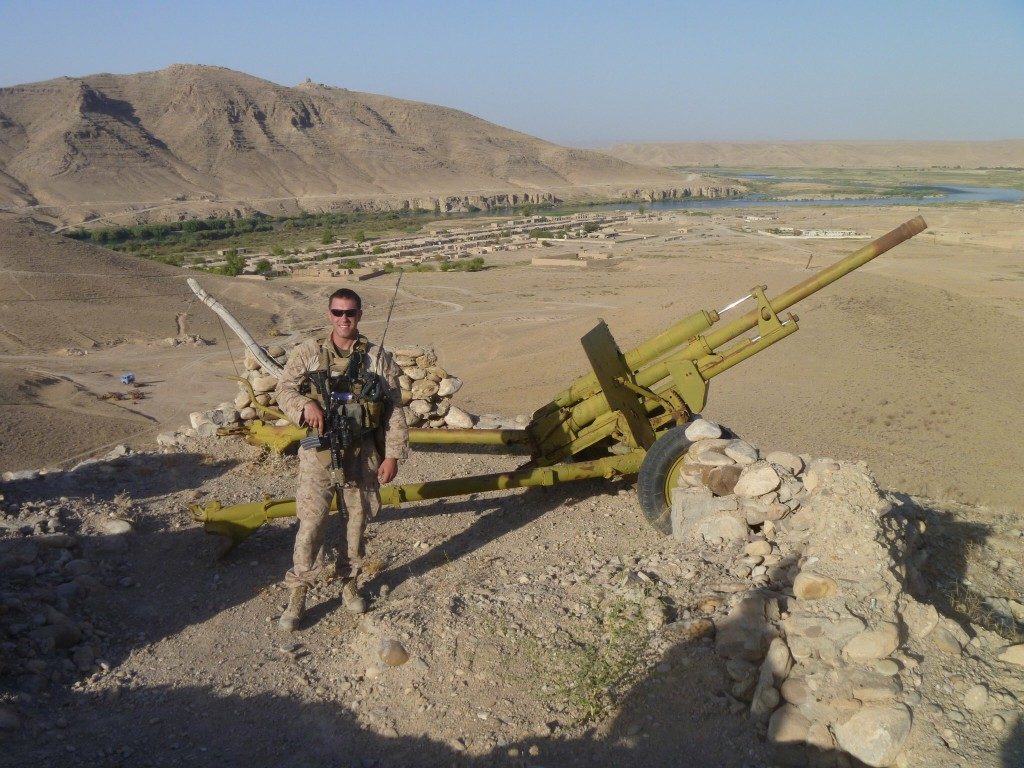 Michael Penney stands beside Russian artillery during his 2011 deployment to Afghanistan. Courtesy of Michael Penney

Grabbing my snacks, I took off out the door and darted around the corner. I zigzagged through “eyeball” alley munching on my first bag of chocolatey goodness. During the winter the cheerleaders practiced in the long stretch of hallway while wrestlers gawked from afar; hence: eyeball alley. I hurried down the hallway into class and took my usual seat just as the bell rang. Sitting in front of me was an angel. A wavy haired blonde angel. She smelled like strawberries. Was it her shampoo? Does she just naturally sweeten every room she enters? I guess there were some things I missed about school during my summer break.

Mr. K entered classroom, briefcase in hand; he called for attention, “Hey everyone, let’s get out last week’s quiz for review.”

None of us were interested in studying for the upcoming test that none of us wanted to take, so we were slowly shuffling through our papers when the girl from the school AV department came blazing in with a media cart.

She plugged in the TV then centered and straightened the black-framed cart at the front of the class. A CNN special report flashed across the screen, and all of our innocence rushed out of the room as we watched, in live horror, the second plane hit the World Trade Center. Gray plumes shot out either side of the building in magnificent display—and we saw it, sitting there in that room. 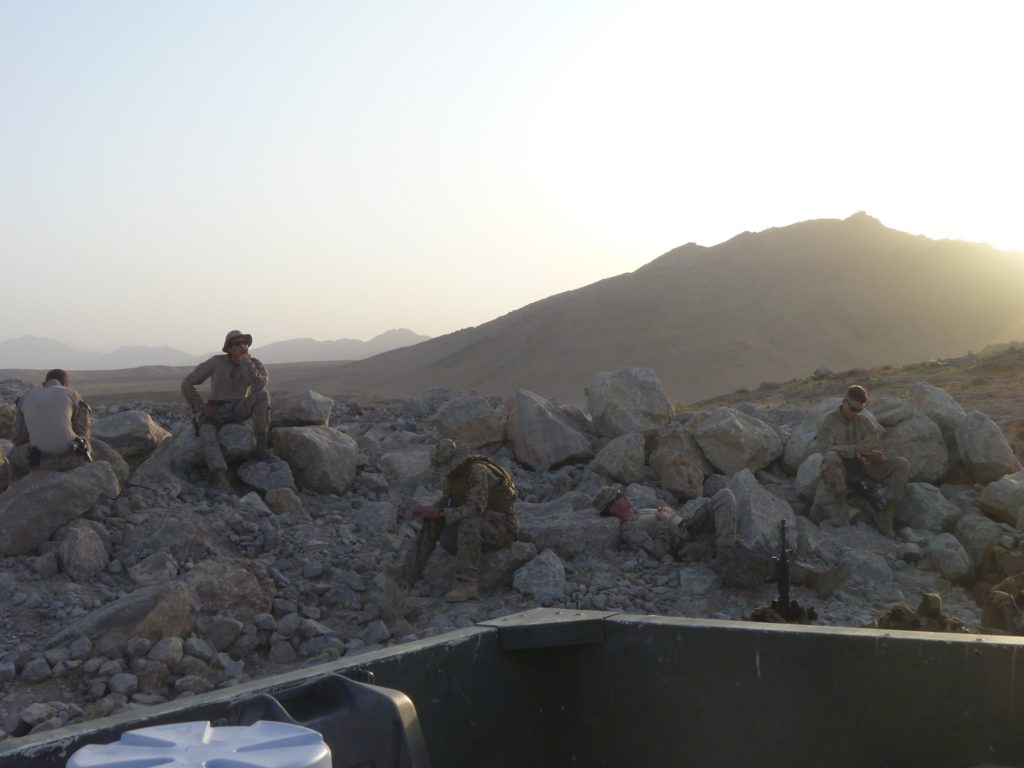 Michael Penney patrolled alongside his squad of Marines through canals and over mountain ridges on the tenth anniversary of 9/11. Courtesy of Michael Penney

I got home by 1 p.m. and packed the car with supplies in case of an emergency evacuation. The guns were loaded and we were ready by the time dad got home. He was proud. Mom came rushing in with the same questions we all had.

What is going on? Why would anyone do this? Who was this?

Terrorists, on our soil.

This was an act of aggression. An attack of this magnitude hadn’t occurred on U.S. soil since Japan bombarded Pearl Harbor. But Japan was a sovereign nation. This was an attack from a faceless foe. One that I could and would learn to hunt and kill.

2005. The Global War on Terrorism was in full froth as our unit, 3rd battalion 7th Marines, was deployed to one of the most dangerous places on earth, Ramadi. September 7th I saw the city for the first time. That sight will stick with me forever. Scarred buildings smoked and smoldered. It was a brutal place. A modern day Stalingrad, Ramadi was under siege. On September 11th I ate lunch with a Lance Corporal from the motor pool. We’d been working on putting a new windshield into a blown-up HMMWV. He shared a story about “Hurricane Point” that I hadn’t heard before. This little base we’d been operating out of used to be Saddam’s son’s twisted getaway-spot.

We walked back past a marble building near the middle of base. White and tan blocks made up the 12-foot walls that formed a shape resembling a capital letter “I” when viewed from above. Tight corners sharply angled into a central corridor. At either end were barred windows that could view every angle. Embedded in the wall were D-rings used as anchor points for a length of chain to run through.  In the middle was a drain.

The Lance Corporal told me this was where the most heinous acts took place.

“Two tigers chained to either end. The victim, more than likely an enemy of the state, was brought in and tossed into the corridor to face the beast without a weapon,” he said.

“Bullshit!” is the only thing I’ve got for him. “Whatever, Schmeckatelly, that’s some bogus shit.”

“Believe what you want to. I heard it from a reliable source,” he said, heading back to the motor pool.

That night my buddy Josh came back from the Hajji Shop with fresh bootlegs in hand spouting off about the craziest story he just heard from the old man—about how his brother had been fed to a snow white tiger in Saddam’s son’s compound. 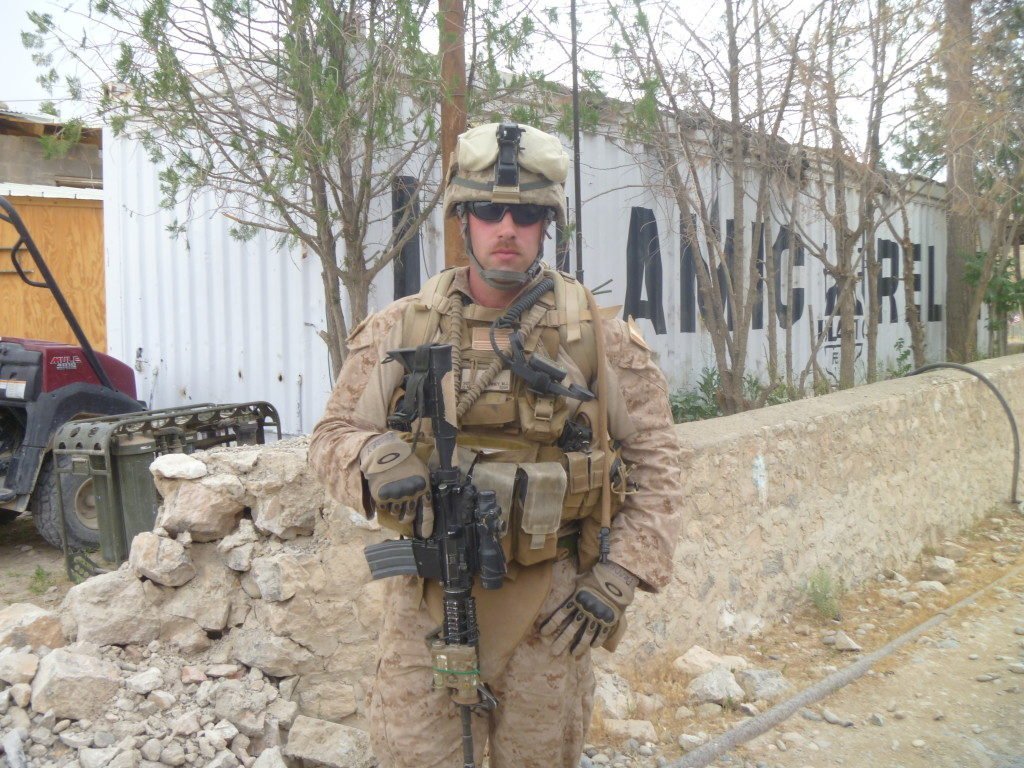 September the following year my battalion embarked on mountain warfare training. The rumor was we would be heading to Afghanistan. I had wanted to make an Afghan deployment in my first enlistment. I had wanted to go and to fight the Taliban.

In the Sierra Nevada mountains south of Tahoe sits Bridgeport California. The Mountain Warfare Training Center is located along 108 in the Toiyabe National Forest. It’s unbelievably gorgeous up there. At 8,000 feet there’s a parking lot you can make camp and set off from. That’s where we made bivouac during the first phase of training. September 11th, 2006 we held a moment of silence for those who lost their lives during the attacks. It was an autumn training package to prepare us for, what we hoped would be, an Afghan tour this time. That wasn’t the case.

The gym on Hurricane Point was packed the night of September 11th, 2007. We were all getting yoked, pissed off we didn’t have any enemy to kill. Ramadi 2, as we started calling it, was worse than the first tour because nothing was happening. We had hanged Saddam over Christmas and the war in Iraq had stopped. At least in Ramadi. The Iraqis ran a damn marathon in the city. Mattis walked the streets without body armor. We got yoked in the gym and cleaned guns.

The latter half of 2008, and all of ‘09, was a drunken blur. My ol’ lady from the first marriage left with the kids. Thursday, September 11th, 2008 I spent the day having drunken sex with a 21-year-old volunteer firefighter named Stephanie. She rode horses and did yoga. That woman saved my life. Next year, ‘09, was a Friday that involved too much tequila and a walking-rant thru the Fredericksburg mall. Sloshed, shit-housed, smashed, hammered. Intoxicated and giving the world a piece of my mind. No joke, I went off the deep end. It was the hangover that I remember most.

Fall 2010 I was in a work up with the police advisor teams. September 11th we were in the field. It was a Saturday. Look it up, check the day, I remember—that sucked.

My boots were walking thru Afghan soil September 11th, 2011. We had been in-country for five months and were gearing up to leave Kajaki. We’d worked with the police in the area and grown to love some of the guys. My Afghan police counterpart, Abdul Hadi, had a family only six miles north of the station but didn’t dare to travel and see them. That would have guaranteed their deaths. The whole area lay under Taliban rule. He had been working alongside the chief all that time struggling for nearly a decade to regain a foothold in the region. That September 11th he apologized for “all of this.” As if he’d personally rung up G.W. and ordered the invasion himself.

Each year since the attack I’ve taken a moment to reflect. I’ve been bombarded by the noise lately. Being in the Corps provided some separation from the chaotic onslaught of everyday survival. For the most part, we walked around the hills of SoCal living out of backpacks. We didn’t sit in front of our computers for hours composing stories for our buddy’s online news outlet.

The world now is full of chaos: everything from conspiracy theories of a new world order to economic hitmen taking out whole economies. September 11th was an utter tragedy: Two planes hit two buildings in New York and 2,606 people died there. Between the other two planes and the Pentagon employees, another 390 people died; 2,996 in total. What a terrible thing to ever forget. So I take the time to mourn it, because I still can’t believe it. That moment when it all came crashing down.

When I left the Corps after eight years and three combat tours, I took with me two sets of boots. I took the left boot from the one set I’d worn on my deployments to Iraq. The right boot came from the tour to Afghanistan. On either toe I’d written my deployment dates and the theaters I served in. The laces were tied together with square knots and with a large swing I hurled them up into the power lines right outside Camp Pendleton’s Christinitos gate. The other mismatched pair of worn out combat boots will be marked in a similar way and go with me to Ground Zero. A symbol of the service and sacrifice I offer to those I watched die from my school desk that day—sitting there in that room. 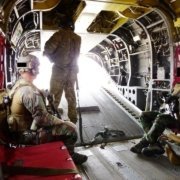 His Closest Brush With Combat Was a Dramatic Helicopter Landing
She Swallowed Hard, Shed Some Tears