Photos and Text by Nathan Webster

Bone shards poke through the skin of the Iraqi sheepherder’s foot. A rifle round had entered the sole, exited through the top. Off-white splinters surround a small hole. Blood drains in a flow between his toes.

A second round carved a four-inch furrow on his back, serrated it open to reveal pink and white capillaries. There is not much blood at first. Then there is a lot of blood. The medics sop it up with gauze and wet towels.

When he arrived on the stretcher, the sheepherder’s hands had been cuffed with plastic zip ties. The medics move him to an operating table, cut off the flex cuffs, and lay him flat to work on his back. Then they roll him over and prop him up to clean his foot. 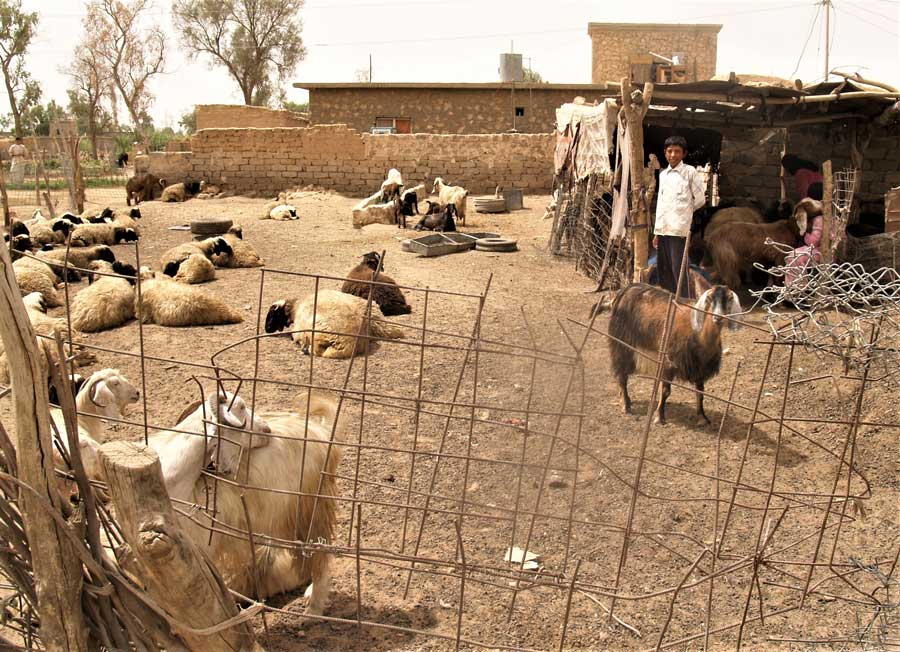 The sheepherder looks down at the exposed bones. He inhales and exhales a few deep breaths.

Six medics work on him. One hooks him to an IV, and others get bandages and tools from drawers and cabinets. A half-dozen other empty beds sit in the medical aid station at Forward Operating Base Summerall, on the city outskirts of Baiji, Iraq.

Nobody shows much emotion. No malice appears in anyone’s attitude. Expressions don’t register above professional responsibility.

Even the sheepherder doesn’t seem to hold a grudge. He pantomimes for water, holding his hand to his mouth in the universal language of “thirsty.”

READ MORE
You Have Not Seen The Last Of These Marines

A medic nods, tries to make the sheepherder aware he understood.

“In a minute,” he says, and he waves a hand over the foot and the blood. “Let us do this first.”

An interpreter has arrived and is told to ask the sheepherder why he tried to sneak through the sand berm surrounding Summerall, guarded by towers all around the perimeter.

The Iraqi interpreter is soft-spoken and calm. Despite the injuries, he and the wounded sheepherder have a subdued but normal conversation. 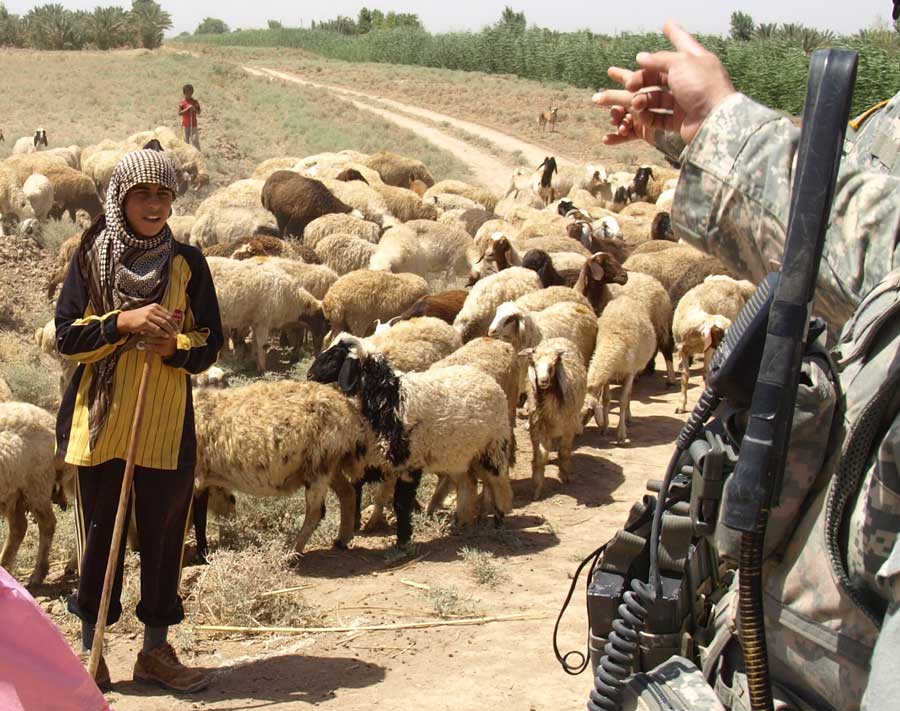 The sheepherder was with his herd. Maybe a sheep got past him and crossed into the restricted area; maybe he didn’t know where he was, didn’t realize the area was restricted. It’s difficult to decipher the quiet translation.

What’s done is done. The guard towers are visible from everywhere. Every Iraqi in the area knows they can’t wander onto Summerall. He may be a sheepherder, but he could also be an insurgent. From here, he will go to the detention center. Being unarmed makes it difficult to prove his hostile intent, but maybe the sheepherder risked injury for knowledge about how U.S. soldiers would respond to a perimeter breach.

Testing Summerall’s defenses in daylight could give Sunni insurgents an idea of what they can get away with and what will draw fire. The sheepherder was unarmed, but what he can see and report is a weapon, same as a gun. Is it worth $100 to take a chance for information? Five hundred dollars to a family?

The sheepherder takes a sharp breath as the medics probe the wound on his foot.

“Tell him he’ll get something for the pain,” a medic tells the interpreter.

The herder is shirtless, muscular, wiry. His hair is thick, long, and brown. His stomach is flat, his thin arms defined by solid biceps; he has hard thigh and leg muscles. Grinding work in a hot, hard desert makes a body look like this one. There is no American softness. 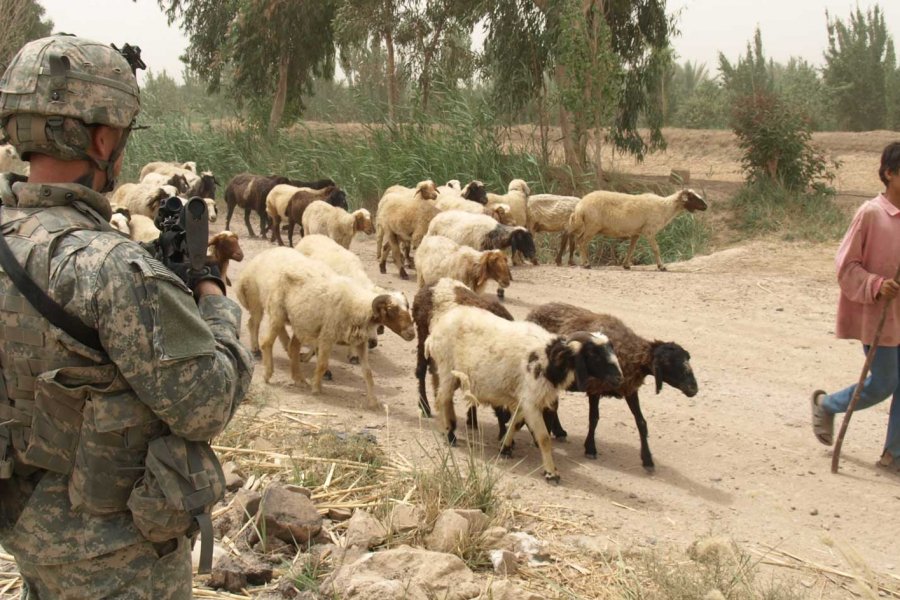 A young Iraqi sheepherder walks under watch of a U.S. patrol on the outskirts of Tarmiyah, Iraq, June 7, 2008.

He looks at the faces surrounding him, registering no different interest from one to another. His brown eyes are alert. The real pain will come later, walking on a mangled foot that first aid cannot heal.

“He was lucky,” says the battalion surgeon for the 82nd Airborne’s 1st Battalion, 505th Parachute Infantry Regiment. “He hit the ground when they started shooting. That saved him. An inch lower and that round goes right through him.”

Capt. Jerry Mitchell, my tour guide around Summerall during these first few hours of my reporting embed, brought me here because he was coming himself. He takes documentation pictures of the treatment of detainees, and he snaps a few shots with a small camera. I don’t have my camera, wouldn’t have been allowed to take pictures anyway. Yamamoto explains the role of the aid station—first aid, or a first step before evacuation to the surgical facility at Balad or elsewhere. Iraqi soldiers or police might be brought here, though the Baiji city hospital often treats the local wounded.

The medics keep washing skin and blood out of the small, almost neat hole in the sheepherder’s foot. Soldiers complain that the M4 rifle fires too straight to do enough damage. The best weapon sends a round that hits the target and starts tumbling—the messier the exit wound, the more effective the shot.

If they are about to cause pain, the medics try to have the interpreter explain what’s coming. The direct pressure around the wounds makes the sheepherder grit his teeth, but it slows the bleeding.

The medics’ movements come from training and from experience. They are careful with their tools and use lots of bandages. The sheepherder is their patient, and they do their best.

When the medics first got to work, one started the aid station’s CD player. They wash away the blood to the soundtrack of Journey’s “Don’t Stop Believin’.” The song’s writer, Steve Perry, let the producers of The Sopranos use it over the series’ closing scene after he was assured it would not accompany a gangster massacre. 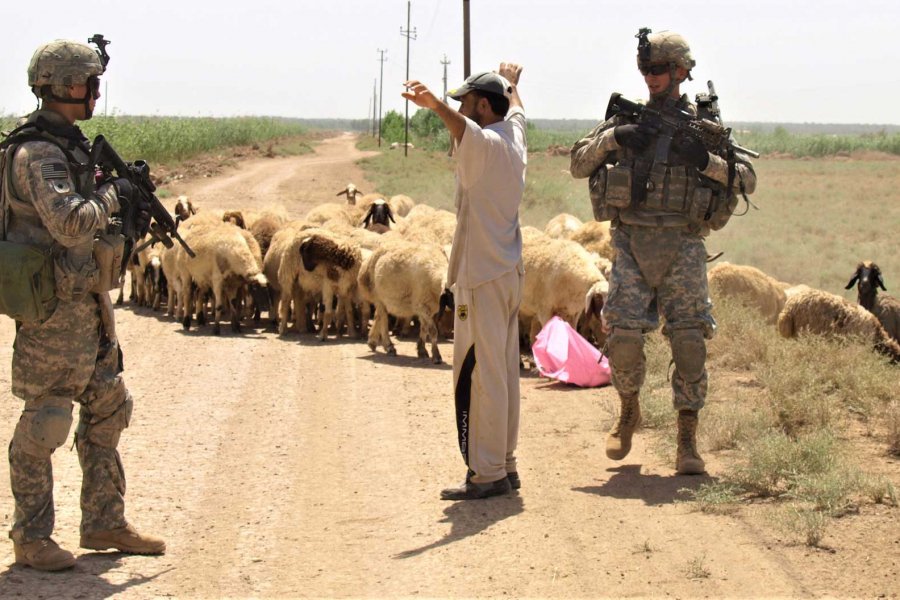 Soldiers of the 25th Infantry Division investigate an Iraqi sheepherder outside Tarmiyah, June 10, 2008.

It is July 16, 2007, and The Sopranos finale had aired just a month before. Back home, people had just begun complaining about the mystery of the show’s black screen conclusion.

The sheepherder looks older, but Iraq ages everyone so much, he’s probably in his 20s. From a life so hard and tough, what kind of inconvenience does getting shot by Americans measure out to be?

He acts no more upset than the medics, and the medics aren’t upset at all.

Steve Perry sings that everybody wants a thrill, that we’ll pay anything to roll the dice.

I arrived at Summerall four hours ago. Now it is 15 years later, and I wonder where you are.

Plastic bags fill with gauze soaked in your sweat and in your blood.

Taking Unresponsive Leadership To Task as a Black Woman Army Officer
Note to Self: When They Come for You in the Night, Don’t Give Up. Fight B...

I Had Seen What ‘Lock and Load’ Meant to This Drunk and Rowdy Rabble, and...
Scroll to top