The appointment of Lloyd Austin as the secretary of defense took me back to September 1969 and the end of my U.S. Navy enlistment. In considering the Austin tenure and 1969, I equate them because they represent and represented times that held tremendous potential.

In 1969, despite having enjoyed the four years of my enlisted time, I left behind active duty and a $10,000 reenlistment bonus. As I set off on my “new adventure,” I wondered if I had made the right decision. Unlike the indecision of 1969, the Austin appointment seems to be the absolute best decision that could happen.

Within a month of leaving the Navy, I used my GI Bill to enroll in a broadcast training program. No sooner had I begun that program than I learned that broadcasting, at the time, held few opportunities for a young African American who aspired to do something other than be just a talking head.

At the same time, I learned the Black United Front, a local political activist group, had challenged the broadcasting license of WMAL-TV, the local Washington ABC affiliate. As a result, the station was now looking for minorities for their intern program. I applied and was hired. 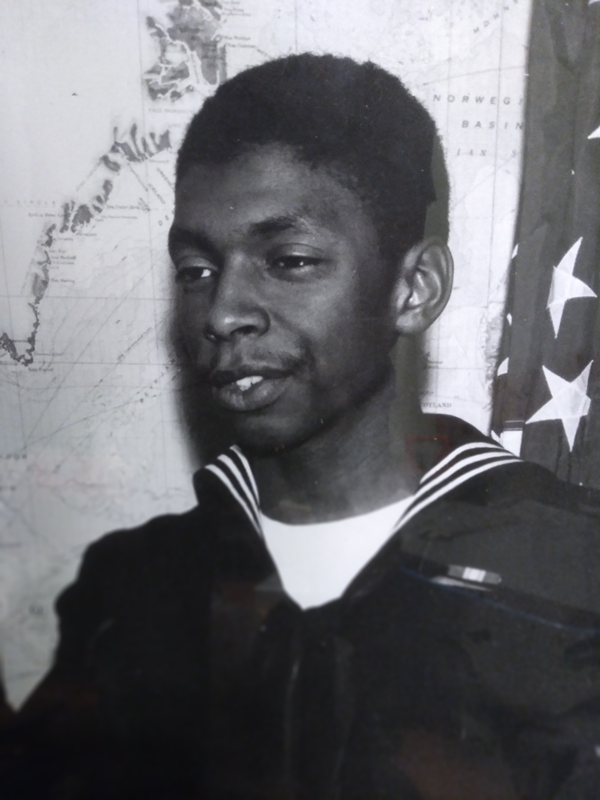 Gerald Collins as a young petty officer in 1968. Photo courtesy of the author.

At the station, I was involved in much more than what the broadcasting school offered. I was no longer a talking-head trainee. Instead, I was involved in all aspects of television production. As a member of the internship, I began to learn the fundamentals of TV production, set design, lighting, and video and film editing, as well as directing both in the producer’s booth and on the television set. Before long, I worked as a floor director on many of the station’s programs. Among them was the Clifford Alexander show. Alexander would later become the secretary of the Army in the Carter administration. Working with Alexander was a joy. Many on-air talents had reputations as primadonnas. He did not. He was approachable and, if asked, frequently offered advice on general career advancement—leaving the impression that he cared.

With that attitude and in that environment, before long, he knew about my recent release from active duty, and I, his time in the Army National Guard. Before long, he and I traded stories about military service.

“If you liked the Navy so much, why did you leave?” he often asked. “The Navy needs people like you.”

He routinely ensured his guests were aware of the backgrounds of the TV crew working on his show. If a guest were either a military or a government official, he would introduce us to them. Once, he introduced me to the former vice president of the United States, Hubert Humphrey.

During the intro, he made it a point to note those of us with recent military service. And, with me, he went so far as to tell the former VP of a photo I had taken with him as part of a group of sailors on the steps of the U.S. Embassy in London in the late 1960s. I had forgotten I had mentioned the photo to Alexander prior to Humphrey’s visit. As a result, Humphrey insisted I send him the photo so he could autograph it. The photo returned with a comment from the former vice president via Alexander, who once again thanked me for my military service. 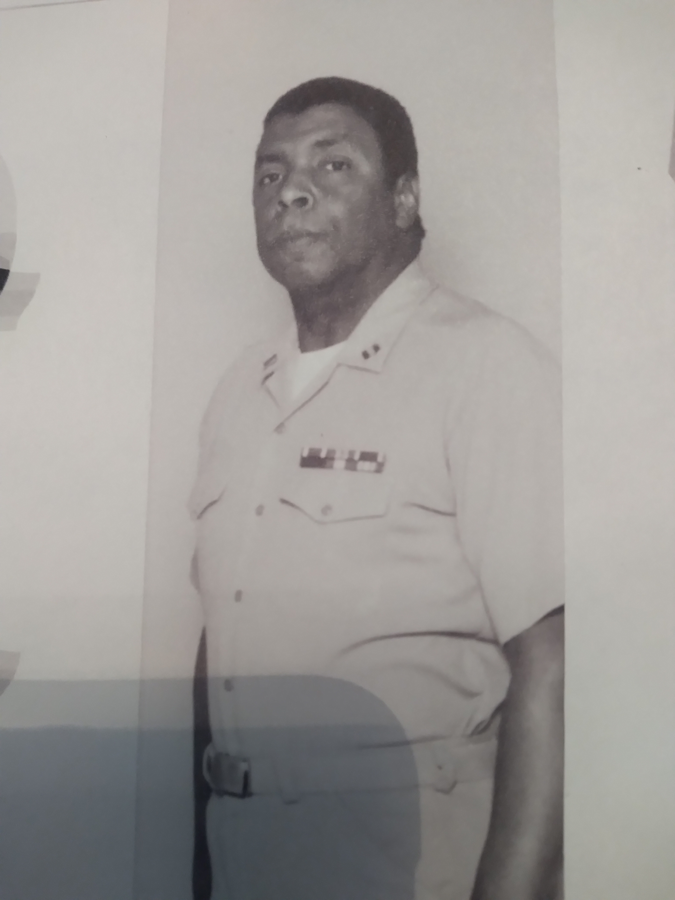 Gerald Collins as a lieutenant in the U.S. Navy after he transitioned from enlisted to officer. Photo courtesy of the author.

I was so impressed by that event that I began to consider rejoining the Navy. In 1977, I was sworn in as a Navy public affairs officer and returned to active duty. I left active service the second time in 1986 amid the downsizing that took place that year.

Careerwise, I have come to consider the years 1977 to 1986 among the most professionally rewarding and challenging of my working life. Looking back, I have had the opportunity to think about the challenge from Cliff Alexander to reconsider the Navy as a career option.

The year I was sworn in as a naval officer was the same year that Cliff Alexander assumed the reins as secretary of the Army. Not long after my swearing-in, I had a chance encounter with Alexander in the halls of the Pentagon.

I had known of his appointment, but he had not known of mine.

As we approached each other, it was obvious he did not recognize me until we were barely a couple of feet apart. With the recognition came a broad smile from him, followed by the simple statement, “I hope our conversations at Channel Seven had something to do with your wearing that uniform.”

“If only you knew!” I replied. We shook hands and continued our ways.

Years later, I learned of the role Alexander had played in making the all-volunteer force concept a permanent reality. In recalling our seemingly idle conversations while at Channel Seven about the military, it has become obvious to me that he had been an advocate of the concept long before it became a reality and before he became the secretary of the Army.

At the age of 76 and as a retiree, it is not likely that I will ever have an opportunity to meet Secretary Austin in person or work with him the way I did Alexander. However, I see in them both men of destiny who have been seasoned by experience and molded by fate. 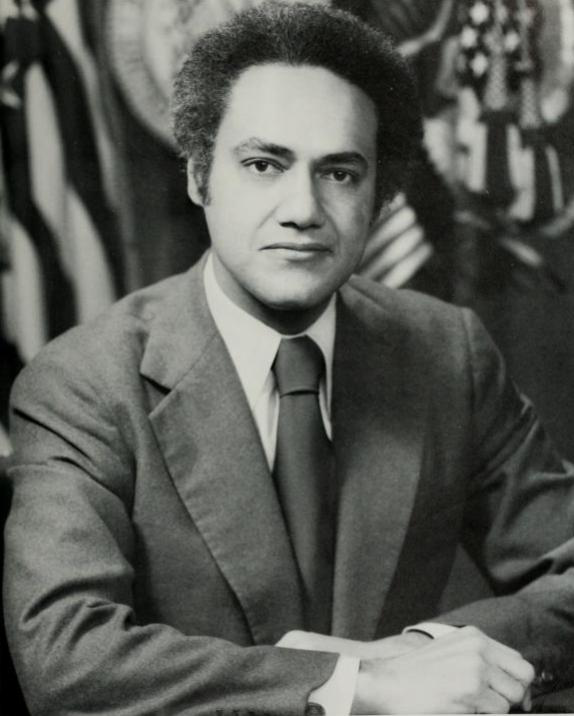 Clifford Alexander, under the Carter Administration, served as the first Black secretary of the Army. Photo courtesy of the Defense Department.

Among Austin’s first actions has been to request a review of sexual assault prevention programs within the military. Among then-Secretary of the Army Alexander’s many actions was the review he ordered on the use of women in the military and its impact on the all-voluntary force concept.

Both, while basing their actions on reports and observations, have contributed and are contributing to the overall professionalism of the U.S. military. Alexander’s influence was directed at the Army, and over time, its impact was felt throughout the military. Austin’s impact, on the other hand, due to his position as secretary of Defense, is expected to have a much more immediate servicewide impact.

I am extremely heartened about the tenure of Austin. Like Alexander, his actions seem to say he has the morale of the troops as his primary consideration. Far too many people have occupied those positions and made equipment a priority while relegating human issues to secondary or tertiary positions of relevance.

In an article I read a while back, Austin said of himself, “I certainly fully appreciate the fact that I am the first African-American to ever command a division in combat, the first African-American to ever command a corps in combat, and there are a couple other firsts before that. Certainly, when you have my job, you consider yourself to be a role model for a number of elements in the community, not just African Americans.”

Alexander inspired me at a time when there were few African Americans in television journalism, but then he went on to inspire and help others. I see the same for Austin.

No Shortage of Bad Leaders: Sailor Recalls Hostile Captain Who Set a Toxic ...
Scroll to top