Paso Robles, California, just after midnight, pulling into the Courtyard by Marriott parking lot in a junked-up old limousine, courtesy of the Pine Street Saloon. Another day of training in the books— and another night spent letting loose the inner beast. Paso Robles is a strange concoction of uppity, wine-swilling WASPs (white Anglo-Saxon Protestants) and ranch-working cowboys come in from the hinterland—and then, smack dab in the middle, we three sailors, ready to run amok in their town.

Helluva time to be sober.

(I had entered a stint of alcohol abstinence a few months prior to cleanse my body—and my soul—but more on that later.)

The lobby of the Courtyard by Marriott had all the trappings of a cut-and-paste hotel chain: an open floor plan that flowed from the front desk to the stale Starbucks cafe and then to the bar/lounge subregion, branded with vibrant carpets, eccentric accents, and modern wooden-paneled walls. Close your eyes and transport to any other Courtyard by Marriott—you would never know the difference. The déjà vu reality of military members on official travel. 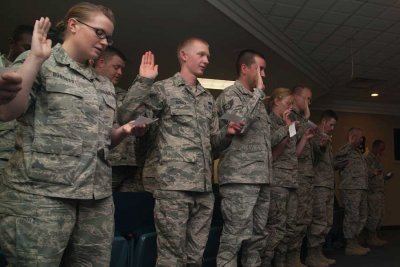 Members of Team Holloman participate in an oath ceremony at Holloman Air Force Base, New Mexico, where they pledge to either complete 30 hours of volunteer service or remain alcohol-free for 30 days. This Alcohol Abstinence and Volunteerism Challenge hopes to increase community involvement and decrease the number of drunken driving incidents in the wing. Photo by Airman 1st Class Leah Murray, courtesy of the U.S. Air Force.

As we spilled into the hotel, I noticed two wine-soaked souls at the hotel bar, slumped over in a manner familiar to anyone who has drunk on the road. This wasn’t the posture of casual drinkers grabbing a beer or two before calling it a night—no, these two were in the midst of a proper drink. Usually, this is the crowd you avoid at the end of the night: No comfortable conversation is to be had with such a cohort. Yet still, I made my way over to the bar, knowing full well this wouldn’t be a simple hello, even if it began that way.

“Well, hello, sailors,” Kate said, as we approached the bar. She sat with Tim, a former sailor and current contractor supporting our training. Still in their work attire, a mishmash of outdoor adventurer chic—what was known as “contractor attire” in our circles—the duo had made the transition from work to play without missing a beat. Tim made brief small talk but seemed more interested in the ESPN rundown on TV and the bottle of half-drunk cabernet on the bar top, leaving Kate to carry the conversational load.

We slipped into the rhythm of real dialogue quite naturally, skipping the foreplay that typically preceded deep discussion: “How was your day?” ”Cold out there, huh?” ”Boy, this job is awful, and so are all the people!” And other such bullshit. “Why are you on this trip?” I asked, with genuine confusion. “Aren’t you transferring soon?” Kate was not part of our shop, and from what I could recall, she would soon leave the command.

“The UAS shop was short-handed, and you know me,” Kate replied. Unmanned aircraft systems.

“You’re a better person than I am,” I said. “Not a chance in hell I would be here if I were you.”

“Yeah, I wouldn’t if it hadn’t been for the need,” she said. “Plus, they asked—and it will likely be my last trip anyway.”

We paused. The conversation had gotten a layer deeper, uncomfortable and raw as I realized why this would be her last trip.

READ MORE
Losing Sense Of Self One Suicide At A Time

Kate was one of the Navy’s few real workhorses. Since I had met her in 2018, she was constantly on the road, trip after trip, maintaining an op tempo that would break most people. It was a selfless act on her part, as she was always too eager to lend a helping hand—a trait the unit was never too shy to take advantage of. But her tenure at the command had come to an end, and not with a bang but a whimper. An alcohol-related incident had determined her fate.

“It wasn’t drinking that caused it,” Kate explained as she described the scene. “I only had two drinks of sake—two drinks. I wasn’t drunk.”

“I was stressed!” she said. “My tempo had been too much for too long, and it just caught up with my body.”

“I tried to explain this at my disciplinary review board, but it was just dismissed.”

“The worst part was to see the hypocrisy of people I drank with now judging me at my disciplinary review board,” Kate said, her brow furrowed as if she had been transported to the moment of impact. 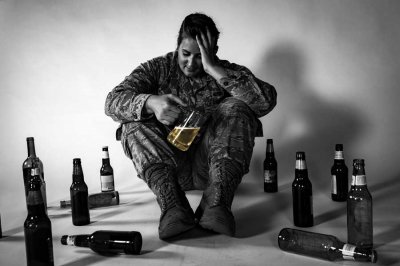 Her board, a form of nonjudicial punishment, was not a panel of junior sailor drinking buddies, but rather the senior enlisted pillars of the command—in other words, those who had profited from her “sleep when I’m dead” pace without a moment’s thought about the possible repercussions.

The military is funny like that: famous for strict rules and regulations that see grown-ass war-fighting adults treated like children, but then giving any go-getter, without a single word of wisdom, all the rope needed to hang themselves. Hell, even military equipment has a plan for preventive care. But as far as people go, hard-charging, fire-and-forget functioning alcoholics who can rage against the dying of the light without ever slowing down to enjoy the scenery will do just fine.

None of this, of course, is news to members of the U.S. military. Outliers exist, but the majority of service members are good ol’ Uncle Sam-loving red-blooded Americans—service-minded patriots willing to push themselves to the max for God and country. But the most common prescription for work-related stress is booze—not a relaxing, antioxidant-filled, single glass of wine at the end of the day, either. In fact, service members drink more than people in any other industry in the United States, and they have a particular affinity for binge drinking, according to a survey of Centers for Disease Control and Prevention data by a Florida substance abuse treatment company. A myriad of reasons play into this, but work-related stress probably tops the list.

I used to be part of that crowd. I served with folks who fancied themselves war-baron privateers, merrily drinking as they hit the high seas for conflict and adventure—no one promised tomorrow, so we lived for today. Along with my beer, I had drunk the Kool-Aid. I was so enchanted by the concept of selfless service that I lost touch with reality and tumbled through the looking glass. I felt overworked and overstressed, and alienated from my loved ones. Too often I had chosen a school, training trip, seminar, or whatever work-related event that came up, without balancing my personal life, leaving me with unhealthy habits, a failed marriage, and a broken identity.

I deployed in 2019. Already burned out from a work-up that had pushed my marriage to the limit, I tried to make those lost hours worth it by burning the candle at both ends. I supplemented my schedule with alcohol to steady my nerves and steel my mind. I would not relent till we won the war. But before victory day came, I flamed out. My body, mind—and apparently my wife—had all had enough.

An era of self-loathing masquerading as self-discovery followed. I simply changed my socks and pushed forward. I refused to learn from the mistakes that brought me to this point. Instead, I continued to indulge so I could hide from the reality of my misery. Instead of taking time off, I buried myself in more work than ever. I volunteered for more trips and another deployment.

My mind mutinied. Once again, I found myself in a faraway land, stressed and alone, but this time I couldn’t rationalize why. The ends no longer justified the means because the means had led to the complete alienation of my son. He refused to talk to me, and at that point I understood: Something had to change or I risked losing him forever.

Every preconceived notion about selfless devotion to work, and to the military, had been removed, revealing the importance of life that had been there all along. Instead of sadness at the time I spent away from my loved ones, I felt heartened by my ability to devote my future to them. 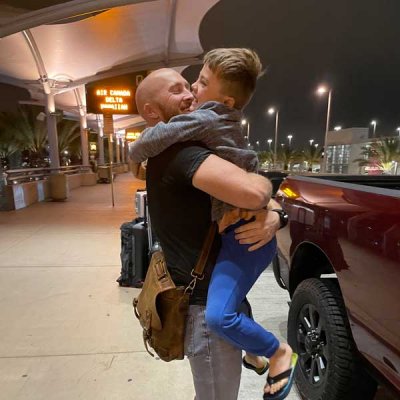 Tom Wyatt hugs his son as he leaves for his last deployment. Photo courtesy of the author.

Even though my mind seemed to reject all previous notions of my personal identity in an abrupt and sudden manner, the follow-on struggle to break old habits came hard. Relinquishing the go-go-go mindset proved more difficult than I expected, as did the associated drinking, which acted as both a coping mechanism and enabler—thus the current sobriety. And I’m glad I was sober for Kate’s story—for the aforementioned physical and mental health reasons, but also, I might otherwise have missed the symmetry in our stories.

In spite of the bitter tone Kate used to revisit the series of events that led her to this point, I could tell that her eternal optimism and drive would ultimately resurface and win the day. She would move on to the next phase of her career, likely with the same vigor and determination that built her reputation and then ultimately drove her into a wall. This time, however, she would be armed with the knowledge that the military is in many ways a user, always willing to take whatever you are willing to give and rarely giving back—and maybe that would slap a governor on her engine before she torqued it to the max again.

So there we were, two recovering work junkies on the road once again like gambling addicts sitting at a roulette table. We tempted fate as we sat there at the bar of the Groundhog Day Inn and we knew it, yet we both felt a difference in the moment. This wasn’t a tumble off the wagon but rather a reminder of where it all went wrong, what had led us both to our inevitable bitch-slap from reality—fortunately losing our rose-colored glasses in the impact, leaving us the ability to see the truth of the matter, if only in hindsight. 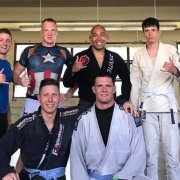 Moral Waivers for War—”I Was Shocked, but We Needed Men.”
I Had Seen What ‘Lock and Load’ Meant to This Drunk and Rowdy Rabble, and...