“Spanish Flu” is a misnomer. It got the name because Spain, which was neutral in the war, was the first country to report on the outbreak because it had no military censorship. Other countries kept a wrap on news of the pandemic for fear of raising concerns while it had troops on the battlefield.

Experts believe the virus actually showed up initially in the American Midwest, in Haskell County, Kansas, an agricultural region. It unleashed the beginnings of what became the first of three waves in March 1918.

Soldiers from Haskell County went to Camp Funston, a part of Fort Riley, to train. Health experts believe they infected others. As troops from the camp were sent to other military installations across the country, the virus went with them, infecting even greater numbers. 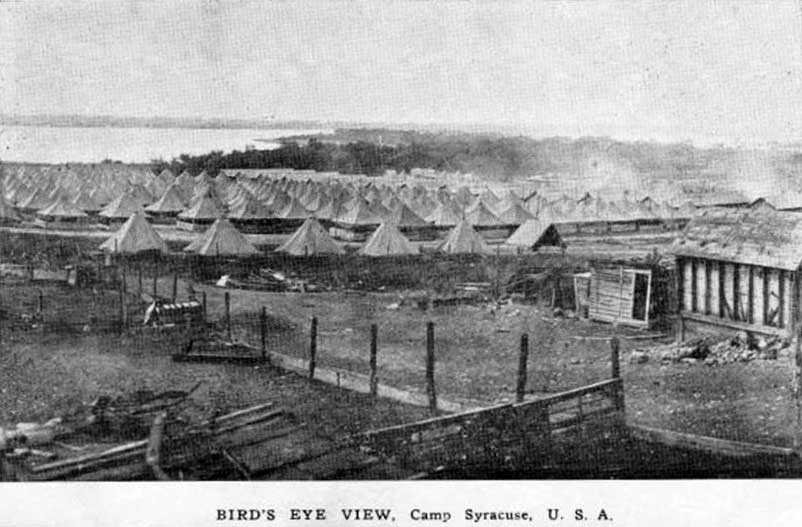 A 1917 photograph of Camp Syracuse, a recruit camp outside Syracuse, New York, shows Onondaga Lake in the background. In 1918, 2,900 of the 12,000 soldiers at Camp Syracuse developed influenza, and 208 died. The virus spread from the camp to Syracuse itself where 900 people died in the fall of 1918. Photo courtesy of New York National Guard.

It was an opportunistic disease. It chose no side in the conflict. As American soldiers were sent overseas, they infected Allied and German troops alike, as well as civilians.

The military had a public health emergency on its hands with few tools to fight it. Unlike now, there was no vaccine to inoculate the troops and the larger public against the virus.

On Aug. 23, the FDA announced that it approved the first COVID-19 vaccine—saying it “meets the high standards for safety, effectiveness, and manufacturing quality the FDA requires of an approved vaccine,” according to acting FDA Commissioner Janet Woodcock—and the military sprang into action.

“Now that the Pfizer vaccine has been approved, the department is prepared to issue guidance requiring all service members to be vaccinated,” Pentagon spokesman John Kirby told reporters Monday. A timeline will be available soon.

With hospitals throughout the country becoming overwhelmed with unvaccinated COVID-19 patients, it was no surprise when the Biden administration this month mandated that every member of the armed forces be given the shots.

“Getting vaccinated against COVID-19 is a key force protection and readiness issue,” Gen. Mark Milley, chairman of the Joint Chiefs of Staff, said in a statement.

In 1918, the military would have done just about anything for a vaccine: During World War I, when the United States and its allies battled both the Germans and the devastating Spanish flu, the flu wreaked deadly havoc.

More than 116,000 American servicemen were killed during the war. But as bloody as the conflict was, with never-before-seen carnage from machine guns, mines, artillery, and poison gas, diseases—largely the Spanish Flu—took the greater toll. The flu was responsible for more than 63,000 deaths, compared to around 53,000 caused by combat.

“They were pretty helpless against influenza,” she tells The War Horse.

America needed a healthy army and navy as the smoke of battle hung over Europe. By the fall of 1918, military physicians ordered troops to wear masks and practice social distancing, just as they do today. They experimented with medicines, though with little success. 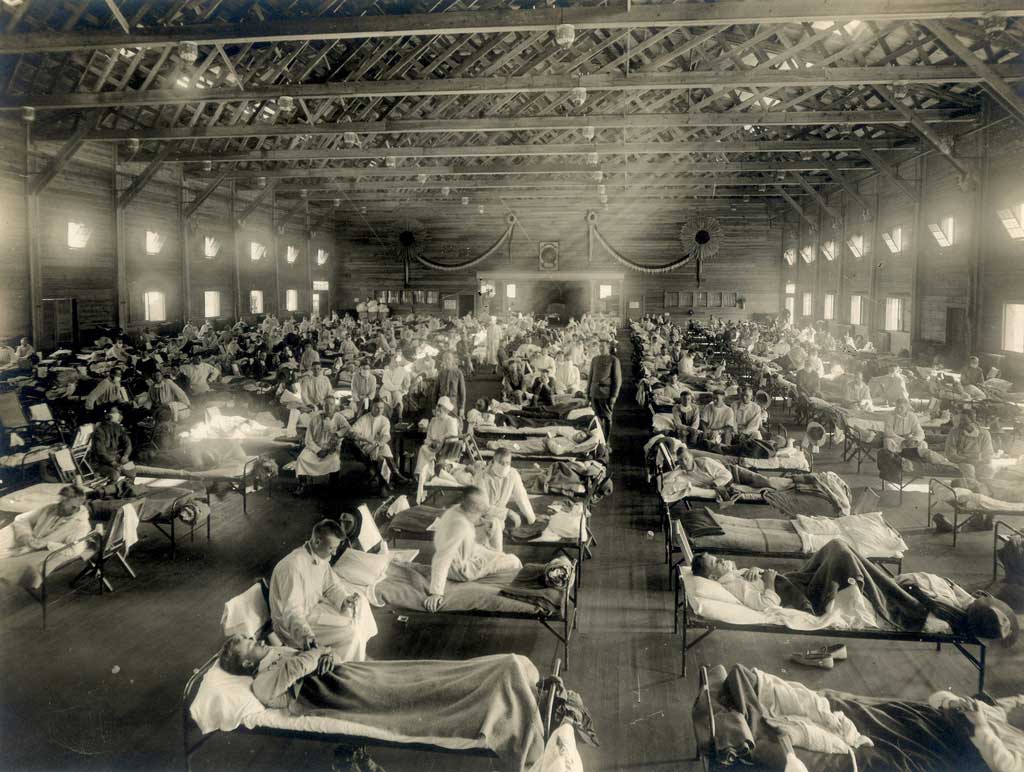 Soldiers at Camp Funston, Kansas, are quarantined while recovering from the Spanish flu in 1918. The flu infected about 500 million people around the world. Photo courtesy National Archives.

But more than two decades after the armistice, as another world war gripped the globe, many of the military’s senior officers who had fought in the first world war remembered how devastating the Spanish Flu had been and how it had undermined America’s efforts.

The U.S. Army set up a commission to develop a flu vaccine. It partnered with academia and industry to produce other disease treatments, as well.

“The military, more than most sectors of society, understands how important it is to keep a population vaccinated because that is how you are ready to fight and defend your country,” Byerly says.

At the outset of the “Great War” in 1914, the world looked very different. National boundaries and alliances were not what they are today, and nationalism was on the rise. Old monarchies teetered. The assassination of Archduke Franz Ferdinand, heir to the Austro-Hungarian Empire, by a Bosnia-Serb nationalist in 1914 became the match that lit the flame.

The United States, which had been on the sidelines, entered the war in 1917 after a series of German attacks on American shipping. A deadly pandemic was not on anyone’s radar.

The world had experienced influenza outbreaks before, but nothing like the virus that spread across the globe in 1918, “one of the most lethal pandemics of the Modern Age,” according to the National Institutes of Health.

One-third of the world’s population was infected, leaving at least 50 million dead, with 675,000 in the United States alone, according to the Centers for Disease Control and Infection. Pneumonia was the primary cause of death. By comparison, the COVID-19 pandemic has killed more than 4.4 million people worldwide, including more than 620,000 Americans, according to the World Health Organization.

Cramped troop ships ferrying soldiers across the Atlantic Ocean to Europe to fight Germany and its allies became breeding grounds for infection. The battlefield trenches, where conditions were anything but sanitary, became hotbeds of disease. Cholera, dysentery, and typhoid fever were common. Poor nutrition was rampant.

Field hospitals up and down the Western Front became overwhelmed.

In the fall of 1918, as the flu virus mounted its deadly second wave, the Army’s acting surgeon general, Brig. Gen. Charles Richard, pressed Army Chief of Staff General Peyton March to impose a quarantine on troops before they boarded ships bound for Europe and to reduce the crowding in hopes of checking the spread of infection. But March also felt pressure from Gen. John J. Pershing, commander of the American Expeditionary Force, who wanted more men. 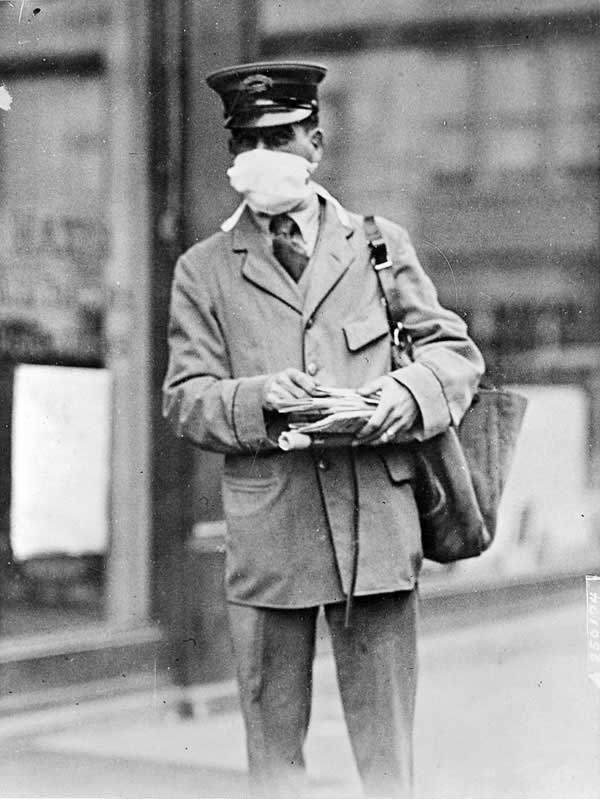 A New York City mailman goes about his business while wearing a gauze mask designed to stop infection during the fall of 1918. U.S. Army units mobilizing for World War I were struck hard by the virus, which often hit military bases first and then spread to civilians. Camp Upton on Long Island was closed to visitors in the fall of 1918 to prevent the spread of the flu. Photo courtesy New York National Guard.

In a conversation with President Woodrow Wilson, March argued against a slowdown and Wilson agreed. The soldier who died from the virus, March said, “has just as surely played his part as his comrade who has died in France.”

Wilson himself later contracted the Spanish Flu while in Paris for peace negotiations in 1919. Accounts at the time said the president was not the same after his illness. Months later he suffered a mini stroke.

Physicians identified the bacteria causing many of the deaths. But without antibiotics, which were not fully developed until the 1930s, they “could do little more than provide palliative care of warmth, rest, and a gentle diet, and hope that their patients did not develop pneumonia,” Byerly wrote in a report for NIH.

Military physicians experimented with several therapies to treat the bacteria. The U.S. Army Medical School produced and distributed two million doses of an experimental drug in October and November of 1918, according to a 2015 article in Armed Forces & Society, which publishes peer-reviewed academic research.

“The military environment was seen as an optimal setting in which to test the viability of an influenza vaccine, given the large number of test subjects (the enlisted), the controlled environment, large case numbers, and sophisticated reporting regimes,” wrote the authors, Christopher Watterson and Adam Kamradt-Scott.

But because vaccines were still more an idea than a reality and the cause of the flu remained unknown, “no conclusive results … could be attained. The net result from the failed trials meant that medical personnel often found themselves powerless to prevent the spread and lethality of the disease.” 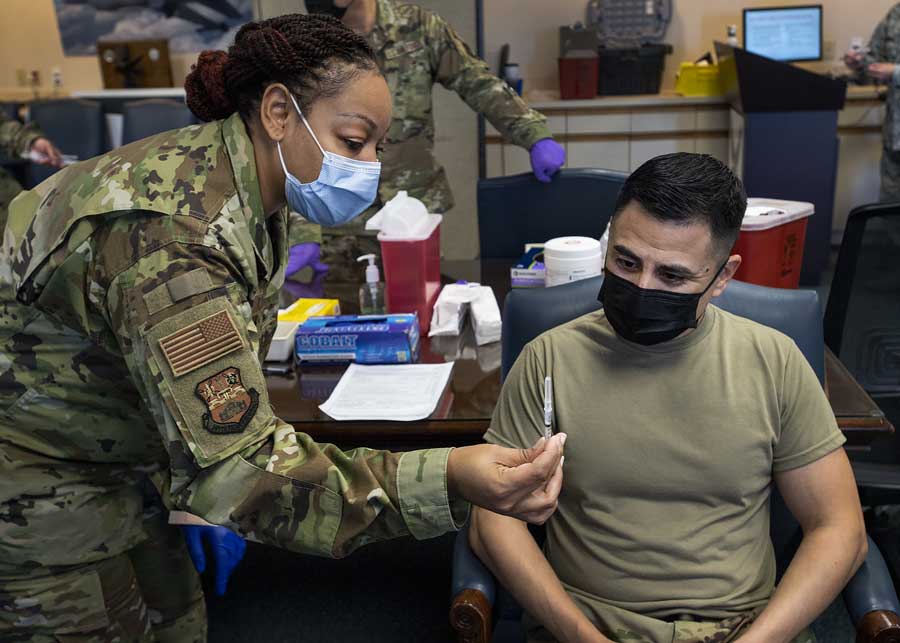 At Camp McClellan in Alabama, since renamed Fort McClellan, “Military authorities also attempted to prevent the spread of infection by keeping buildings clean, airing out tents and bedding daily, exposing troops to fresh air, and keeping recovering patients isolated for an additional ten days,” wrote Kathleen M. Fargey, a historian with the U.S. Army Center of Military History, in the spring 2019 issue of Army History. “Units which seemed prone to illness were sprayed with chemical agents in an attempt at decontamination.”

But the rapid, unrelenting spread of the contagion became almost overwhelming.

Dr. Victor Vaughn, dean of the University of Michigan School of Medicine at the time, was no stranger to the debilitating effect of disease, having seen how typhoid fever laid soldiers low during the Spanish-American War.

As head of the communicable diseases section of the surgeon general’s office, he visited Camp Devens near Boston during the virus’s second wave in the fall of 1918.

“I see hundreds of young, stalwart men in the uniform of their country coming into the wards of the hospital in groups of ten or more,” he wrote afterward. “They are placed on the cots until every bed is full and yet others crowd in. The faces soon bore a bluish cast; a distressing cough brings up the blood-stained sputum. In the morning the dead bodies are stacked about the morgue like cordwood.” 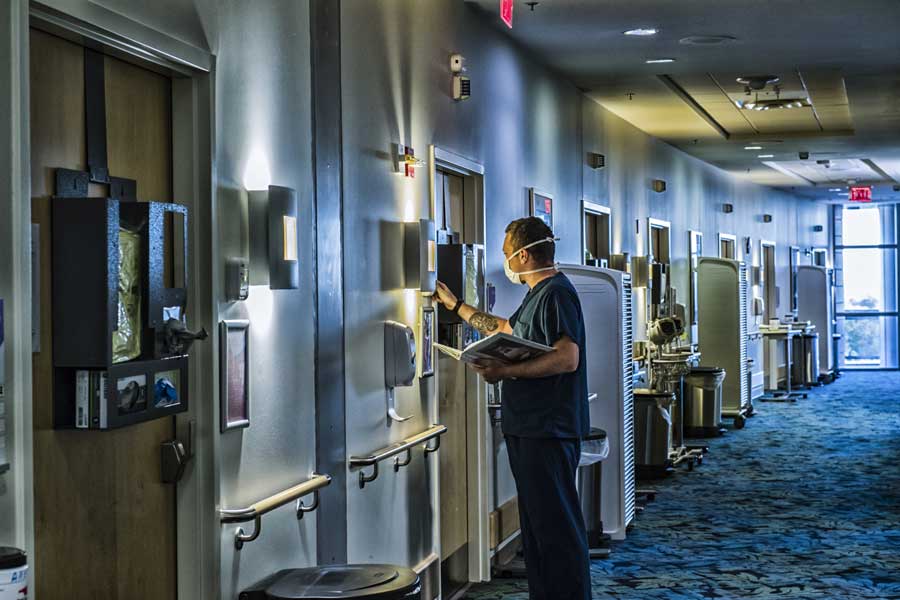 Team members of the Belvoir Hospital’s 7 Medical/Telemetry Unit prepare for the start of a new day in April 2020. The unit converted many of its daily operations to care for patients admitted for COVID-19 infections. Photo by Reese Brown, courtesy of the Defense Department.

A hospital report around that same time from Camp Meade, near Baltimore, noted the virus’s stunning infection rate.

Though the military didn’t have the tools that modern medicine has used to thwart the current pandemic, it understood that whether now or a century ago, a strong public health system with clear lines of leadership was crucial to the response.

“That’s what the Army has been able to have,” Byerly says. “To see people say public health needs to be handled at the local level, that’s not the way the virus sees it. The Army understands that these germs are enemies and vaccines are strategic weapons against enemies.”

Editor’s Note: This story was edited to clarify that most deaths after contracting the viral 1918 flu were attributed to a secondary bacterial pneumonia infection that would have been aided by antibiotics, which were not fully developed until the 1930s.

This War Horse feature was reported by David Goldstein, edited by Kelly Kennedy, fact-checked by Ben Kalin, and copy-edited by Mitchell Hansen-Dewar. 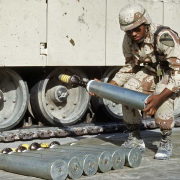 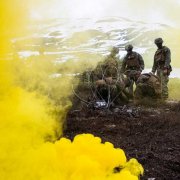 “Lost Trust and Confidence” — How the Military Covers Up Officer Misconduct and Why That’s Harmful to Democracy
From Deployment to Homecoming. And a Pregnancy During Lockdown.

“What Had We Done to Jeffery?”–Marine Relives Role in Hazing
Scroll to top