I spent 18 months in training before reporting to my first submarine. I learned a lot about damage control, sonar, electronics, and how to distinguish a sperm whale from a humpback whale. But nothing prepared me for the disconnection from Earth that distorted my perception of time while submerged.

I slipped the surly bonds one cold, clear early Sunday morning, disappearing down the missile compartment hatch for my first submarine patrol. “Say goodbye to the sun,” I heard someone say as we silently headed north through the Puget Sound. “You will see it again in 83 days.” 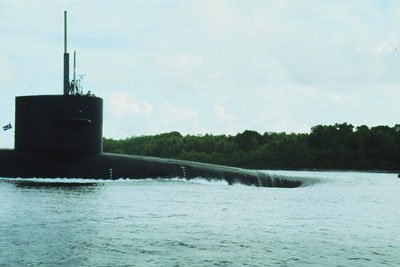 David Chetlain took this photo of the USS Nevada entering Kwajalein Atoll in the U.S. Marshall Islands in July 1990. Photo courtesy of the author.

I registered the time—eight a.m. Four hours until my first watch. Or so I thought. Beneath the Earth’s surface, we were on Zulu time. It was eight a.m. … now it’s six p.m.? Just like that? Welcome to the Time Machine, young man, where time is just a number in your logbook.

I trudged upstairs to assume my first sonar watch, and by the time I was relieved five and a half hours later, I was starving. I could hardly wait to try the great submarine food I’d heard about. But this was “midrats” where they served leftovers or cold cuts or, in the absence of those, opened a can of ravioli. I choked something down, performed cleanup duties, and looked at the time. Past midnight now. Except my body said it was 2:30 in the afternoon. Now what?

As a new arrival to the submarine, I was a “non-useful body,” or NUB, a worthless oxygen thief until I qualified in submarines. I’d have to dedicate every waking moment to the pursuit of “earning my dolphins.” I grabbed some study materials, and pretty soon it was time for breakfast. I wasn’t not hungry—tired maybe—and considered going to bed. But I had training, followed by lunch, followed by another watch.

Is it noon? I wondered. How long have I been up? Thirty-six hours? Twenty? I can’t be sure. My body told me it was time for bed, but now I was in a blue room, sitting in the dark and listening to killer whales through headphones, desperately trying to stay awake. My head bobbed and my supervisor yelled at me; I snapped upright. But sleep overtook me again—until I felt a smack on the back of my head.

My adrenaline spiked; I stared harder at the screen, listening closer to the white noise. When sleep overwhelmed me for a third time, my supervisor tried a different tactic—he handed me a cup of coffee. “Drink up, NUB.” 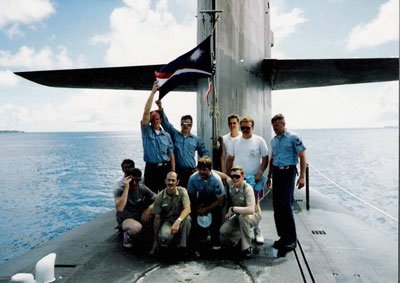 Members of the sonar division, including David Chetlain, kneeling in pink Chuck Taylor All Star Converse shoes. Photo courtesy of the author.

I lost count of how many cups I drank, but it got me through the watch. And I had discovered the sailor’s elixir of life. After watch came dinner—pork adobo on the mess decks. But all I wanted to do was sleep. I stumbled to bunk room four, rack four, and climbed into bed. Some time later, I woke up in the dark; it was eerily silent. I tried to sit upright and banged my head.

Ouch. Oh yeah. I’m sleeping in a coffin now. Can’t do that.

I looked at my watch: two a.m. I had slept for seven hours, and I was hungry. I rolled out of the bunk, put on my shower shoes, and started walking toward the head.

“Hey NUB. What the hell do you think you’re doing?” I heard.

“Just going to take a shower.”

“Wrong! We’re in ultra-quiet. Everyone not on watch belongs in bed.”

I scurried back to my bunkroom, climbed in my rack, and stared at the ceiling—10 inches above my eyeballs. Time is a rare luxury on a submarine, and now I had too much of it. Morning eventually came, with fresh milk and eggs, a luxury we couldn’t expect for much longer. “Enjoy it while it lasts,” I heard someone say.

Back at the sonar shack, I resumed watch, this time refreshed and ready. Time flew now as I busily monitored vessel traffic and the normal background patter of the submarine resumed. After watch, lunch, and post-watch cleanup, I would finally have the chance to shower for the first time since boarding the submarine.

Wrong again. I spent the next eight hours running unscheduled casualty drills: fire, flood, toxic gas, missile emergency, one after the other, with a break for dinner. When we wrapped up at 9 p.m., I had only three hours to go until my next watch. My head swam. If I couldn’t sleep, I could watch a movie at least, I thought as I walked into the crew lounge.

“No movies for NUBs. Get out.”

At midnight, I headed back to the sonar shack—my fourth watch. Coffee got me through, but maybe, just maybe, I was adjusting to the rhythm of submarine life! At the end of the watch, though, I’d lost track of time again. I stumbled down the mess decks—breakfast. So it’s morning. … But what day is it? I looked at the plan of the day. A Wednesday. I’d been up again for more than 24 hours, and all I wanted to do was go to bed. 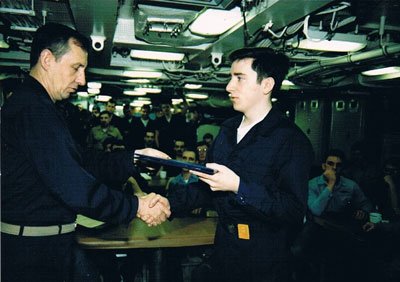 David Chetlain receives his “dolphins” from Capt. Larry Kraemer on the USS Georgia about halfway through his first patrol. Photo courtesy of the author.

It would have to wait for at least six more hours while we exercised our tactical systems. I choked down some eggs and headed back up to sonar control to take over my assigned role in the torpedo firing team. I’d just left, but now 12 people packed the room, squeezed in next to each other. I leaned against a bulkhead to try to stay upright and focus on my job. The exercise dragged on for another three hours after lunch until the captain was satisfied, and finally, I crawled into bed with less than two hours to go before my next watch. I made it through, having slept for just 90 minutes in more than 48 hours. When I finally got off watch at midnight, I jumped into the rack for a few hours of sleep.

What the fuck? Are you kidding me? I thought as I got dressed and stumbled back up to sonar for a readiness test sent out from the squadron. For the next 12 hours, we went to battlestations missile multiple times until every rocket had simulated a launch and virtual Armageddon was complete.

Afterward, I returned to watch, delirious and staggering like a drunk. My blood coursed with coffee and I felt like death. I’d lost track of time again. Finally, I rested; the plan of the day told me it was Friday. I’d been on the submarine for six days yet it felt like a month. I took my first shower, and felt human again; there was time to catch up on my qualifications before the next watch. Maybe I’m getting the hang of this.

At lunch we ate hamburgers, but the bread we’d brought on board was gone. So was the milk. Instead, we had buns made by the night baker and “plastic cow”—dehydrated milk that none of us would touch. There was no lettuce; you didn’t want to touch those tomatoes. The french fries were questionable. But I was hungry and had no other options. There were no crazy maneuvers or death-defying drills, at least.

At mid-watch, the boat was quiet, the ocean silent. My mind told me it was the middle of the night. Then I was offered a look through the periscope—sun, water, ocean spray. Broad daylight. No land, no birds, no ships. Nothing. I stepped back, shaken. I finished my watch in a daze. I’d had one hour of sleep in the past 26; I’d entered an alternate dimension. I needed to go to bed. But it would have to wait. Again. Saturday was Field Day. 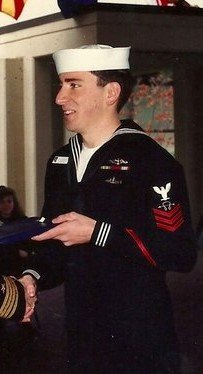 David Chetlain receives an award from the commanding officer of the USS Nevada. Photo courtesy of the author.

For a moment, I felt confused—how do you have field day on a submarine? Turns out it was a nice name for spending the next four hours cleaning an already pretty clean vessel. Afterward, I worked on my qualifications for another two hours and then slept. It didn’t last long: a messenger roused me awake to prepare for the last watch of the week. As if days or weeks have any meaning anymore.

Saturday night, someone congratulated me over pizza for making it through the first week, and it felt good, until he added: “Only 11 weeks left!”

Thanks for ruining the mood. … jerk.

But I would make it through my first deterrent patrol—and seven more plus many sea trials during five and a half years of submarine duty, leaving from ports all over the world. The details of that first departure remain the clearest of them all. That is when I learned to sleep whenever I could, to relish seven- and eight-hour stretches—the great equalizers, we called them.

Thirty years after my last patrol, I can still sleep on command, and I tend to wake up every two hours or so, as if I’m expecting to be dragged out of bed after all this time. I relish things I once took for granted. Apples, a ripe avocado, a good salad, the sun, and the moon.

I’m grateful for the cadence and clarity of life above water.

‘Faster Than Starlight’—How Troops Track Santa’s Trek Across the Gl...
Scroll to top