I was visiting my 98-year-old mother in the middle of November in 2017, which, by chance, was the 60th anniversary of my father’s death.  As she channel-surfed among her favorite programs, we somehow landed on Operation Overlord as depicted in The Longest Day. I have probably seen the movie half a dozen times—I taught a high school class on The Images of War—but the opening scenes remain engrossing.

As we watched for a few minutes my mother off-handedly mentioned that my father was at Omaha Beach. I sat up and took notice at this piece of family lore that I had never heard before. This was not so unusual as much of our family history before and after my father’s death in 1957 was never talked about. It was like any discussion of the past would bring up painful memories that were better left buried. After the deaths of my father and a short time later my grandfather, the family, what there was of it, resumed the routines of school and work. There was no time for questions, or for grief.

Not pressing my mother for any more details, I decided to find out what my father Lyman Abbott’s World War II service was, if in fact he was at Normandy. He certainly never talked about it, but what would he have said to his only child, who wasn’t born until after the war? The sole visual evidence I have of his Army years are two small undated professional photographs. 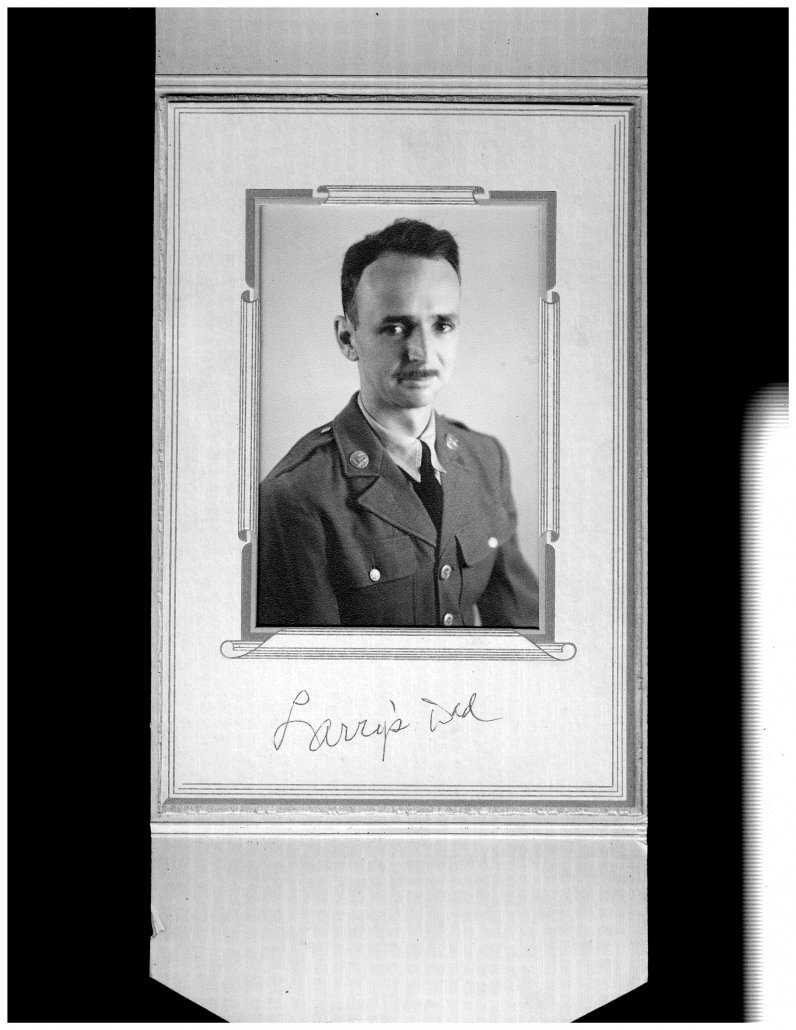 The photos are permanently mounted on shiny wooden Pyraglass frames, with a label on the back from Newburgh, New York, near our hometown of Cornwall. They were taken post-war, as one of them shows corporal’s stripes, although some documents indicate he left the Army as a private first class. In one photo, my father is in uniform, in a black tie, with corporal stripes on the upper left sleeve of his jacket. He has two pins on his collar, also noted on his Honorable Discharge documents: a button embossed “U.S.” while the other pin shows crossed cannons. His cap is at a rakish angle. In the other, he is without a cap. He has a modest mustache and the jaunty smile of a man happy to have done his duty and made it through alive. He looks vaguely British.

I don’t have too many memories of my father, having been just over 8 years old when he died. The small scar on my chin is evidence of those halcyon days before car safety features. I was perched on the edge of the back seat of what must have been our circa 1955 Ford station wagon with my arms crossed and leaning on the top of the front passenger seat. No headrests back then. Dad stopped short to avoid hitting a dog crossing our path and I sailed over the front seat onto the metal dashboard. I’m not sure if the dent detracted from trade-in value.

When my father tried to teach me archery I was, most likely, a deliberately inept student, and I received a few half-hearted swats with a handful of arrows. This is the only time he showed any anger or short temper. I am not sure if this ill treatment made me quiver, but that was the end of archery lessons with him, although I did continue on my own. I never hit anything but lost considerable arrows in the trees around the property.

I learned my father was the first person drafted from our hometown. This was in November of 1940. He was born on July 6, 1907, so at 33 years and four months off he went. I’m not sure of all of his activities after high school, but he completed a one-year air conditioning and refrigeration course at New York Institute. I never heard that he followed that career path. I did learn that for six years, from 1934 to 1940, he worked as a clerk at the New York Life Insurance Company in Buffalo, for the sum of $25 a week.  This position might have been nepotistic as his father wrote a history of the company, The Story of NYLIC, which was published in 1930. I have Dad’s copy of the book, which is inscribed to him “with the high hopes of his father.”  Dad was 23. 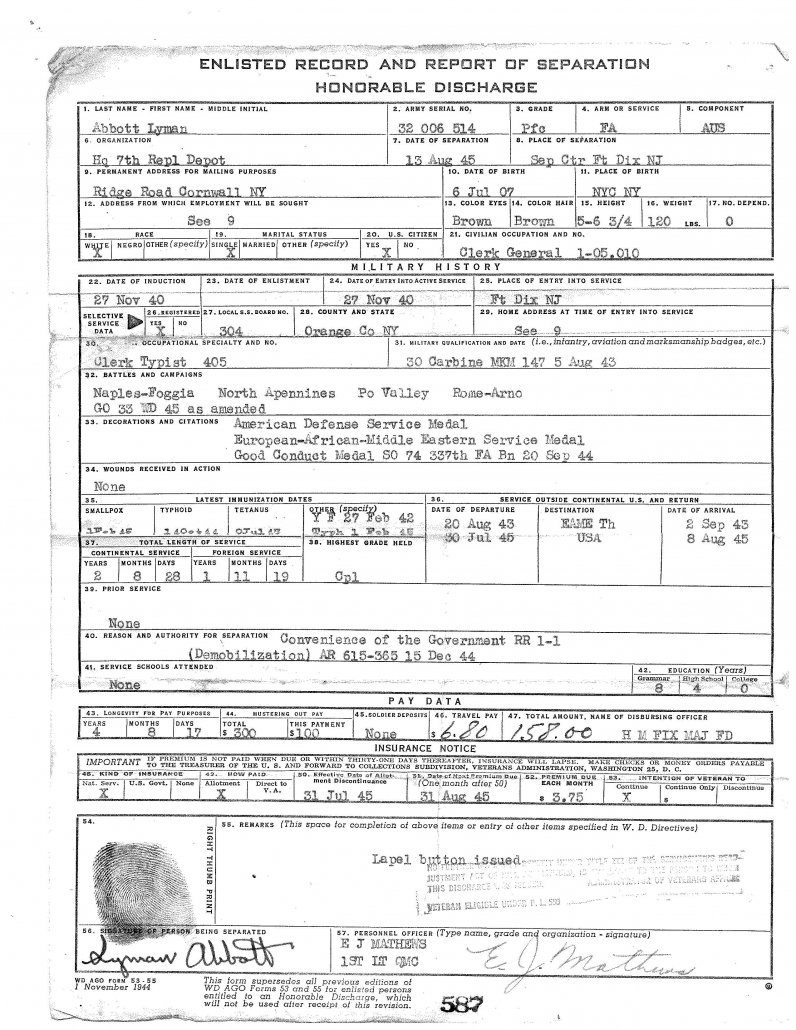 He was inducted on November 27, 1940, at Fort Dix, with an eventual military occupational specialty of clerk-typist. His physical exam was very thorough. He had no facial abnormalities, but showed a scar in his pubic area from a 1915 operation for a stone in his bladder. His feet were not disqualifying. Apparently, he had scarlet fever in 1920, and “G.C. 1937—cured,” whatever that may be. His eyesight was 20/20 and his blood pressure was 125/80.

As a private he spent one month in Basic Field Artillery training and later was qualified in “30 Carbine MKM 147.” Did he ever use this training as a clerk-typist? He was posted to Naples-Foggia, the North Apennines, the Po Valley, and Rome-Arno, assigned to Headquarters 7th Replacement Depot. He “performed numerous clerical and typing duties in a military organization. Used typewriter to prepare stencils, correspondence, endorsements, reports, and standard forms pertaining to military administrative and personnel matters. Distributed, classified, and filed correspondence,” according to the separation classification officer, Major W.W. Von Schlichten. Perhaps he did see some action, as he received an American Defense Service Medal, a European-African-Middle Eastern Service Medal, and a Good Conduct Medal.  Another document shows two Bronze Battle Stars, one for the North Apennines and one for the Po Valley. His “Final Indorsement” notes that his “character” and “efficiency rating as soldier” were both “excellent.”

I would not say my father was aloof, but photos of family gatherings show him sitting apart from the group. His Army records at induction indicate that he was 5 feet, 6 and three-quarters inches and weighed 117 pounds, with brown hair and brown eyes. The rations must not have been good to him because at discharge after four years, eight months, and 17 days in service he was just 120 pounds.

We had moved from Oak Street to a house on Ridge Road, a few miles out of town, across from Storm King Golf Club, which my paternal grandfather, Lawrence Fraser Abbott, co-founded in the 1890s.

I do remember that my father had a number of jobs when I was growing up. He was a sales clerk at Sutherland and Lorch, a local sporting goods store—where I got my first real gun, a Stevens 311A double-barreled shotgun, 20 gauge—then owned a hobby shop on William Street in Newburgh. I went to a preschool a few doors down from his shop, and when I had impetigo he came at lunch to apply an ointment. Apparently, the shop went under, as the last job before his death was a cashier for Coca-Cola.

Dad was a slight man, but I don’t remember him being ill in his eight years of my life. Photos from my parents’ wedding on June 8, 1947, show him in a white suit with matching shoes, walking arm-in-arm with my mother down the aisle of the packed St. John’s Episcopal Church in Cornwall. She was not a large woman but was clearly a shade taller and wider.

A few days after dad passed my mother wrote to the Albany VA hospital to get further information on the cause of death.  There was no response for over two years, when she finally received a letter from Bernard Hunt, the hospital registrar. He apologized for the delay, noting that the post-mortem notes were requested on November 15, 1957, but “our request had not been recorded.” Be that as it may, the pathologist provided a fairly lengthy summary, stating that dad suffered from “idiopathic steatorrhea. . . . the cause of this digestive disturbance cannot be determined.  . . . A volvulus, that is, intestinal obstruction . . . developed and was surgically corrected.” However, post-operatively, Dad developed bacterial infections that spread to the lungs and bloodstream. The bacteria, in turn, created abscesses in numerous organs. “This infection of the blood stream was directly responsible for the death of Mr. Abbott.” And with that, he was gone. I never had the chance then to really say hello, or goodbye.

My father was not at Omaha Beach. His military experience is not depicted in a famous movie or photograph. He never ascended the ranks to be a leader of men. He came home safely, like hundreds of thousands of others, and at age 37 tried to remake, or make, a life. This life was cut short at 50 years old, but at least I know him now and am glad that I finally was able to say hello. 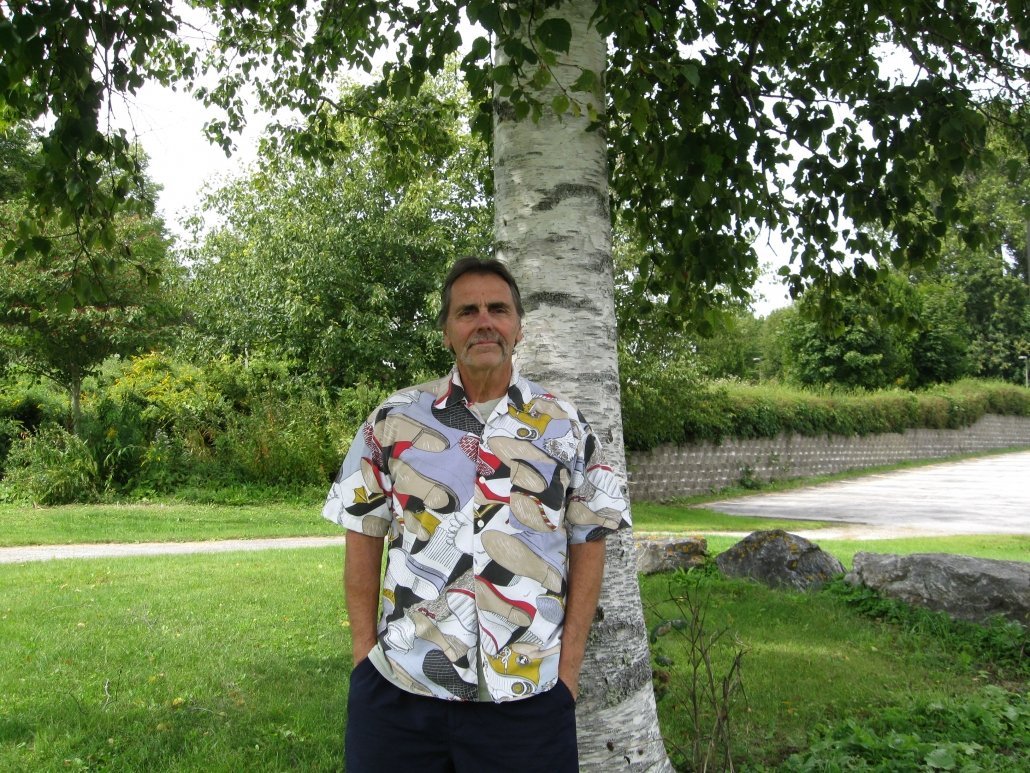