A man in white appears. Above me I hear, shoot, shoot, shoot. I don’t; it’s my first time with a target in my sights. I wait too long. He’s gone. If he pops up again, take him.

For four years, I’ve waited for this moment, to see a man in my sights. Four hundred meters. My rifle. His chest. Any second. Dope is set. My eyes scan the highly magnified, eerily narrow world of my scope. I’m stable. Heels down. Breath slow. Four hundred meters separates me from my awakening. Whatever I was running from when I joined the Marine Corps, whomever I could have become—should have become—would die when I squeezed, ever so gently, the two and a half pounds of slack from my trigger. The self-doubter. The observer. The academic. I see my new self. Confident. Righteous. This is what I want. The culmination of everything it means to be an infantrymen. To Kill. Four hundred meters. I wait. 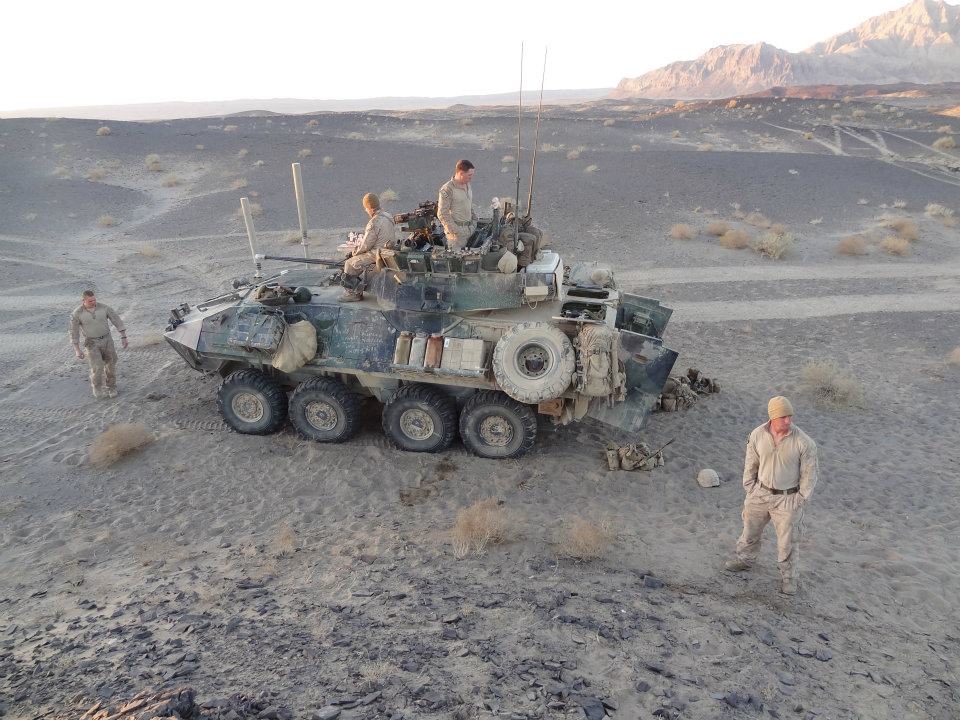 Peter Lucier spent a portion of his deployment patrolling near the border of Pakistan. Courtesy of Peter Lucier.

It changes nothing if I killed him, or anyone in the weeks and months to come. That’s what I’ve learned. Five years, five countries, friends I’ve made and lost. A marriage, then divorce. IEDs hit and IEDs found and blown in place. Gunshot wounds, blown-off limbs, dead bodies on both sides. I wandered in the desert, waiting for a Messiah, validation that I had chosen the right path to some kind of enlightenment. I craved to be sanctified into the brotherhood, or to have a greater connection to life—to be saved even. I don’t know when I stopped believing it would happen. The Marine Corps had taught me a violence and sense of belonging I love, but I’m no longer a true believer that it will deliver me. Afghanistan, like the Pacific, seems to have no memory, and it was there that I lost the faith. 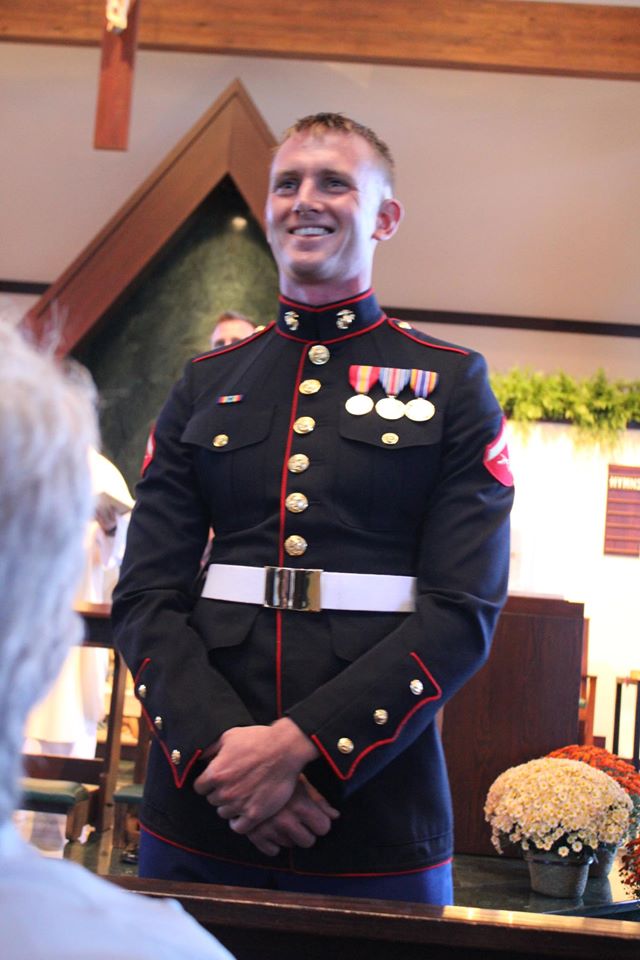 Peter Lucier attends a wedding before deploying in 2011. Courtesy of Peter Lucier.

In Bahrain, they say God can’t see past the bridge, the King Fahd Causeway that connects the island nation to the Kingdom of Saudi Arabia. The god to whom I prayed couldn’t see past the mountains at the Pakistan border. God can’t see the children, too skinny and young, who pour from the madrasas in Pakistan every spring for the fighting season. They flow into the fertile valleys of the Helmand River, coming to plant bombs and to plant dreams. They shoot Russian rifles and rockets. And inevitably they fall, like leaves in the autumn. But winter isn’t long, and mad with dreams that mad men have planted in their heads, the children keep coming.

I was born in a city that sits where the great rivers of America, the Missouri and the Mississippi, meet. From school I rode the number 57 Manchester city bus, from Kings Highway in St. Louis, all the way out to Lindbergh, in the suburbs where I lived. North is rich flat farmland and floodplains, south are the rolling hills of the Ozarks. On that bus every morning, and again every afternoon, I would read great American authors: Faulkner, Hemingway, Kerouac, Ginsberg, and Whitman. They each professed an enduring love and romanticism for the American landscape and the people who lived in it, a very different kind of patriotism than I was seeing in those post-9/11 years, a patriotism not tied to flag T-shirts and Budweiser, but a passion and reverence for the holiness of this place, the mountains and rivers, cities, and deserts. I wondered if my place in this landscape was set, or if something might break me free. 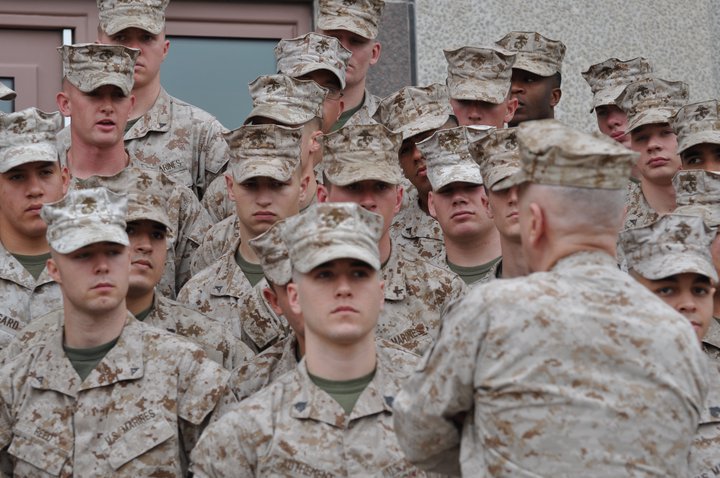 Peter Lucier asks Marine General James Mattis a question outside of the American embassy in Bahrain during a 2010 deployment. Courtesy of Peter Lucier.

My brother was serving in the Marines, and I fancied him like William S. Burroughs in Tangiers, a holy and mythical figure off in another land. Then I met a girl. She had an infant by another man. I started to dream about joining the military to provide for her and our bambina. The girl represented the pinnacle of my adolescent hopes—for sex, family, a sense of belonging—and I believed that in that relationship I would find purpose and a closeness to life. My military dreams went underground, but only briefly. When I graduated from my posh all-boys prep high school, against my brother’s advice, I, ever the zealot, joined the infantry. Quickly my childish dreams were replaced by a very real brotherhood and camaraderie with my fellow countrymen.

Inside me grew a fervent hope, born was a prayer, that through the brotherhood would save me from the mundane. It would be a chance to do something different, radical even. I might be reborn or baptized, but really I cared that it was a middle finger to everything and everyone I’d known, proof that I could and would defy categorization. 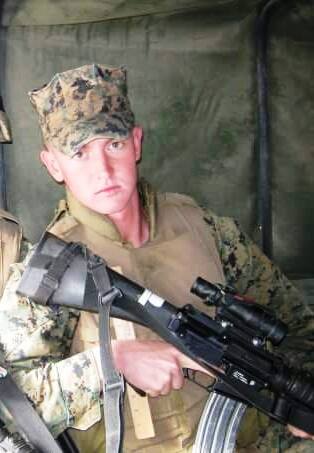 The Marine Corps taught me that despair and violence was renewing. In boot camp I shouted “kill” 100 times a day, and went to two church services back-to-back on Sundays. I prayed to kill. It would mark me, and yes, I believed, it would save me.

My gunny would tell us to take care of our bodies and pray for war, echoing my own boot camp petitions. But we were already in a war—two of them. And my prayers were prayers that I would be sent to combat and to face the decision to shoot or to pause. I prayed that when the time did come God would give me strength to pull the trigger.

The men I was going to kill were beaters of women, corrupt rulers, oppressors, villains, insurgents, terrorists. Wrath and self-righteousness filled me, and I felt violent and noble. And in love. With America, the Marine Corps, the young, golden, perfect men who shot and moved and trained with me every day. 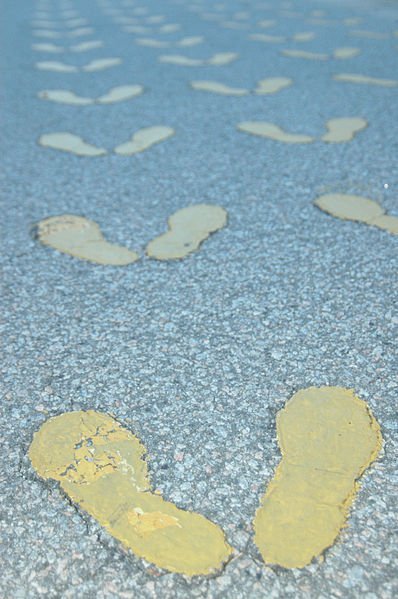 Yellow footprints are the first steps on the journey to becoming a Marine.

And all this because I loved my country in a very particular kind of way. I loved Kerouac whizzing across Iowa, across Colorado, en route to Los Angeles, or San Francisco, or back to The Village in New York City. I loved Ginsberg’s angel-headed hipsters, and the American search for the ancient heavenly connection to the starry dynamo in the machinery of night, the same night under which rolled the dark fields of Fitzgerald and Gatsby’s republic. Denver and holy Santa Fe were the Mecca and Medina of my Hajj to the American west. I dreamed dreams of my holy America. Dreams that when I was home I could never realize.

Hungry to dream again, I had gone on a journey to see and be born again. And see I did. Parts of me lived larger, while others wept and died. And though my blindness fell away, I realized no great truths. I came back home, and they asked if I’d killed. But all I have are questions like those I had the day the man in white appeared: Should I pull the trigger? 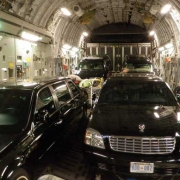 Baseball Games in Tokyo and a White House Tour—“I Bet It Never Smells Like Fart in There”
Years Later, Loss at War Resonates at Home

The Man with Half a Head
Scroll to top