Before 9/11, the U.S. had an awful, aimless decade. Our common enemy, the thing that united us beyond personal profit, was gone. There was no existential threat, no evil empire to defeat. We’d lost the thing that had defined us for decades, our reason for living.

And then we got our purpose back. In the days-long moment that followed 9/11, we discovered that the following things concerned us personally: (1) an actual global conspiracy of religious fanatics led by a wealthy adversary was plotting to destroy America and the West, (2) this adversary had formerly been an ally, making it a doubly dastardly betrayal, (3) somehow, it seemed, Saddam Hussein was involved—Christ, The New York Times said so. 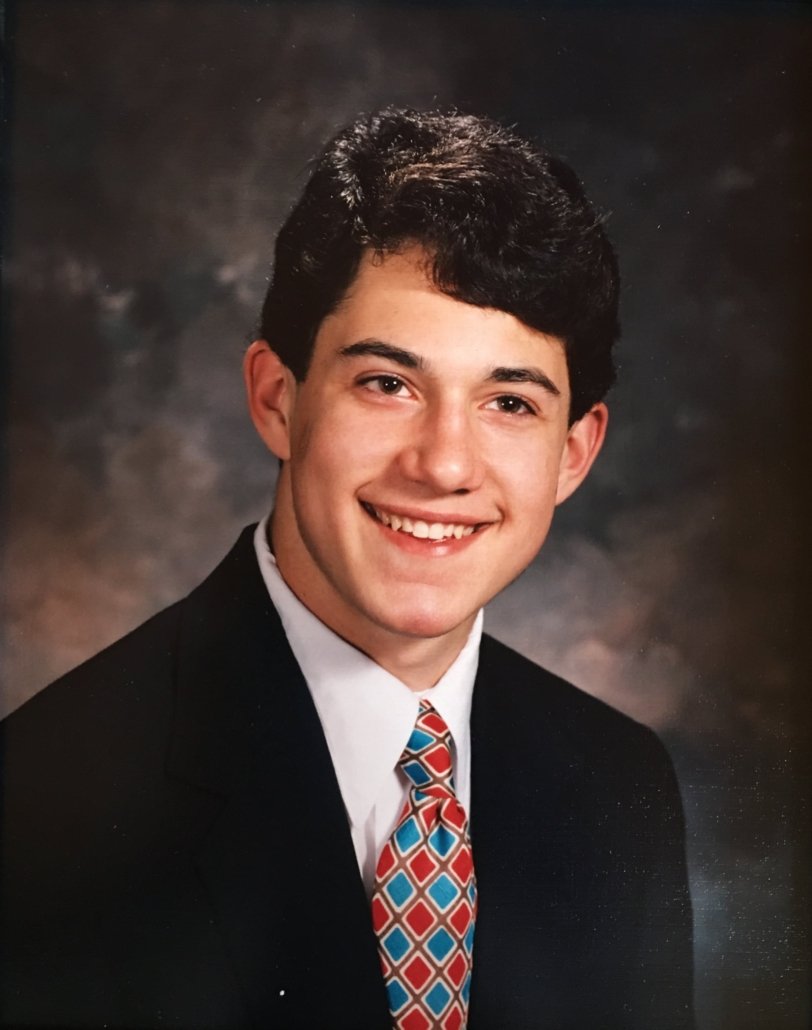 So yeah, I remember 9/11 like it was yesterday. The panicked announcement on broadcast television. The hurried crowding around a television already blocked with worried viewers. The little dots—people!—falling through air. The towers joining the people in mad descent. I remember the frantic search for culprits. The discovery: bin Laden did it. Afghanistan and the Taliban did it, because they gave bin Laden sanctuary and wouldn’t turn him over to the U.S. after we figured out his villainous scheme. I remember that moment, because like most of us, I’d been waiting for it.

America in the 1990s was a pretty lame place. Sometimes we forget this, in our haste to mourn the tragic boredom that 9/11 rescued us from. And as everyone knows from movies and television series, no place in America was or is lamer than suburban Connecticut, home of boat shoes, white people prep schools, and silly names like Bruck Thorstminer III, or Chazdar Haistley. America was lame and rich in the 90s, and Connecticut was super lame and super rich, and that’s where I grew up.

Childhood in the 1980s was not lame. On the contrary, it was an awesome Iron Maiden soundtrack of meaningful conflict and urgent anxiety, thinly buried in every cultural event. Cartoons were astonishingly violent, and characterized by military struggle between a weak but intrepid good and a relentless, overpowered evil. Transformers, Robotech, and GI Joe were a few of the more conspicuous examples of this type of violence-is-justified-to-defeat-evil cartoon, and the comic book versions of these stories were even more so. Console and PC video games experienced a renaissance in the mid- to late-1980s, expanding the way we, as children, related to narrative and plot, granting us godlike power over how a given story unfolded. A synergy developed between playing “war” in real life, video gaming, and the consumption of explicitly aggressive entertainment and mass media. The sum total of this cultural algebra was this: I and my friends expected that one day we’d get a chance to star in a real-world spinoff of “Red Dawn.” War felt inevitable during my childhood, as though it were only a matter of time.

Then, between 1989 and 1991, that irredeemably violent world fell apart. The Russians had bankrupted the USSR on a massive, unsustainable industrial Ponzi scheme, and every Russian national ally that could bailed out, faster than anyone expected. The West had the infrastructure to defend itself against the USSR and ensure mutual nuclear destruction, but there was no way to accept the wholesale defection of entire peoples. We couldn’t just make Eastern Europe our ally, or even Russia, which, at that time, seemed to want to participate in European style democracy. It was all there for the making—a world without serious antagonism between first world powers. 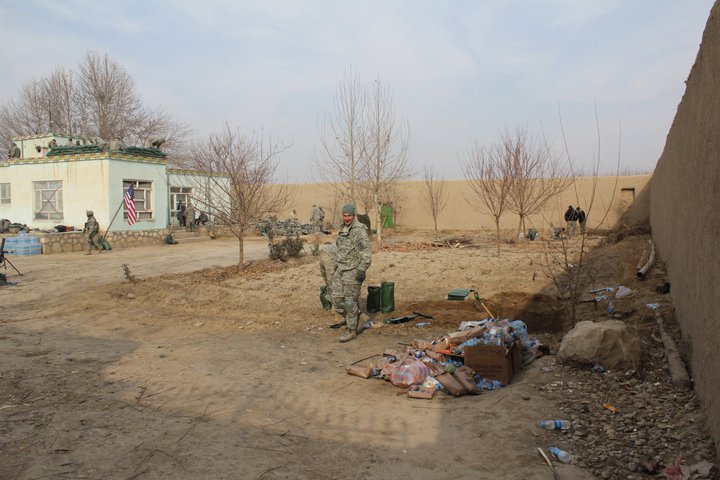 Adrian was an Army infantry officer who deployed twice to Afghanistan, once with the 173rd Airborne, and once with the 10th Mountain Division. Courtesy of Adrian Bonenberger

As if to test this hypothesis, Iraq invaded Kuwait in 1991, eager to flex its muscles in this new world. The U.S. was ready for a serious brawl, but found itself in an embarrassing blowout instead. Dispatching Iraq took the better part of 72 hours. There would be no more direct contenders for the title of world superpower.

A generation had been raised to expect that the world would end in an epic conflict of good (us) against evil (them), only to learn that the U.S. was so powerful, it didn’t even need to fight adversaries—but that when it did fight, its might was irresistible. The childish, cartoon-like worry that America or Europe would be outnumbered and overwhelmed by some evil horde bent on destruction was untrue—and it remains untrue.

The decade following the Cold War’s plodding end was filled with ethical wanderlust and ennui. It sounds sick—it was! It was sick!—but when you’ve been conditioned to look for war, you don’t just put that mentality down and walk away from it. We missed the easy confirmation evil gave that we were not evil ourselves. Reluctant to admit that the world was now a Western hegemony without any substantial external threats we warily tolerated the good times, wondering if that was all there was to life—if, as Fukuyama declared, the fall of the USSR was “the end of history.”

Of course I remember 9/11. I remember it well. I could feel the rhetoric change in real time, on television, from the “things are pretty good I guess” of the 1990s to the comfortable old “well, lads, guess we’re in it again, to win” of the Cold War. I’d been part of a blessed crew, the first generation to truly “have it easy”: no war, no depression, just boundless opportunity—with me, as a white American male on top of the food chain. Lame—until those towers crumbled. Suddenly, we were back in a world I remembered from the 1980s, the one in which I’d grown up, rife with fear, necessary violence, and dark conspiracy. A world where one did what one had to, and what one had to do was necessary, and what was necessary was a lot of violence to other people, for a good cause. A just cause.

It’s disingenuous to claim that we didn’t know how 9/11 would change us. We did. I knew, immediately, that it meant we were back in that cartoon version of the world, the Transformers world where fighting might mean losing against the bad guys, but we were good, and fighting is what good people do, against bad people. 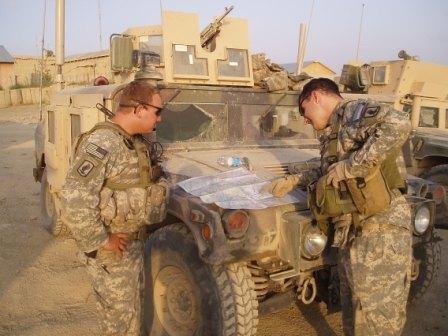 During his deployments to Afghanistan, Adrian served as an infantry officer in the Army. Courtesy of Adrian Bonenberger.

It also meant—and this is sad—that we never actually got down to the difficult and complex task of creating a sustainably peaceful world. September 11th meant we’d always be fighting—that’s what the Global War on Terror was. The wisdom of the WWII generation, which helped Vietnam play out the way it did in the 1960s and 70s was discarded in favor of a kind of reactionary quasi-fascism. Bon voyage Vonnegut, so long, Sartre! Can it, Camus, we don’t need you any more. Don’t think so? Look at a map of conflicts in the world, in which we’re directly involved to no obvious or necessary end, with no set deadline. Looking at the reactionary way in which we evaluate problems, and posit solutions.

The 1990s were good and safe, and boring. We realized that the peace we’d fetishized was an almost intolerable ordeal. Coming out of the Cold War, living in beautiful, comfortable suburban Connecticut I learned how dreadful life could be without an external antagonist. Simple prosperity wasn’t enough—enough was a replacement for the USSR, and eventually that replacement showed up.

The way 9/11 affected me, personally—and I think the way it affected all of us in the West but especially America—is it let me off the hook from having to critically self-examine the way we in the U.S. live. September 11th allowed us to focus our most harsh criticism on other countries and cultures. When we were at our strongest, we went for the weakest play, pointing the finger at others. We (Americans) criticized China and Saudi Arabia and Israel for failing to live up to their human rights obligations while dismantling our domestic welfare state. We ramped up President Reagan’s counterproductive War on Drugs at the same time that doctors were encouraged to prescribe opiates to people with health insurance. We demonized the industrial workers who were increasingly losing their jobs to overseas companies or crude machines. We invested in technology and took out cheap loans for houses it turned out we couldn’t afford. We scammed the global system as hard as we could, because nobody was there to stop us. And we—we did this, nobody else did—we turned the Middle East from a potential war zone to the very active and totally unstable human rights catastrophe we have today. Instead of finding out what America could achieve without any serious enemies, we chose the cartoon version of ourselves, fighting what we called evil in pitched battle after pitched battle we knew we’d win.

So this 9/11, I look back on the wars we’ve had since 2001, and look forward to the many more we’ll be fighting in the near and distant future. To paraphrase clever military strategists, it is better to fight the enemy abroad than to fight one’s own inclination to shirk responsibility at home. And that—as every combat veteran with whom I’ve spoken when nobody’s listening, often over beers—is ultimately what it comes down to. Do I wish we were serious about improving ourselves and the world? Of course! Are we? Looking at the evidence: absolutely not.

All Time Is All Time. It Does Not Change.
Scroll to top