After my nearly 6,000-mile ocean voyage from San Francisco to Guam, I reported in at the U.S. Naval Communications Station to begin my 18-month duty tour as a communications technician (today called cryptographer). I stowed my seabag in the assigned old World War II Quonset hut, which would be my home for the next year and a half, and reported to my new division officer, Ensign Johnson. He quickly briefed me on my duties and explained what he expected of men under his command. He was strictly business, and I liked him because he was a mustang—an officer who’d come up through the enlisted ranks.

He assigned me to begin duty at the direction finder shack, a refurbished old house located on the base that, though deep in the jungle away from other buildings, could interfere with radio signals. He said the direction finder operates 24-7, and the chief in charge would fill me in on the specifics. 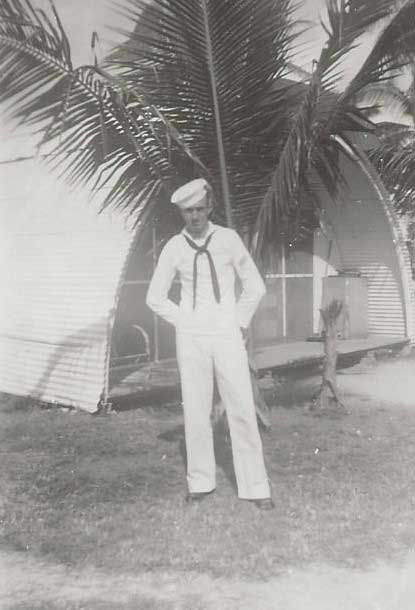 Bob Foster’s Quonset hut in Guam in 1953. Photo courtesy of the author.

Johnson stared at me for a long moment. “Any questions so far?”

“Good. You’ll find the work pretty routine.” Then he grinned. “But once in a while, it may get rather exciting.”

“How so?” I asked with interest.

“There are some Japanese soldiers left over from World War II still running loose around the island,” he told me. “A time or two they’ve rummaged around outside the direction finder shack and stolen everything not nailed down. But don’t worry—you’ll have access to a loaded M1 carbine and a .45-caliber pistol while on duty at the shack.”

That got my attention.

“Japanese soldiers, sir? I thought that war was over.”

“It certainly was,” he agreed, “eight years ago. Evidently, some of the Japanese soldiers stationed here on Guam didn’t get the word—or ignored it. In their culture, most men believe good soldiers never surrender. The ones we’re looking for took this code to a whole new level. They hightailed it into the jungle and became outlaws, living off the land and menacing American service personnel, as well as threatening, beating, and robbing Guamanian residents, many of whom live in remote jungle locations far from military or police protection.”

“Hasn’t anyone tried to capture them?” I asked.

“Several times,” Johnson said. “In 1944, Guam’s police chief, Jon Wigg, organized the Guam Combat Patrol to search and destroy or capture them. It was active until 1948, and during those four years, they killed 117 Japanese soldiers.”

But, he told me, that wasn’t all of them. Some had eluded both the patrol and the Marines, so beginning in 1953, Johnson said they nailed notices in Japanese on trees, as well as dropping more than 15,000 leaflets from Navy planes. The notices promised that the Japanese soldiers would be treated well and reunited with their families if they surrendered. 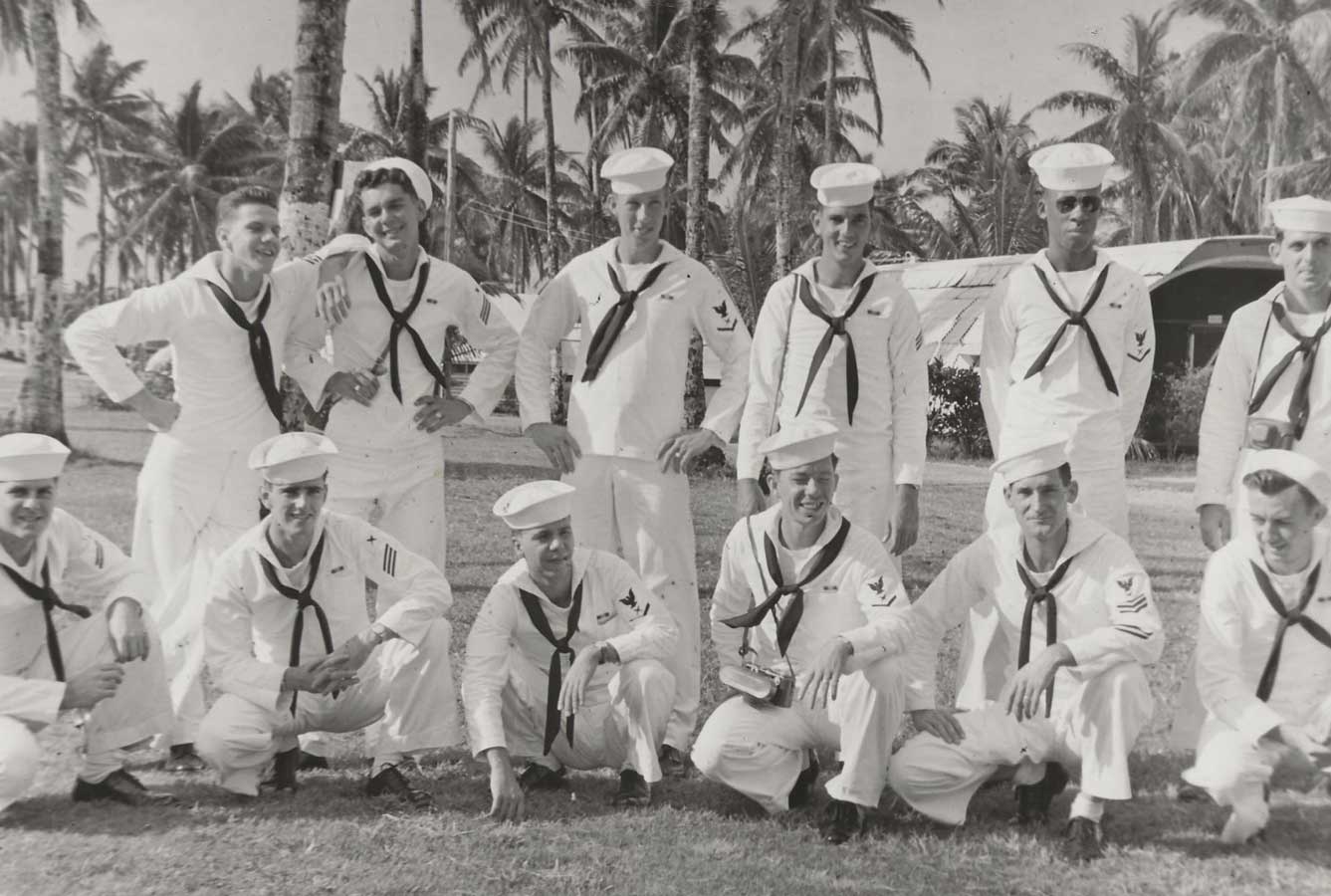 “So far,” he said, “nothing has worked, not one of them has come forward.”

“How many of them are still out there?” I asked.

“No one knows for sure,” Johnson said. “A couple of Guamanian fishermen told us they saw five of them stealing fish from their nets.” He looked at his watch. “I’ve got to run to a meeting in a few minutes, so let me quickly mention our latest strategy to capture those renegades. It’s called ‘Operation Straggler.’ We’re going to drive them out of their hiding places, round them up, and ship them back to their families in Japan.” He grinned broadly and added, “At least that’s the plan—and you and your buddies get to participate!”

Walking back to my hut I mulled over what Johnson had told me. Deep down I felt no animosity toward the Japanese soldiers—unless it was for self-protection. I was only 12 when the war ended, but I still remembered the negative comments by parents, teachers, and neighbors about the Japanese enemy who would rather die than surrender. But that had been years before. Now I get to help round up some of those guys? I thought.

The U.S. military, with Japanese assistance, launched Operation Straggler. Everyone on the island was elated—except the former Japanese soldiers. They always seemed to know what was going on. They’d been in hiding for eight years.

My buddies Chuck Flatt from Moscow, Idaho, and Ben Cupoli from Columbus, Ohio, had waited for Operation Straggler. It was finally here. And this is how it went down:

The sticky air created a wall of humidity. More than a hundred sailors in our group, commanded by a Marine gunnery sergeant, were spread east to west across our appointed jungle sector. We were spaced 20 yards apart, walking south. Ben was on my right, Chuck on the left.

Easy for him to say: He was a combat Marine with a gun. We were sailors, not soldiers, but we took courage from the armed Marines who anchored each end of our line to respond if the Japanese fired on us. Our line moved slowly, sailors chatting and making noise. 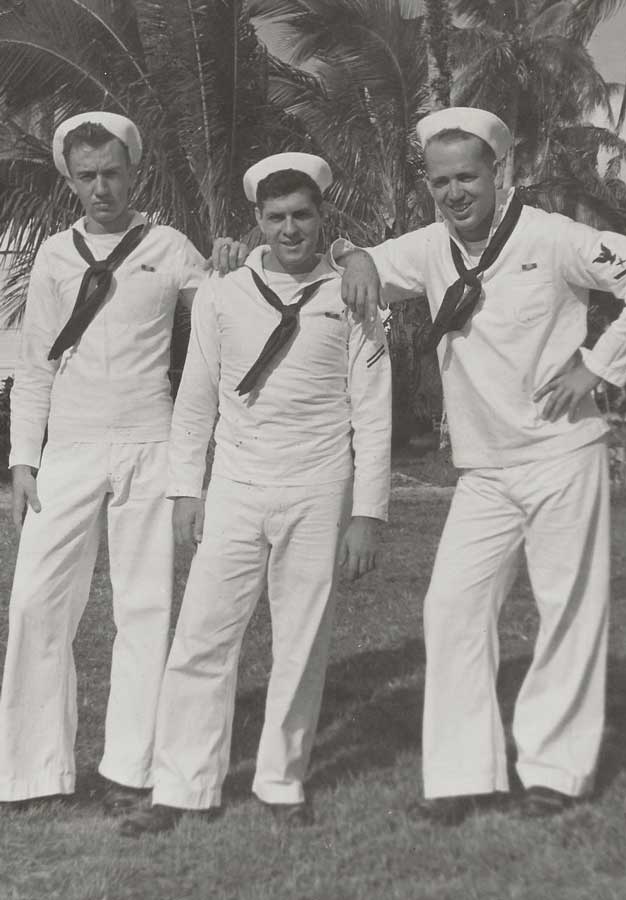 Bob Foster, Ben Cupoli, and Chuck Flatt in Guam in 1953. Photo courtesy of the author.

“Hey!” I hollered over to Chuck, “back in radio school, they didn’t teach us how to round up Japanese soldiers.”

“Maybe they should have!” Chuck shouted back.

We heard only U.S. sailors tromping through the dense jungle, shouting now and then, trying to frighten the Japanese into walking out of the jungle with their hands up. Gunny suddenly threw up a hand for silence. Total jungle silence set our nerves on edge. A weird silence. Nothing. No birds, no insects. No breeze. Almost as if the Japanese owned and controlled the jungle and everything in it, and we were enemy interlopers in their private sanctuary.

“Just like the old days, huh, Sarge?” the officer said, nodding in agreement. “When we hunted them down back in 1944.”

I don’t know how far we walked, but it seemed like miles as we sweated our way through the seemingly endless hilly jungle terrain. Atop two of those hills, we discovered expertly concealed Japanese lookout towers from which they could observe everything for miles and spot anyone moving toward them. They could be long gone before we even got close.

There would be no gunfire that day.

Some months after leaving Guam for new stateside duty assignments, Chuck, Ben, and I got word from buddies still in Guam that five Japanese stragglers had voluntarily surrendered.

Their war had finally ended. They had done their duty with honor and were flown back to Japan and reunited with their families. Those five soldiers were the last stragglers on Guam—so the paper reported. 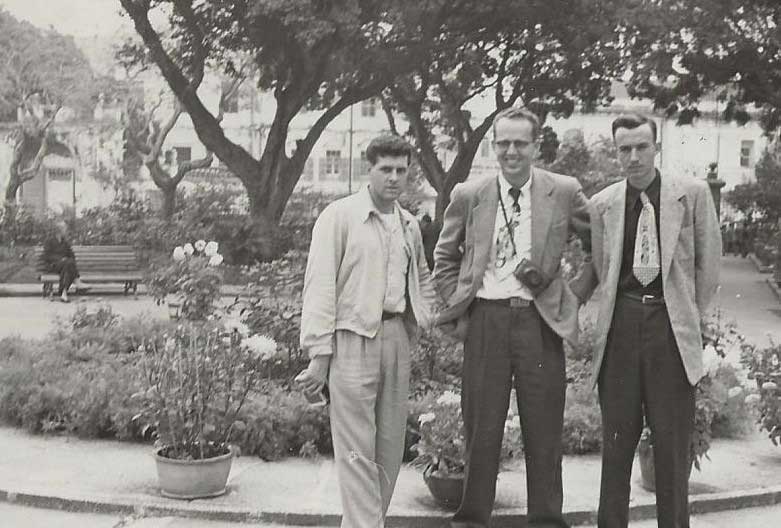 Ben Cupoli, Chuck Flatt, and Bob Foster on leave in Hong Kong in 1953. Photo courtesy of the author.

I was a civilian in 1972, and my memories of Guam were almost forgotten. But those headlines intrigued and piqued my curiosity because I may have searched for this famous Japanese soldier those many years ago.

Who was this last straggler who’d outfoxed the U.S Navy, Marines, Air Force, and Guam Police for nearly three decades?

Sgt. Shoichi Yokoi of the Japanese 38th Regiment was transferred from army duty in Manchuria to Guam in 1943. He was 28. When the 38th surrendered to U.S. Marines in 1944, Yokoi took to Guam’s jungles, hid out, and eluded capture until January 1972—almost three decades. After he surrendered, he went home and quickly became a Japanese national hero. He later wrote a book about his military adventures, which sold well in Japan. His greatest joy, he said, was going to the Imperial Palace, where he was received with deep courtesy and honor. He passed away in September 1997, at age 82. 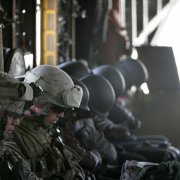 Hellfires and “Half-Smashed Bugs” in Sadr City
“Heroes Also Need Heroes”–Robbed of a Chance at Combat, Marine Joins Another...

Falling out of love with war: It could never live up to my expectations.
Scroll to top