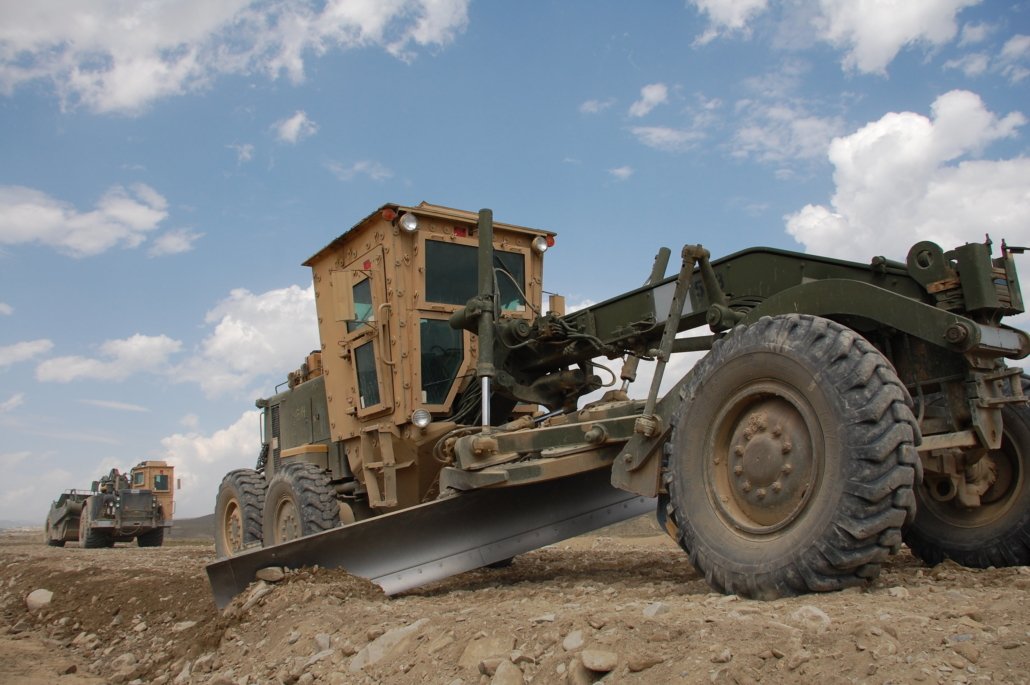 I was in the Afghan countryside in Paktika Province with a small U.S. military convoy and construction crew. They were building a road. I was enlisted in the U.S. Air Force, working as a journalist for a military magazine, so I took photos and interviewed soldiers and Afghan villagers. My work was done and we weren’t going back to base anytime soon, so my attention started to wander. That’s when I noticed them and their goats.

READ MORE
Brother, Forgive Me. "I Cannot Carry the Consequences of This War Alone."

I left the road and started across the dirty sand, or sandy dirt. I looked for tripwires, landmines and anything else suspicious. As I got closer, the two girls noticed me, stopped playing, and huddled together on the ground. They watched as I made my way closer. They looked me up and down over and over, a stranger in alien clothes, armed, big. The younger girl covered most of her face with a scarf. They seemed concerned, but not scared. I got within about 30 feet and the older of the two put her hand out, palm toward me, as if to say, “That’s close enough.” I stopped and placed my right hand over my heart, a Muslim greeting. They didn’t respond. 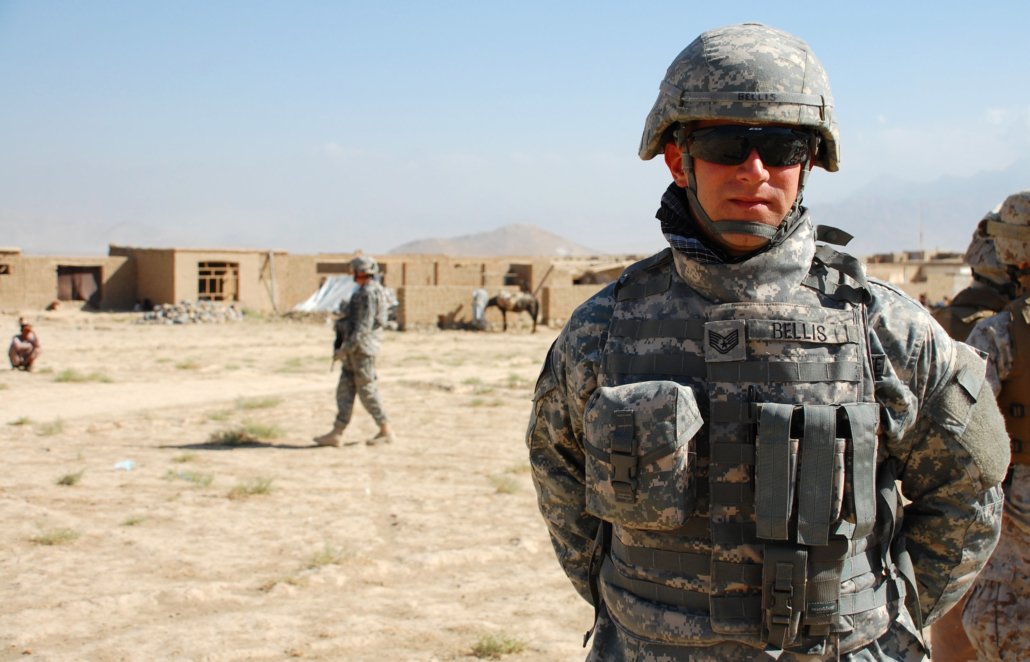 I was covered in protective gear; the only skin showing was from the bridge of my nose to my chin. So, I smiled as wide as I could. I guess I overdid it, because they both laughed. We weren’t friends yet, but the mood was starting to lighten. The older girl spoke to me in Pashto. I didn’t recognize her words, but she was definitely asking a question. I shrugged my shoulders and smiled. She murmured to the younger girl, then turned to me and spoke again, louder. I shrugged again and smiled.

Both stared at me incredulously as their tangled hair fluttered in the breeze. The older girl had spoken to me and, clearly, I had heard them, yet I didn’t understand. It dawned on me that these two girls, who were maybe 10 and seven years old, might have been unaware that other languages existed. 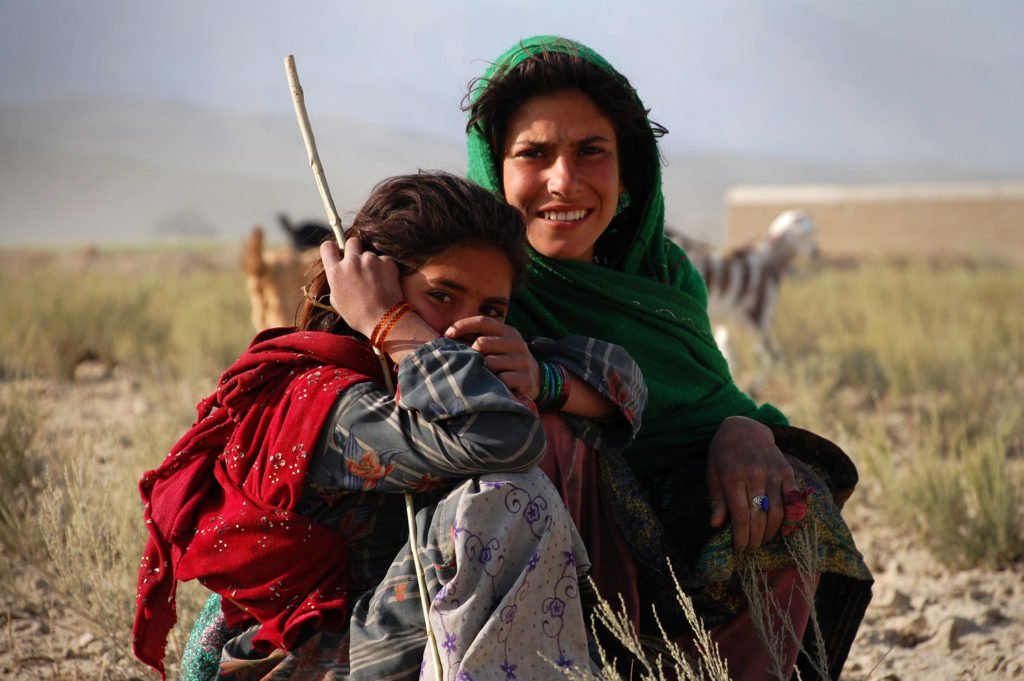 I raised my camera and lifted it toward them, showing its harmlessness, silently asking for permission to take their picture. They shrugged, a gesture that was the foundation of our new language. I squatted, took a few photos, then stood up and took a few steps closer. Both girls, startled, shot to their feet and scurried backwards in a small cloud of dust. I stopped, raised my hands and squatted back down slowly. I smiled again, less awkwardly this time. They looked at each other and slowly huddled down again. They were upset with me. I had broken our distance agreement.

I let my camera dangle from its strap at my side. I slowly raised my hands, put my thumbs on the sides of my helmet and waved my fingers like moving moose antlers. The girls were curious. I stuck out my tongue and made a rude noise. They laughed. We were at peace with each other again. 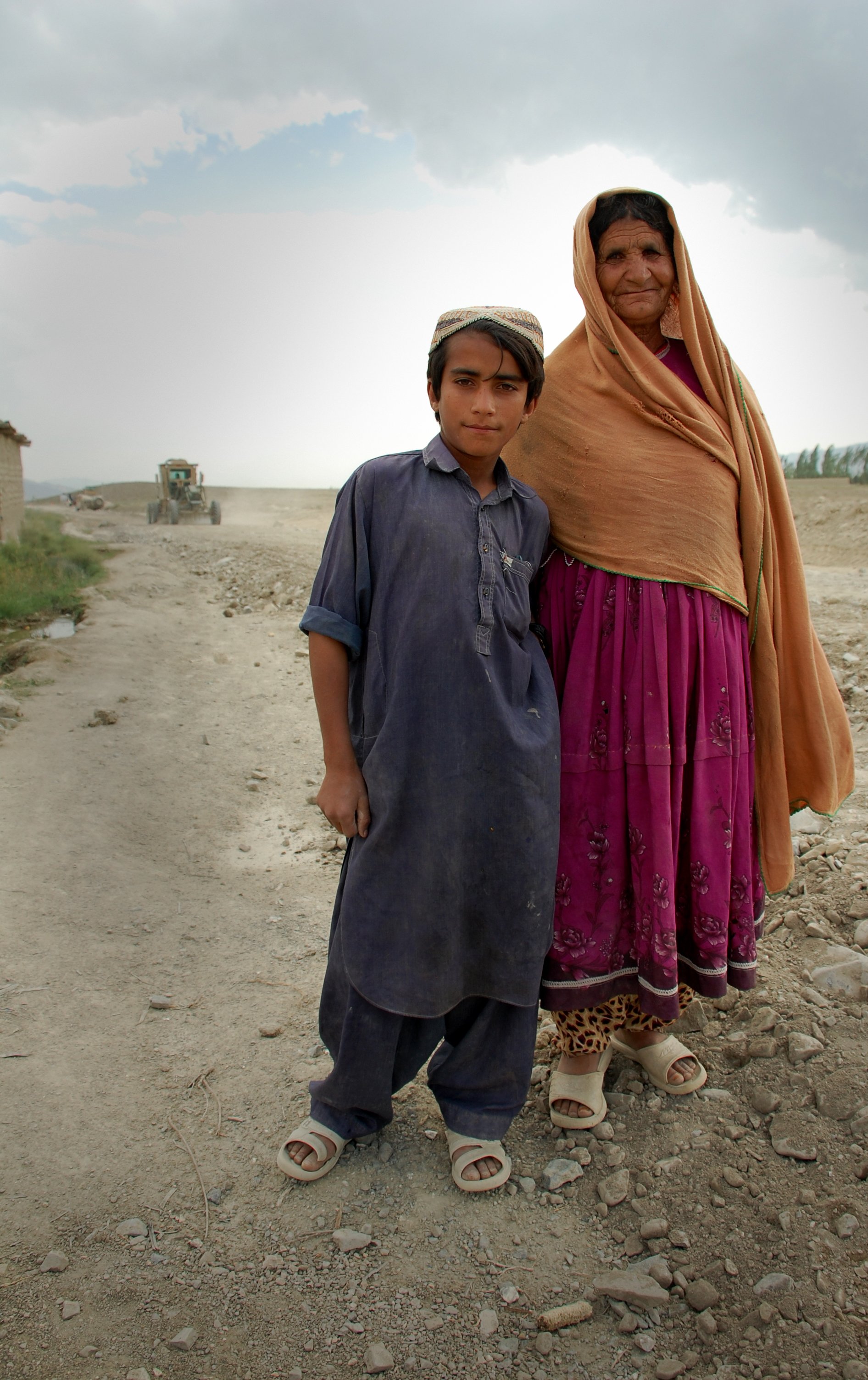 A boy and his grandmother pose for the camera with US Military construction equipment in the background. Paktika Province, Afghanistan. Photo by Dan Bellis

I looked over the barren landscape and didn’t see any structures, no house, no shack, no tent. They were out in the field alone, under the sun, in charge of the goats. Their hands were dirty and grown up. These girls worked for a living. They probably didn’t know how old they were in terms of years, only in moons. They had seen war, but not television, malls, or tricycles. They could play in the dust, but only after the work was done. They had been tasked with their family’s survival. They were tiny adults. I wanted them to be children. I wanted to hug them and give them candy and toys. I wanted to tell them that I was proud of them and that they were tougher than most of the adults that I knew, that they were tougher than me. I felt like a fool for taking my life of privilege for granted—for ever having sent food back in a restaurant or for being disappointed in my birthday gifts. I was weak and entitled, and I was ashamed.

We kept our distance and made faces at each other and giggled. I danced a little for them. They were unimpressed; I was embarrassed. I took a few more photos. Each time, they looked a little confused. They didn’t understand the camera, but they had gotten used to it.

I wanted to stay and play, but I felt like I had been away from the convoy for long enough. I was out in the open, exposed. So I raised my hand in a wave, then pointed over my shoulder to the armored vehicles. The older girl made a “tsk-tsk,” and looked at me disappointingly. I shrugged and smiled. She shrugged and smiled, waved, then ran off with the other girl.

I looked back down at the ground for tripwires and landmines before I stepped. The sweat was heavy in my helmet and boots. I watched little sand clouds settle around my feet. I thought about a hot shower, a clean uniform, and my thin, government-issued mattress back on the base. I thought about where my new friends would sleep that night, but I couldn’t picture it. I thought about how this country that terrified me was their playground. I thought about going home, back to my air conditioning, grocery stores, and taxis.

I turned, hoping to catch one more smile. I spoke to them for the first time. “Thank you,” I said, but they didn’t hear me. They were already lost in a cloud of dust and a rousing game of chase.

A child runs alongside a convoy departing her village in Parwan Province, Afghanistan. Photo by Dan Bellis