I don’t think I’ll ever meet anyone quite like Joe. He’s a big Native American Cavalry Scout with a gleaming bald head and sharp features. He looks just like Magua in the 1992 adaptation of Last of the Mohicans, and I was more than a little scared of him at first, but he’s more than an imposing face. I remember after the repeal of “don’t ask, don’t tell,” he told his soldiers about the two-spirit people and the immemorial tradition of gay and transgender spiritual leaders in Native culture. We listened to him. Though I was assigned to another platoon, it was clear even to a relative outsider that his men loved him. He brought them hunting and fishing, took problem children under his wing, and was always there to offer advice. In Joe, I saw a man equal measures martial and kind. Joe knows war. He fought with the Marines in Somalia, then left the service only to join the Army after 9/11. He was there at the beginning of the Iraq War, redeploying tour after tour, fighting. We met before deploying to Afghanistan together. Our time there was violent. He was the first soldier in our unit to kill someone at close quarters that year. I was the second.

After that, my unit’s Platoon Sergeants—Joe among them—took me into their care. They’d all killed at some point over the course of our long war. There was no celebration of what we’d each done. We never spoke about killing; we only needed to be around one another. We ate together, took coffee together, smoked together. I’d tell them about lost sleep or bad dreams, and they’d nod knowingly. It was enough. In those career Sergeants, I saw a glimpse of my future—we all made a life out of war; we simply chose to do it in different ways.

Unlike them, I would leave the Army, but I’d never stray far from the violence that I’d seen and committed. Those senior NCOs chose to make their livelihoods in far-flung war zones. During my first year as a civilian, I chose to work with refugees who’d fled those war zones. I continue to tread that familiar, violent ground in the writing I do every day. There are days that feel as if I never really left Afghanistan. I wonder sometimes, knowing what we individually and collectively had done, if men like Joe and I could ever fully rejoin society. I never lost touch with Joe. I didn’t think I could stand losing him from my life. After I tried to kill myself during my last year in the Army, Joe was there, along with the other members of our unofficial, silent support group. I don’t think I could have survived without Joe. In the months before my discharge date, we never talked about coping mechanisms or triggers. Instead, he’d teach me little tricks for fly fishing, knife sharpening, and animal tanning. I trusted everything he showed me with those big, gnarled hands, which were somehow able to accomplish the most delicate tasks with lures and fine gossamer fishing line. He knew I’d never have a use for such things when I finally returned to New York City, but I like to think it was his way of telling me how to take things one step at a time. Of course we would talk about war. It’s impossible to avoid. We’d talk about his days in Iraq fighting house to house, his time sitting in a sniper’s blind in Mogadishu, our days together patrolling the dusty plains and dense green zones of Afghanistan. Our conversations would get dark. We’d trade the same old gruesome stories that we already knew—enemy heads obliterated by large-caliber rounds; allied policemen captured by Taliban, their arms bound and throats slit; a comrade who’d taken shrapnel to his penis, but still conned his way back to his unit. I think it was just a way of making space for the horror without letting it take control.

More than that, he gave me the space to mourn the man I killed. We had both taken photographs of the men we’d killed in combat—standard operating procedure for sensitive site exploitation—but keeping those photographs was prohibited. We kept them. There isn’t a procedure for what happens after you take someone’s life. One day he showed me the photograph he kept. He didn’t talk about his enemy with the kind of malice so common among fighting men, nor did I see a trace of anger on his face. It was a matter of life or death, but he still seemed somber over what happened. I showed him the photograph that I kept, and he told me, he looks like a warrior. He showed me that I didn’t need to hold onto things like hate or bigotry to live with what I’d done. Just seeing the expression on his face, neither regretful nor triumphant, I finally believed that my sorrow had a place. Joe didn’t need to speak for me to understand what was in his heart.

Imagine how it feels when a man like Joe, a man you love, sends you a beheading video.

It was after the first Muslim and refugee ban. I remember watching the drama unfold on TV—hundreds of protesters flooding Kennedy International Airport in New York City, lawyers toting fax machines and laptops into the terminals, and all the president’s men spinning words from teleprompters. The politicians said that people just like my parents—refugees from another war of America’s making—were parasites and rapists and terrorists. The America that I fought for, killed for, felt like a foreign country after hearing that. I circulated a petition started by other veterans, which called for an end to the executive order. Joe saw things differently. He told me I had better things to do with my time.

The next day, Joe sent me the beheading video. Don’t mean to be argumentative, he said, just want peace here at home. The horror in the video was supposed to serve as proof that these people—the ones just like my parents—were violent. I didn’t watch it; I knew what to expect from the decapitated body in the thumbnail. Showing someone violence like that doesn’t start conversations; it draws a line in the sand. There’s a terrible knowledge that follows killing a man. You learn that killing is far simpler than you’d ever imagined. You learn that killing does not exist solely in the realm of fiction, that it is something that you can wield, that others can wield against you. You learn the meaning of finality, of irrevocability. What should soldiers who return from war do with all the things they carry back with them? What do we do with our trespasses, and that which has been trespassed against us?

I still don’t have the answers, but I do know that we each must choose what we do with that violence. I’ve tried to drown those questions with drink. I’ve tried to atone for killing with good deeds—though nothing I’ve done will ever make up for taking a life. I go on writing and rewriting the war every day, as if the act of putting words on a page will somehow reveal something about the things I’ve done that I have yet to discover.

I like to think Joe struggles with these things too, that he struggles to find answers. I know that he’s found some peace through God, that he finds meaning while hunting Louisiana’s pinelands or fishing its rivers and streams, that he prays that his soldier son will remain safe until this war finally ends. I also know that he has faith in the president and his men, and their policies. I know there is prejudice and violence and rage in his heart. I see those things in a man whom I love, who has cared for me.

When he sent me that bloody, horrific video, I had to choose what to do with the prejudice and violence and rage boiling in my heart. It would have been easy to cut ties, to end our friendship. We could have found ourselves on the opposite sides of the new battle lines drawn all across our country. Who would blame me? I chose to see Joe for all he is—the warrior, the comrade, the killer, the mentor. I told him that I valued his friendship, no matter how much we disagreed. I told him I’d never turn my back on everything he had done for me. I said these things because I know that I cannot carry the consequences of this war alone; I said these things because I love Joe. I said these things and he called me brother. He said, forgive me.

Their Love Would Thrive Or Die Thanks To The Corps 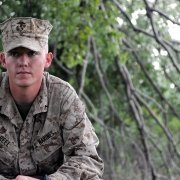 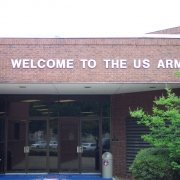 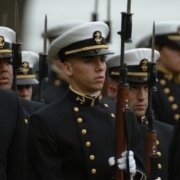 For the Love of Machine Guns
Scroll to top