The panic started slow. Woke up at six, groggy from the weed the night before. Half consciously stumbled into the bathroom and mechanically brushed my teeth. Had been home from the war for years. Had been out of the Marine Corps for years. Had never been lost in time like this. This time, the first time, I didn’t know how to read the signs—the darkening sky, the electricity in the air, the tell-tale indications a storm is blowing in—the electric hurricane. When the system, which had been picking up energy and speed in the unknown gulfs of my grey matter, made landfall in my frontal lobe, it touched something off in my brain. Everything, memories, emotion, motor function, and my sensory inputs were all suddenly connected, and my consciousness jumped seemingly at random throughout the whole knotted, scrambled system. Didn’t know that morning, the first time the panic came, that I was already caught up in the squall. The warnings were still too mixed in with the early morning space between pillow and first cup of coffee—the grey pool between dark, dreamless sleep and the day. The way you are trapped inside your own head in a dream—that’s how I was trapped now, unsure if I was asleep or awake, alive or dead, real or something imagined.

Got to the car before realizing something was wrong. The waves of realization, of panic; the tide of unknowing began creeping up the shoreline of my mind. Didn’t know who I was. Couldn’t remember.  Knew facts: My name is Pete Lucier. I am 27 years old. I am in Bozeman, MT. Could pull them from that place where dates and names lie. But memory was gone—like losing your sense of smell when you’re sick, or seeing nothingness when you close your eyes. Then came fear. The dread. My world became small. The voice in my head, no longer my own, from a deep part in my brain I was rapidly losing, tried to speak over the noise of the storm. Focus on your hands, then just your thumbs. Couldn’t move. Had forgotten how. Nothing was real. Was being blown about in the gale winds, soaked in the pouring rains. Was mindless, in the grey space.

In the grey place, nothing is real.  I was just a sack of meat that walks upright, covered in the absurdities of tiny white hairs, and scars, spots on my skin, the little white ovals in my fingernails, none of which convey meaning, or identity. I am Billy Pilgrim, unstuck in time.

Coming unstuck from time means I’m never where I am. The past is as real and as present as now. I’m frozen in front of my computer screen, trying to type the story I’m telling you. I’m in a field in Afghanistan. I’m in my car, last October, unable to move, crying. Between the meds and the booze and the coffee, the Adderall, the weed and the adrenaline, the fear, the story is cloudy. It’s always cloudy and it doesn’t matter where I am or when I think about it, nothing stirs memories. There are questions I still don’t have answers to. Peter Lucier at a hunting reunion with his squad just a week after the first panic attack, five years to the day after their unit deployed to Afghanistan. Courtesy of Peter Lucier

I remember an explosion. I think it woke me up. It wasn’t far from the patrol base where I was sleeping. I was groggy then too, groggy like the morning in October, groggy like I am now. I remember smoking a cigarette, waiting to rush out on Quick Reaction Force (QRF). I remember being ready to run; then the word “hero” came over the radio. I remember my sergeant yelling at me to put out the cigarette. I think he thought I was being too casual, too cavalier. He didn’t know my hand was trembling, and that I was pulling the acrid, dry smoke into my lungs to try and steady myself. His tone startled me. I crushed the butt under my boot quickly. He turned to the group, and told us to take our time; the casualty was already dead. A Memorial Day tribute to Kaipat, the Marine who died in the IED explosion, five years after he was killed. Courtesy of Peter Lucier

I don’t remember getting to the site of the IED blast. I remember being down on one knee on the east side of the cordon, facing outboard, away from the blast site, into the nearby fields, while others cried, or tried to pick up the pieces that were left of him, of the hero, of one of ours, who was now just pieces of meat scattered along the side of Route Crimson.

A motorcycle sped up Route Crimson from the west. It was approaching fast, from the dangerous side of the Helmand line, Taliban country. Was this a secondary? A follow-on? On the battalion’s last deployment, many of the Marines in the field with me now had seen a suicide bomber on a motorcycle. I hadn’t been there, but here we all were now, with seconds to decide whether this motorcyclist would live or die. If we didn’t kill him, he might die by his own hand, taking some of us with him. But what if we chose to become executioners, and killed an innocent man? Shooting, not shooting—both would be acts of faith, decisions based on imperfect information.

Would he turn? Would he see us? No time for escalation of force measures. No time to wait and see. On and on he sped. Was there murder in his eyes? Had he not heard the explosion? What spurred him along that morning?

Still speeding towards us. Did he have a family? This speck, brown skinned, brown clothes, brown from the dirt, speeding towards thirty heavily armed Marines, who had just lost a brother, thousands of miles from home? I couldn’t think, couldn’t process. I was stuck, frozen, like the first time I had had a man in my sights, like the first time I had heard gunfire shot in anger, like the October morning in Bozeman, the morning of the electric hurricane. The onrush of information overwhelmed me, but still the motorcycle man sped on.

“Just kill the motherfucker.” The order was shouted out to those on the west side of the cordon. This was it. The moment. We had shouted and waved; he hadn’t stopped. His life was ours now. We were legal. We were justified. We were pissed. We were still in those first frightened moments of mourning.

A Marine stood up and shouldered his rifle. Wait! I wanted to shout. Just give him one more chance. But I couldn’t speak. It was too fast, too damn fast. I still hadn’t looked at the blast site, still couldn’t look inward. I needed time. I needed to stop, to breathe, to comprehend, to understand, to process. Just wait! Hit pause! None of this felt right. The author, Peter Lucier, in the hospital the day after his first panic attack, waiting for the Ativan to flow through the IV. Courtesy of Peter Lucier

I’m back in Bozeman. Everything is happening fast, too damn fast. The thoughts connect and collide and separate too damn fast, and everything is in the past. The sack of meat that I once knew as my own body is crying, the faraway voice, the one in my head, the remnant of myself, is fading.

Crack. Crack. Crack. Dust rose from the berm around the road. The rounds had hit dirt, not flesh. Brakes squealed. The man stopped. He could see us now: a ring of dust-covered Marines, menacing shapes of coyote brown and MARPAT, interspersed between lumbering, awkward vehicles designed to withstand an IED blast. Seeing our stubbled faces, our tears, he turned and sped away.

“What the fuck?” from the one who gave the order. There was a weight behind the question. It hung in the air.

“I missed,” the shooter said.

Phone call with mom made me feel better. It’s OK to open the car door and walk inside. The world begins to reorder itself as foot falls in front of other foot, moving forward again, time not quite as fractured as it was before. 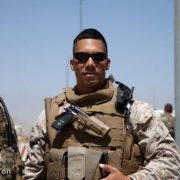 Losing Trust in the Branch He'd Pledged to Serve 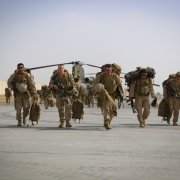 When The Purple Heart Weighs Heavy
Scroll to top