It happens most nights. I’m running through the jungle, sometimes the desert. Jordan is by my side—it’s always Jordan. There are enemies, none I’ve ever encountered before in real life. None I ever will. They’re inexplicable. The whole experience is, until I awaken and realize it was just another dream.

The episodes recur enough to make me wonder if I actually want to be back in the military. But however tantalizing that thought is at night, the day sobers such fantasies. I have a new life now. One separate from the military. Or, at least it seems so.

Like nearly every service member, I signed an eight-year contract, which is divvied up between active duty and a service component known as the Inactive Ready Reserves (IRR). Usually contracts are split 50-50. Four years spent on active duty. The remaining four years spent in the IRR, which requires nothing of an individual yet prioritizes his or her name for recall should another large-scale conflict or national tragedy call for mobilizing a mass amount of troops. It’s a system designed to stall the institution of a nationwide draft. Nathan Eckman served four years on active duty in the Marine Corps. He did not deploy to a conflict zone, and he struggles now with what his service meant. Courtesy of Nathan Eckman.

Each day that I read about another escalation between the United States and North Korea or Iran, or hear about the intensifying situations in the Syria and Yemen conflicts, I think my days are numbered until I have little choice but to throw on a uniform again.

I was young enough when I first joined the military to leave everything behind and not think twice about it. Then, I built my life around that responsibility; and once Emily and I married, we did the same. There was nothing unsettling about being away from our home most nights, in part because we knew those days would end. Now we live under the illusion that my commitment to the military is over. Technically speaking, it’s not. Until the end of 2019, I am part of the IRR.

In the time since I exited active duty, Emily and I have built a life for ourselves and have dreamed of the family we’ll start, the community where we’ll root ourselves, and the careers we’ll build. My sense of what duty is has morphed since I was 19, and military service won’t satisfy it anymore. I left the military to regain a sense of personal agency. Were I to be recalled, I’d be forced to accept that since I “left” I’ve had only the illusion of control. And whether I would accept or deny the call to serve, the call itself would change my life; I’d have no way of stopping that.

I’ve already given up some of life’s privileges once. The thought of returning to service and doing it again feels daunting, if not impossible. Knowing what it’s like to make that sacrifice, the life I’ve built now is all the more precious to me. As simple as falling into a morning routine at a local cafe; eating leftovers while standing at the counter; styling my hair, shirts, and shoes until the mirrored reflection is “me.” Those are a few of the small things that bring me comfort and remind me that I’m home, and that this indeed is my life. And while those parts of life are nice, I could go without them. The author, Nathan Eckman, and his wife, Emily, have moved away from the base where he was stationed to start their new life together. Courtesy of Nathan Eckman.

Then there are the parts of life I’d vehemently oppose surrendering. Living my life beside Emily, each and every day, tops that list. Second, I think, would be my freedom to think and question whatever I pleased, without fear of retribution from those who outrank me.

This is where it gets even more complicated. The more I value these liberties and privileges, the more I should be willing to fight to defend them, right? Regardless of the personal sacrifice. After all, wasn’t that the point of my service the first time around?

But having worn the uniform once already, I can’t help but feel that I’ve done my part, and that now it’s someone else’s turn—but not “the someone else” I’ve become since leaving active duty.

The man I’ve become since leaving active duty has something else to add to the world, both because of and in spite of my military service. Starting in high school, I thought I would achieve my greatest life accomplishments in uniform. Now that my uniform’s off, I know that my service was just the start. Finally, I see the society that I swore to protect is as valuable as the society of its defenders. I can imagine myself writing books, hiring employees, and attending city council meetings, and today I think that’s just as important as the service I’ve already completed in the Corps.

This, perhaps, reveals my greatest worry. I’ve realized my identity does not depend on my relationship to the military. Returning to its ranks now would mean sacrificing not just the things I gave up the first time around but the life I’ve built since leaving active duty. This second life, though, is young, fragile; there’s no telling if this new man would come back from a second term of service. Come Aug. 15, 2019, when I exit the IRR, I’ll never have to wonder again.

Struggling to Find Purpose After "The Service"

My Heart, a Fallow Field 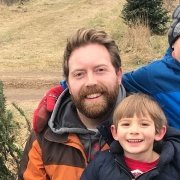 When I Think About My Son

No Use Crying
Scroll to top