The rain on the tent’s roof was loud. I adjusted the Coleman lantern until the mantle barely glowed, checked the safety on my M16 and hung it near the door, noted where I’d put my helmet and flak vest, then removed my boots, loosened my belt, and stretched out on the canvas cot. I closed my eyes.

It was May 1966 and I wore sergeant’s stripes again. I was the 1st Cavalry Division press chief and worked a 24-hour shift every fourth night.

About 11 p.m., the downpour woke me. I reached for the field phone, setting the volume to maximum. Pulling on a poncho liner, I willed myself to relax. I had seen a lot in nine months in Vietnam, including things too terrible to process all at once.

An explosion woke me. Then another flash of lightning, another booming crack.

I lay down again, tried to slow my racing pulse. 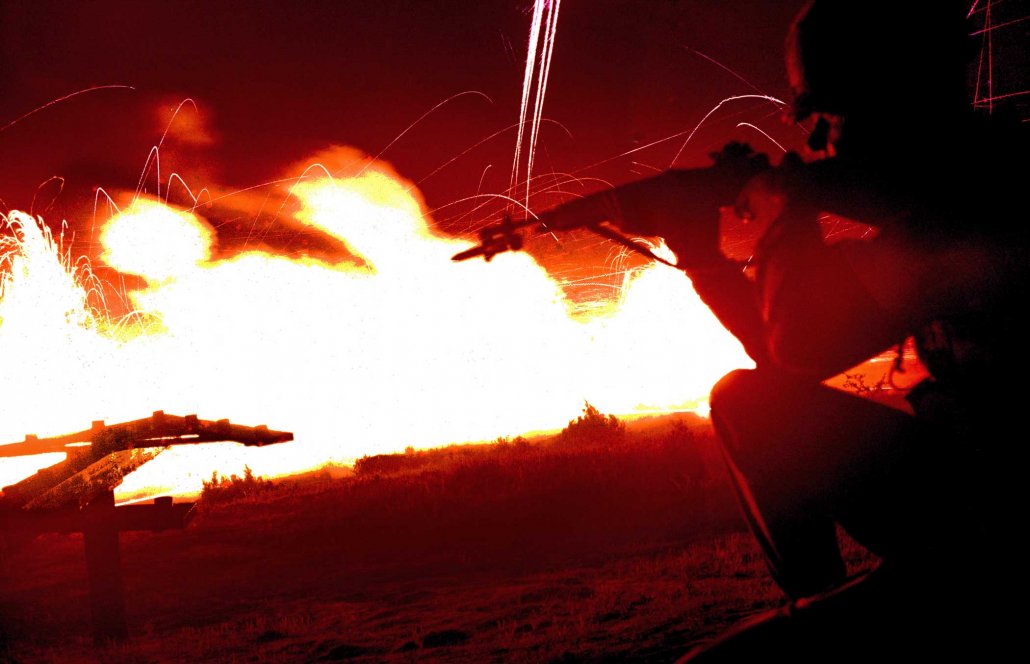 The communications site on Hon Con in Vietnam was attacked several times by enemy units in 1965 and 1966. Photo courtesy of the author.

Somewhere in the twilight haze between sleep and awareness, during a lull in the storm, I heard a single CLICK! from the phone—as if an errant electrical impulse had passed through, perhaps a single electron, just enough to nudge the striker against the bell. I held the receiver to my ear and announced myself.

I strained to hear a voice dancing with the crackling of a wet line. Then the static receded slightly, and I heard first one faint, tinny voice, and then another—both clear and urgent.

“Copy two-one right,” echoed the fainter voice. “Got a load of stiffs, need to set down near the morgue,” he added.

Every hair on my body snapped to attention.

“Copy a hook. The hospital is on the right, halfway down the runway. The morgue is just beyond.”

“Hello!” I shouted into the telephone. “Golf Course Tower, do you copy?”

I listened to the snap and hiss of the open line: I was on a telephone and, amazingly, listening to a radio conversation—how could this happen? Nevertheless, I shouted into the mouthpiece, then listened again.

READ MORE
War Memorials, a Honeymoon, and the Conflict of Life

“Copy a load of stiffs?” said the tower operator, even fainter now.

I shouted into the phone, but there was no response. I listened, jamming the handset against my ear, but there was only boiling grease writhing on a distant grill.

Paul and Marie Harrison were my next-door neighbors during my three-year break in service. Paul was the all-American Boy, ruggedly handsome, muscular, loaded with common sense. He laughed often, worked hard, spoke the truth, made friends easily.

I re-upped, and we both wound up in the Air Cav. Paul was a mortar gunner, but in Vietnam, there were no front lines, no safe rear areas. In the Air Cav, troops alit on mountaintops, then searched for the enemy afoot. Mortarmen adapted their tactics, deploying only one of their three mortars. The other mortarmen were ammo bearers. 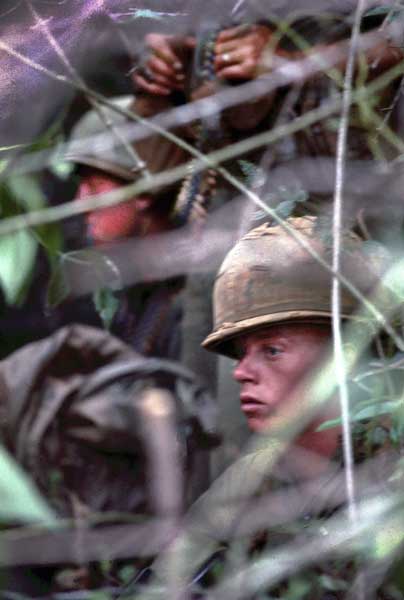 Soldiers with C Co. 1/12th Cavalry Regiment hide in the thicket as they wait for an after-dark ambush. Photo courtesy of the author.

Paul was in Charlie 1st Battalion, 12th Cavalry. We got together twice, spoke on the phone a few times. And each time I heard from Marie, I realized how much she needed Paul.

A mortar platoon overrun. A hook full of stiffs. But there were dozens of mortar platoons prowling the mountains, hunting the North Vietnamese Army. Why did I feel so certain it was Paul’s platoon?

I cranked the phone. “Danger Switch,” a sleepy operator said.

I asked for Graves Registration and waited until a chief warrant officer answered. Did he know anything about a mortar platoon, 19 dead?

“This can’t wait until morning?” he growled.

I explained about the radio conversation on my phone, and the warrant’s voice grew thick with sarcasm.

Had the war finally got to me? I realized that it wasn’t only Paul, that I was also worried about Sam Castan, and about what he had come looking for in Vietnam.

Sam had appeared four days earlier, a dapper man in his early 30s and a senior editor at Look magazine, based in Hong Kong. Hardly had he introduced himself when a mortar shell screeched overhead. A moment later, a muffled thud rose from the airfield. Another screech and another thud. Green tracers laced the darkening sky. I grabbed rifle, helmet, and flak vest and ran for the bunker. “Come on!” I yelled, but when I looked back, I saw Sam staring at the sky, transfixed.

I grabbed his shoulder. “It isn’t safe here!” I yelled, as the incoming increased and the blasts drew closer.

We kept water in the bunker, and C-rations; we ate and drank to the symphony of battle: gunships lifting off, circling overhead to unleash noisy rocket salvos, then swooping low to hose the area outside our perimeter wire with machine guns and rapid-fire grenade launchers. Howitzers boomed and mortars coughed, returning fire. Heavy rockets screamed by, smashing into parked aircraft with terrifying explosions. Small arms fire rattled all around.

The battle lasted past midnight. By then, I had begun to know an admirable man. Castan was a rising star at Look. Then at the zenith of its influence, it was read fortnightly by seven-and-a-half million families. With his proud Roman nose, penetrating brown eyes, and an open, charming way, Sam was a gifted raconteur who made me feel that he’d been everywhere and done everything. Yet he spoke without a trace of arrogance or self-aggrandizement. Low key, humorously self-deprecating, warm yet worldly—I was captivated: I saw in Castan exactly the man that I aspired to become. 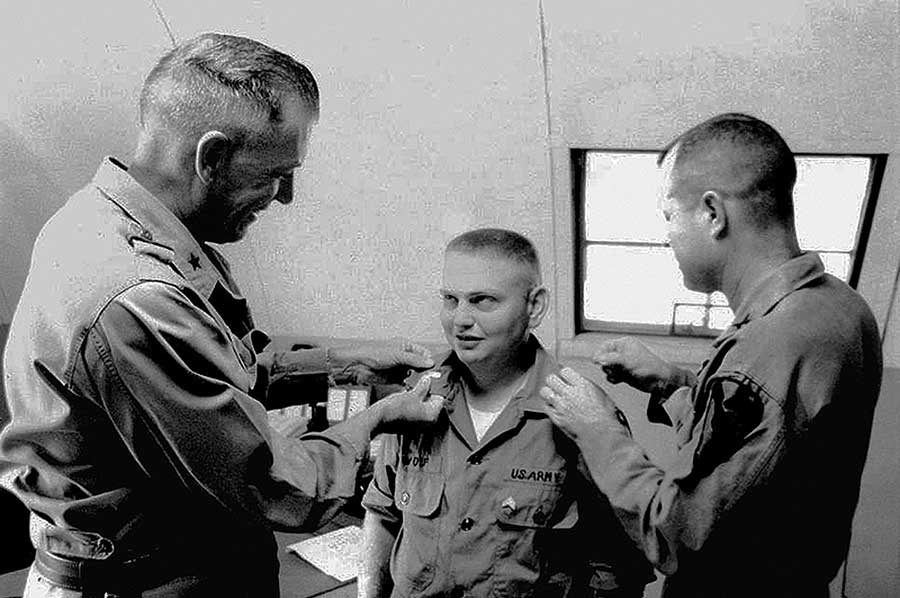 The story that brought him to An Khe was his idea: The effect of a single American death. Some 200 GI coffins left Vietnam each week; the piece would show readers the magnitude of that loss by illuminating the effect of just one death. If someone was killed in action, he would follow this body as it was returned for burial. Along the way, he would interview the deceased’s buddies, family, and friends. While treading perilously close to the macabre, he felt it would provide the personal dimension lacking in dry casualty lists.

Sam had gone on forays with Vietnamese units advised by U.S. Special Forces, but this evening’s attack was his first time under fire.

In the morning, I went to the Division tactical operations center, where a noncom suggested that Castan join Operation Crazy Horse, a search-and-destroy kicking off the next day.

Paul’s unit was part of Crazy Horse.  I made arrangements to escort Castan with Charlie Company, but my boss vetoed that and gave me another task.

I introduced him to Charlie Company’s top kick—first sergeant—and hung out with Paul for a few minutes. That night I wrote Marie, assuring her again that her husband was in good health.

The monsoon continued as I called the Division TOC. The sergeant who answered knew me; even so, I merely asked about a mortar platoon that had been overrun, with 19 KIA. Could he tell me anything?

“News to me,” said the noncom. “If it happened, it hasn’t been reported.” I put down the phone, accepting that I had been dreaming–it was just too weird, too absurd that I could have heard radio traffic on a telephone. Worried about Sam and Paul, my mind had played a trick on me. Exhausted, I lay down and slipped into deep, dreamless sleep.

I was awakened by a sergeant with a New England accent calling from the morgue. He had an unidentified body that might be a civilian. “Any newsmen you can’t account for?” he asked.

The tent reeled. I fought for breath. Castan was the only reporter I knew was with one of our units.

The sergeant asked me to send someone to identify the body. I jammed on my boots, pulled a poncho over my head, and ran through the rain to pound on the door of my boss’s hooch. I said the morgue needed to identify the body of a civilian, maybe Castan.

“I met him for two minutes,” he replied. “You spent hours with him. This one’s yours.”

The morgue was a mile away; my dread grew with every step. From time to time, I tilted my face skyward and let the hard rain wash away my tears. 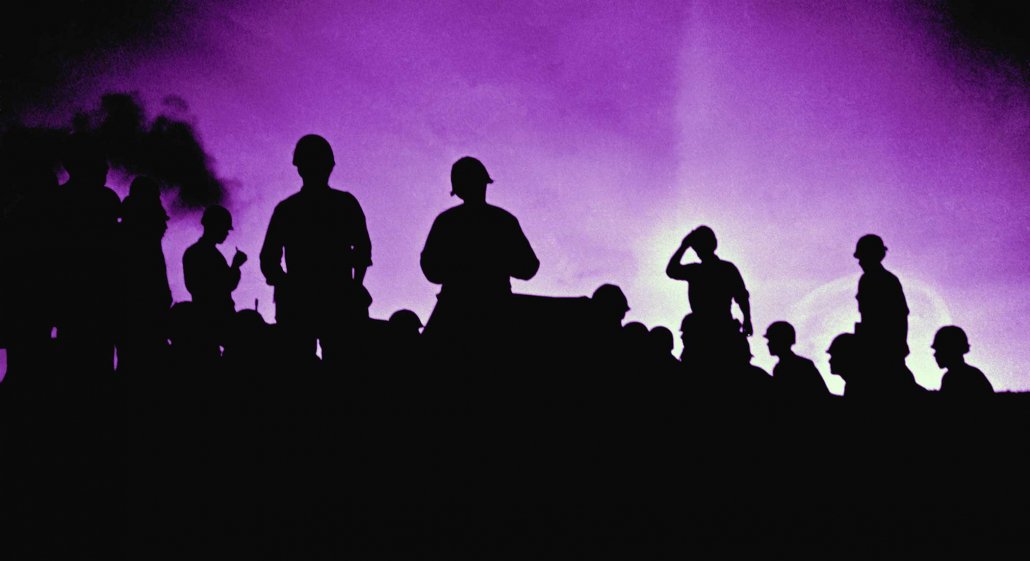 Soldiers with C Co. 1/12th Cavalry Regiment prepare to deploy near Bong Son, in Vietnam, in 1966. Photo courtesy of the author.

At the morgue, I entered a tiny chamber. A pale GI stepped out of the rain—a familiar face: Charlie Company’s mail clerk.

“What are you doing here?” I asked.

“I’m the only one who knows everybody in Charlie,” he said, voice cracking. He turned away, hiding his face, shaking uncontrollably.

A staff sergeant shook the contents of a plastic bag into his hand. “Recognize any of this?” he said.

There were Hong Kong coins, keys, a folding knife, and a Zippo lighter. One side was engraved with the Look magazine logo, the other with the initials S.C.

I tasted bile. “Might be Sam Castan’s lighter,” I said, trembling.

I followed him down a dim canvas corridor to a cluttered chamber filled with wooden tables laid end to end. Naked bulbs dangled from overhead cords. On each table lay a body bag. The noncom paused, consulted a manila tag on the zipper, then glanced at me. When I nodded, he opened the bag halfway and stepped back. Somebody moved in behind me to clean up another body. Squinting, I hunched forward.

I was empty, spent, unutterably weary. ­Why did he have to die? Why Sam? What a waste,­ I thought. I tried to pull myself together. “That’s Sam Castan of Look magazine,” I said. The sergeant rolled the body over.

“One shot, side of the head,” he said. “Look how his hair’s singed around the wound. Powder burn.” 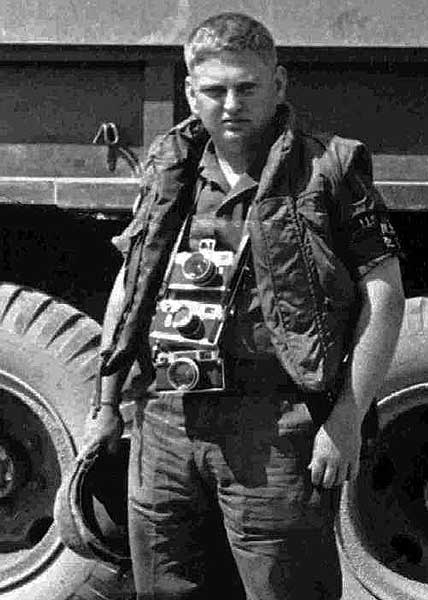 Marvin J. Wolf In Vietnam. Photo courtesy of the author.

I could think of nothing to say.

“Need you to sign the death certificate,” he said.

“Sure,” I croaked. As we turned to leave, a technician stepped aside to let us pass. I glanced at a pale, nude body on the table.

Paul’s face was unmarked and strangely peaceful. Six or seven gruesome wounds marred his chest, limbs, and abdomen. His body was stiffening into a grotesque pose. A sergeant put two pieces of paper in front of me, and I signed them. I don’t remember the walk back to PIO or telling the major what had happened to Sam.

Memories of Sam’s death haunted me for decades. He left a wife, Frances, and an infant daughter, Jane. I found Jane in the Manhattan telephone book and, 31 years after Sam died, found the courage to call. I told Jane why I wanted to speak with her mother.

A couple of years later, face-to-face, I asked Frances to forgive me for sending him to his death.

“There is nothing to forgive,” she said. “You couldn’t know what would happen and you only were trying to help Sam.” A great burden lifted from my soul.

Researching radio phenomena, I learned how it was possible to hear nearby radio signals on a telephone in wet weather. I will never understand, however, how, at precisely the moment when a pilot told the tower that he was bringing Paul and Sam’s bodies back to An Khe, a single chirp from my telephone summoned me to listen.

Service, Sexuality, and Stereotypes Of A Female Veteran
After the “Witch Hunt” of “Don’t Ask, Don’t Tell,” a Decade of ...

How the Marine Corps Struck Gold in a Trash Heap During the Defense Department’s...
Scroll to top