As a combat advisor in Afghanistan, I learned countless lessons while deployed, and mostly by screwing things up. One of the most significant involved the role formal authority plays—or doesn’t play—in times of crisis. Specifically, in the leadership vacuum of a bad situation, initiative trumps authority. While I’ve seen the truth of this lesson in multiple environments, both in and out of the military, my time in Afghanistan drove it home. And as the world copes with the effects of Covid-19, I have found myself reflecting frequently on this truth.

Far from the daily gunfights and ubiquitous improvised explosive devices faced by so many troops during America’s seemingly endless Afghan tenure, my deployment remained relatively docile. Tasked with defending Bagram Airfield, the largest air base in Afghanistan, my unit had a fairly “country club” deployment. Case in point: While I love a good cup of coffee, having a Green Beans Coffee a couple hundred yards away from us in the middle of a combat zone was surreal, to say the least. Bottom line, we had plenty of amenities inside the wire, and plenty of air support outside the wire. But threats remained, regardless of the comforts inherent to a base of Bagram’s size.

Fittingly, the anniversary of Pearl Harbor, Dec 7, 2014, saw one of these recurring threats rear its head. Shortly after sunset, the counter-rocket, -artillery, and -mortar system ripped into action, firing thousands of projectiles into the night sky to deflect an incoming rocket. Inside our combat operations center, we monitored the Georgian soldiers we were advising as they responded to the impact, quickly learning that the round had exploded near a laundry facility on the far side of base. Initial reports: multiple casualties. 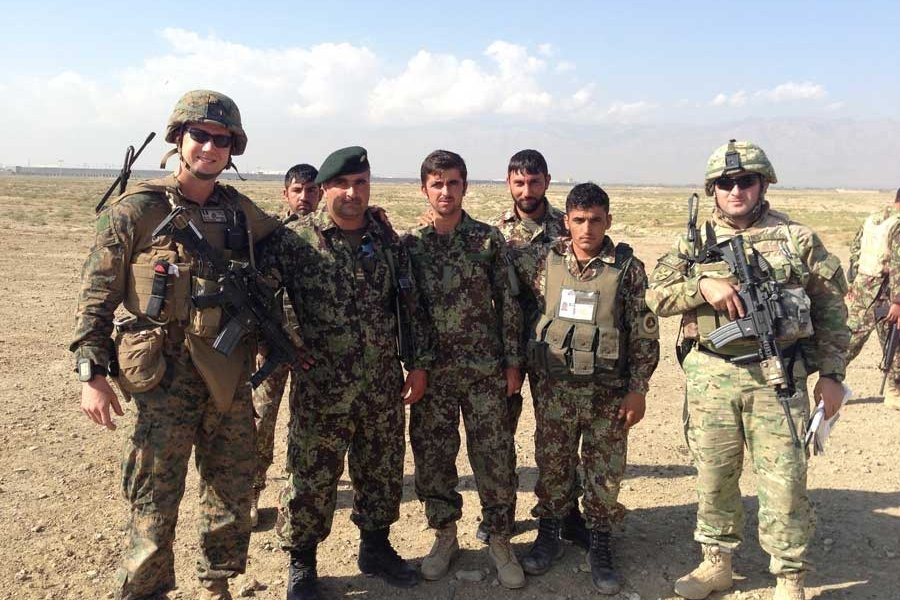 Naylon (left) with Afghan and Georgian soldiers prior to a combined patrol in Afghanistan, 2014. Photo courtesy of Maurice Naylon

Over the next hour, I monitored the situation from our combat operations center. As our team’s operations officer, I spent 90% of my time focused on planning and conducting combat operations outside of the confines of base, with the other 10% supervising our security responsibilities within the base. As such, this night found me planning a future operation in my office when the rocket struck. In theory, my efforts outside the wire would limit the number of rockets actually hitting base inside the wire. But this was a night when reality shattered the theory of my personal role, leaving us with a mass casualty situation. In other words, the base hospital was about to be dealing with more urgent casualties than it was designed to handle.

Though cliché, there’s a reason the phrase “fog of war” exists. In a combat environment, one never has the entire picture. Pieces of the puzzle are always missing. In our combat operations center miles away from the side of base where the rocket struck, we sought to piece together the sporadic radio communications we received to get a sense of what was actually unfolding where the rocket hit. As we gained a clearer picture of what happened, we learned that two of our Marines assigned to the command post on the far side of base had been first responders to the impact site. I would eventually learn the full details of what happened later that night as these Marines recounted their story.

Heading to grab chow, one of our noncommissioned officers heard the “incoming” alert of an impending rocket attack, and he felt the impact of the Chinese-made 107mm rocket shortly thereafter. Running from outside the chow hall to the nearby laundry facility, he saw that the entire roof had collapsed, sending debris and a cloud of dirt into the night sky. After calling his Marine counterpart—another noncommissioned officer—back at the area command post to request assistance, he ran into the collapsed building, tearing through debris and pulling bloodied bodies from the wreckage. 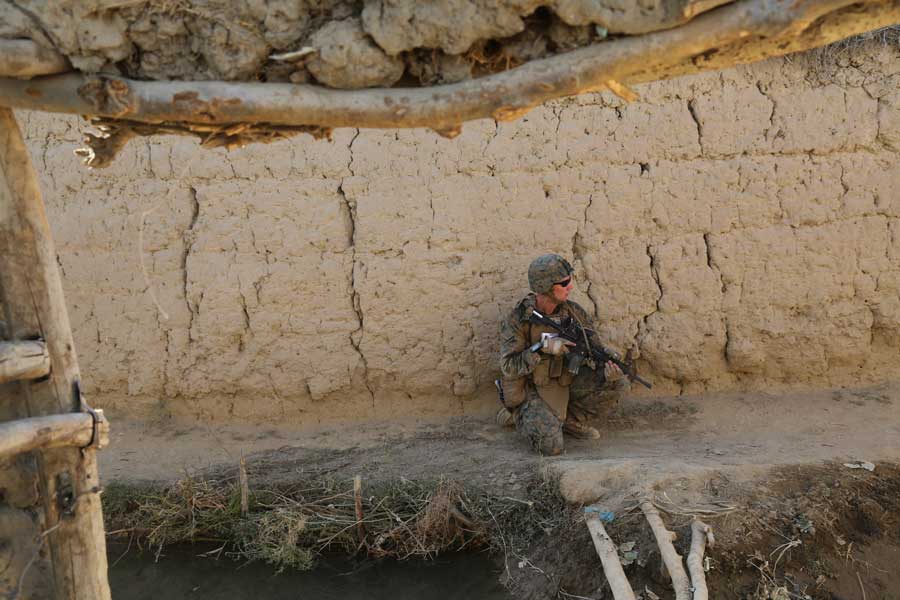 Naylon on an operation in a village outside of Bagram, Afghanistan, 2014. Photo credit: Spc. Jamill Ford for U.S. Army

Doing what Marine noncommissioned officers do, he took control of an awful situation. After pulling multiple people from the charred remains of the building, he coordinated the on-scene response and casualty evacuation procedures, organizing a casualty collection point where the medics could treat the wounded once they arrived. When his fellow noncommissioned officer made it to the laundry facility, the two of them continued to manage the situation, maintaining order, directing the treatment of casualties, and facilitating the link-up with emergency response crews.

Despite the fact that there were now dozens of senior officers and base emergency operations civilians at the impact site—most of whom outranked them—these young Marines remained the de facto leaders on scene, not because of any formal authority, but because they stepped up when things went south. In retrospect, there should have been a better emergency action plan in place for the laundry facility, a high-traffic common area with little to no hardened protection from indirect fire attacks. But there wasn’t. And, in the absence of formal procedures and leadership responsibilities, these Marines filled the void. They entered a situation lacking formal leadership and, through their initiative, established a de facto leadership structure and imposed calm on an otherwise chaotic situation.

Listening to these two Marines recount the events at the laundry facility in my office later that night, I had to fight back tears of pride—one of those odd combinations of exhaustion and emotion that just hit me. These noncommissioned officers weren’t senior leaders, trained special forces, or medics, for that matter—one was a radio operator and the other a vehicle mechanic. But they took charge in an awful situation and made things happen, doing what hard-nosed Marines do, regardless of rank and job title. Though insignificant relative to what they did, writing those Marines up for medals for their actions that night remains one of my proudest accomplishments. 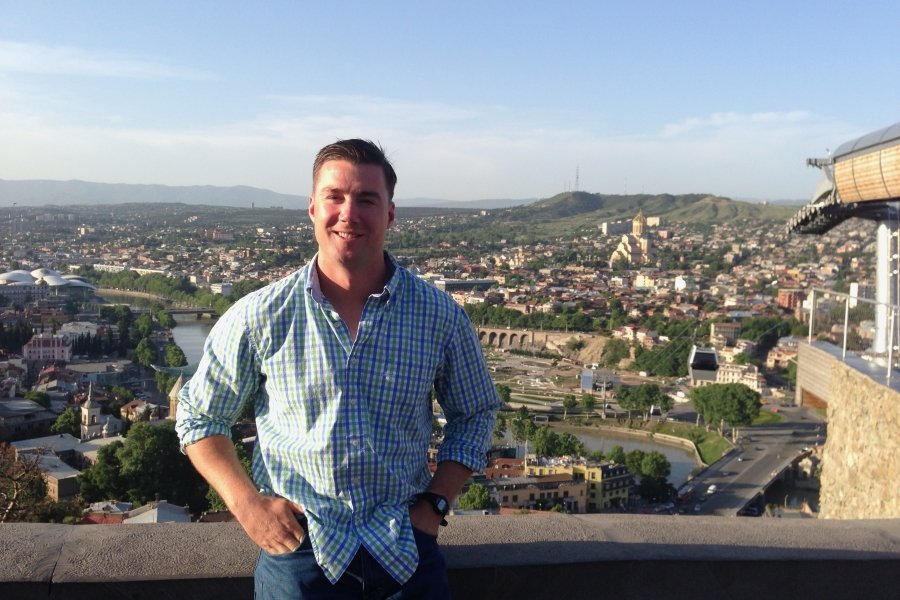 Naylon exploring Tbilisi, Georgia, prior to deploying to Afghanistan with a battalion of soldiers from the Republic of Georgia, 2014. Photo courtesy of Maurice Naylon

It’s a strange phenomenon, but rank and seniority become irrelevant in the initiative vacuum of a chaotic situation. Instead, people look to whoever is willing to take charge. Leaders aren’t always the ones with the most rank on their collars; they’re the ones who step up when no one else will, regardless how dire the situation.

I can’t help but see an analogous situation in America today. While our nation has not faced a literal rocket attack, Covid-19 certainly represents an attack—on our health, our economy, and our way of life in general. In the chaos and uncertainty of this new reality, we are seeing the limits of formal authority. On Bagram, our—my—failures to plan for an emergency situation at that laundry facility led to a situation ripe for chaos. As a leader, I should have prepared for such an awful contingency, but I didn’t. Out of my failure arose the heroic actions of two Marines. Unfortunately, two Afghan contractors died in the attack that night, but these Marines’ actions and courage in “running to the sound of gunfire” saved the lives of several others.

As with my failures as a leader on Bagram, they have been failures in leadership in this pandemic. Fortunately, however, Americans of all stripes are stepping into the breach. From health care professionals, to grocers, to “gig economy” delivery drivers, we are witnessing the positive role of initiative in chaos. In an awful situation, it is not the “rank on the collar” that matters, but the willingness to take charge and lead.

Letters To My Country That She Will Never Read, Part 1
Without Birth Control Help, Marines’ Readiness Suffers