With every step they would watch me, as the suffocating humidity of Louisiana summer drenched me in salty sweat. I’d like to think that they were silently cheering me on, smirking humorously at my idea of “fun”—training for my first marathon.

A fiery red cardinal, the state bird of my beloved Virginia, turns its head in measured ticks as I sprint by. Hi, Grandpa, I smile to myself. A squirrel hesitantly crosses in front of me, pauses, doubting its path, before scampering up a tree. I roll my eyes and snort out a giggle at the same time. Frank, you’re a spaz. I wish you would have just called to talk. In the stagnant air, a whisper of movement from an amber butterfly brushes my forehead before it continues into the ether. Thanks, Aunt Sarah. A great blue heron, critiquing my form, stands motionless. I know, Coach. I know. 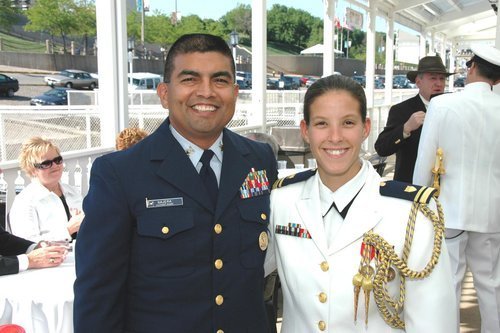 I’d been out of the Coast Guard nearly two years when the deaths began. My shipmates and friends feeling the same inconceivable loss were dispersed around the country. I had moved away to the Big Easy, where I worked in a job representing the industry my former military branch regulates—on the “other side.” Seeing my former shipmates at mutual business meetings dressed in the uniform I’d proudly worn every day for half a decade made the feeling of separation more acute. I attempted to rock my Banana Republic skinny pants and leopard-print flats bought during my latest civilian shopping spree, hoping I would look like I knew what I was doing. I was still adjusting to civilian life when the first person died.

I lived in a constant state of “Who will it be next?” after Aunt Sarah passed away that continued long after I learned about Frank’s suicide. My Pearl Jam ringtone was no longer cool to hear, making me wince like a Q-tip pushed too far in my ear every time someone called. The bold print of a new email from a friend screamed with the possibility of bad news. After weeks of countless phone calls, emails, and text messages, I was emotionally and physically exhausted. I sought refuge away from my devices in my monthly issue of Runner’s World. About a month after the marathon of funerals, I found myself mindlessly snapping through the latest edition. I had been thinking of completing a marathon for the past few years, and I wanted my first to be the Marine Corps Marathon. As with many things in life, I just hadn’t gotten to it. As I turned the magazine’s page and caught sight of the full-page ad for the 34th Marine Corps Marathon, I snatched my hand back to my chest, as though I’d slammed my finger in the kitchen drawer.

“If not now, then when?” a voice in my head demanded. Grandpa had served as a Marine in World War II in the Pacific theater. It was as if he, Frank, Coach, and Aunt Sarah were speaking to me, telling me to focus my energy on a positive challenge instead of my grief. 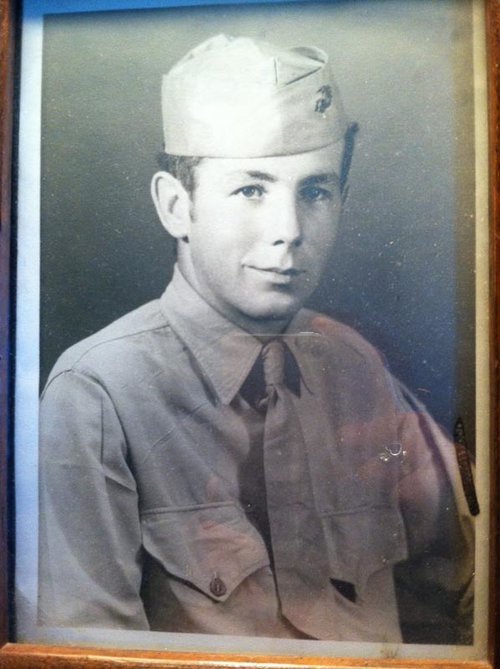 February 5, Grandpa. He taught me some of life’s most important lessons when I was growing up in rural Virginia: patriotism, how to fish, how to drive a tractor with a trailer loaded with firewood, how to shoot the .22 caliber from the front porch at the groundhog eating the vegetable garden. “I just don’t see what you find so fascinating. It was just something I did,” he would say when he would catch me engrossed in looking at the sepia and black-and-white pictures of him and his war buddies, tucked away in a velvety, worn manila envelope in some forgotten cabinet.

March 14, Coach. For a few years at the Coast Guard Academy, I played basketball, which was my first love. My head coach became my mentor, and he and his wife were like second parents. He loved me like a daughter and said that I could do no wrong in his eyes. He was tough on me, because he saw potential and expected my best. “You’re a point guard. You’re just like me. You’re born to struggle,” Coach used to say. It took me years to understand that this was the ultimate compliment. The man who bestowed this praise, whether it was with his arm around my sweaty shoulders after a loss or in an email that reached across thousands of miles to my lonely corporate laptop, died by suicide. I can’t miss the irony on how this shared characteristic was supposed to be one of my strengths, and yet it was his downfall. I wish he could hear me now when I tell him that I’m no longer angry.

March 23, Frank. One of the smartest and craziest people I’ve ever known, he offered me a tequila shot the moment I walked into the apartment he shared with my college boyfriend in Cocoa Beach, Florida, where their ship was stationed. A surfer kid from Los Angeles, Jack and Cokes were his hydration plan of choice; he drove a Harley, listened to Enya endlessly, and enjoyed regular pedicures. The enlisted personnel that worked for him loved and respected him; his commanding officers trusted him implicitly. Being a Coastie was all Frank knew. The last time we spoke, I had just returned from Coach’s funeral. Frank had asked me to help him find an apartment in New Orleans; he was moving back to the city he loved so much. Coach’s suicide was on the tip of my tongue our entire call, but the conversation was jovial and exciting, and I hesitated to tell him my depressing news. It could wait until we were in person. What if I had told Frank during that last conversation? Would it have prevented him from shooting himself in the head five days later? Frank was buried at sea, fitting for a career sailor. 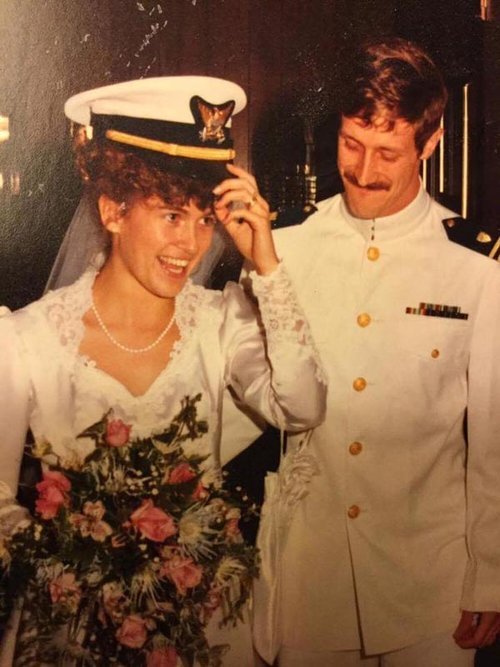 The author’s aunt and uncle, Mike and Sarah, on their wedding day, 1985. Courtesy of Sarah Holzhalb

March 24, Aunt Sarah. The loving wife of my Coastie Uncle Mike, she was stunningly beautiful, ridiculously intelligent, fiercely independent; she loved her husband, their two kids, and family more than anything. During my two years deployed at sea, she sent me numerous care packages with my favorite snacks. When my ship returned to its Boston home, docking right next to its sister ship, which my uncle had served on, they came from their home in Pennsylvania to visit their favorite city and to treat me dinner in Little Italy. She never let anything get in the way of what she wanted to accomplish, including the advanced ovarian cancer she fought while remaining at the top of the inaugural class of Drexel University School of Law. Her degree was posthumously awarded. There’s a perseverance award named after her—for a damned good reason—granted to one student who shows commitment and grit through adversity.

Four deaths in a little over a month; three in 10 days; two of those by suicide. I dread turning the calendar page at February’s end. The month of March still sucks. Such a simple transition from one day to the next weighs heavy, like a pile of wet towels I carry alone. There are moments I forget they’re all dead. Like when the light awakens me and I open my eyes to greet a new day. Then my brain catches up, and I remember they’re gone. I still have the urge to call them when it randomly occurs to me that I haven’t heard their voices in a while. It’s been years since I’ve talked with them, in the flesh at least. My mind still spirals with questions and prayers for answers, but sends nothing in return.

I found some relief in running, and every step of training for the Marine Corps Marathon was therapeutic. I welcomed the burning pain in my quads as evidence that I was getting stronger, replacing the aching string of obsessive thoughts that got me nowhere. Headphones in, Zeppelin, Brandi Carlile, Peter Gabriel, Depeche Mode, Alice in Chains, Van Halen, Bon Iver, Lionel Richie. Songs specifically chosen to make me cry, nod my head, grit my teeth, as I stubbornly challenged the running gods to bring it on. Bring the pain, I’d think. I can take it, outlast it. The miles rolled on. As the months of training went by, endorphin-induced gratitude for these four people attempted to replace my sadness and disbelief. The ache will never go away. But, like training for the numerous marathons and ultramarathons I have finished since, the discomfort has become familiar, easier to manage.

Learning to Breathe Through the Journey of Addiction and PTSD
“He Tried to Kill Me in His Sleep”—a Military Spouse Learns How...

Unclear All-clear And A Requisite For Air
Scroll to top