I came to Antigua, West Indies, on a lark.

Whispers went around Camp Smith, New York, that something was amiss. Herbie, the cantankerous senior jumpmaster of our unit, walked up to me as I cleaned my weapon after training. The “old geezer” (nobody was older than 45) had all the connections to the fun jumps, always tapping a few LRRPs to come. That’s what we called the guys on the long-range reconnaissance patrols. 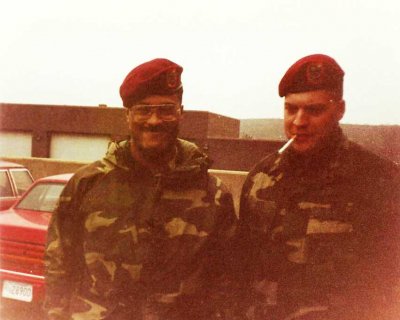 Mo-airborne: Maurice Valentine, left, and a teammate in their airborne berets. Photo courtesy of the author.

He glided over to me.

“Wanna go to the Caribbean?” he said. “I can get you some water jumps in Antigua.”

He gave me a sly look. “Have you [had your first jump], Valentine?” He used a euphemism, of course.

I smiled sheepishly. “No.”

Herbie laughed out loud, “Well, gooooolllllleeeee! Gimme 20 pushups for just being a [newbie].”

I had already earned my blood wings out of Airborne School. I bled profusely and was sure I was going to get tetanus.

But I hadn’t had my first jump out of school.

I knew that if I let it be known I was A) going to Antigua and B) going to have my first jump, I’d be in big trouble. I didn’t care to sweat in the parking lot doing jumping jacks and burpees until I dropped.

READ MORE
Less Than a Year After 9/11, She Fell in Love With a Marine

So, I kept my mouth shut.

One week later I was on an empty C-130 flying out of Dover Air Force Base with two other long-range reconnaissance patrol soldiers, making a quick stop on the military side of Dulles International Airport.

More guys boarded. They wore different fatigues from us—unlike anything issued in America. 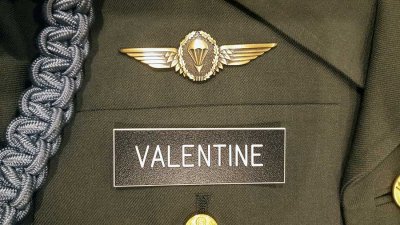 Then I noticed a black, yellow, and red tricolor on the right shoulder of their blouses. I knew exactly what that meant: Germany.

And I knew exactly who they were: The German paratroopers, and they brought loads of beer, food, and parachutes as they boarded.

Sgt. Richter, one of the old warriors of my unit, was as shocked as I was. “I thought this was going to be a normal Airborne operation.” He gave me a toothy grin. “Feel like getting some German wings with your [first] jump, Valentine?”

There was a lump in my throat. “Do you really think I can?”

“As long as you jump with them. Not bad for a [first-timer]. Just don’t let everyone else know that!”

We took off again in the lumbering Hercules. The platoon of Germans were quite talkative and friendly. One of them told us they had been training in Virginia, got word of the jump, and their commander got them slots. 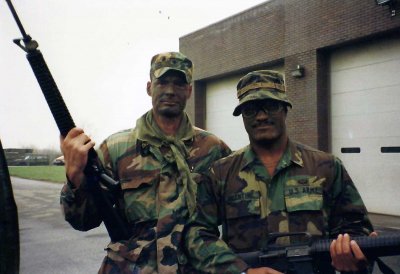 Spc. Maurice Valentine, right, poses with a teammate. Photo courtesy of the author.

A sore ass and hours later, we hit the ground again with a thunk, vibrating like crazy. We were in Antigua. I craned my head to look out the small port window: rolling tarmac, palm trees, and lots of military planes mixed with civilian ones. Then I saw a sign not too far off in the distance. Welcome to Bermuda.

I leaned over to Sgt. Richter. “We’re in Bermuda. What for?”

“Beats me. Maybe we need gas.”

An athletically built blond guy with a chiseled face sat not too far from me. His T-shirt had a small gold decal of an eagle holding a trident and a revolutionary pistol. Beneath it were the words “SEAL Team Two.”

I jabbed Cpl. Miles sitting across from me like I had just seen a superstar. “Yo, Miles,” I whispered. “We got SEALs on board!”

“Looks like this is going to be some helluva training mission.”

Herbie, hanging in the cockpit with the crew chief, came over. “Hey, Herbie, Germans, SEALS, who’s next?”

He gave me a wink. “JSOC. This jump is with them.”

“That’s why I had to be sneaky,” Herbie added. “If everyone knew that JSOC was going, everyone would’ve wanted to go.

“You should feel lucky, Valentine,” he said. “And this is your [first jump]? Gimme 20.” I laughed, and jumped up on some seats to knock out the pushups.

I just hoped nobody else saw.

The flight to Antigua was long. I wondered who else would be at this jump fest. The PJs? Combat Control? Rangers? This was going to be very elite, indeed.

My answers came when the doors opened up once again. A warm breeze blew into the aircraft as the engines shut down. We disembarked with the stars out brightly that night. The place looked heavenly. Several birds from Fort Bragg, North Carolina, and other parts of America surrounded us. A few soldiers gravitated to us, greeting Herbie as if he were an old friend.

I looked at the patches on the uniforms surrounding me, and most were members of JSOC, with a couple of 82nd Airborne thrown into the mix. It was awe-inspiring to be among them.

After an hour, we sat in a Navy office for our in-country briefing. The officer there briefed us about what to see during our off hours. I was excited, this trip being my first outside of the United States.

The young officer quieted us all down as he began. 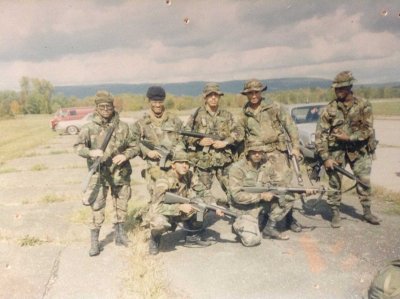 Maurice Valentine, second from left, poses with the members of his long-range reconnaissance team. Photo courtesy of Louis Cespedes.

“Welcome to Antigua,” he said, bored. “For those of you who don’t know, Antigua is the largest island of the Leeward Chain, with Barbuda, not too far from here, being the smaller. …”

He warned us about the local transportation of Antigua, which was notoriously slow. It ran on that “Caribbean Time,” and you couldn’t count on it if you had to get anywhere in a hurry. Renting a car from the airport was the only way to go.

And of Barbuda, he said, “It’s very expensive. If you watch Lifestyles of the Rich and Famous, you’d know the people living there don’t want to see you. Don’t go.”

But the beaches? They were everywhere. Our barracks had one of the best beaches on the island, too. All we had to do was walk out the door, grab a towel, and stretch out to watch all the jumping.

“So who’s the [new guy]?” a Green Beret named Stan said as the plane we were going to jump out of banked hard. He was a big African American soldier, at least six-foot-four. He sat on one knee maintaining his balance in all the turbulence from the open cargo door. He had a large tattoo that said “De Oppresso Liber” on a muscular arm. He wore a gray free-fall parachute on his back as he hung on the edge of the ramp, looking down into the ocean. I was amazed he didn’t get sucked out.

He smirked. “You know how lucky you are, right? It’s Valentine’s Day, your last name is Valentine, this is your [first] jump, and you’re getting German jump wings?” He shook his head.

I grinned, happy to have been lucky enough to escape being dogged by everyone.

Miles stood in front of me. I looked over his shoulder out the gaping cargo door. Nothing but a huge beautiful blue expanse.

The German gave Miles the signals. The jump light inside the aircraft went from red to green, and within moments he had a “Go!” and was gone.

Seconds later I saw him. His chute opened with no problems and he gently turned out of the slipstream to enjoy the ride down.

Then it was my turn. I walked quickly toward the Jumpmaster, he immediately said, “Go!” and I stepped off the ramp.

My first thought? Damn, I’m a bit high up in the air. …  With my eyes open, the world whirled around me as my body position kept me straight in the air, like a bomb falling vertically from the sky. I felt the tug of the static line attached to my parachute as my canopy deployed, the risers slapping me hard in the face.

I made a 180-degree turn into the wind to slow my descent. But I wasn’t slowing down. I was speeding up. The winds pulled me backward as I descended, and I immediately worried that I would drown.

There was nothing I could do but ride it out. Down below, I saw the Navy SEALs’ rigid boat make a beeline for me, popping up and down on the choppy surf.

As I got closer to the water, I pulled my floatation vest and began to estimate my distance. I loosened my harness, unclipping the chest strap.

I tightened my body as I looked down. I could see my shadow grow in the water. 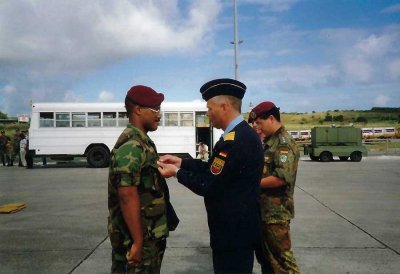 Maurice Valentine receives his German airborne wings after his first jump out of school. Photo courtesy of the author.

My canopy fell behind me and I surfaced. I put my hands behind my head and lay on the surface waiting for the boat to come get me. I saw the C-130 fly over once again to let out some more jumpers.

The SEALs’ boat drove up. Miles and a few of the German paratroopers were inside, dripping wet.

“Yo, Valentine, whatta [first jump]! You now have some German wings!”

One of the SEALs laughed. “Hey, how does it feel? Better than sex?”