(Editor’s note: T.L.K. is a pseudonym for a national guardsman whose identity is being withheld to protect the soldier from retaliation. T.L.K.’s service and presence at the Capitol has been verified through photographs and military records.)

Ask a newly arrived visitor about the dress code in Washington, D.C., and the answer will almost certainly be suits, ties, blouses, and skirts, intermixed with some form of fitness clothes.

Rarely would “camouflage and armor” be the visitor’s answer.

But if the visitor had come last summer, he or she would have noted the contrast of camouflage against the sleek glass buildings of downtown Washington, as well as the deep guttural purr of boxy tan trucks that might have seemed more appropriate in the deserts of the Middle East than on the paved roads that led to the White House. Last summer, the trucks and the troops inside them were said to have greatly intimidated the city’s civic-minded citizens, who thought the military’s “optics” were a better fit for Pyongyang than for the temple of the world’s leading democracy. 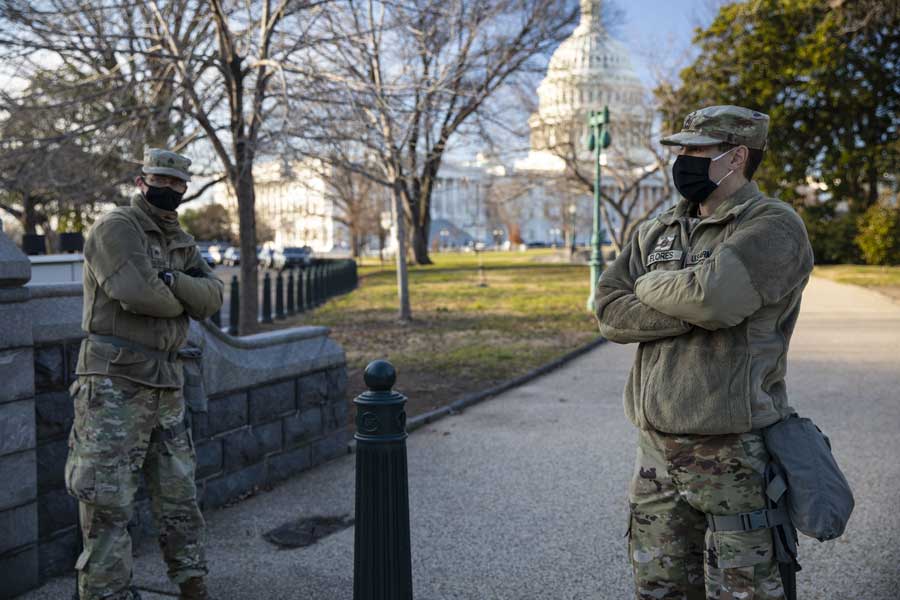 Soldiers with the District of Columbia National Guard stand in front of the Capitol in Washington, D.C., Jan. 7. Photo by Staff Sgt. Erica Jaros, courtesy of the U.S. National Guard.

So on Jan. 6, when the force behind democracy became necessary—as did the need to tone down the show of force after the menacing use of tear gas and rubber bullets to raise a Bible, as well as the low-flying helicopters used to force people to go home—the camouflage became invisible to the casual observer. One had to look closely to see the citizen-soldiers. Instead of the loud trucks and their loud purr, the nation’s security sat tucked inside quiet minivans and bland SUVs. They still wore camo and armor, and they remained alert to the moving flow of traffic and listened intently on their radios for any sign of trouble.

READ MORE
Falling out of love with war: It could never live up to my expectations.

Occasionally, they got out of their vehicles to calm angry and lost tourists, hypnotized by conspiracies, as they searched for the big white building with a pointy dome up top. Turns out, navigating a city’s half-closed roads frustrates visitors.

We were told on the evening of Jan. 5 to report to the Armory at five the next morning. We went, and—after unmarked vehicles were assigned, teammates selected, briefs given, and radios checked out—we fanned out to our sectors across the city. My team’s sector was within sight of the Ellipse, where the “Stop the Steal” rally was to be held. So by the time we arrived at 7 a.m., we could already see large crowds and hear their carnival chants. 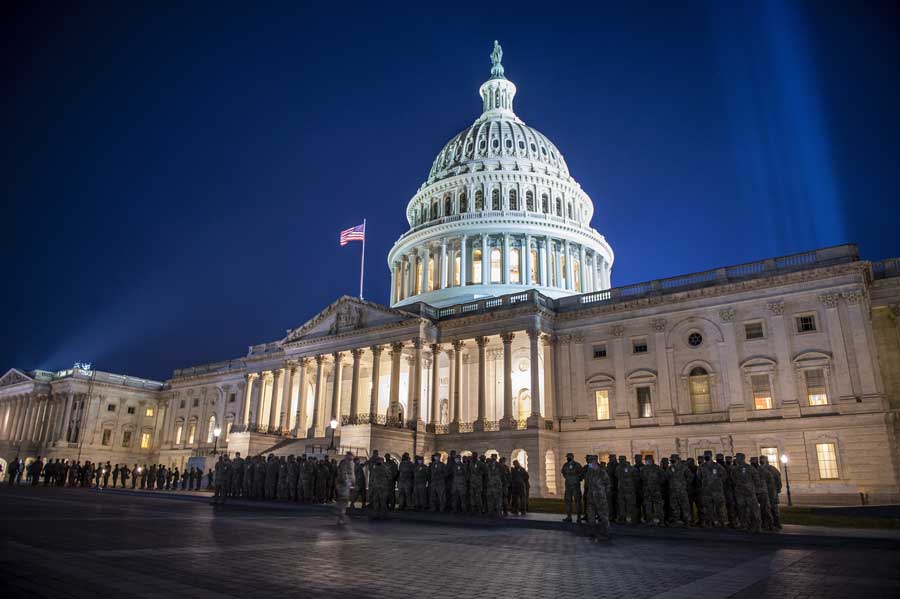 U.S. Soldiers with the Oklahoma National Guard stand in formation outside the U.S. Capitol Building, before beginning their assigned guard duties along the perimeter to the Capitol on Jan. 20. At least 25,000 National Guard men and women supported federal and District police leading up to and through the 59th Presidential Inauguration. Photo by Sgt. Anthony Jones, courtesy of U.S. Army National Guard.

Never in these streets had red been a mandatory uniform. Nearly everyone we saw wore it, and those who didn’t wore camouflage or varying shades of black. The crowds also brought so many flags that they might have been going to a flag-waving festival—with red, obviously, being the primary color of choice. We saw an occasional deviant flag of blue or a yellow flag plastered with a coiled snake, as well as the random flags of random countries that befuddled anyone who tried to assess what they might mean.

The speech would start at 11 a.m., but the crowds quickly revealed how eager they were to hear it: They began their walk to the venue at seven. 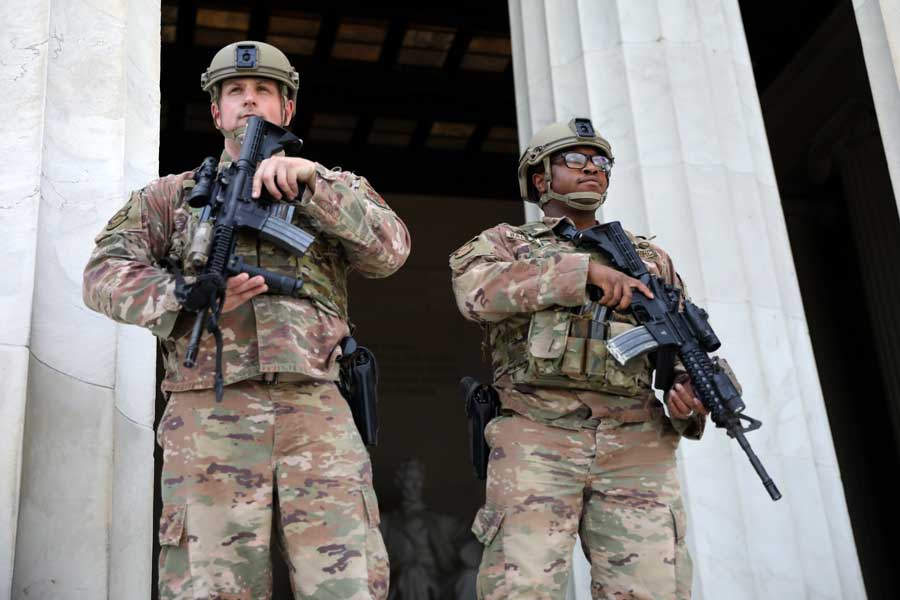 District of Columbia National Guard airmen stand guard at the Lincoln Memorial on June 2, in Washington, D.C. Airmen from the D.C. National Guard were deployed in response to protests and riots after the death of George Floyd. Photo by Kevin Valentine, courtesy of the U.S. Army.

Down the street they streamed, generally passing us without noticing us, but a few of them realized they were being watched. If we had brought our loud tan trucks, perhaps people in the crowds might have stopped to say hello? Who knew that a gray minivan could be so stealthy? Rarely did anyone bother to look closer, and those who noticed pretended they didn’t see what they thought they saw: stern-looking soldiers commandeering a soccer mom’s minivan, occasionally stepping outside for a cigarette break.

When the president’s speech began, we listened on our phones, and then dismissed it as the same bombast we’d heard for four years. It wasn’t until the speech ended at an hour past noon that the first indication of trouble appeared.

“There’s a large crowd on 15th and Penn, heading east.”

Moments later, Metropolitan Police across the city began to flash their lights and scream their sirens as they raced toward the big white building with a pointy dome up top. The crowds, now hypnotized by what we had taken as just the day’s typical bombast, sprawled out from the Ellipse in every direction. Many walked with a possessed sense of purpose—eager to stop an imaginary theft from occurring. Others appeared to be lost and strolled dumbfounded on the city’s roads, many of which were closed. 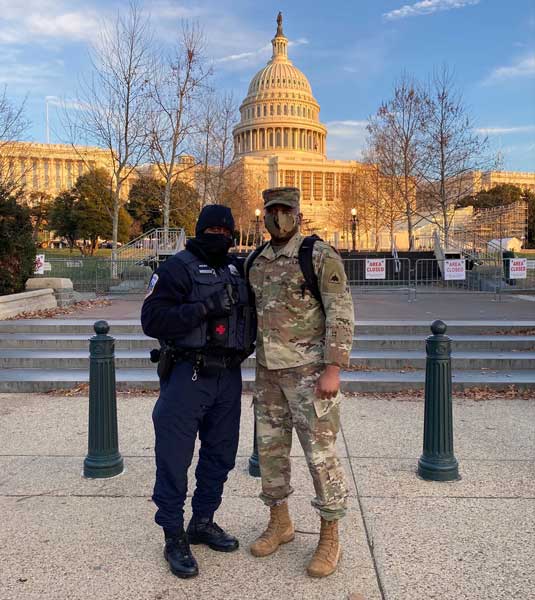 We saw people in ridiculous costumes. It was like Comic-Con intermixed with a MAGA rally. We laughed at the woman wearing a life-size costume of Donald Trump straddling her back, with his hands suggestively on her hips. And we couldn’t help but make fun of an absurd reveler’s full military kit, whose convincing gadgetry would have indicated a Navy SEAL—if it weren’t for a missing rifle, a limping gait, and terrible boots, as well as his soft eyes that revealed he had never hurt a fly.

It was now 1:30 p.m, and the radio began to squawk with a constant buzz: There were reports of where the crowds went. Reports of suspicious men with suspicious intentions. Reports of suspicious packages. Report after report after report, followed by suspicion after suspicion after suspicion. We became alarmed as we watched livestreams of the Capitol’s siege on our phones—filmed by amateur videographers turned real-time historians. It was then that we began to suspect that a long night was ahead.

Our team included highly experienced staff sergeants who’d done almost every kind of civil support mission asked by the D.C. Guard. They were in charge of the unseasoned soldiers who were experiencing this type of mission for the first time. We started to get calls from concerned relatives watching the events on TV, asking us if we were going to be OK. We laughed and told them we were not in the Capitol. Shortly after these assurances, the task force commander’s voice blared from the radio, telling us that the day would be much different from what we had planned. 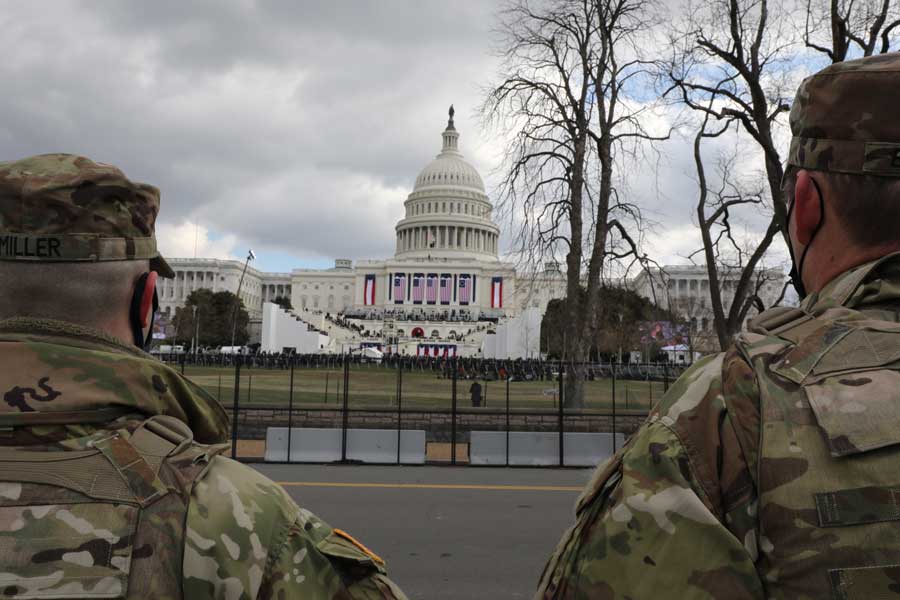 “All units are to stay in place until further notice. …  The mission has changed to civil disturbance. … Those who were going to relieve you will be going to the Capitol, over.”

“Good copy … Staying in place, over.”

The second indication of a situation about to take a plunge into chaos came when we watched on our phones as several members of the crowds jostled with police over metal barricades. Gustave Le Bon’s mob theory was live in action. Everyone gradually lost his or her grip on independent action. The crowd now formed a collective mind where individual rage turned into collective rage. And it was at that moment that we saw the world’s city on a hill stare into the abyss once more.

On our phones, we watched the waist-high barriers collapse within seconds. The rioters were now inside the perimeter, and in came danger. Each of us watched what we thought to be the most shocking video. One of us drew attention to rioters spraying police with mace, only for another to point to a video on his phone showing windows being smashed, and then another showing a frenzied crowd clobbering police on the Capitol’s monumental steps. Rioters had stripped the flags from their poles and turned them into weapons of war. It was then that we understood why we’d seen so many flags that morning: The flags and poles had hidden in plain sight as they traveled across town for battle.

It was the video of a woman getting shot from point-blank range that made us realize just how close we were to history, yet how far removed we were from shaping it. 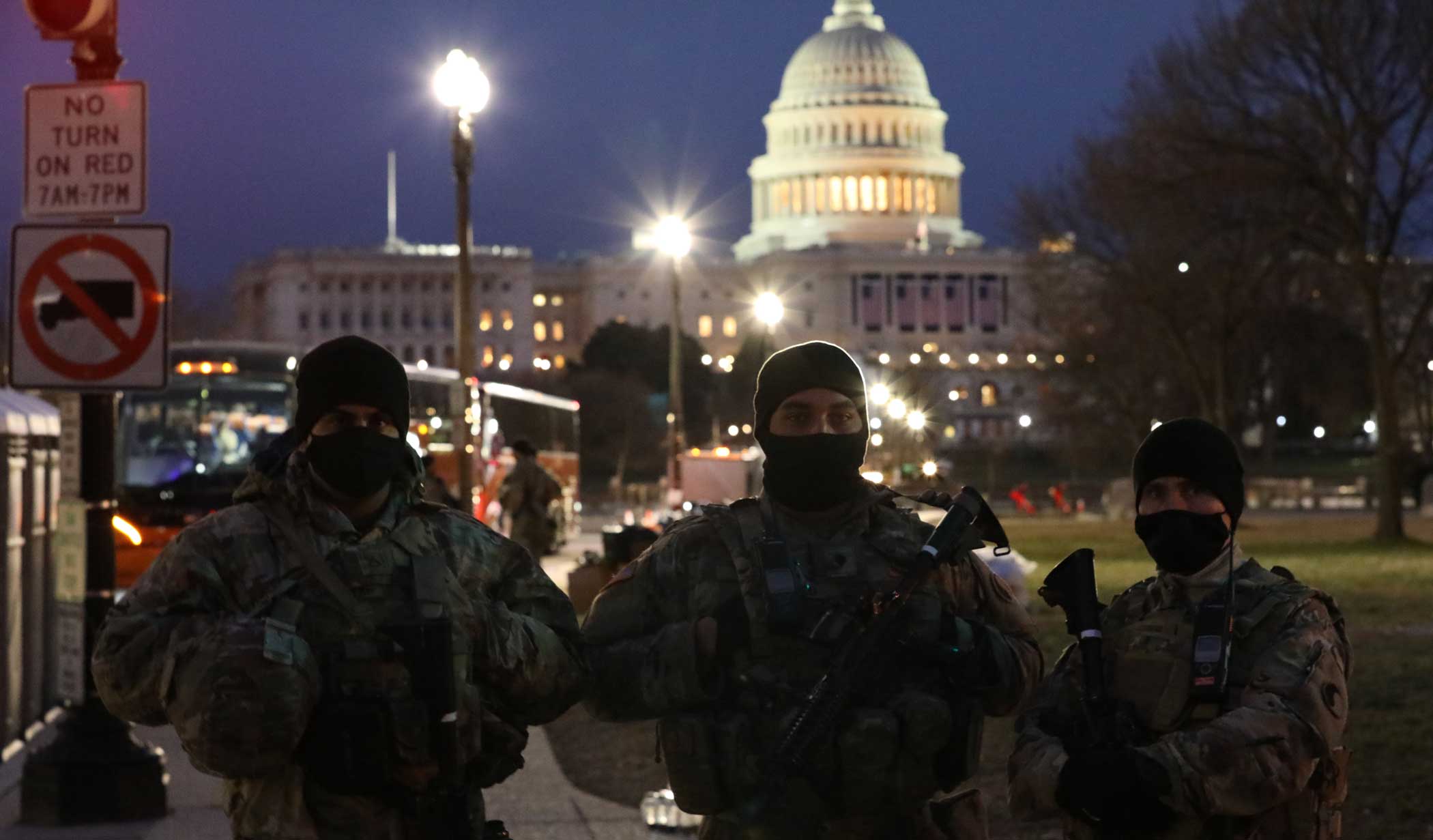 Weren’t we in a unit called the Capital Guardians? We had riot gear in our cars. We had Metropolitan Police in front who could have escorted us to the Capitol. But all we were allowed to do, our original mission, was “stay in place” and watch the traffic. We even saw police from another state speed toward the action that we could experience only from our iPhones.

We sat in our unmarked cars because of last summer. Last summer we guarded the city’s monuments with an intimidating presence. And the public hadn’t liked it at all. They went berserk after watching helicopters hover over crowds in an attempt to disperse them, as armored guardsmen stood still protecting Washington’s monuments. The military was later criticized about the “optics,” which then made the leaders up high so cautious that when a similar—but far deadlier—situation arose that January afternoon, they told us to do nothing more than watch traffic.

The irony wasn’t lost on us as the Capitol was besieged, and the very same critics frantically asked where the very same soldiers were who flew helicopters above the crowds and stood guard over the monuments. Where were they? And why were they missing in action?

Where we were was far outside the Capitol: near Farragut Square and Franklin Park, on metro stations and quiet sidewalks, on the roads far away from history—sitting, standing, and watching traffic.