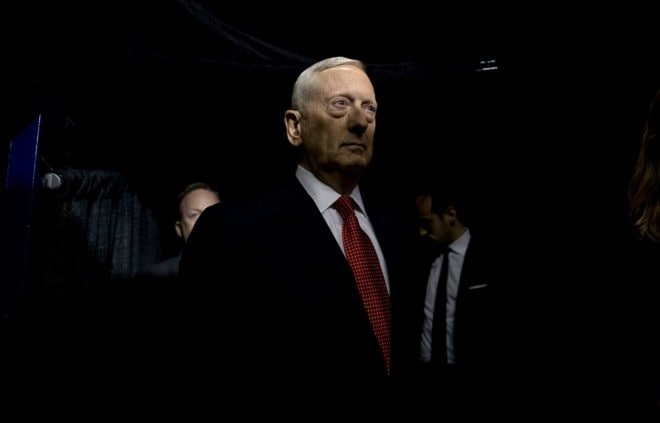 Defense Secretary James Mattis rebuked Marines involved in sharing nude photos of fellow servicewomen in a statement to the Military Times on Friday. And the Senate Armed Services Committee has announced it will open an investigation next week into the nonconsensual collection and distribution of inappropriate images.

“The purported actions of civilian and military personnel on social media websites, including some associated with the Marines United group and possibly others, represent egregious violations of the fundamental values we uphold at the Department of Defense,” said Mattis, who, the Military Times reported, will meet with civilian and military leaders in the coming days to address the scandal.

The strong response came less than a week after Reveal and The War Horse broke the news that some members of the closed Facebook group Marines United were collecting and distributing images of female Marines and veterans, accompanied by lewd and sometimes violent content. The Google Drive on which the images were stored was taken down in late January, and the original poster was kicked off Facebook and fired from his job.

The Defense Department started a criminal investigation based on the reporting. The story’s publication last Saturday set off a media storm, with coverage around the world. Journalist Thomas James Brennan, who broke the story, spoke with the “Today” show, as well as the CBS Evening News, CBS’ “This Morning,” CNN, ABC’s “World News Tonight” and The New York Times.

Events since then have underscored the difficulty of shutting down such social media activity.

The Google Drive of images linked to from the Facebook page was taken down after Brennan notified the Defense Department of its existence in late January, and the post containing the link to the drive was stricken from Facebook. However, soon after, a Marine at Camp Lejeune was stalked as she picked up her gear, and photos of her, with comments encouraging that she be raped, were posted on Marines United.

The Naval Criminal Investigative Service has requested that service members report to the investigatory body any incidents of sexual abuse or misconduct. The Marines United Facebook group, originally founded to help address and provide support for Marines considering suicide, was shut down after the story broke. Soon after, Marines United 2.0 launched.

Sen. Kirsten Gillibrand, D-N.Y., a member of the Senate Armed Services Committee, sent a letter Wednesday to the committee’s leaders asking for a session on photo collection and distribution of photos without consent, according to The Hill. The committee is set to meet Tuesday. Members will hear testimony from U.S. Marine Corps Commandant Gen. Robert Neller at 10 a.m. ET.

On Thursday, Rep. Jackie Speier, D-Calif., testified on the House floor, calling for Mattis to take immediate action and remove all Marines involved.

“This is not about sex or fun or ‘boys will be boys,’ ” Speier said. “This is about the Marines deliberately trying to degrade, humiliate and threaten fellow Marines. They encouraged stalking, distributed stolen intimate photos and reduced their comrades to a collection of body parts.”

The day after Reveal published the story, Brennan and his family began receiving death threats. His wife received rape threats. They were forced to leave their home.

Alleged victims of the nude photo-sharing effort have made statements to the press – both for print pieces and on television and video. Marine Lance Cpl. Marisa Woytek spoke with the “Today” show on the condition that her face not be shown.

A group of female Marines also created the Facebook page Not In My Marine Corps in response, inviting others to share their stories of sexual assault and harassment in the Corps and to engage in advocacy and prevention efforts.

“It has been laughed off by military leadership and members as harmless, expected, or invited,” the group’s press release says. “This behavior is not harmless and we demand an end to it.”

Neller condemned the online behavior in a video released last week by the Corps, slamming Marines involved in the scandal.

“We are all in 24/7, and if that commitment to your excellence interferes with your ‘me time,’ or if you can’t or are unwilling to commit to contributing 100 percent to our country’s war-fighting ability by being a good teammate and improving cohesion and trust, then I have to ask you, do you really want to be a Marine?”

Neller called for a culture change within the Corps and for Marines to step up and protect and support their fellow servicemen and women.

“For our NCOs (noncommissioned officers) and staff NCOs, I expect that you will support all Marines who report behavior that is prejudicial to good order and discipline, including conduct that is degrading to Marines,” he said. “Ensure they are protected from any form of retaliation, and do all in your power to prevent harassment or abuse of any Marine or sailor.”