“We have a special prayer request,” the pastor announced. “One of our attendees, Gina, is deploying to Afghanistan. Let’s lift her up.”

I bowed my head and wondered who she was. I hadn’t realized any other women in this church also served in the military. I had served in the National Guard, and as a newcomer to this particular congregation, I hadn’t yet met any other women with whom I felt comfortable. While the pastor prayed aloud, I found myself thinking about how Gina was feeling as she prepared to deploy, wishing I could meet her before she left to offer some encouragement. 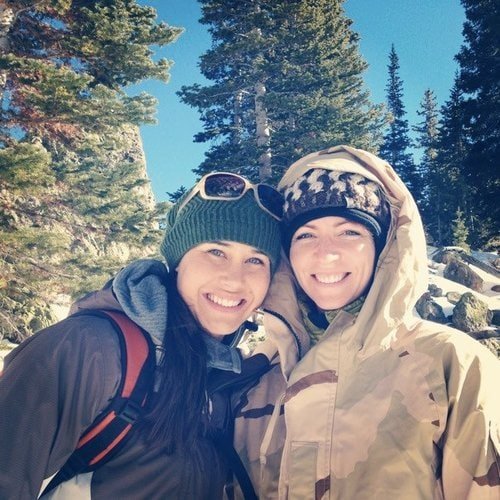 Elizabeth and Gina snowshoeing in the Rocky Mountains with Veterans Expeditions. Courtesy of Elizabeth O’Herrin

I’d recently begun attending church after a nearly decade-long absence. Like many teenagers who go off to college, my newfound freedom afforded me plenty of opportunities to experiment, and I gleefully abandoned the rigid faith of my youth. I served my first deployment when my unit was called up while I was a college sophomore. And then another, and then a third. I finished my National Guard contract, decided not to reenlist, and moved to Washington, D.C., where I searched for answers to make sense of my experiences. The idea of asking God for help after ignoring my faith for so long filled me with shame. But my mother told me to get myself to church and emailed me a few options. Shortly after, I found myself sitting in a familiar feeling service, but among many strangers.

I was also hoping to make a few friends there. I had never lived outside of Wisconsin, and D.C. punched me squarely in the face: the smothering humidity, the speed with which everything needed to be accomplished, the political subtext that crept into every meeting. Breaking into a social circle felt impossible. Occasionally I was invited along for happy hour, but I remained on the fringes. None of the women I met seemed to have space in their lives for me. If there was a lucky fissure in someone’s schedule, my military experience felt like the elephant in the room: It was too big to bring up in a casual setting, but not talking about it felt like I wasn’t being truthful about myself. In a city overflowing with bright, beautiful, ambitious women, I came to the painful realization that I was starting from scratch. 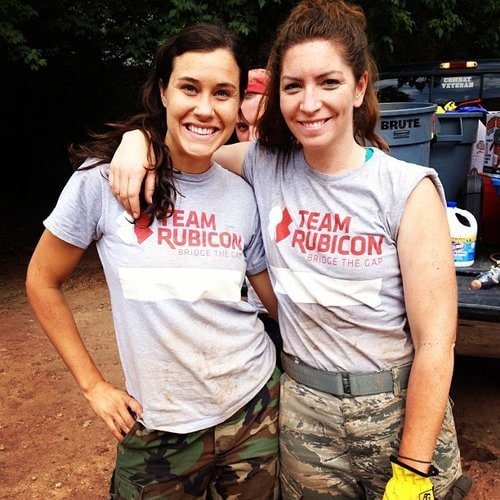 Alone with my thoughts on most weekends, I sank into a deep depression. I’d wake up on Saturday mornings and before stirring, the emptiness of the day settled over me. I’d force myself out of bed to stave off the loneliness that engulfed me in my tiny apartment. I’d wander museums and hope for new exhibits at the Portrait Gallery. There were crowds everywhere so it was easy remain unnoticed, and my loneliness felt obscured from others. When I ventured out for dinner, I aimed for the bar. I felt exposed if I sat alone at a table, and I didn’t want anyone’s pity. I drank a lot of bourbon on my balcony, the illuminated Capitol a few miles in the distance, and found myself contemplating the power of its occupants over the course of my life and so many others’ lives.

Being new to D.C. was punctuated painfully by the absence of my closest friend. My soul sister. Kathryn and I met when we were 15 and grew out of our awkward teenage phase and into womanhood, served in the National Guard on the weekends, and attended college together. We were roommates and next-door neighbors for five years. We served two deployments together to the Middle East. We’d been through enough to firmly bond us, even as most childhood friendships drifted apart. But then I moved to D.C., and she moved to New Mexico. 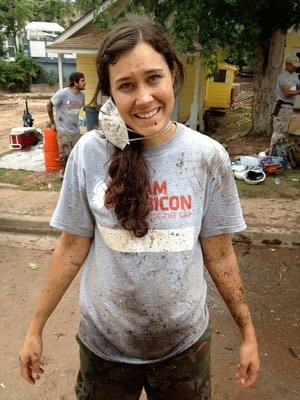 Gina covered in the dreaded

Gina covered in the dreaded “fecal freckles”, mud mixed with raw sewage, after spraying down equipment Courtesy of Elizabeth O’Herrin

And then one Sunday the pastor mentioned Gina, and I allowed myself to feel a flicker of hope. While she was deployed, I learned that she was serving as an Air Force trauma nurse on a Polish forwarding operating base in Afghanistan. After witnessing trauma nurses furiously working on my own deployments, I knew that her hands were covered in blood most days, and that she stood between life and death for a lot of young Americans. I thought of her often, and began praying for her, when I remembered to pray.

Several months passed, and then one day a woman from church invited me to a movie night. I learned the host was Gina’s roommate, and that Gina had just returned from Afghanistan. Maybe she would be there.

That night, more than a dozen of us piled on the living room floor. Plenty of girls were laughing but I couldn’t follow most of the inside jokes, and Gina was nowhere to be found. I dreaded leaving because I knew the loneliness would come again. Partway through the movie, someone entered the apartment, pausing in the doorway. I could feel her heart sink at the sight of us. Gina offered a brief hello and scurried past, up the stairs to her bedroom.

I thought about what she had just been through, and I wondered if she felt isolated and alone like I had. I knew how petty the group must have looked, tipsy and shouting over Bridesmaids. I ticked off topics I could bring up with her but came up blank. She had been in Afghanistan, I had served in Iraq. She was a trauma nurse, I had built bombs. She had served on a tiny forward operating base full of the Polish military, I had served on giant air bases with Burger King’s. She was active duty, I was Air National Guard. She was an officer, I was enlisted. It was beginning to feel like a long shot that we’d connect. 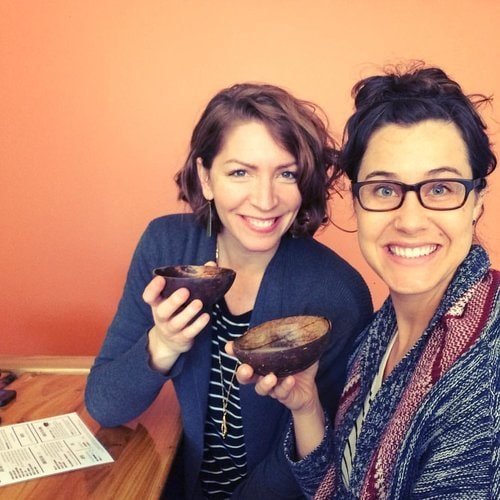 But it was worth a try. I summoned my resolve and asked for the bathroom and began poking around the house. At the top of the stairs, I saw a door cracked open and light filtering through. I knocked softly and the door pushed open a bit.

She sat cross-legged on her bed. She greeted me politely but a bit uncertainly, and I realized by entering her bedroom uninvited I could be intruding. I thought back to what strangers said to me when I came back, and grabbed the first thing that floated to mind: Welcome home. But I wanted her to know I had been deployed too, so I offered up some tidbits about my experience. I served over there, too. Sometimes coming home is the hardest part. Her face softened, and a look of relief passed. I apologized for being rowdy in the living room, and she quietly asked a few questions about my service. She wasn’t particularly talkative, and the last thing I wanted to do was overstay my welcome, so I began to back toward the door. Before slipping out, I wanted her to know one last thing. It gets better. I promise. Outside her bedroom door, a feeling of hopeful relief washed over me too. 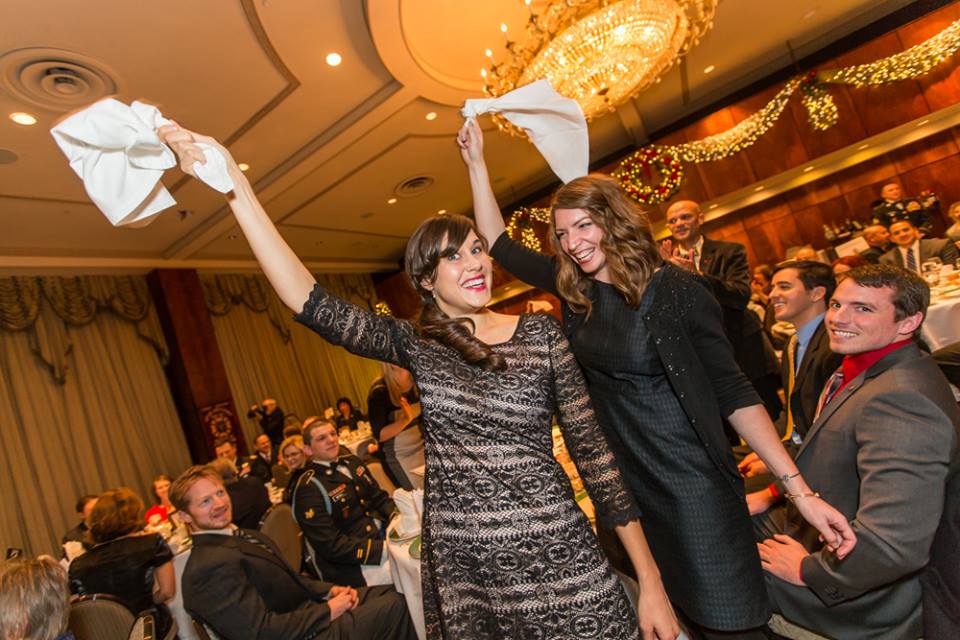 Post Script: As serendipity would have it, Liz and Gina moved from D.C. to Colorado at the same time and became true friends. They have been on epic adventures including ice climbing and road tripping, and worked with volunteers to clean up the biblical floods of 2013 along the front range of the Rocky Mountains with Team Rubicon. In 2015, Liz served as a bridesmaid in Gina’s wedding.

When Life as a Military Spouse Got Hard, Amber Was Always There
Scroll to top