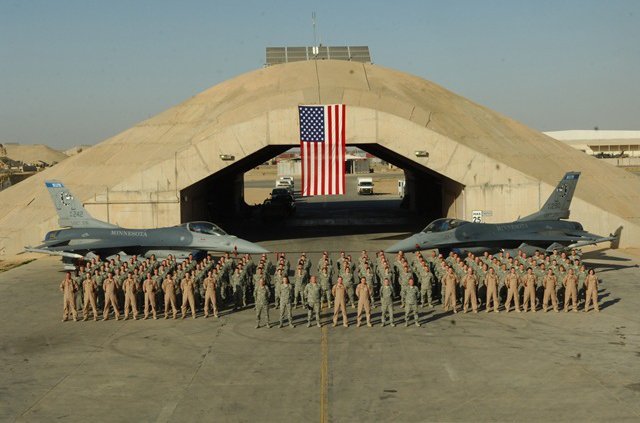 Thirty seconds is a long time to think you might accidentally kill a kid. But that’s how it was that day over Afghanistan.

We had to hurry. Chaos and Fester left, and without a break KRACR and I were directed to hit the man they were watching. The high-value dude drove out into the open. He was alone and on a motorcycle on a stretch of road running through a small valley just outside of town. I turned toward the target, and released two 500-pound bombs. I realized my mistake about two seconds after I hit the pickle button, but my part in the tactic was over. It was up to KRACR now to salvage my error and get my bombs on target.

I gave up on my high-tech sensors and looked out of my cockpit at the valley. In the bright midday sun, the road and the terrain blended into a vast field of beige. At the edge of the valley there was a cluster of buildings. I stared at them for 30 seconds, hoping that my poorly delivered bombs wouldn’t hurt innocent people.

A small black mushroom cloud burst out in the open, halfway between the buildings and me. I realized I was holding my breath. I was ecstatic I didn’t hurt civilians. And ashamed that I helped us miss the target.

We stayed after the man on the moto. He dismounted and ran up into the hills. We ran our tactic a second time, and this time we got it right. I put two 500-pounders on the man where he hid in some rocks. Eric “Shmo” Chandler was also stationed at Balad Air Base, in Iraq during 2005. Courtesy of Eric Chandler

KRACR and I were sent to orbit over an empty valley and stand by. I drank a Red Bull and thought about my mistake. We got the guy, but I wasted time and assets. We orbited for about an hour before the Control and Reporting Center (CRC) sent us to a Troops In Contact situation (TIC). KRACR flew to the tanker to refuel and I headed to the coordinates. The JTAC (Joint Terminal Air Controller) got me into the fight in a place he called Razorback Ridge. He was calm and clear on the radio, but there was gunfire and shouting in the background.

READ MORE
Shedding the Shame of Being Called a Military "Dependa"

He needed me to strafe with my 20mm gun. I vowed not to rush and screw up like I did an hour earlier with my bombs. The target was only 100 meters from friendlies. I told him I was going to make a dry pass to make sure I had the enemy position.

I was in a right-hand turn and rolled in to a steeper right bank to dive toward the target. I followed the outline of Razorback Ridge with my eyes down to the green vegetation in the valley bottom. I never saw enemy troops, but I pointed the nose of my aircraft right at the streambed where the enemy fire was coming from.

“That’s it. Call in with direction,” said the JTAC.

I started a climbing right turn when the JTAC said, almost chuckling, “Look out your left door. They just shot an RPG.” I called in from the southeast and put two seconds of bullets into the streambed I identified during my dry pass. After a big sweeping right turn, I strafed again.

KRACR showed back up with more bullets, so he took over as the primary shooter. The JTAC directed him farther south to strafe a guy holding an RPG near a wall. KRACR made several passes there until he ran out of bullets.

I took my turn and drilled the end of the wall that the RPG guy was peeking around. I held the trigger down until the gun was empty. All my bombs were gone. I keyed the mic: “Winchester.” The JTAC and his troops withdrew safely after our strafe passes.

KRACR and I returned to base. When we touched down, I felt like I just got back from landing on the moon. My day seemed just as rare. Two different fights on one sortie. Winchester.

I made one deployment to Afghanistan. I dropped more bombs and shot more bullets there than I did in all three of my Iraq trips combined. But it’s the day that I didn’t shoot that sticks in my head:

On a different day during the Afghanistan deployment, the CRC directed me to another valley. The JTAC told me to strafe a group of buildings. I’ll call it a farm. The JTAC said there was a sniper near one of the structures, but didn’t, or couldn’t, specify which one.

A gunship flying above me radioed that there were women and children in one of the buildings. I asked the JTAC if he knew this.

He didn’t seem to care. Everybody’s fangs were out.

I asked the JTAC, “Are you taking effective fire right now?”

“We’re taking some potshots into our sandbags.” He snorted it like a laugh. Where are the children? Which building? Where’s the sniper? Too many questions for me to squeeze the red trigger.

The JTAC gave up on me and told the gunship he wanted 30mm on the farm. The gunship replied they didn’t think their 30mm would be effective. But that wasn’t it. The 30mm is bigger than my 20mm and causes more damage. I thought they hesitated because they heard me try to stop this train.

I was out of gas and had to refuel. I told my wingman, Grunt, to hold his fire until I came back unless he could put his eyes on the sniper.

Then, the JTAC said this on the radio: “The air’s got cold feet.” Eric Chandler was an F-16 pilot at Balad Air Base, Iraq in 2005. Courtesy of Eric Chandler

The JTAC worked with fire support from the ground troops to shoot mortars. Each round got closer and closer to the farm as two F-18 Hornets showed up to replace me. I let the Hornets know what I was trying to stop.

Only later did I learn that several of our soldiers had been injured and killed in previous fights in that valley. Maybe it was impossible for me to understand a soldier’s mindset from an air-conditioned cockpit.

When I screwed up my bombs in that other fight, all I knew was that they didn’t hurt innocents. Only later did I see the video of my attack. The bombs almost hit the motorcycle guy on the first pass, and he ran up into the boulders, chased by the shadow of the cloud from the bombs.

In the fight when I ran out of bullets, I tried like hell to avoid a nearby house when I shot at the guy with an RPG hiding by the wall. Only later did my weapons officer critique me for letting some of my bullets hit that house.

On another sortie, toward the end of that trip, I flew over a small town in a different part of Afghanistan. The high-value target came out of town on a motorcycle. We ran the tactic. I guided the bombs. The dude vaporized and the motorcycle cartwheeled about 50 yards. The weapons officer reviewed the video later and said the attack was “textbook.” I don’t get to sit at a table after the war and sort things out. Because there is no after. The war just keeps going and going. Iraq. Afghanistan. Syria. Recently, I pulled up a satellite map on my computer, trying to make sense of where I flew during that Afghanistan deployment. I suddenly recognized Razorback Ridge where I strafed to help my buddies. But a map only knows where things are. My other questions are unanswered.

Now, when I’m out running or cross-country skiing, my mind wanders back to Afghanistan. Instead of looking at the white snow or the green trail, I think about the brown mountains tilting down toward green fields on the other side of the globe. I didn’t shoot down MIGs or dodge surface-to-air missiles. I did Close Air Support. I was in three scrapes in Afghanistan. One solitary time, I was lucky enough to clean off the racks and empty the gun. There’s a lot I don’t know, but I know one thing for sure, and it still pisses me off: My teammates on the ground said I had cold feet. My three fights improved from small mistake to precision strafing to textbook.

I should feel redeemed.