She must have stepped on a roadside bomb, although I didn’t remember hearing a blast. IEDs had been almost a daily occurrence in our brigade’s sector that summer. “Put her in there!” someone yelled as a soldier burst into the room carrying a young, dark-haired girl whose bloody leg dangled over his arm. Male medics from the other side of the clinic and a few of the security forces from outside crowded into the dusty exam room already filled with our female medics and physician assistant, who gathered around the table where he laid her. An interpreter attempts to comfort the injured girl as as medics attend to her wound. Courtesy of Melissa Thomas

Her feet were splayed across the end of the table; a white knee-high sock was pulled high on one leg, and the other was covered with dirt and blood. A bone looked to be protruding above the ankle. “How can I help? Should I pull traction?” I asked the busy room. In the chaos of stabilizing her, no one heard. I grabbed her ankle and pulled her leg straight. Tears poured from her scared brown eyes, as she gasped and grimaced between cries. My fingers felt the warmth of wet blood through my latex glove. I tilted my head to glimpse the side of her leg to view the injury and realized my middle finger was pressed up against bone. Sweat accumulated on my brow and I willed myself to focus on the patient, not my queasiness.

READ MORE
My Heart, a Fallow Field. A Letter to My Unborn Daughter.

While the morphine dripped through her IV, I helped two medics place a makeshift splint on her leg, made of two wooden boards and a cloth bandage we’d brought in our medical kit for this community outreach mission. A few minutes later her tears and cries slowed and mellowed.

Stabilize. Package. Prepare for evacuation. It was clockwork for the medics from my company.

The security forces scrambled in surprise when we let them know she was ready to be evacuated. I stepped back from the table and suppressed a smirk, nodding at the medical team’s rapid job well done and listening to the din outside the room as the security forces hurried to catch up, determining they’d need a helicopter to evacuate her to the nearby hospital in Baghdad to more thoroughly stabilize her leg. A soldier came into the room to collect the girl and asked who would go with her. I hesitated and then announced to the medics I supervise as I fastened my helmet, “I am! You need to keep seeing patients here, I can’t do that anyways.” I grabbed her IV bag and followed the soldier, who carried the girl in his arms, out of the clinic and past the crowd assembled outside, still waiting to be seen by our medical team.

One bearded man standing to the side looked particularly distraught and I learned he was the one who had accidentally hit the girl with his truck and then brought her to the clinic. So not a tragic result of war after all, just a simple accident that could have happened at any time; we Americans just happened to be at that clinic that day. I got into the backseat of a Humvee and the soldier placed the small girl in my lap. She weighed little more than the flak vest I wore. I didn’t know until later that a nearby combat cameraman took a picture of us—her lying on my lap, the Humvee preparing to leave. A line of local Iraqis waiting to be seen by the U.S. providers and medics forms outside the Mushadah clinic. Courtesy of Melissa Thomas

The heavy door to the Humvee closed and I looked out the window at a group of soldiers and a panicked teenager pointing and talking in Arabic to an interpreter.

The American soldier in the passenger’s seat turned and told me that the young man was her brother. “We told him he could come with us,” the soldier told me, “but he’s scared to be seen getting in a vehicle with us.” “Oh,” was the only reply I could muster at the thought he wouldn’t join his sister for fear of being seen as a collaborator.

It dawned on me then that until we met the helicopter and I had executed the handoff, she was in my care. My patient. Her eyelids began to droop. “Hey! Stay awake!” I said more forcefully than necessary; she blinked a few times. I tried again in a more soothing tone, “Hey little one, I know you can’t understand me. I know you don’t know English and you’re really scared. But please don’t go to sleep on me,” I pleaded. “I know enough to know that I don’t want you to pass out just yet.” I struggled to find words but continued to ramble so she’d have something to focus on. She remained silent, but her eyes stayed open.

I took in her disheveled appearance and appreciated the cuteness of her outfit, a white T-shirt with blue jumper skirt and knee-high socks. She looked like she was dressed for her first day of school or a church outing, not for playing on the side of a dirt road. She couldn’t have been more than seven. I hoped my female face underneath all that Army gear offered at least a bit of comfort.

“So, little girl, it’s just you and me for a while. I’ll keep you company.” The vehicle started up with a loud rumble and we headed north toward a spot on the road with enough clearance for the Blackhawk to land. My heart began beating faster in my chest once we’d stopped. “Ok, we’re going to get out now and take you to a helicopter. They are going to take really good care of you.” The author, Melissa Thomas, and the girl from Mushadah await transport to the helicopter landing site. Courtesy of Melissa Thomas

The soldier in front picked her off my lap and laid her down on a litter. She continued to hold my gaze with occasional long blinks. She lay limp and relaxed as we strapped her on. As the midmorning sun continued to roast, I squatted down, using my body to shade her face. I spoke English-nonsense to her, “I hope you’re doing all right, it’ll be here in a minute.” She lay quietly, not reacting to my words, but staying calm. “Whop, whop, whop,” and I watched as the Blackhawk came into view and settled the length of a football field up the road from where we had parked. We knelt next to the litter, grabbing the edges. “One, two, three.” We stood up and off we went. The flight medic appeared as we approached, and I waved my hand so he would come my way for the medical synopsis. I spouted off the information I’d rehearsed, shouting over the running motors. My heart raced as we slid the litter onto the helicopter. The flight medic climbed in after her, and just like that, my job was done.

The relief was short-lived as I glanced around and saw the three soldiers who had carried the litter with me kneeling with rifles drawn up to their shoulders, pointing away from the helicopter, prepared to respond to an attack on the bird. I looked down and gulped and knew my rifle was not slung on my back. We weren’t within the confines of our “safe” operating base and my rifle leaned against the Humvee’s door 100 yards away.

Still too loud to hear over the rotor blades, we made eye contact and moved back toward the truck. I ran a bit faster, scolding myself for my rookie mistake. Perhaps my officer status, or the fact I came from a medical company, protected me from ridicule; no one mentioned my rifle gaffe. I climbed back into the Humvee, ready to be taken back to the clinic. I watched the helicopter lift off for Baghdad, unsure of what would become of the little girl in the blue jumper.

Today, that nameless girl from Mushadah would be about 18 years old. If only that photo of her in my lap had been published then and someone had tried to find her name, leading to a reunion. Maybe then I could learn if what I did in Iraq mattered. But instead, like most veterans, I’m left to wonder. 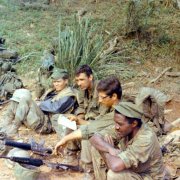 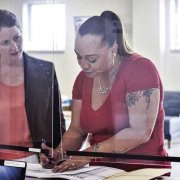 Peacekeepers, A “Teeming Mob,” and A “New Excuse for War&...
Scroll to top