When my dad was in college, he took a Pennsylvania history class, prompting him to delve into family history and genealogy. This is what he learned: His Great-Uncle Wally had served in World War I in France. There was a monument to his regiment and division in a small town “over there.” He had been 18 when he served as a soldier for the U.S. Army.

Along with Uncle Wally’s Army-issued shaving kit and doughboy helmet, that was the entirety of it.

Uncle Wally and his wife, Aunt Mabel, never had children, and they treated my dad and his brother to popsicles and color TV, stories and treats. Their home was neat and tidy, welcoming and friendly, and my dad loved them both for it.

But like many who have witnessed unspeakable carnage, Uncle Wally didn’t talk about his heroics and experiences—which were already half a century past when my dad knew him as an old man.

Uncle Wally’s service had been family lore. And the monument—erected somewhere in a small town in France—loomed large in my imagination. My dad didn’t know the name of the town. 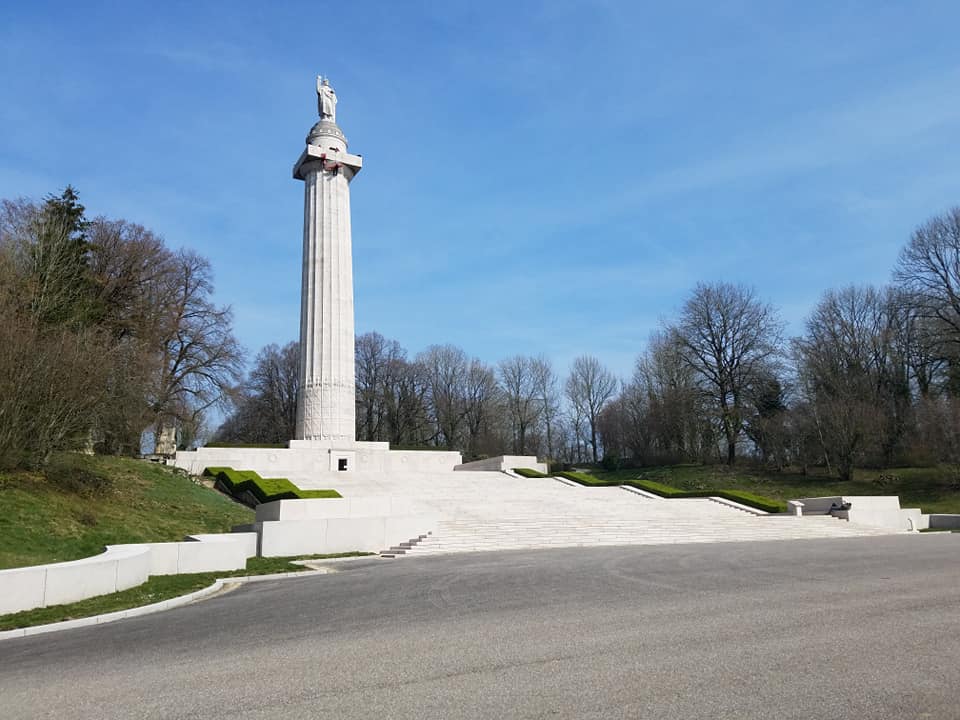 The American Memorial at Montfaucon-d’Argonne rises above the French countryside. Photo by Joanna Guldin-Noll.

As a kid, I imagined traveling—going town by town—until I found the provincial monument in the town square, surrounded by flowers, perhaps, from adoring Frenchmen who never forgot their American saviors.

When my father retired from a lifetime of teaching band to elementary school students, his schedule suddenly opened. He sat down at his computer and, within a few days, he had unspooled a decades-long family mystery.

The Meuse-Argonne offensive sent 1.2 million American soldiers to the Western Front, the last—and bloodiest—push to end the war. It gave Americans a hero in Sgt. Alvin York, made “Verdun” synonymous with “total destruction,” and spared future President Harry S. Truman from a battlefield death. 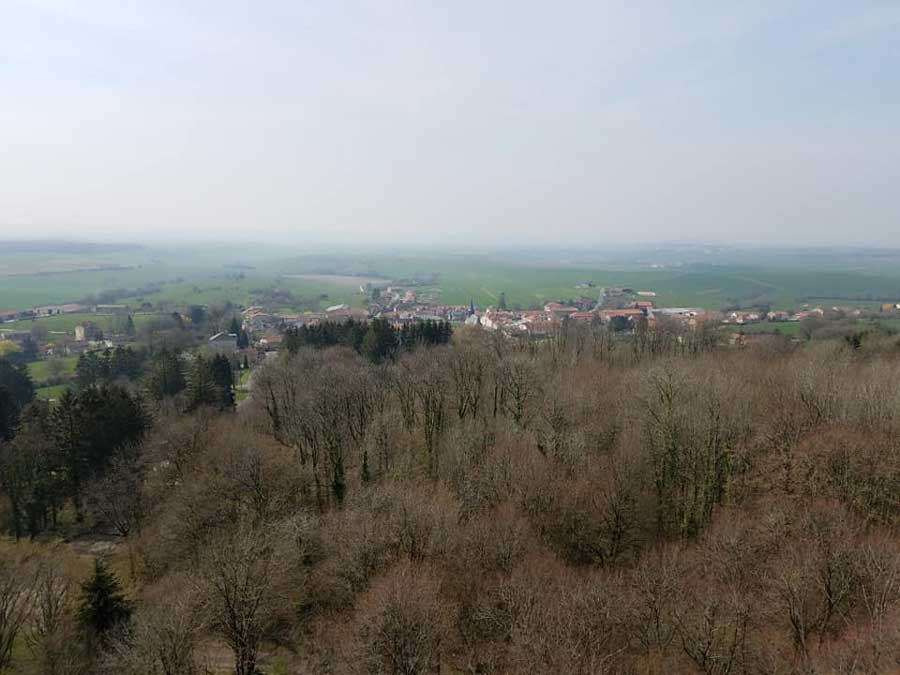 The view from the top of the American Memorial includes the ruins of the original Montfaucon and the village adjacent. Photo by Joanna Guldin-Noll.

From Sept. 26 to Armistice Day—47 days—American, British, Belgian, and French soldiers threw themselves at the German Army, slowly pushing east and north, and eventually breaking through the Hindenburg Line. Every inch was paid for in blood, with 350,000 casualties, military and civilian alike, when all was said and done.

Among the dead were 26,277 American soldiers.

But not Uncle Wally.

Uncle Wally would come home, live a peaceful life in a peaceful Pennsylvanian town, marry a kind woman, and die an old, old man, having cheated Death as a teenager in smoke-choked France.

France wears scars from its wars. As we waited for the bullet train in the Gare du Nord, plaques braced to the walls of the train station acknowledged the thousands of Jews who were deported by French police to their nearly inevitable deaths during World War II.  As we buzzed by the French countryside, towns razed by two wars and then rebuilt flashed by the windows. Our stop on the TGV—France’s high-speed train—was Gare du Meuse, the name of a river more regularly associated with apocalyptic battles than peaceful waterways.

After linguistic wrestling with a bus driver over tickets, we traveled another 30 kilometers to Verdun. On a two-lane country road, we passed through small towns clustered with stone homes and dotted with free-range chickens. The land appeared wide and flat and expansive, making it easy to imagine the advance of a war machine, churning over otherwise bucolic fields.

Gare de Verdun welcomed us with banners depicting its post-World War I cityscape, as well as the one 100 years later. After a long walk to a car rental place and negotiations over a van, the six of us—my parents, two sisters, husband, and myself—clambered inside and began our drive to Montfaucon-d’Argonne.

I imagined Uncle Wally—a man long dead before I was born—would have felt some familiarity in the farmland stretching out in all directions like a patchworked bedspread. Small farms cropped up and then disappeared. The edges of the land curled gently upward to hills that we would not explore.

Today’s Montfaucon-d’Argonne appeared after World War I and is positioned adjacent to the rubble of its namesake: a town built on a bluff that was ravaged by disease in the earliest part of the 20th century and then blown apart by the First Army’s assault. The pieces of the first Montfaucon stand protected as an intentional monument to the havoc of war and the civilian cost of conflict.

We drove through a sleepy and deserted Montfaucon-d’Argonne built carefully as a facsimile of a centuries-old town, with a cafe, bakery, and cathedral prominent. In a small town park, a monument to Pershing and an American tank with a white painted star stood watch. White arrows pointed us up the only hill in view, toward the Memorial Americain. 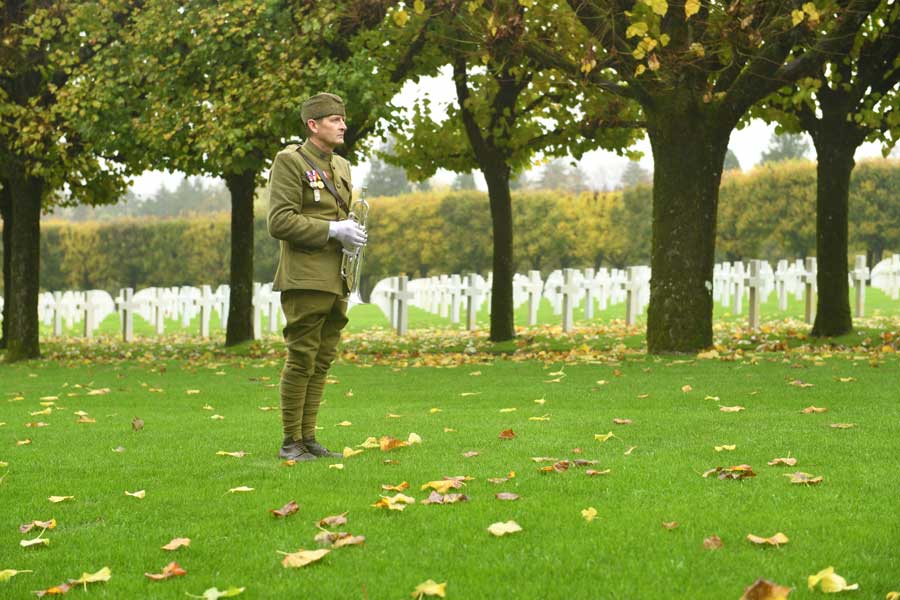 Pascal Boullieaux, a French World War I reenactor and baker, waits to sound his bugle during the Veterans Day ceremony at Meuse-Argonne American Cemetery and Memorial near the Argonne Forest in France, Nov. 11, 2017 – known as Remembrance Day in France to commemorate the end of World War I. Photo by Senior Airman Nick Emerick, courtesy of the U.S. Air Force.

The war-weary French villagers did not create a small, humble thing. More than 200 feet tall, with Lady Liberty as a beacon at the top, the American Battle Monuments Commission built it and unveiled it just four years before the United States entered another world war and seven before Americans once again landed in France. The grand, massive Doric column juts up from the highest position in miles.

We walked around the base of the monument, explored the ruins of the first Montfaucon, peered through the closed gates of the town’s cemetery, and entered German bunkers that sat at the edges of the bluff, built hurriedly and heavily, their concrete and steel reinforcements standing the test of time.

In the First Army and under storied General John Pershing’s command, Uncle Wally fought with the 79th Division’s 314th Regiment. Made up of immigrants and Eastern Pennsylvanians, they shipped from Fort Meade, after being the first division to be reviewed by President Woodrow Wilson, and found themselves in Brest, France, to train again for a few weeks before they headed to the Western Front.

They would move slowly across the battle-scarred country, past ravaged towns; dead, bloated animals; and homeless villagers. They would fail the first assault on Montfaucon, the German entrenchments that my family sauntered in and out of paramount to defending the hill. From this position, the kaiser’s soldiers could accurately call for artillery fire onto the advancing American Army, while machine-gun nests sprayed bullets across the expanse.

Finally, Americans—including Uncle Wally—broke through the lines of reinforcements and scrambled up the wasted landscape, through rings of barbed wire and under artillery shells whistling above their heads, and captured Montfaucon. 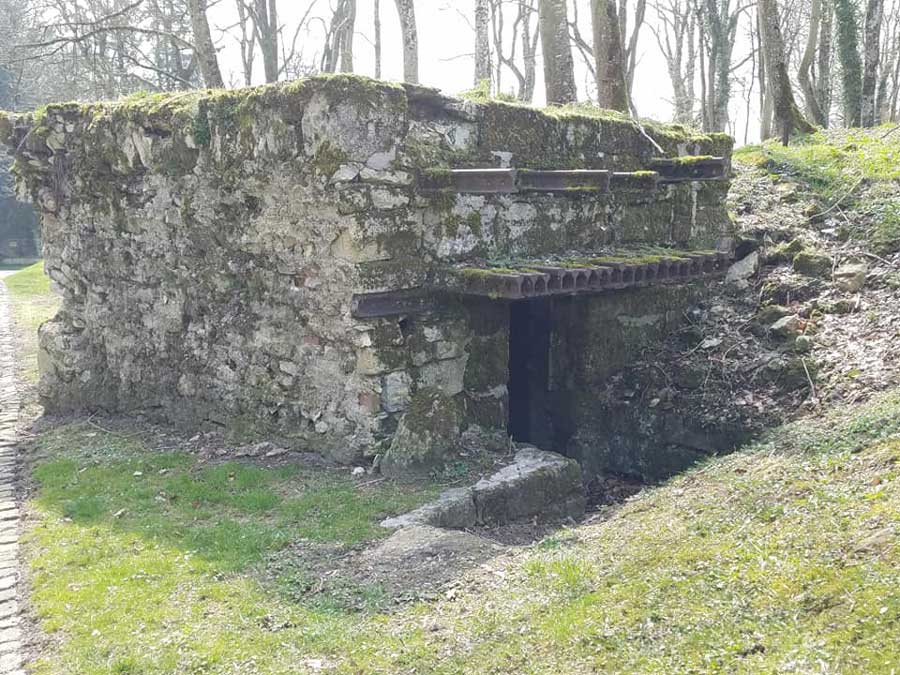 Later, we would drive over dirt roads to the middle of a field, a memorial perched on La Borne de Cornouiller. For most Americans, World War I is of little consequence, our collective imaginations primed more for the cultural zeitgeist of World War II or the drama of the Civil War. It seems sadly fitting, then, that the Battle of Montfaucon is all but forgotten by everyone but the most fastidious military historians.

The fight to take the reinforced German lookout on Borne de Cornouiller is completely forsaken.

After Montfaucon, Uncle Wally would fight his way through reinforced ravines—literal valleys of death—across ruined towns and over desolate, shelled fields, and would be again ordered to take another strategic hill. Perhaps he would have had a few minutes’ respite to use the shaving kit my father now keeps carefully packed away.

Against a barrage of fire, Uncle Wally and others would take Borne de Cornouiller just five days before the Armistice.

Far less ostentatious than the first monument, the one that marks this assault stands just a few meters high, is made from cement, and is ringed by boxwood bushes. It reigns over cultivated fields and country roads. It appears carefully maintained but rarely visited.

I stood there, golden afternoon light washing across the fields, the earthy scent of manure drifting across the expanse. I imagined Uncle Wally running up this very hill, his flat-brimmed helmet wobbling on his head.

My husband stood, taking in our surroundings: He had deployed to Afghanistan five years before. I wondered if, some day, someone in our future family would visit Bagram and look out across the terrain, just as he did now.

I watched my father, who had been quiet at the American Monument and who, after descending 234 steps, wrote simply in the guest book, “Here for Uncle Wally.”

A few kilometers away, at the Meuse-Argonne American Cemetery, 14,246 white headstones nestled in perfectly manicured grass, and the bodies beneath rested, all facing home.

“No One Is Winning”—U.S. War in Yemen “Fundamentally a Stalemate”
‘Time Heals Old Wounds. So Does a Bottle of Rum’

A Journalist’s Favorite Image Mirrors a  Loss
Scroll to top