It’s early spring 2017 and I’m somewhere in Syria, north of the city of Raqqa. I’m part of Combined Joint Task Force Operation Inherent Resolve, itself a part of the grandly named Global Coalition to Defeat ISIS. The mission is to “degrade and defeat” ISIS. For us specifically, that means supporting the Syrian Democratic Forces as they clear ISIS forces from Raqqa.

It’s a grand name and a good mission. We feel lucky to have it. It fits well in the Marines’ long-standing self-promotional vision of ourselves, the Reagan-flavored narrative Kool-Aid we love: “Some people spend an entire lifetime wondering if they made a difference in this world. Marines don’t have that problem.” 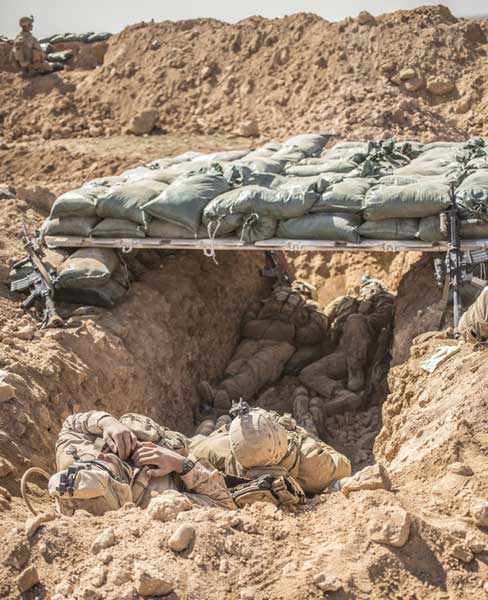 The day to day looks a bit less like the commercials.

The intelligence officer starts his morning sitrep with, “Good morning, — base!” in imitation of Robin Williams imitating Adrian Cronauer, life imitating art imitating life. He gives us the previous day’s BDA (battle damage assessment): We killed 30 ISIS fighters yesterday, the FLOT (forward line of troops) moved south two kilometers. Sure. We’ll be home by Christmas, boys (it’s April, we know we’re going home in May); the Hun is on the run, Charlie don’t surf, and all the other war movie cliches. Then he’ll play music (you can submit requests) and give sports scores. We talk about news from “the world” because that’s what they did in Vietnam.

When it’s over, we turn our radios back to the tactical net and stare at the blue sky and try to spot our planes overhead—the full NATO panoply, mostly fighters but once a lumbering B-52. We see the gray splashes of smoke rise from the horizon as the bombs fall. Our artillery shoots—all day, all night, hammering away; rounds passing overhead, making that wonderful, horrible tearing sound from the sonic booms they trail in their wake. The sun creeps up in the sky, shadows shortening till they disappear beneath you and then inch back out in the afternoon.

By sometime after lunch, the sun is high in a cloudless sky; the turret gunner is slack-jawed, staring out across the same 2,000 meters of featureless fallow dirt he’s been looking at for two months. I’m kneeling in the dirt outside the vehicle fighting position, digging. Watery mud formed by sweat and the dust caked onto my hair and skin dribbles down my forehead, across the frames of my sunglasses, and into my eyes. I’m surrounded by 15 full sandbags, the untied green tops sticking up like new shoots of a plastic plant. I’m holding my e-tool just above the blade like a trowel and I feel like a demented gardener trying to grow plants that won’t be harvested, from seeds that won’t germinate, in soil that hasn’t been watered in years. But we’re tasked with filling 200 sandbags per man per day and I’m the platoon commander. I’m supposed to lead by example, and even if you’re good and working hard, it still takes a minute per bag. Nobody wants to fill bags for three hours even when we have nothing else to do. Leading by example is the theory, but it’s just a theory, and I spend a lot of time alone in my sandbag garden. 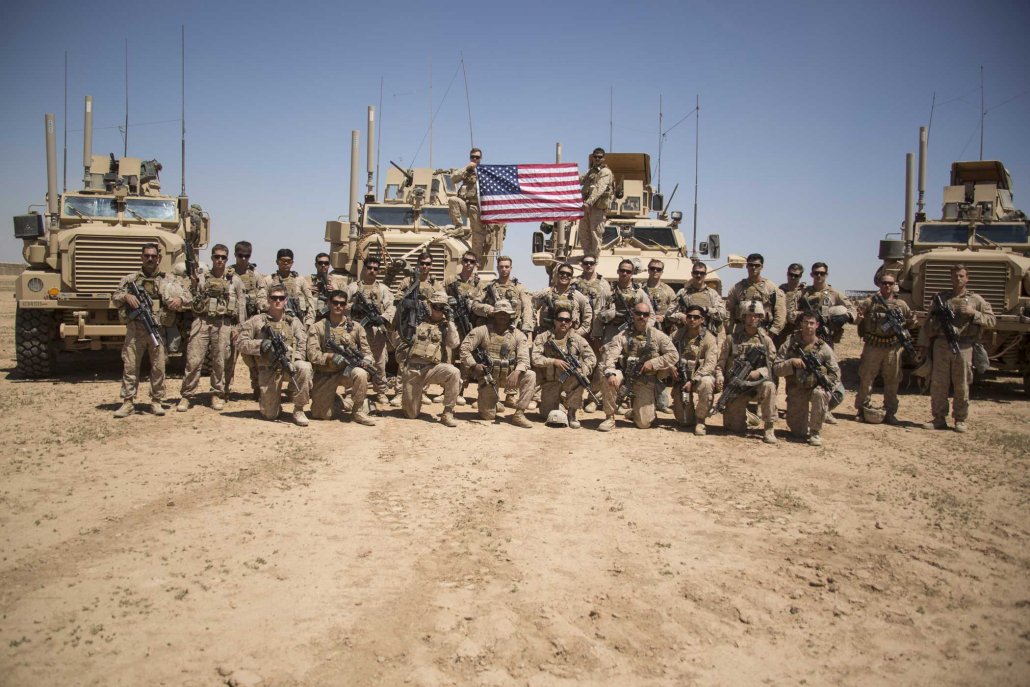 On these days, it’s hard to feel like we—the infantry—are doing anything meaningful at all. We’re just here, way out here, disconnected from the world, digging holes in the ground, providing “security,” defending our forward outpost from an attack that won’t ever actually come, passing the time. In fact, we spend a lot of our time wondering, mostly alone, sometimes aloud, if what we’re doing makes any difference, to anyone, at all.

On these days, I keep catching myself absent-mindedly hoping that we’ll take incoming fire. It’s such an obviously stupid desire that I never admit to it aloud, but I’m almost certain everybody shares it. There’s no obvious rationale—it’s not so we can shoot back, or because it reveals where the bad guys are hiding. We already know where they are: Raqqa. We never actually see the people shooting at us—all the incoming fire is indirect, rockets mostly, maybe mortars, once a decrepit-but-accurate Russian artillery piece—nor do we need to.

So why do we harbor this perverse hope? Boredom’s part of it, sure. But there’s more to it.

It starts when the radio on my flak chirps. There’s a half-second expectant pause and all the guys on the net hold their breath and then the kid in the COC (combat operations center) who stares at the counter-battery radar monitor all day is yelling, “Incoming! Incoming! Incoming!” into the handset in a voice that sometimes still cracks because he’s only 18 and the air horn back at the CP (command post) is sounding long blasts over and over in the still morning air and the guys on all the posts echo the call at the top of their lungs “Incoming! Incoming! Incoming!” because only the posts and maybe the officers have radios and everybody needs to hear and there’s not much time. 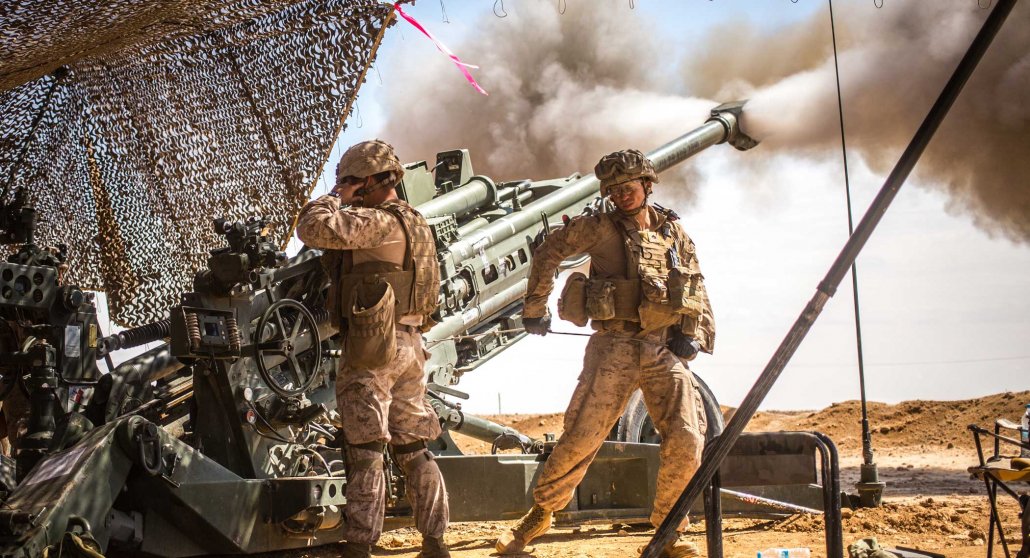 It’s usually seven seconds. It doesn’t sound like much, but a lot happens in seven seconds. I can get to my vehicle and close the armored door, let myself take reassurance in the sound of the latch clicking closed. I can dive into a bunker or an antitank ditch or any old hole in the ground to hide from the shrapnel that comes screaming out horizontally. If I’m really in the open, on my way back from the shitter or the CP or wherever, I run. When I know I won’t make it in time, I just lay flat on the ground and think small. It’s not bad, really. It’s worst when I’m already where I need to be—bunker or vehicle or hole. These places are good protection against fragmentation, but I’m still dead for sure from a direct hit. When I’m there, there’s nothing to do, so I sit still and experience just how achingly long seven seconds can drag out, and I think about that rocket in the air, and my stomach knots down hard in my lower abdomen.

There’s a loud, shattering boom when the round lands. Since I heard it, it didn’t get me, and before I can stop it, relief washes over me in a warm happy wave, nerves and guts unclenching with the simple pleasure of still being alive. And even as it washes through me, I feel guilty because my relief is selfish: I know I’m OK, but I don’t know yet if everyone else is too, and I’m feeling giddy while a buddy might be bleeding out. But we’re lucky—nobody gets hit while I’m there—and so I never do find out just how deep that guilt would go. 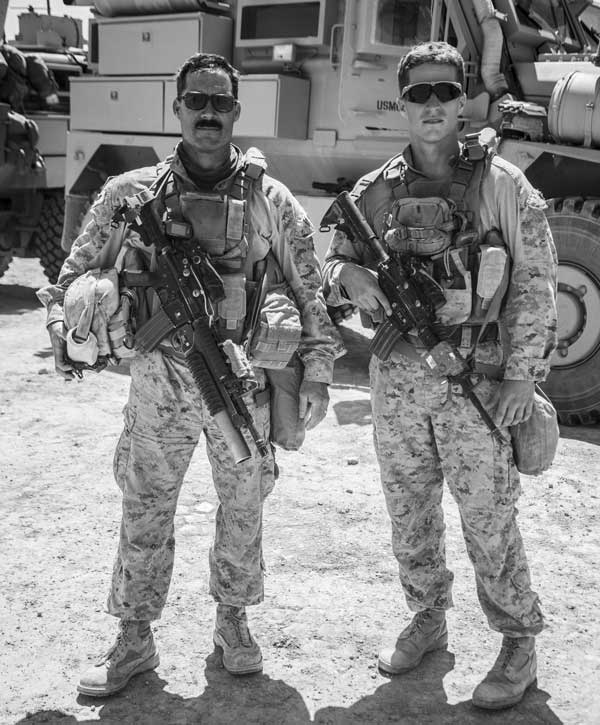 The author and his platoon sergeant, Gunnery Sgt. Christopher Carney, after a motorized patrol. Photo courtesy of Jakob Stark.

But right along with the incoming rocket and the fear comes a visceral certainty that we’re there for a purpose. As the smoke rises from the crater, my faith that it all matters is renewed—from the decision to enlist to the countless nights away in training to the unending military-issued stupidity to the sandbags and the dirt and the danger. It feels like, one Iranian surplus Katyusha rocket at a time, ISIS validates my existence by trying to end it. It’s not a bad recommendation, coming from someone or something that evil. It works as a microcosm for the paradox underlying my military service. War is bad—I’m not a monster—but I’m a grunt and I wanted to go to combat. So I tied myself into knots acknowledging that war is evil, but there are bad people out there who are perpetrating evil, and I’m willing to risk my life making sure the good (or at least better) guys win.

This sort of validation is addicting. It’s also stupid and dangerous. Taking incoming fire doesn’t help us accomplish our mission one bit, doesn’t clear ISIS from Raqqa a minute faster, never even rates us a much-coveted combat action ribbon. It’s trading the real risk of violent death for an illusory sense of purpose, and part of me knows it.

So the certainty dissipates with the smoke, carried south toward Damascus on the wind blowing down off the Turkish steppe. All that’s left behind is its nonsensical but tantalizing aftertaste. In my truck and my hole and my plastic garden, I do my best but never quite succeed in compartmentalizing my perverse hope. Tomorrow might be a good day. They might shoot at us again.

“Our Backgrounds Are Not Monolithic”—a Look Inside the Military’s...
Scroll to top