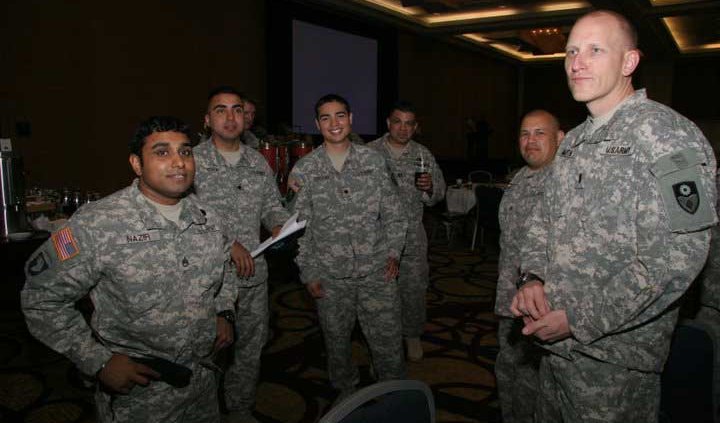 I first encountered Mohammed Nazir on California’s Central Coast in the spring of 2009. We’d arrived at Camp San Luis Obispo in preparation for a yearlong deployment to Iraq. Joined by a hundred or so other National Guard military police officers, we would spend the next few months shoring up paperwork and running through drills meant to remind guardsmen they were very much in the Army (a fact easily lost among the flights of seagulls and breeze off the nearby Pacific). 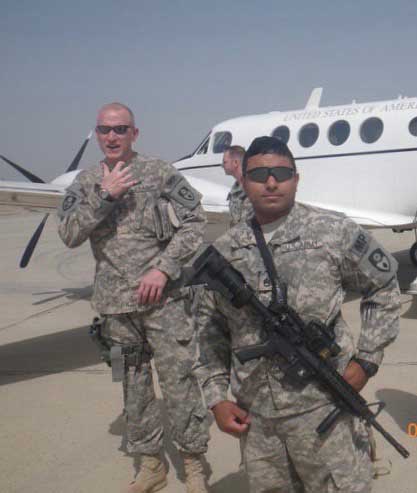 Will Martin, left, and Mohammed Nazir depart a C-12 airplane at Baghdad International Airport in 2009. Photo courtesy of the author.

One morning, I found myself toward the back of some God-awful line, a gauntlet of admin soldiers sitting between me and freedom. Spotting a handful of NCOs against a nearby wall, I decided my misery could use their company.

The patches on their right sleeves indicated these men had seen combat. New to the unit, I was a freshly minted second lieutenant with a background in journalism and public affairs. Even more damning, I’d been selected to serve as aide-de-camp to our brigade’s commanding general. I might as well have announced I was the unit’s new choir director.

“How’s it going, Sir?” came the lazy, obligatory greetings, the more courageous offering rhetorical jabs: Why hadn’t they seen me on the .50 cal or MK19 range? Ignoring them, Mohammed leaned in and engaged me in full.

I learned Mohammed and I were a study in contrasts. He was a Sunni Muslim, while my spiritual journey was mostly of the evangelical variety. We’d both experienced divorces, but unlike Mohammed, my questionable choice in spouses was my own. His parents had hand-picked his future ex-wife. And though we were both committed soldiers, this would be Mohammed’s fourth combat tour; my foreign travel, on the other hand, consisted of college day trips to Ontario, inspired by Canada’s lower drinking age.

I also learned where Mohammed was from. Because I asked him. Like, in that unbearable way white folks ask conspicuous ethnic minorities where they’re from, as if we’re welcoming them to our country.

“I’m from Lodi,” Mohammed said, before offering a treatise on how the California town produced arguably the world’s finest zinfandel grapes. He was screwing with me. He’d fielded this question so often, so consistently, that to amuse himself he’d offer evasive half-answers to see if he could shake loose some xenophobia. Satisfied of my good intentions, he cut me loose, letting me know his family was Indian and Fijian, but that he’d been born and raised in the States.

Before we departed for Iraq, Mohammed was selected as the general’s personal security officer (a.k.a. bodyguard). And because our military police brigade would be responsible for training Iraqi police across the country, our general would spend nearly as much time outside the wire as in the Green Zone, with Mohammed and me in tow. 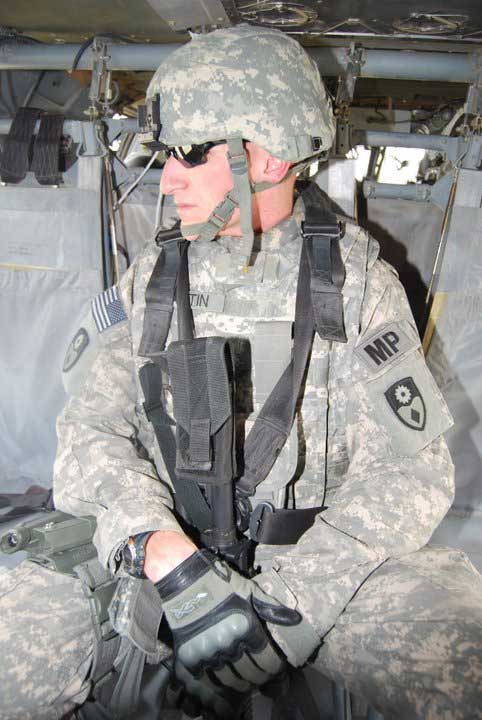 Will Martin looks out of an Army Black Hawk helicopter during a flight over Iraq in 2010. Photo courtesy of the author.

So we talked. A lot. Whether held waiting for the general outside an hours-long meeting in Mosul or screaming through the rotor wash of an open-door Black Hawk, our conversations dug deep.

Early in our tour, Mohammed opened up about his time with the 101st Airborne. A few years after 9/11, President George W. Bush paid a visit to Fort Campbell, Kentucky, where Mohammed served on a detail assigned to guard Bush’s motorcade route. While at his post, a Secret Service vehicle pulled up, and the agents called Mohammed carside. In a forced conversational tone, two men grilled him at length about his motivation for serving, his family background—everything but his favorite color, he said. Not long after, a bomb squad cleared his area, followed by a Secret Service SUV: different agents, same questions. Finally, as the president passed through, a Black Hawk slowed to a hover above Mohammed, weapons pointed downward.

“I thought, Man, these guys don’t mess around,” Mohammed said, impressed the Secret Service would painstakingly screen every last soldier within a stone’s throw of the president. But they hadn’t. Trading stories with other MPs later in the day, Mohammed said he learned he’d been singled out for such thorough vetting.

“So, yeah, it was really about this,” said Mohammed, running his finger along the Arabic last name on his uniform. “I mean, I get it. We’re fighting Muslims, and I’m a Muslim. But I don’t even consider these guys Muslims,” he added, tossing his thumb behind him toward the radicalized Iraqis outside our forward operating base. “I’ve been in firefights with these guys, and you’re going to threaten me with a Black Hawk because of my last name?”

At the risk of slighting Mohammed’s faith, I should be clear: A minute in his presence and it was clear he was as much soldier as Muslim, more patriot than believer. Several tattoos darkened his skin further, and his conversation easily turned to talk of women, strong drink, and tactical competence. And yet his features and name proved an irresistible anchor for some of us used to swimming in a sea of white normalcy. 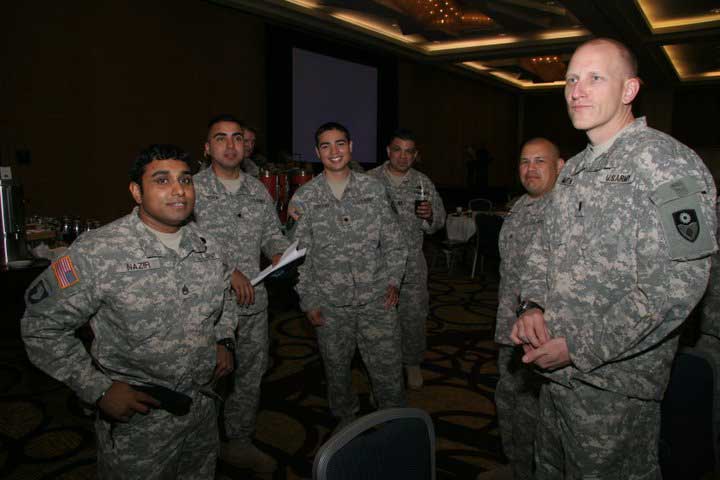 Mohammed Nazir, far left, and Will Martin, far right, attend a post-deployment function with other members of the 49th Military Police Brigade in Fairfield, California, in 2010, shortly after a yearlong tour in Iraq. Photo courtesy of the author.

Once, while waiting as our general conducted a meeting in Al-Faw Palace, another general paused to chat us up. After expressing amazement at finding an actual second lieutenant on Iraqi soil, he turned to Mohammed.

“Where you from, Sergeant?” he asked, his eyes locked on Mohammed’s surname. Sleep-deprived and unimpressed by rank, Mohammed wasn’t feeling particularly gracious.

“California, Sir,” he said, dropping the words like that would end the matter, knowing good and well it wouldn’t.

“Yeah, your family from there, then?”

“Well, I’m from Lodi. You know California, Sir? It’s near the Central Valley, a wine town.”

“So, you were raised there, then?”

“In and around there, before joining the Army. I mean, the Army’s taken me everywhere.”

“All right, then,” the general said, pausing as if Mohammed might sense some obligation to offer up the real goods. “Well, thank you for your service.” 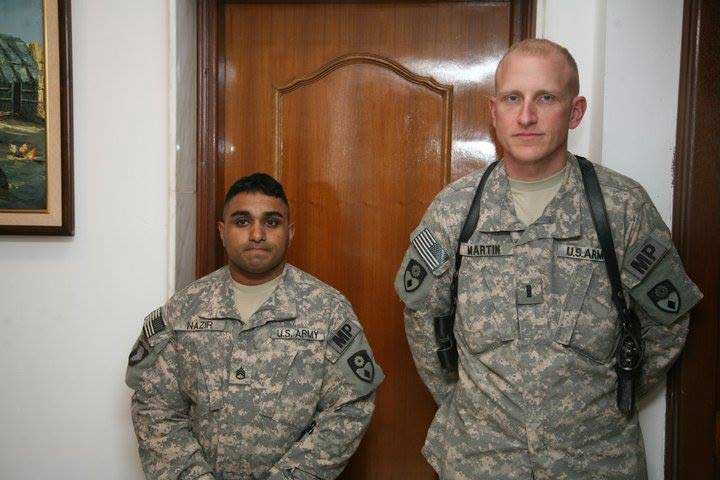 Mohammed Nazir, left, and Will Martin wait outside a meeting room on Victory Base Complex in Baghdad, Iraq, in 2010. Photo courtesy of the author.

And, so it went, this same conversation playing out a dozen times in my presence during our tour. Even our Iraqi-American translators sometimes addressed Mohammed in Arabic, before his deadpan face alerted them that, like most Americans, he was all about that monolingual life.

Our conversations also plumbed the depths of faith. On occasion, needing a little inspiration, I’d pull a small Bible from my pack, underlining passages that rang true. Mohammed would lecture me on treating sacred writing so flippantly, noting a Muslim would never take a pen to the Quran. We debated the deity of Christ, discussed our mutual fascination with the Crusades, and geeked out the day we flew into Ur, the birthplace of Abraham, the father of monotheism.

And through it all, I grew. In my respect and affection for Mohammed, but also in my appreciation for the complexities of people outside my tribe.

The U.S. military is facing a wave of scrutiny—well-deserved scrutiny—for the apparent growth of white nationalism and other extremist elements in its ranks. And, frankly, I don’t get it.

Yes, I understand a steady diet of Tucker Carlson and MAGA rallies can skew one’s grip on reality. But after 21 years of service, I can’t grasp how anyone can eat, sleep, and fight alongside the stunning diversity that is the U.S. military and emerge more entrenched in their echo chambers.

Perhaps the problem at its core is systemic, and the answer is more policy than personal. But I’m idealistic enough to believe that relationships carry the power to transform. Those relationships are among the greatest gifts the military offers each of us who serve.

She Struggled With Alcohol Abuse. Now This Sailor Wants to End the Stigma of...
Scroll to top