There are times you have to think outside the box. This was one of them. My parents had moved back to Chicago from San Diego a few years before the new millennium—my mother had hastily packed and was anxious to get back to familiar surroundings because, by that time, my father had developed a severe case of Alzheimer’s. It was a sad time: There were so many things I’d still wanted to ask him, but that window of opportunity had tightly shut.

After my dad died, I cleaned out the garage. That’s when I saw the rusty metal box. My mother didn’t say much about it. It was the last thing on her mind.

Inside, I found a folded-up, yellowed newspaper with a headline in bold print that read, “The War is Over!” Underneath, I found a dull disc made of metal on which my father’s name was engraved. My mother’s reaction?

“Oh, that must have been Dad’s dog tag,” she said.

I’d never seen one before except at a chain restaurant. The server had slipped her late boyfriend’s disc onto a shiny silver chain. It bounced against her chest as she took our order. 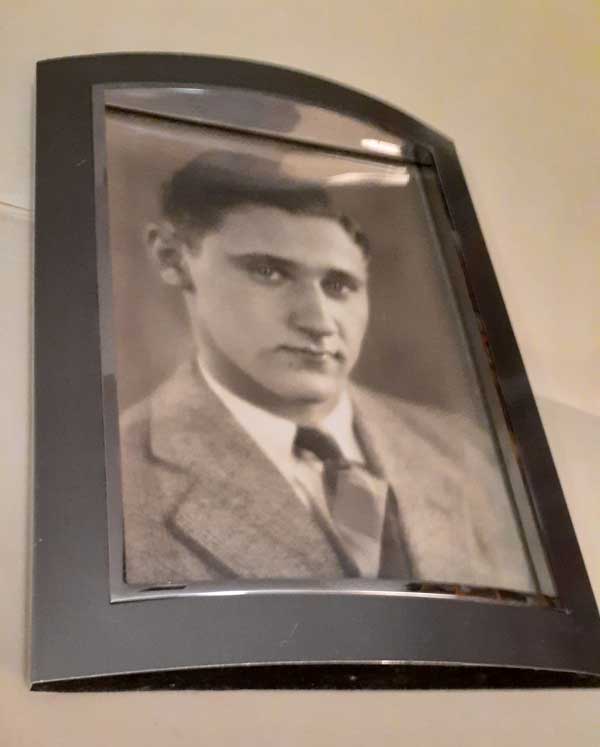 With my next reach into the unknown, I dug out a gas mask. And then, an assortment of photographs. One showed uniformed white soldiers conversing with muscular men dressed in scant clothing. Tree canopies obscured the sky.

Another photo showed my father smiling down at a petite and neatly dressed Asian woman. I’d never seen my father so sun-tanned and svelte—or in such a natural setting.

A new stack showed bombed-out buildings, one with the facade partially intact—at least enough so I could spot the regal name on the marquee. Perhaps it had been a grand palace that housed films. In the background, a group of small boys gathered around mounds of rubble.

I also saw a stack of letters and postcards with curious markings—I was too green to know about the army censors. I pored through the stack, anxious to see what my father considered worth writing about.

“Molly, where’s that salami?” appeared on several postcards. There was also a shot of my father making a sour face as he looked down at a tin plate. My father hated Army food. I later learned the challenge the Army faced during World War II, keeping food chilled properly in the tropical heat. There were times when the soldiers may have had to eat spoiled meat. The only saving grace would have been to receive a hard salami from Chicago, which never came.

I became obsessed, thinking about things I’d never thought about before. The soldiers had to construct hospitals and barbershops almost from scratch. And little by little, I began to make assumptions about my father’s war years, which I longed to have validated.

I saw another photo of men wading through murky water to get to a tank landing ship. Again, I’d never thought about the ABCs of war. One piece of stationery showed the name “Spadra.” When I looked up this mysterious word, I discovered it was the name of a small town in California, near a train used to move soldiers to the next leg of their voyage. Although the geographical area still exists, it’s now merely a ghost town.

Every photo and scrap set me off thinking about the lives my father and his tentmates lived. True, I wasn’t starting from scratch. My father had told me about eating steak and eggs in Sidney, Australia; the unapologetic heat in New Guinea—not to mention “jungle rot”; and the Japanese sword he brought back to Chicago, which my older brother traded for a football. 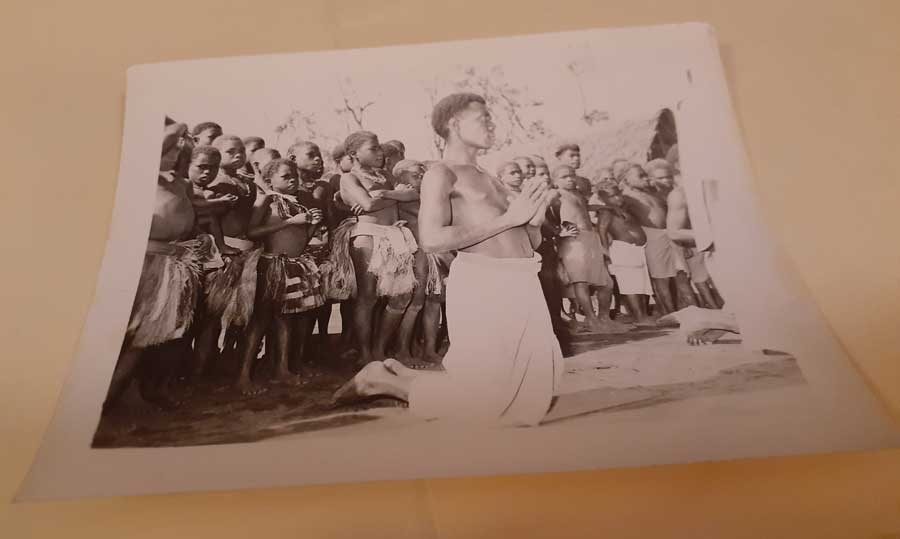 I yearned to match up each image with historical facts. I believe I have discovered that the muscular men wearing native garb may have been the litter carriers who saved the lives of injured G.I.s by holding them above toxic waters and unwieldy foliage so they could visit the medics.

I matched an image of a marching band to a downtown street in Pomona, California. I also found a never-sent letter in which my father waxed rhapsodic about meeting up with some relatives before being shipped off overseas. This aunt and uncle apparently drove my dad through gorgeous mountain ranges, sights he’d never seen growing up in the Midwest.

I was also tipped off that I could send for my father’s Pacific theater medals. I was excited to see the shiny veneer and the sculptured engravings on each piece. A few days after they came, I placed them in a handsome wooden shadow box that my mother kept on the console table.

One of my favorite photos was of my father dressed in his neatly pressed uniform. There he was, standing next to his immigrant parents outside the brick building that housed their cramped apartment. I’ll never know the details. Was this the goodbye shot that someone took before he went overseas? Was this his coming-home shot? Who took the photo? 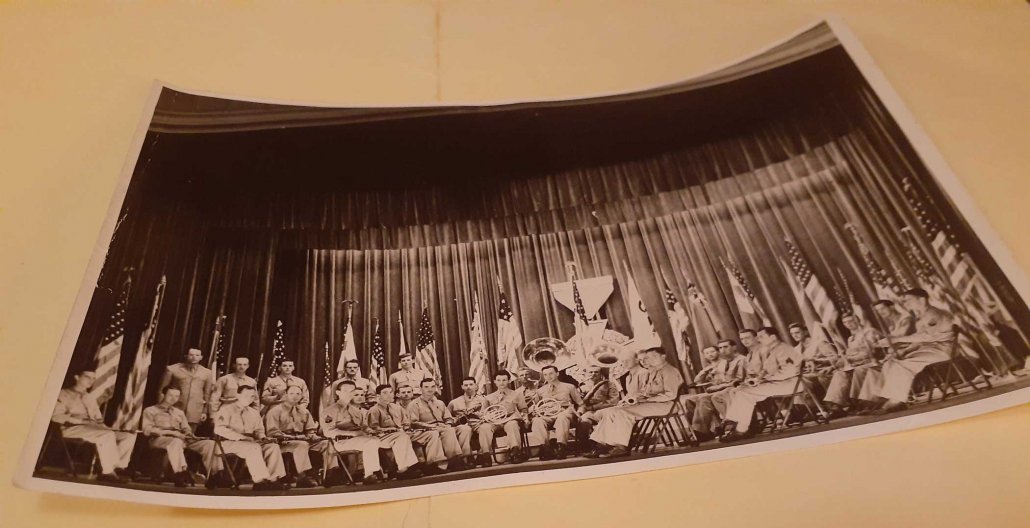 As I riffled through the box, more and more memories resurfaced. We always had a piano in our home—my dad had been a gigging musician before using the G.I. bill to get a teaching degree. And there it was: a black-and-white image of the Army orchestra. I’d heard he also played the calliope, although I couldn’t make out whether it was resting on the stands or not.

I also remember his bittersweet story about his musical foray. For a while, the musicians were treated exceptionally well and even got to eat at the general’s quarters, but one day, when my father made a terrible mistake, he had hell to pay.

He’d always been a self-taught musician. In fact, since his family could only afford lessons for his older sister Molly, he’d hide behind the door to get some tips when the teacher came over.

But while he was in the Army, a general asked my dad to accompany an opera singer. My dad was too embarrassed to admit he was a poor sight reader, so he tried to follow the singer’s melody by ear.

The general didn’t know how the arrangement was supposed to go either, until the singer complained that the music wasn’t in her key. Well, my dad was pretty skilled at transposing popular music, but here, he was completely stuck. 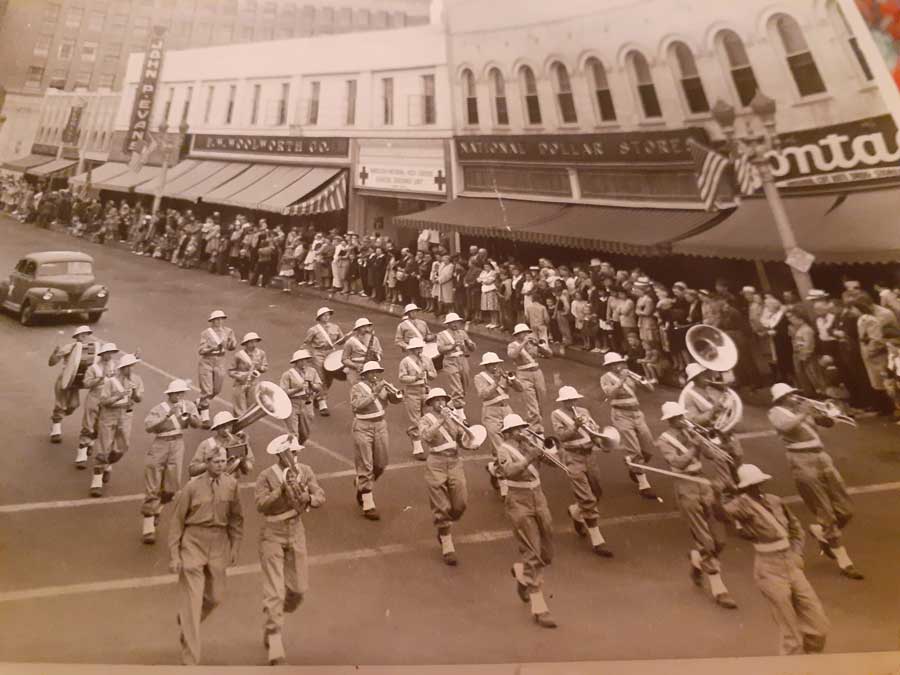 A military band marches in Pomona, California. Lisa Torem found the photograph in a box of her father’s belongings. Photo courtesy of the author.

So, he simply moved the same chords he’d been playing up a few octaves, just so everything would sound “higher.” By this point, the opera singer was completely flustered and the general was furious. And if that wasn’t bad enough, another official got word that my father was a fast typist. Both factors pointed to his exodus from the breezy life in the general’s quarters. He went back to making sour faces at his metal plate in the mess hall.

But I was on a roll. I learned incredible things about WWII. I discovered that hospitals in my very city had been places where soldiers underwent medics training before they went overseas. A Vietnam veteran friend drove me past a local VFW post where he often spent Friday nights and explained the camaraderie he felt with his long-term buddies.

I even discovered that one of my dad’s best Army friends, a man named Irving, went to war with his own sibling. That brother ended up writing and producing Hollywood musicals and traveling with Irving Berlin. In fact, an actual Army record had been recorded using American soldiers in lively songs with lyrics like, “Oh, how I hate to get up in the morning.”

But here was the biggest and best surprise of my newly acquired life as an enlightened veteran’s daughter: My father had been part of the 13th General Hospital. When I found that out, I was still pretty green about what that moniker meant, in terms of logistics and basic geography.

But as luck would have it, a dedicated group of soldiers from that unit got together postwar to humorously describe in great detail what this incredible group accomplished. Sprinkled throughout the text, which I was able to easily access online, were anecdotes about specific soldiers and nurses.

I also discovered that I am far from alone. Surfing the web, I found hundreds of descendants who, like me, are eager to learn what our loved ones accomplished and endured during the war. And although it’s too late for us to hear their testimonials firsthand, there is comfort in knowing we are not lone wolves.

It’s funny to think that the treasures in that rusted box could have easily been discarded when my mother packed up the house. They might have ended up in a landfill, or simply left behind in my parents’ garage in California, the same state where my father’s wartime adventure began. But I’m thankful that my mother’s actions led me to “think outside the box.” 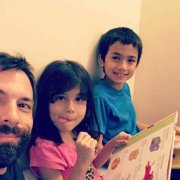 A Tramadol Overdose, Delivered by Mail. “I Was Addicted. It Was Easy to Get Them.”

“They Didn’t Make It?”—When Your Brother’s Homecoming Starts in a Burn Ward
Her Willingness to Speak Truth in Spite of Fear Left a Lasting Impression

While Americans See an End to 20 Years of War, VA’s Job Has Just Begun
Scroll to top