I was the only one sitting at the bar, my back to the entrance and a beer in my hand. But I saw him walk in, through the mirror that hung on the wall behind the rows of liquid courage and bottled vice.

He sat to the left of me, with one chair between us, and ordered a Chivas on the rocks. I looked at him, and he at me, through our reflected images on the glass. I had no clue who he was, but there was something palpably familiar about him, and it didn’t stem from the fact that he looked like Sam Elliot portraying Virgil Earp. 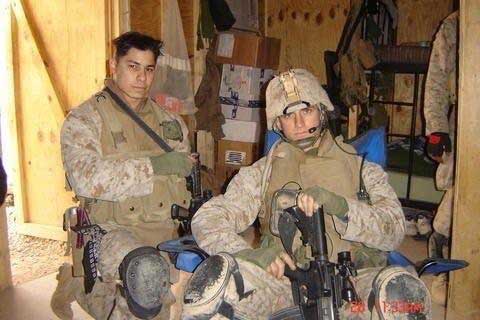 Despite the wide-brimmed Stetson and the anachronistic, flowing mustache, the familiarity came from the realization that he was not just looking at me: He was sizing me up. He discreetly watched my every move, and when my eyes happened upon his, we both glanced away. And I realized that I was sizing up this old man, too.

He was calm, in complete control of himself and the entire room. Yet underneath the stoic visage and the aquiline eyes was an echo of circumspection: a wariness, from a wayworn soul.

Almost imperceptibly, his eyes moved constantly. He looked over his shoulder in the mirror at whoever walked through the door. And those sun-beaten slits shot from side to side as he lit his cigarette.

He would not break the silence of his own volition, in part because of pride, but mostly out of caution. So, I decided to shift left, into the empty chair that represented our invisible boundary line.

His face froze while he glared at me in his peripheral vision. 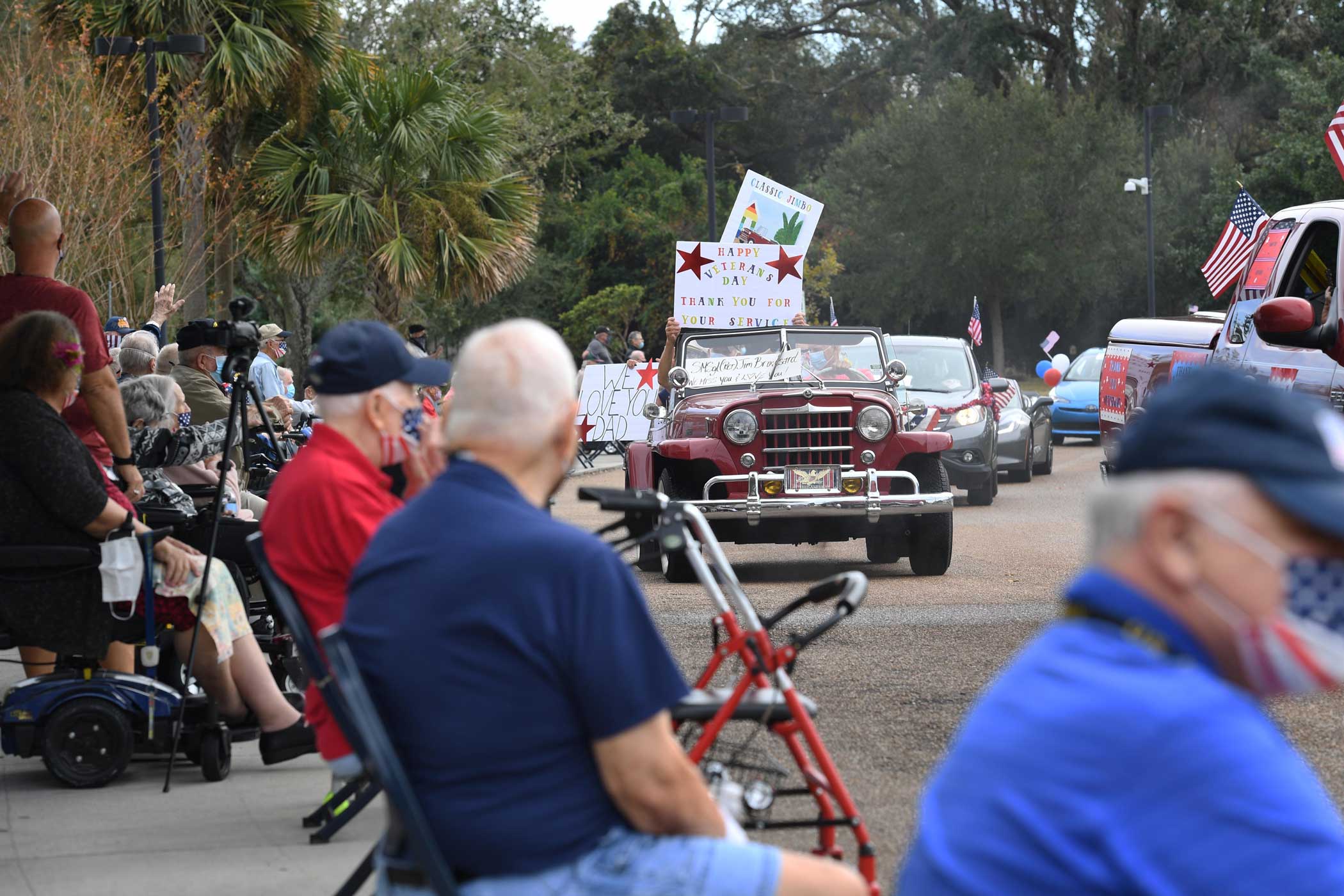 Gulf Coast veterans participate in the Gulf Coast Veteran’s Day Roll-Thru and Wave Parade outside the Armed Forces Retirement Home at Gulfport, Mississippi, Nov. 7. Keesler Air Force Base leadership participated in the parade in support of all veterans past and present. Photo by Kemberly Groue, courtesy of the U.S. Air Force.

He turned to me. When my eyes met his, I could see that he wasn’t looking at me; he was looking through me.

“What was that?” he said, wrinkling his leathery forehead.

“Who do you work for?” I repeated.

“I’m a federal marshal. You in the military?”

“I’m never wrong about that. … ” he grumbled, stroking his mustache and turning back to his cocktail.

“I just got out of the Marine Corps, and I’ll be starting the police academy real soon,” I said.

“No shit,” he said “I knew it. I don’t normally tell people what I do. The only reason I’m talking to you is because I saw you sizing me up.” He took a drag of his cigarette.

“Funny, that’s the only reason why I spoke to you,” I said, half-smiling.

That was the beginning of a conversation that lasted roughly an hour and a half. We spoke of many things—not just the same old war stories two fighting men inevitably tell each other; but the real, deep-down-inside stuff that warriors know but no one else can easily understand. Like, why we served and will still serve. And why have we done it for the better part of our lives.

He told me his military history, of parachuting in on D-Day and then volunteering to fight the war in the Pacific when Hitler’s Reich fell. He told me about getting out of the Army and then getting recalled to fight in Korea. He was part of the legendary Marine Corps battle at the Chosin Reservoir, the mythical “Frozen Chosin,” as we’re taught.

As an artillery forward observer, he got separated from his unit during a rapid enemy advance. After a chaotic fighting retreat, his small cadre of soldiers found themselves cut off. Out of necessity, they joined the closest unit to their positions, which happened to be a Marine battalion.

“I was stuck with crazy Goddamn jarheads for weeks!” he said, and laughed.

He also told me the story of how he lost his finger during a battle. He and his friends dug through the sand to find it. He had it sewn back on at a MASH unit, and then he went right back into the fray.

But even more amazing than his exploits was that he wanted to hear about mine and even pushed me to tell him when I was at first hesitant.

We found that, even though my adventures paled in comparison, we had a lot in common. We were both recalled into the military. We both volunteered specifically for combat tours, even though we had already served our time. Just as in my family, all his brothers were in the military. He went into law enforcement when he was finished with the Army, finally telling Uncle Sam to piss off when the Vietnam War started. And when I would tell him about a specific instance in battle where everything seemed utterly fucked up, he would burst into laughter and slap my back: “Shit never changes! War never changes. … ” 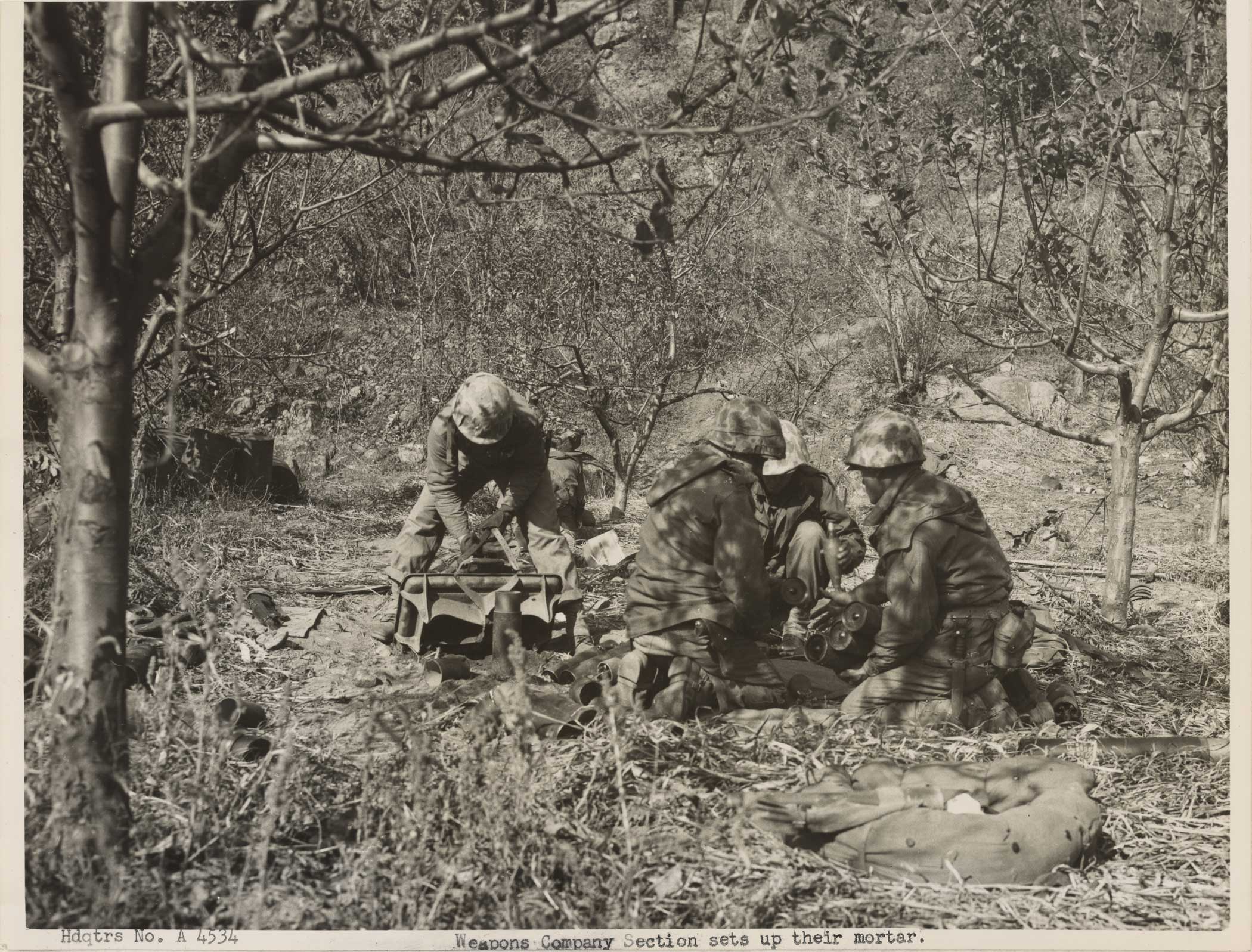 A Marine Corps weapons company section sets up their mortar to take communist positions under fire near Chosin Reservoir. Photo by Katie Lange, courtesy of the U.S. Marine Corps.

When the laughter subsided, we turned to our drinks and looked at each other through the mirror again, but this time with curiosity rather than suspicion. We had walked in each other’s boots, down the same beaten and treacherous paths.

“You can never get comfortable,” he said. “If you’re comfortable, if you think you’re good enough …”

He nodded and took a drink from his glass. His crows’ feet became more apparent when he smiled from underneath his mustache. I smiled, too, and put a cigarette in my mouth. He flipped open his Zippo and offered me the flame. I drew it in and blew the smoke out of my nostrils.

“You’re making me miss the Corps, you old bastard,” I said.

“You did your time, don’t go back,” he said. “I didn’t, but I still serve. I’m a patriot through and through. I’m 78, and I’ll serve till I can’t wipe my own ass.” He took a sip from his glass and smacked his lips.

“All the respect for you, sir—you’re what us young guns look up to,”” I said, smiling and grasping his hand.

He wasn’t John Wayne or Johnny Rambo. He wasn’t Wyatt Earp or Doc Holliday. He was what Hollywood had imitated for so long, and what most men really sought to emulate. He was a true warrior, without want for glory, content in living and serving.

He finished his drink and stood to leave.

He walked out the door, away from his past. And I sat in silence watching the future leave the room. We didn’t even ask each others’ names, but such trivialities didn’t matter; I knew who he was, I had known him for most of my life. He was my father, my brother, my teacher, and my comrade in arms.

No Really, How Are You Doing? Asking Important Questions About Military Suicide
“Everybody We Deal With Is Trained to Kill”—Why Don’t We See Widespread...

“I Screamed Into My Radio to Ignore the Order”—Pardoned Soldier’s Comrade...
Scroll to top