Out of the blue, a Marine calls me.

The last time I saw him he was being evacuated by helicopter, days before we were scheduled to redeploy. His platoon commander and I sat poking at a hot-ish meal in what we called our eating area. We heard a distinct thud and soon heard the report on the radio: A Marine had stepped on an IED. Before I knew it, the platoon commander and I had donned our kits and run out of the base. We ignored protocol: no straight line, no sweeping, no counter-IED measures whatsoever. We just ran.

I don’t remember how that day ended.

The Marine ended up losing his leg. He wanted to talk about “the day.” Not that day—a day a few weeks prior.

A few weeks prior, second platoon, the main effort of our company-sized operation, led a patrol south of our FOB—which happened to be the home of battalion headquarters. We were situated in the middle of the Sangin green zone, so named for the vegetation nursed by the Helmand River. Even on a clear day, we could see no farther than 100 meters ahead of us because of the thick brush and trees. 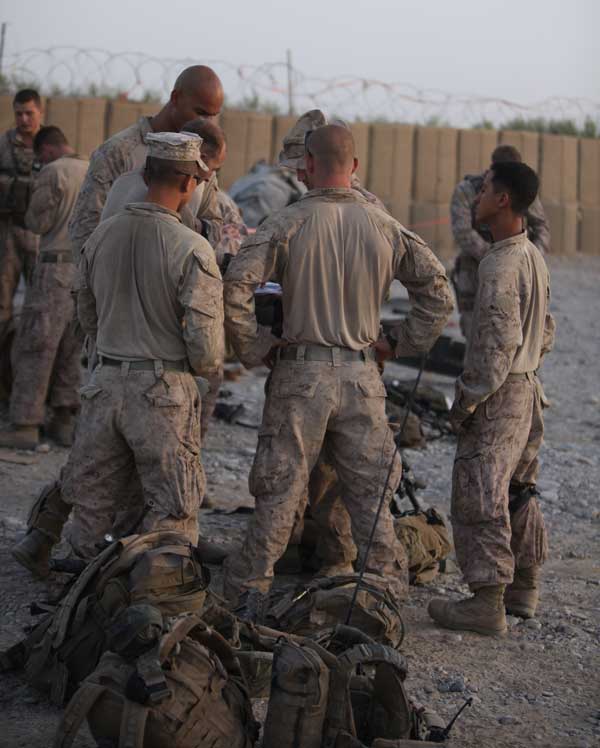 Platoon leadership briefs the team on a mission. Miko Yoshida, far right, listens with the other Marines. Photo courtesy of the author.

Prior to stepping off, we had an operational briefing—a full performance for the battalion leadership that featured terrain models of the area we were to patrol, where the units would be situated, and how we would provide fire support with mortars, artillery, and aircraft. I remember this because up until then, our patrol orders had been “go make contact with the enemy in this area and report back.”

READ MORE
Armed Only With Colored Flags, He and His Fellow Marines Combed the Wreckage Site

Our patrol was comprised of the grunt platoon with attachments, like me, the forward observer, and engineers, as well as our partnered Afghan soldiers—“partnered” being the euphemism used to show we were working to hand over security responsibilities to them. We also had a random assortment of tagalongs: combat camera (the Marine Corps’ photography unit), psy-ops (psychological operations, or the Marines who try to influence hearts and minds), intelligence, and a random Army sergeant major. 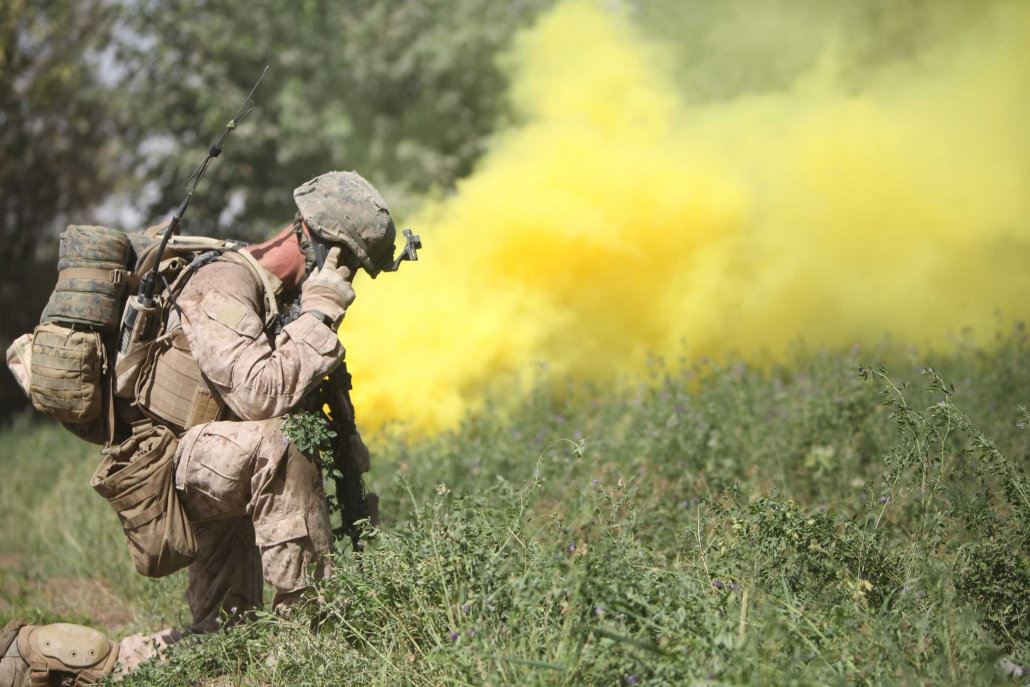 A squad leader gives a radio update behind a smoke screen. Photo courtesy of the author.

We had spent a good part of the month prior patrolling, wandering through the green zone, sometimes getting shot at, rarely seeing the shooters. We were all sick of it. So that day, when one of the engineers up front took a bullet in his pack, the Marines got online and shot back, unloading everything in their arsenal, including their M4s, M16s, M249s, M240s, M203s, AT4s, and SMAWs. One of the team leaders stood as if asking to get shot and directed his team’s rate of fire across the canal.

After or during the initial volley, the squad on point entered a building that would have provided some cover from our supposed enemy. But upon entering, one of the Afghan soldiers set off an IED. It took his legs along with both legs of another Afghan soldier. Our guys, the Marines, ended up with concussions and shrapnel, and we threw smoke grenades to cover their egress out of the building and back to our position.

But the two Afghan soldiers looked like the top halves of Lego men. The Marines and medics applied eight tourniquets, two for each stump. A chaotic sequence of events followed that included coordination of air support, evacuation by foot, and sustained fire, which ended with a danger-close bomb and a gun run. 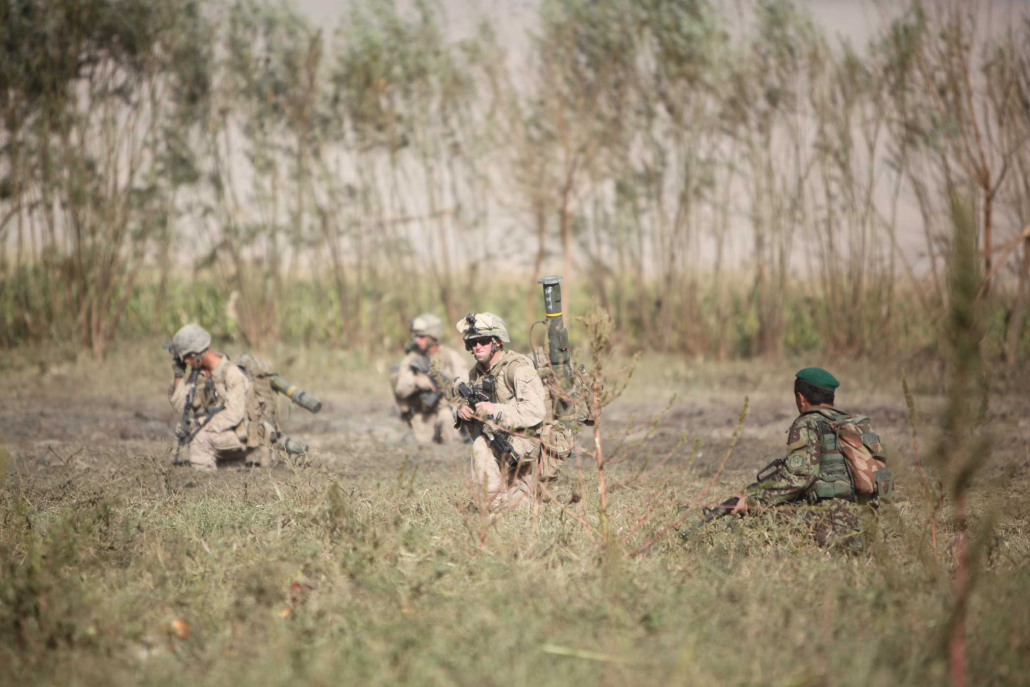 A team sets off on patrol with Afghan counterparts. Photo courtesy of the author.

Later, the combat camera team sent us footage, spliced with graphics and slo-mo, that was set to Spiderbait’s version of “Black Betty.” The whole scene plays out like an epic war-porn trailer.

As I recalled my version to the Marine on the phone, I regressed back to the Marine I used to be: cursing more, speaking in a sardonic yet intense style. But I also complained about being yelled at by our sergeant major for wearing issued cold-weather gear when it was cold, among other things. That sergeant major would later ascend to the highest enlisted billet of the Marine Corps.

In the past, I’ve generally enjoyed commiserating with Marines—the irreplaceable comfort gained from talking about our shared experience. It affirms we were there. We were men. And we did our jobs. At least that’s what I used to tell myself.

This time, a certain bitterness came up. Maybe it was the memory of the intense chaos of that day; maybe it was the reminder of who I used to be and how I used to think. I wished I could take back some of the words I uttered both on the day and on the phone to the Marine.

There’s more to that story, like the moment when an F-18 dropped a GBU-38 and I second-guessed myself, thinking I could have given the wrong coordinates. I imagined the 500-pound GPS-guided bomb that was supposed to land 125 meters away would instead land on us, and I would be known for killing an entire platoon of Marines. Our company commander jumped on the radio every few seconds to get a sitrep (situation report) while we coordinated medevacs and close air support. Two Marines used the Afghan casualties’ arms like pack straps and carried the legless soldiers back to base. At the conclusion of our mission a few days later, we dug in 200 meters from the FOB—between the presumed enemy and the HESCO barriers. We were so close we could wave to the Marines on post as we shivered in the cold. 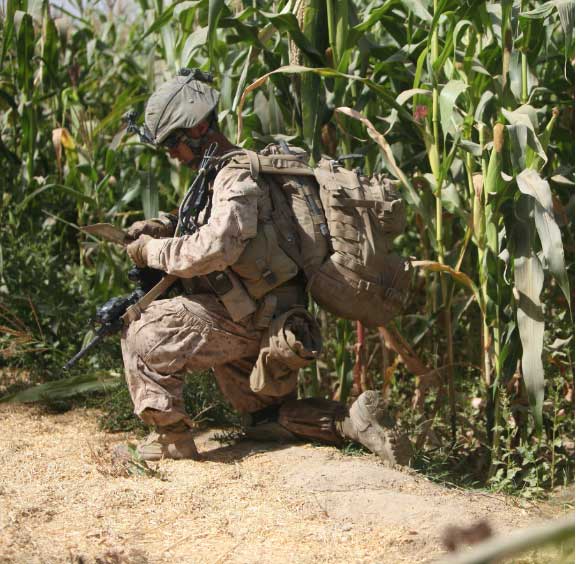 First Lt. Yoshida on patrol in Sangin, Afghanistan, in September 2010. Photo courtesy of the author.

I omitted things, too, like the shame I feel when I think about how I must have sounded on the radio that day. As gunfire erupted around me, I shouted at the top of my lungs into the handset. Back at headquarters, everyone had heard my desperation. I had forgotten the No. 1 rule: Sound cool on the radio.

I also, when telling the story, didn’t mention that I couldn’t see where the fire came from and that I had to rely on the Marines pointing out buildings and places in the trees for me. Or that I felt like we responded to an IED with a bomb, the perpetrators probably long gone from the area, and that, at best, we killed a few opportunists who could shoot at us from afar.

The process of recall is nonlinear and, with time, evolves. Our subsequent experiences layer the original event, forever muddying the pure memory. I can’t look at the top half of a LEGO piece my nephew hands me without thinking of those amputee Afghans. A three-legged dog in the park takes me back to that day. And even though I had not yet ever heard the song, I associate “Black Betty” with that day and that day only. 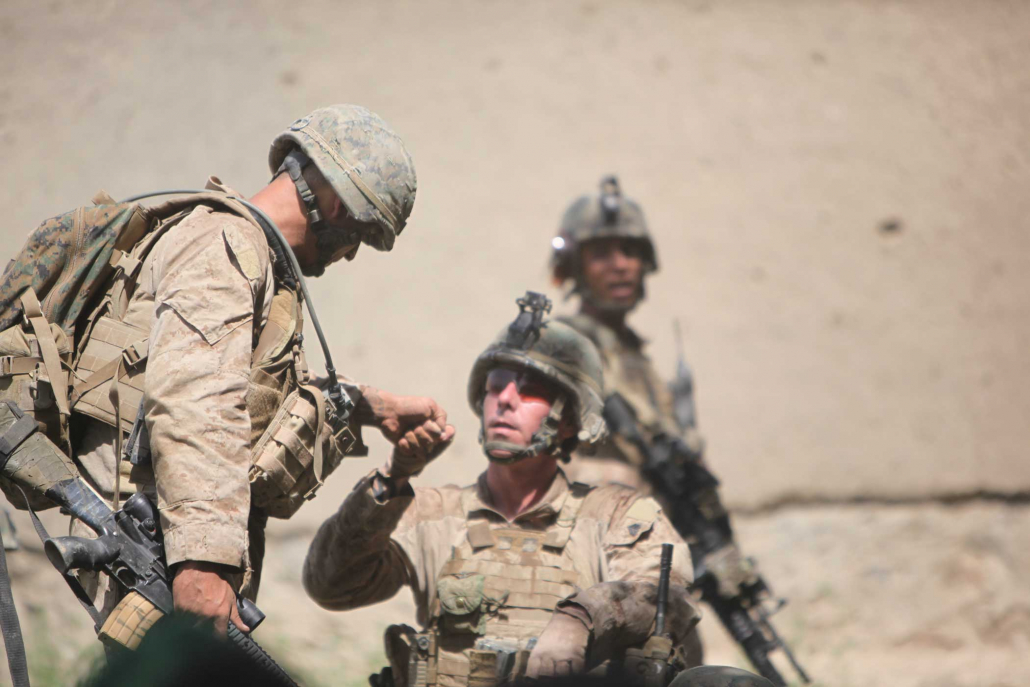 As the years pass, more details fly into the area of my brain reserved for this specific story of this specific day: how baggy my pants were because they ran out of my size. How in the combat camera pictures, I look like a kid playing Marine. That I sketched a commemorative battle diagram on the back of an MRE box and gave it to my friend, who was the platoon commander. How I felt embarrassed for getting an award, while he, the platoon commander, received nothing for that day or that deployment.

We met up, five years later, as we entered corporate America in New York. Sitting at a midtown diner on 7th Avenue after work, we commiserated about the financial industry, and, inevitably, “that day.” 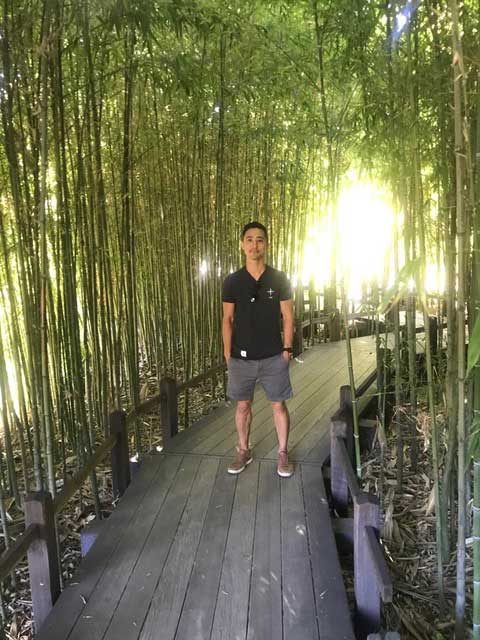 Miko Yoshida at the Botanical Gardens at the Huntington Library in Los Angeles in 2019. Photo courtesy of the author.

“That day” would be a fine story if I could give an easy, accurate account of it. Even with the chaos, a better storyteller could probably make it sound better—movie-worthy, even. It would be comforting if I could talk about it with the people I’m close to, to share the burden, maybe. Instead, we talk to each other. We don’t belabor the details, we just talk about how the whole ordeal seems incredible. We talk about the courage of the Marines. And we always arrive at the place on the map, Sangin, which is now back under Taliban or insurgent control. The discussion mostly stops there because what is there to say?

How do we make sense of a time that didn’t make sense? Are we compelled to do it? Or are we able to accept the things that don’t make sense and move on? Perhaps this is what faith is, and if it is, I lack it. I want to put this memory into its cubbyhole, neatly, and pull it out so that I can recall it for anyone who wants to hear. I don’t want to have to explain myself—explain why we sacrificed so much time, sweat, blood, and tears for that ground. I don’t want to have to change the story each time or doubt myself in the way I tell it. But until it makes sense, it will change and I will doubt myself.

The Marine who called me was a team leader then, probably not yet 20 years old. He received the Silver Star for “that day.”

A few weeks after, on the day he lost his leg, he would speak calmly into the radio handset.