There are two types of people in the world: dog people, and everyone else. I am a dog person. Some people might call me a crazy dog person. There are photographs and paintings of my dogs in every room of our house. They have the run of our furniture and our bed. In the past, I’ve convinced my husband to plan our pre- and post-deployment vacations around where our dogs will have the most fun, usually a mountain lake somewhere close enough to drive from our current duty station. 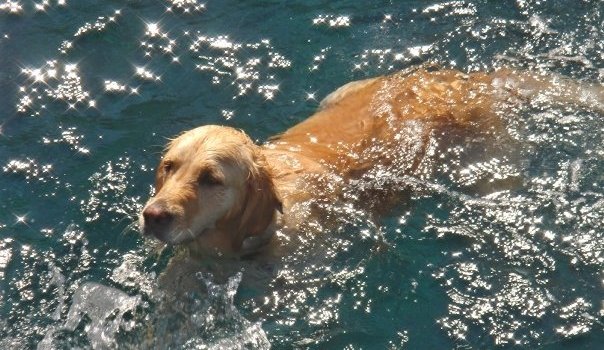 I wasn’t always a crazy dog person. I grew up with horses and spent all of my free time at the barn. As a teenager, I would have slept there if my mother had let me. But, inevitably, that changed when I fell in love with a Marine. After three years and two deployments together, he asked me to move with him from California to Germany, and so I left my horses behind. At his new billet, Tom worked long hours and traveled half the month or more. We weren’t married yet, so most of the Marine’s wives we were stationed with didn’t want anything to do with me. They called me a “stowaway,” and shut their doors in my face when I tried to deliver Christmas cookies.

READ MORE
I Lost One of My Marines to Suicide. Maybe Being Honest About My Blind Spots Will Help.

Although I enjoyed Frankfurt, and had made a few friends out in town, I was lonely. I was only 22 and relatively poor, and because I wasn’t eligible for a work visa I didn’t have a job. So, I spent hours on my own exploring the endless green spaces, parks, and urban trails that crisscrossed the city. Free entertainment and exercise all in one. But the truth is, I forgot who I was when I began spending too much time alone, and within three months I began considering moving back to the States. 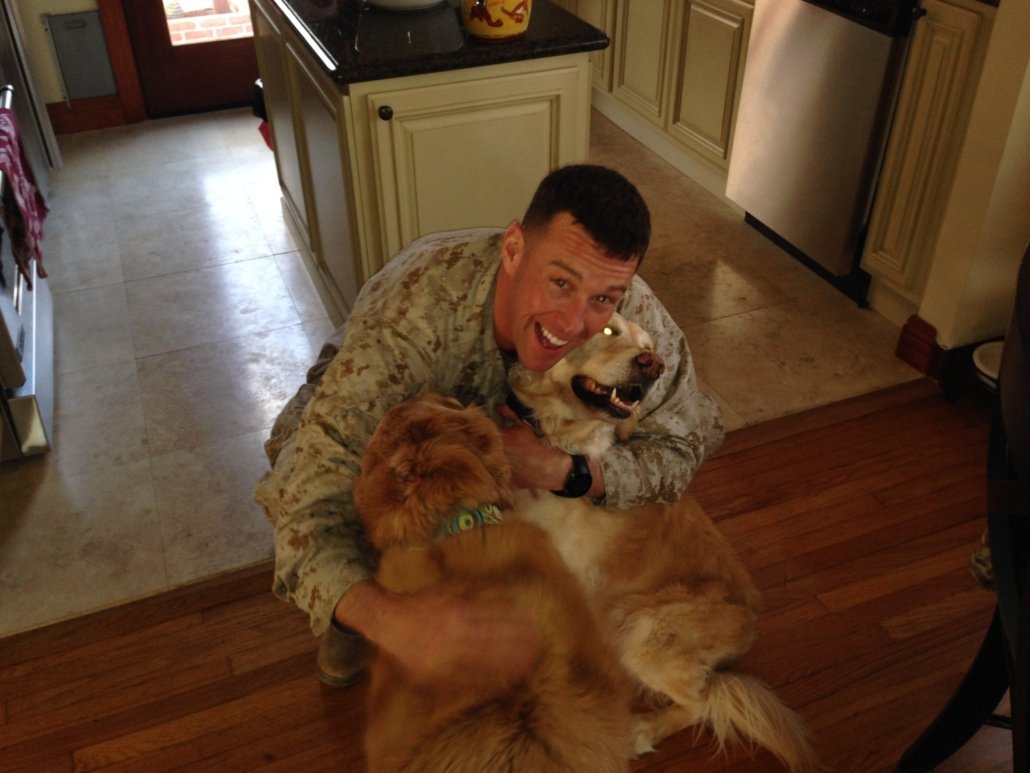 Tom with the couple’s dogs. Courtesy of Liesel Kershul

That’s when Tom suggested we get a dog. We had both always wanted a Golden Retriever, and when I pulled up the classified section of Stars and Stripes on my computer, there just happened to be a 10-month-old, female Golden available for adoption on an army base in Heidelberg, less than an hour from us. It seemed providential.

We rented a car and drove south the next morning. On our way there, Tom reminded me that we were just looking. We entered the apartment, cozy and homey in a Cracker Barrel sort of way, all Yankee Candles and polished oak furniture, and sat down on a squishy brown corduroy couch. There were four dogs in the house—three Goldens and a Yorkie—but it was the pretty, honey-colored Golden who caught our eye. The other dogs were cute, but she was perfect. She had large, brown eyes that seemed to emit love-bubbles when she looked at us. Her fur was soft and silky and just the slightest bit wavy. She was also the friendliest dog in the house. She trotted right up to Tom, sat down, and put her paws in his lap. We couldn’t believe our luck when the owner told us this was the dog we’d come to see, and apparently she had decided that she was going home with Tom. He didn’t even glance at me. He said he’d be right back, that he had to go to the ATM. It all happened in the space of a few minutes. 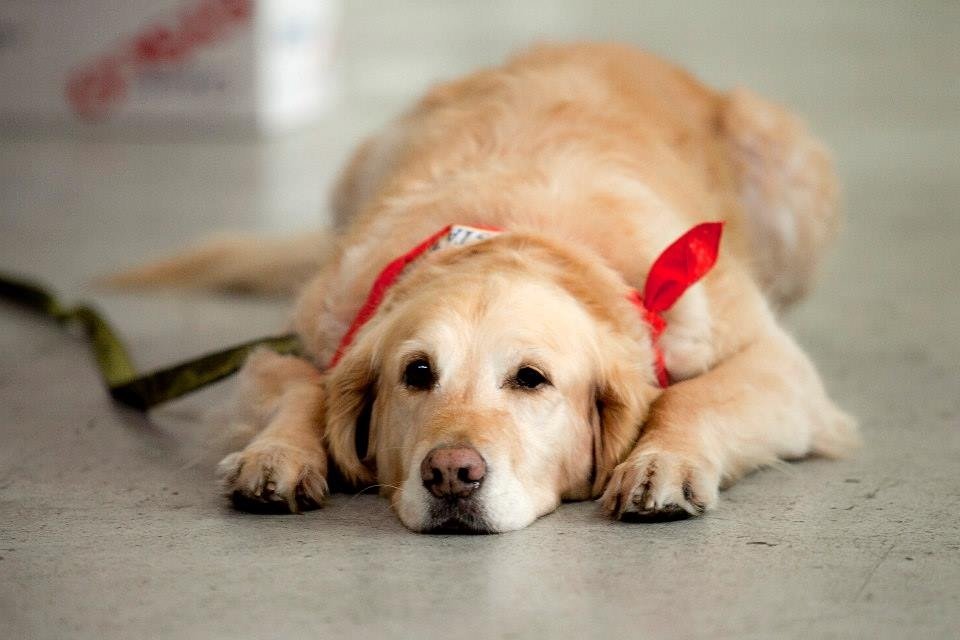 We named her Amber, and stopped on our way home to Frankfurt to take her for her first hike in the Taunus Mountains. She romped in what was left of the snow, but didn’t go more than 10 feet away, seemingly uncertain about being off her leash and allowed to chase the squirrels. I was a bit of a helicopter parent, worried that she might run off if her nose picked up an interesting scent, but Tom just laughed and told me to relax. She wasn’t going anywhere. And he was right. She was by my side for nine years, seven moves, and two deployments. Those first few years, she helped me make nearly every friend I met in Europe. No one could resist her sweet, smiling face.

One night Tom and I got into an argument. I don’t even remember what it was about, but my initial, admittedly juvenile, reaction was to want to run home to my parents. Amber was the reason I stayed. Her fuzzy ears, wet nose, and insatiable joy manifested in a constantly wagging tail.

She looked at me with her big brown doe eyes as I threw clothes into a suitcase, as if to say, “Really? You’re going to leave us?” It wasn’t the last time she kept me from doing something stupid. 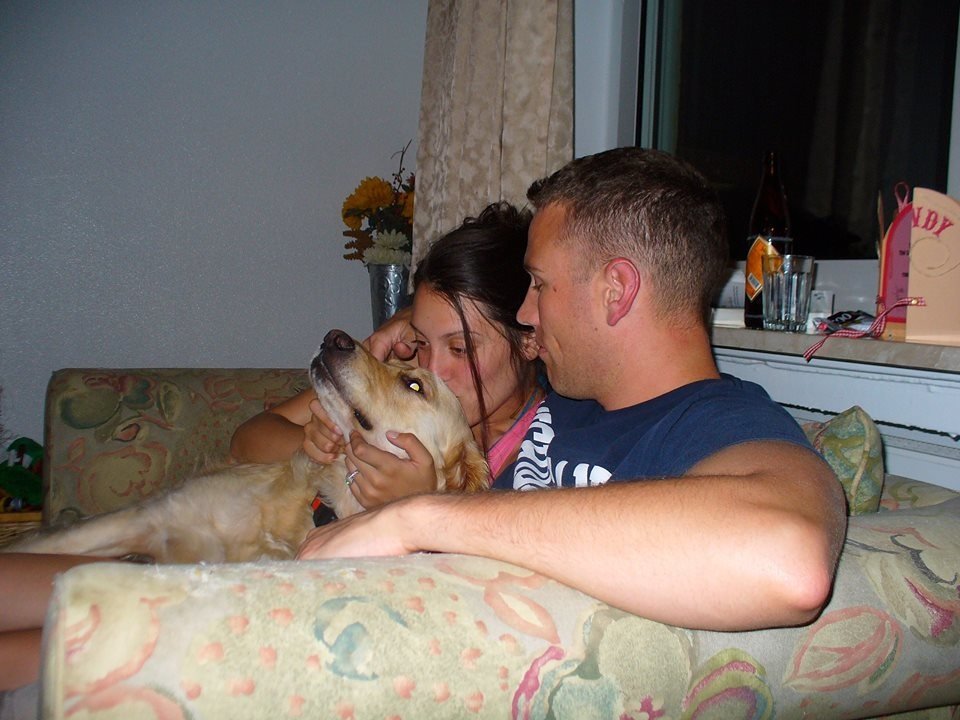 Liesel and her husband, Tom, with their dog, Amber. Courtesy of Liesel Kershul

In 2010, Tom left on his third deployment. We had orders to the west coast when he returned, so I decided to move out to California early and spend a few months with my family while he was gone. It was right around the holidays, and because his unit left two days after Christmas, I was more emotional than usual. I packed everything I thought I’d need for the next eight months into my Prius, loaded up our dogs (by then we’d rescued a second Golden), and dropped Tom off on base before heading across the country. I didn’t want Tom to see me cry, and I managed to keep it together for a few miles on the highway before I pulled over and sobbed. I remember she nuzzled my ear, and then rested her furry chin on my shoulder. It felt like Amber was telling me not to worry, everything was going to be just fine. 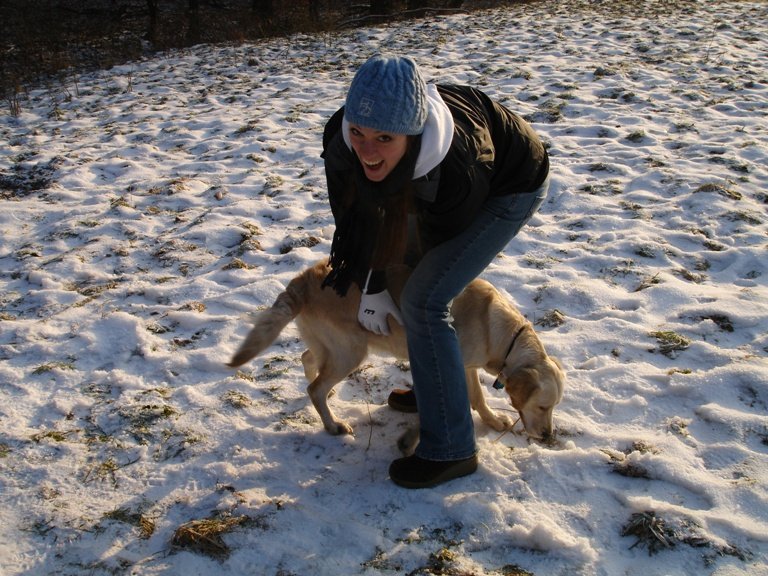 Although there’s a lot about it I love, at times the life of a military spouse has been difficult for me. We’ve moved a lot. Sometimes it’s been hard to find work, and I have a tendency to spend too much time home alone. It’s different for every military spouse though. Some spouses rely on their jobs or their churches or their children to build community. Some families are lucky enough to homestead and lead semi-normal lives, putting down roots in communities they come to love. That hasn’t been my experience. For me, it’s been my dogs who have kept me sane in the crazy life we’re living: the workups, the deployments, the periods of reintegration, the moves.

We lost Amber three years ago to hemangiosarcoma. Cancer. We didn’t know she was sick. She didn’t show it until the day she died.

When I woke up that morning her tummy was full and bloated. She was breathing funny, and I remember my husband looked at me with fear in his eyes. He had to go to work, so I called my best friend, and she drove down to take her to the vet with me. The doctor drained Amber’s abdomen of fluid, and did x-rays and ultrasounds. She told me Amber had a tumor between the chambers of her heart; she couldn’t say how long she would last. I called Tom sobbing and left a message on his voicemail. He was flying that day, but had told me before he left for work that morning to do whatever it took to keep her alive so he could say goodbye. Amber was as much his baby as mine. 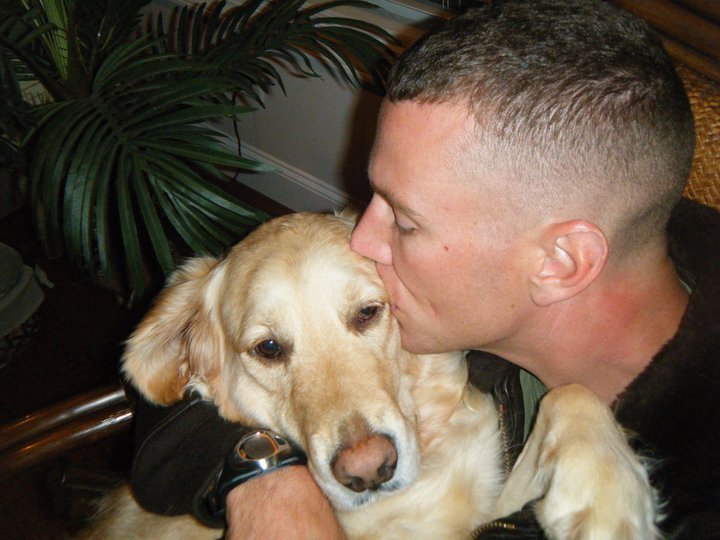 There wasn’t anything more they could do, though. The tumor was inoperable, so the vet told me to take her home and make her comfortable. As I lifted her into the car, Amber had a heart attack in my arms. Her breathing started to labor, and her tongue turned purple and then blue as she thrust it out of her mouth in a howl of pain. Her eyes rolled wildly in her head. It sounded like she was screaming.

I couldn’t carry her back into the office on my own, so my friend, eight months pregnant, went sprinting back into the building and grabbed a vet tech who helped me carry Amber back into the surgery. We lifted her onto the stainless steel operating table, and I cradled her head in my arms and sang to her while the vet shoved needles in her veins and tried to intubate her. Amber couldn’t breathe properly, and she just gagged on the tube.

Time stood still and sped up all at once. The whole thing happened in no more than a few minutes, but knowing she was in so much pain, it felt like hours. And suddenly it felt like seconds when I realized that these were my last moments with her.

I nodded to the vet when she asked me if I wanted to let Amber go. The doctor ran to a small refrigerator and pulled out a syringe. Amber stopped straining to breathe for a moment, and grunted as her head fell back into my arms. I climbed onto the table and spooned her, still singing, while the vet pushed the plunger and the drugs did their work.