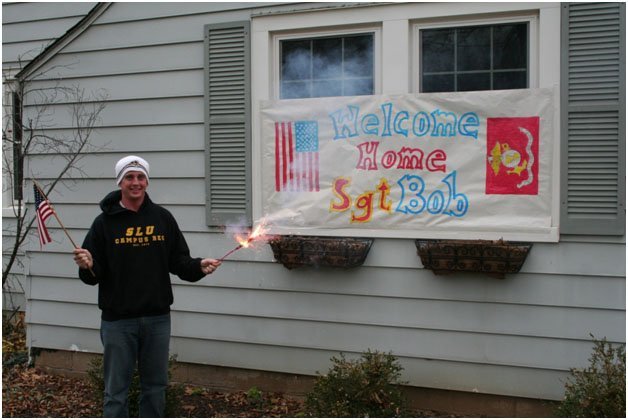 I pulled on my cigarette as Bentley exited the airport and strode toward me. Three days earlier, we’d departed Okinawa for the last time, arriving in California and puttering around Camp Pendleton, waiting on admin to finish processing our end of active service. He had managed to get his flight pushed up, and asked if I would try and do the same.

“Wait here, wait at LAX, makes no difference to me,” I replied. Either way, my flight for Atlanta wasn’t leaving until that evening. “I know the USO here is solid, not so sure about the one in Los Angeles. Might as well stick with the one I know.”

“Alright, brother,” Bentley said, extending his hand. “I guess this is goodbye.”

I shook it and slapped him on the back. “Take care, brother.” 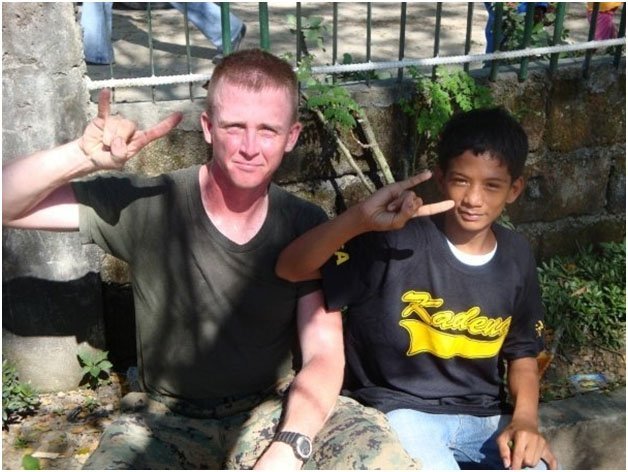 Robert Lucier takes a break to hang out with students while building a school in Guimba, Philippines. Courtesy of Robert Lucier

He turned and headed back inside the airport. I pulled the last drag and deposited the cigarette butt in an ashtray. I’d known Bentley for nearly three and a half years. We had arrived at our unit in the fleet around the same time, and for most of that we’d worked, lived, and trained alongside each other, and when the time came, we’d gone through the entire checkout process from the Marine Corps simultaneously. Our cursory goodbye might have seemed cold to an outside observer used to hugs and tears, but what else should we have said? We’d said goodbye to so many other Marines who had deployed or left the service or lost their lives; tearful goodbyes were foreign.

READ MORE
Opening The Window And Making Love To The World

I walked back inside and headed toward the USO, retracing the same path I had made almost four years earlier when I began my enlistment. The Semper Fi Circle of Life, Marine Corps Recruit Depot San Diego was visible over the fence that separated the airport’s runways from the base. New Marines were being made on the other side of that fence. On this side, I held my DD-214 and headed home for good. 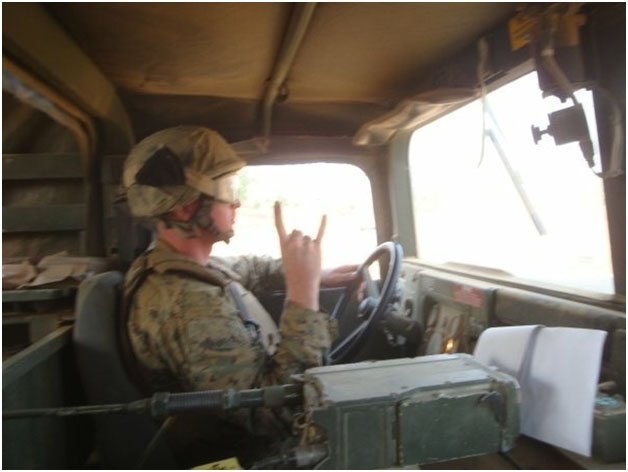 Robert Lucier spent time training in Sukhothai, Thailand during one of his deployments. Courtesy of Robert Lucier

I walked into the USO, said hello and showed my military ID to the volunteer greeter, and signed in to the logbook with my rank, name, and branch: Sgt. Robert C. Lucier, USMC. I was once again amazed at how nice it was, the proximity to Marine and Naval Bases no doubt played a large part in getting the place spruced up. The USO at Lambert International in St. Louis was a closet with free coffee. Here, there was a large screen TV with couches and recliners, a pool table and a foosball table, free snacks and drinks, and even a side room with Xboxes and PlayStations featuring the latest and greatest video games. I had entertained myself for hours and hours over the last four years trying to throw rocks into helmets, slowly perfecting this time-wasting craft. This, by comparison, was not a bad place to kill an afternoon.

I grabbed a bottle of water from the fridge and a granola bar from a basket of snacks, found the TV remote and flopped down in a recliner, switching around in search of any sports channel. I set an alarm so I wouldn’t miss my flight, and promptly fell asleep. My body was still on Japan time, and the middle of the afternoon felt like 3 a.m.

I awoke a few hours later to the sound of yelling. Near the exit to the USO, several Drill Instructors were tearing into a fresh group of recruits seated cross-legged on the pavement. Figuring it would provide some good entertainment, I swung my backpack over my shoulder and went outside, took up a position 30 yards away from the recruits, and lit a cigarette. It struck me how young they all looked. I was a grizzled salty dog, all of 24 years old. I took a particularly satisfying drag, remembering that none of these poor recruits would be able to smoke or dip for the next three months. 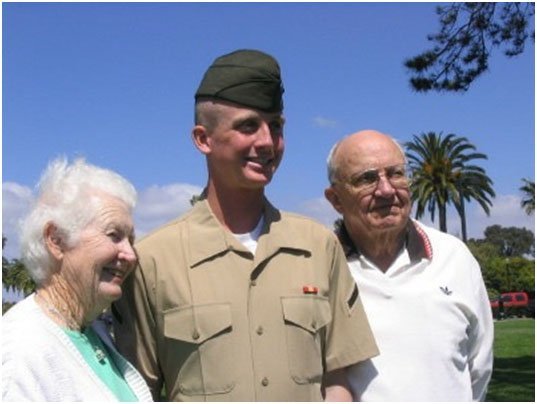 Robert stands with his grandparents, John and Patricia, during Family Day at MCRD – San Diego for boot camp graduation. Courtesy of Robert Lucier

As the Drill Instructors started screaming, “GET ON MY BUS RIGHT NOOOOW!” I couldn’t help but chuckle. It all seemed so very silly. The recruits would be forced to take the ride with their heads down, while the bus took a circuitous route meant to disorient them. They’d get dumped back off again still in full view of the airport. I’d managed to come through that silliness and the craziness none the worse for the wear. Some of these poor kids wouldn’t be so lucky. From where I sat, it was easy to pick out the weaker ones who already looked thoroughly bewildered. A lot of them wouldn’t even make it through boot camp. It was just as easy to pick out the strong ones, who were already taking charge. They’d become leaders. But it was impossible to guess what might happen to the ones who deployed, who might be in the wrong place at the wrong time—hit by an IED, taken out by a sniper. None of that mattered today as they frantically scrambled aboard buses that would take them to the other side of that fence while I looked on and laughed.

I watched the buses pull off and headed back inside toward the video games. The newest version of Madden awaited, and I stubbornly chose to play with the Rams despite how terribly rated the virtual (and real-life) team is. I expected to feel some sort of unease at having my “to do list” for the next two months consist of only two items: buy a car, find a job. Instead, I was awash with relief. I was used to waiting in anticipation of the next task: killing time before PT; killing time before shooting on the range; killing time before formations, meetings, training, delivering, and receiving word of the day. It was odd killing time before… nothing, whatever, before the rest of my life. 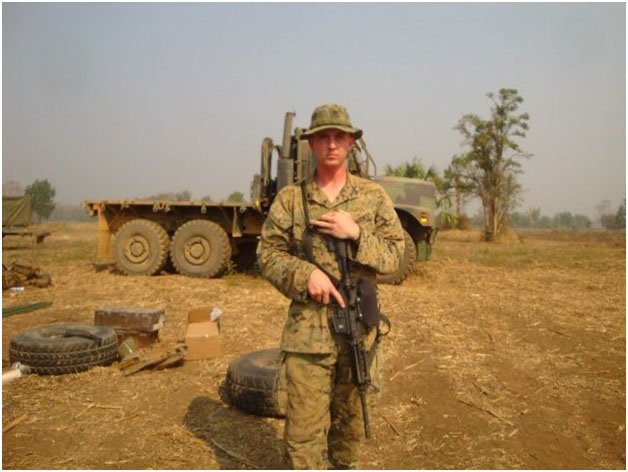 Robert served as a Motor Transport Operator during his deployment to Sukhothai, Thailand. Courtesy of Robert Lucier

I de-boarded my plane in St. Louis the next morning, stretching, and yawning, my neck stiff from having fallen asleep in an awkward position. I had come to this very same airport to depart for boot camp on January 9, 2006. This would be my first Thanksgiving in the United States since 2005.

The sun was just about to peek over the horizon as I strolled through the terminal. A screen on the wall said it was 40 degrees on this fine Thanksgiving day, and I added a third task to the to do list: get a winter coat.

The airport was mostly empty. A stubborn refusal of progress by a city still stuck in the past had relegated Lambert-St. Louis International to second-tier status, but that also meant that it boasted the largest number of smoking areas of any airport in the country. I found the nearest one, entered, and lit up. 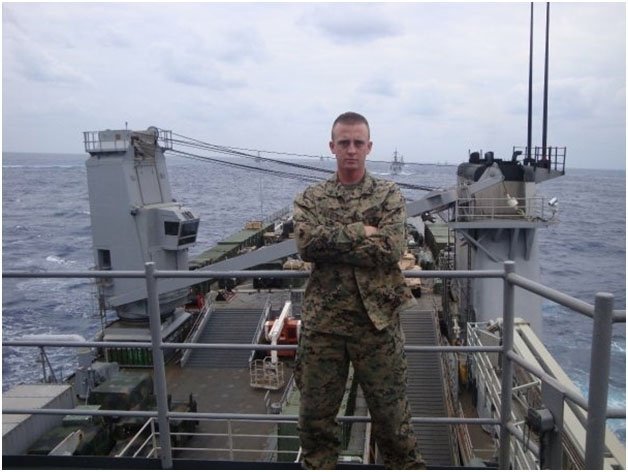 Robert stands aboard the USS Harper’s Ferry flanked by all the ships of the 7th Fleet. Courtesy of Robert Lucier.

I’d been on ship for the last two years, floating around somewhere. It was all a blur. But this year, I’d watch football at a normal hour, and enjoy good food with family and friends. I thought for a moment about my brothers and sisters in arms, all over the world, unable to enjoy the holiday. I toasted the next drag off my cigarette to them; not exactly pouring one out for my homies, but doing the best I could at the time.

I snubbed out the cigarette and headed toward baggage claim, passed through the security doors, and saw my parents and brother. They held a giant banner with an American flag, the Marine Corps’ emblem, and, in giant capital letters, a message: “WELCOME HOME, SGT. BOB!”

The Day I Held My Fire
Scroll to top