I woke to a bump on my knee. “It’s your turn,” my driver said. We had been in Afghanistan for months, in Tagab valley—a bottleneck of activity as the Taliban entered the country from the mountainous regions of Pakistan every spring.

This was Operation Mountain Condor II, and we had been waiting for it for months: a three-day-and-night-long mission where we were to provide blocking action while the U.S. Green Beret Operational Detachment Alpha teams and Afghan commandos funneled the Taliban of the valley to us. We were the backstop, the roadblock in between escape for the Taliban and the elite Special Operations warriors of two nations. 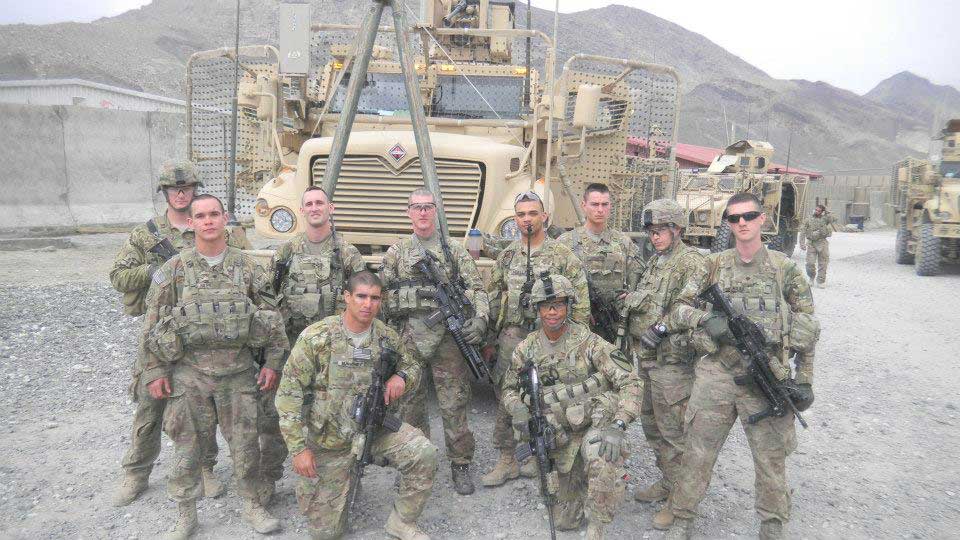 Corbin Chesley, back row, far left, poses with his squad in Afghanistan. Photo courtesy of author.

We were grunts, infantrymen of the most basic sort, hardened by months of patrols and ambushes, yet our training paled in comparison to the giants corralling our enemy toward us. We knew the stakes, we knew the risks, and we couldn’t wait.

For two sweaty days, there had been nothing but boredom, punctuated by distant gunfire, explosions, and calls over the radio with reports of enemy killed and injuries sustained. We stank to high heaven in that truck. Unwashed grunts in our element.

Putting on my armor as efficiently as I could in that small space in the back of our truck, I swapped places with my driver and took back my designated position as gunner, manning the M240B machine gun in the turret. This is the last day, I thought. Then I can go take a shower, relax with a movie on my laptop, and get back into the regular swing of things—whatever that is in a war zone.

Six Afghan local policemen accompanied us, but unlike us, they were mostly dismounted—walking—on the ground, their completely unarmored truck used only as a place of rest between duty. It was a three-day operation, after all. We would often eat meals together, or joke with each other as far as hand gestures and dirty words would take us, what with the language barrier. We didn’t have much in common except a hatred of the Taliban; that was more than enough. 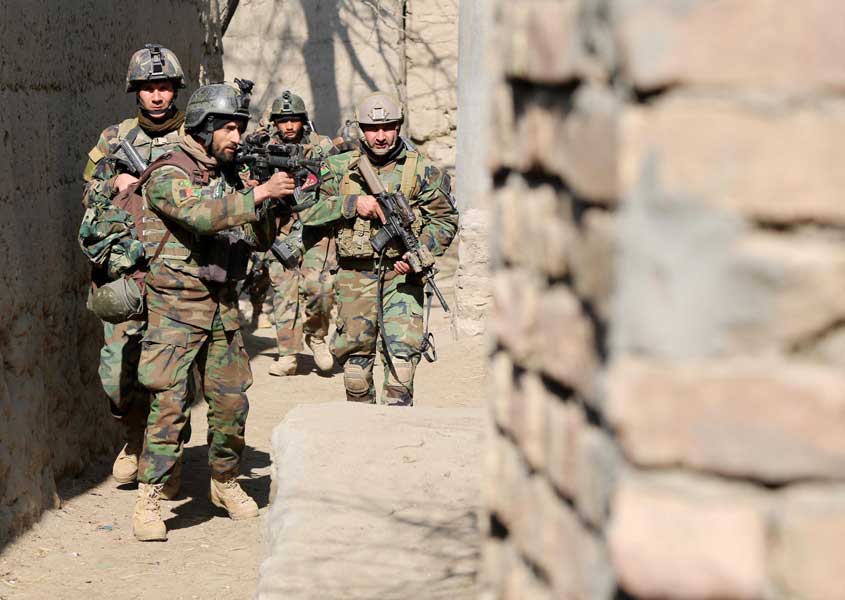 A few hours after resuming my position, gunfire erupted. Without a word, my driver squeezed past my legs in the turret and got into the driver’s seat, ready for whatever this fight might necessitate. Calls came over the radio, asking us about our status. I saw puffs of dust erupt atop a dirt wall barely 200 meters away. I knew this meant someone had rested the barrel of a gun on the wall for stability and cover while firing at us. Not a bad position: clear lines of sight and good cover. 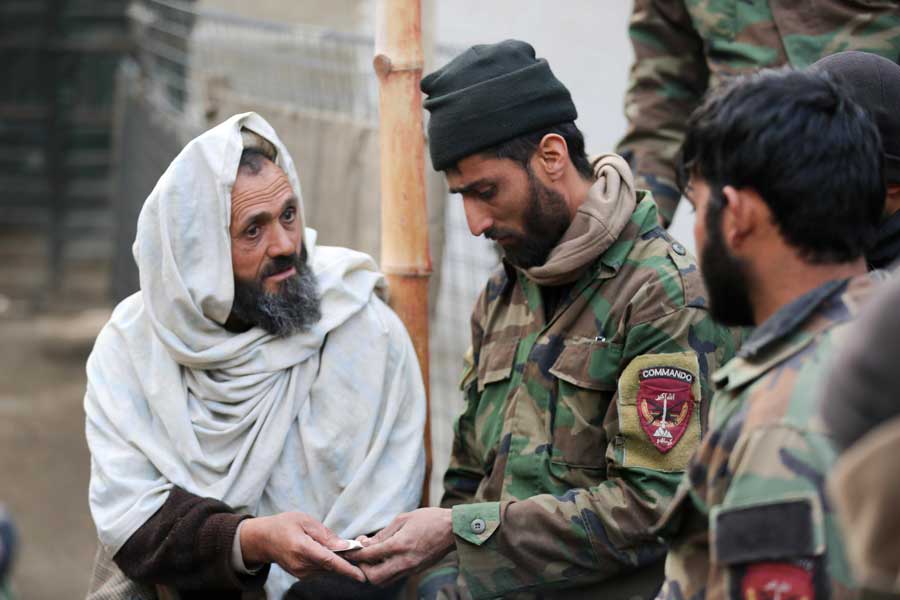 This must be them, I thought. Afghan policemen scrambled about for cover of their own as I began to fire. The acrid smell of gunpowder mixed with the stench of unwashed men and diesel fumes. When, after a minute, I still saw puffs of dust, as well as sporadic firing from the police and the Taliban, I fired two grenades at the wall from the M320 grenade launcher we kept in the turret for situations such as this, hoping maybe to knock it down or at least put a hole in it.

While I had ranged it for 200 meters, I must’ve been slightly off: Both grenades sailed over the wall and exploded on tree branches directly over the heads of where I knew the Taliban to be taking positions. The firing stopped. I had no way of knowing if I had killed them—we weren’t about to get out of the truck and go take a peek over the wall to find out—but I was smugly satisfied that the engagement ended so abruptly after my actions. No thought of pity or remorse from me existed for these men.

After the adrenaline had settled, more radio calls. This time we were told we must leave our blocking position to return to the post of the local provincial government, the district center, to support our Green Berets and help them process prisoners they had taken in their raids earlier in the day. The look of fear on the faces of these local policemen as we left our position is something I will never forget—no doubt thinking to themselves, Why now? We just fought beside you and you helped. Why are you leaving now? The danger isn’t over.

Their fear was justified. Not 30 minutes after we arrived at the district center, we heard more gunfire emanating from the exact positions just down the road where we had spent the previous two days. We had our job, and they have theirs, we told ourselves, thinking that maybe after we were done, we could return to help them.

Soon the firing started to let off. Maybe they won, I thought. That thought soon evaporated as radio calls became more frantic: Another element of the Green Berets had arrived at their position to support them and found their bodies. Six men. Every one of them had been killed; they’d been overrun.

Minutes later, this reinforcing element of Green Berets arrived at the district center, accompanied by their own policemen, as well as another unarmored Afghan police truck with the bodies of the six men stacked in the bed.

The operation was over—raids conducted, prisoners taken. No doubt some Taliban escaped, likely through the hole that was left by these six Afghan patriots who died trying to seal in the Taliban. 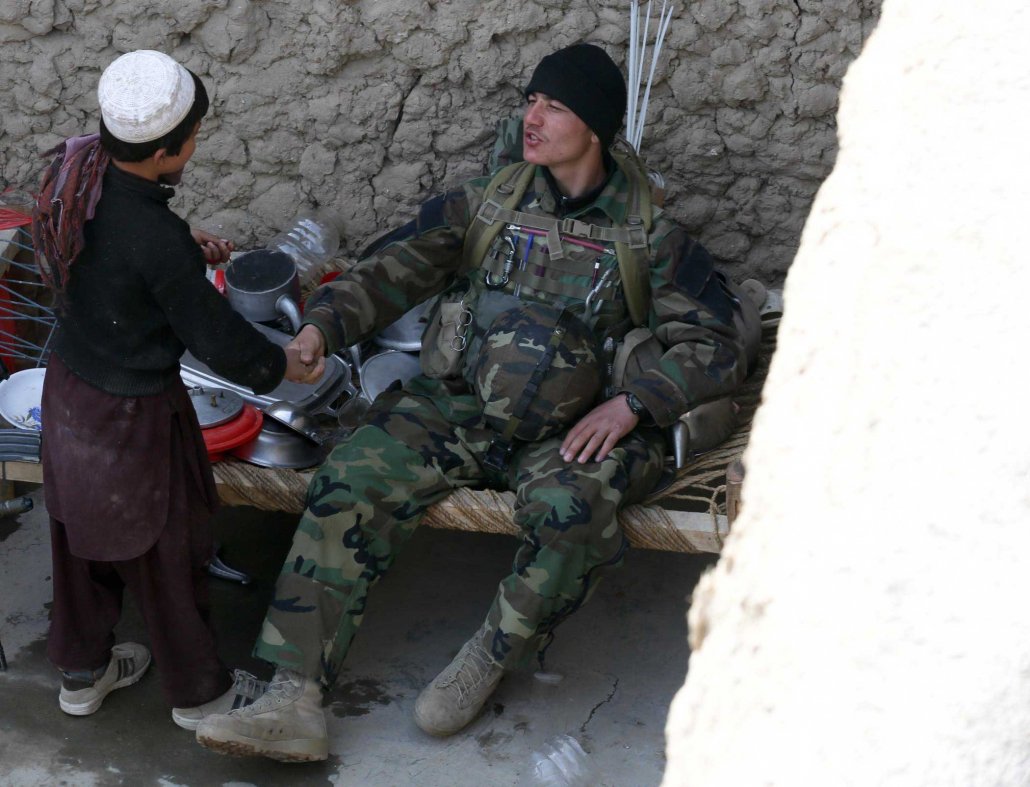 With the raids completed, we completed our part, as well. We drove back to our forward operating base, or FOB Tagab, as it was known. Our vehicle was directly behind the truck full of these bodies, their blood dripping out of the bottom of the bed, staining the road as we approached like some engine leak, leaving a trail back home.

To maintain guard posts, our sister company—Alpha Company to our Bravo—was at the FOB. They had flown in for the three days, replacing us on guard duty to ensure that proper security was sustained. Alpha company had been at Bagram Air Base for these many months. With its coffee shop, its fast-food stalls, its morale and welfare center with computers and gaming consoles, and its PX (post exchange) stocked with goodies, their war had been different from ours. More sterile, more safe. 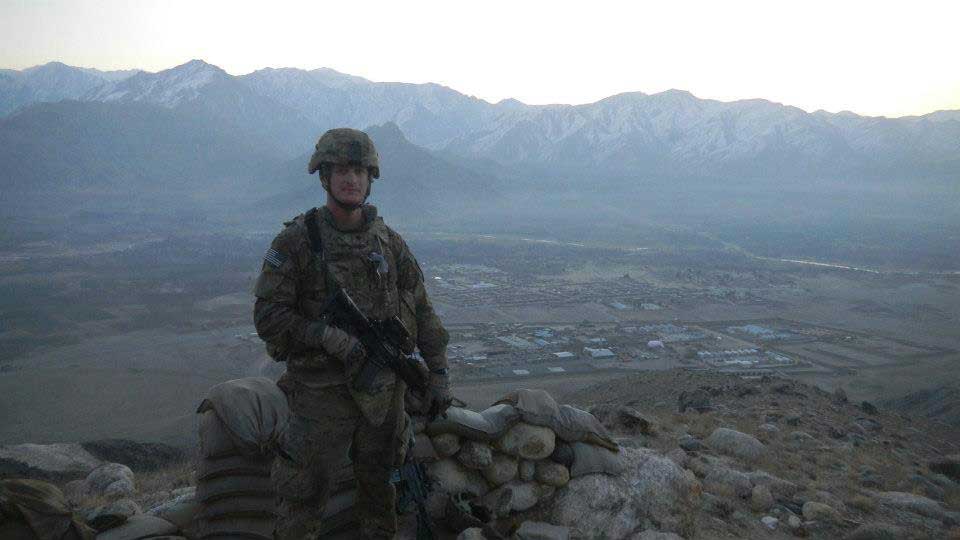 The author stands guard in Afghanistan. Photo courtesy of author.

Yet they were just as capable as any of us: They were infantrymen, and I respected them as much as I respected my own squad mates who had had it rough this deployment. As we entered through the sets of gates, I saw a young man—we were all young, but this guy especially. I had been at the unit for years, and I didn’t recognize him. He must be new, I thought. No more than 19 or 20, he reminded me of myself during our previous deployment—bit of a fish-out-of-water look to him. He waved at the trucks as we entered, showing a little cross-company comradery.

When it came our turn in the convoy to enter, the Afghan police truck ahead of us passed in front of him by no more than a foot or two. As it passed I saw him look. The distorted faces, gore-strewn bodies still trailing blood from the truck, caught his eye. The look of calm and the brotherly demeanor that had been established as he waved at every truck disappeared, replaced by wide eyes and a cold stare. I knew that look. That was the look of a man who has learned something that cannot be taught, only shown.

There comes a moment for any soldier who sees combat. Before experiencing it, you know the risks, you know your job and what you’re there to do, but you cannot really come to terms with it until you experience it. You could die. You may have to kill. Death is terrible. There will be shock. There will be gore. He knew these things—everyone knows these things, where any last vestige of naivety dissipates, and reality comes knocking with all its delusion-stripping power. 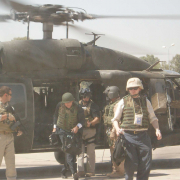 A Military Child Learns What It Means to Be an American. By Leaving
Scroll to top