We jumped off the dive boat and descended through the water column, swimming down toward an American flag blown outstretched by the current. The star-spangled banner hung proudly by the bridge of the former USS Oriskany aircraft carrier, now living another life as an artificial reef. The ship was 888 feet long, and roughly 2,600 people at a time had worked onboard while the vessel was at sea. The red stripes of the flag were muted by the depth of the water, rippling in varying shades of blue. Red is the longest wavelength on the color spectrum and the first to be absorbed when descending underwater; 80 feet below surface, only blue remained.

I checked my air pressure and depth as a reflex and looked to my dive partner. Kyle was wearing scuba gear from the 1970s that he’d bought online and rebuilt, cleaning or replacing rusted parts until the rig was usable. We were Navy Dive School classmates, training as military scuba and surface-supplied divers, able to work underwater for hours at a time. Our class was nearing graduation and had a long weekend off from school and military duties, so we’d decided to spend it diving just for fun. Kyle had only one breathing regulator connected to his air tank, no backup or emergency regulator. Even though he’d made the decision to use antiquated equipment for a 130-foot dive, I felt responsible for him, knowing he’d need to breathe off of my tank if his equipment malfunctioned. Learning in class about the various ways we could die diving made me more cautious, while the experience seemed to make Kyle bolder underwater. 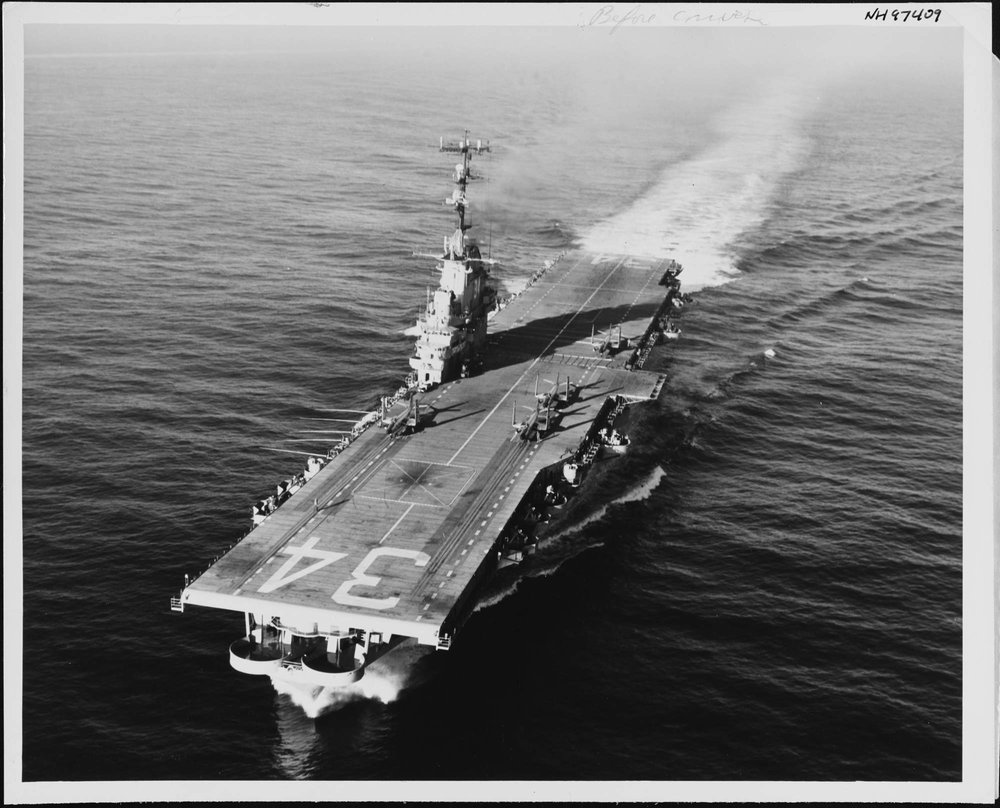 USS Oriskany off the coast of Southern California on January 27, 1955, with four F2H Banshee jet fighters on the flight deck. Courtesy of U.S. Navy.

Kyle took one look at the ship’s bridge and swam into the compartment through an empty doorway. I followed him inside the ship, a little annoyed that he didn’t bother to ask me with hand signals which direction I wanted to go. Only the top area of the bridge was accessible. Hatches and doors to the lower decks had been welded shut to prevent adventurous divers from going deeper into the Oriskany. I let air out of my buoyancy compensator vest to stand on the steel bridge and looked out over the flight deck stretching into the blue haze. We were 60 feet above the flight line where F-8 Crusaders had launched during the Vietnam War. In 1966, a terrible ordnance fire had ripped through the ship, killing 44 men and injuring 156 more. My flippered feet stood on the top level of the island structure where the Navy sailors had navigated, managed the flight deck, and performed air traffic control. Now the Oriskany was home only to ghosts and fish.

READ MORE
Rage and the Manger 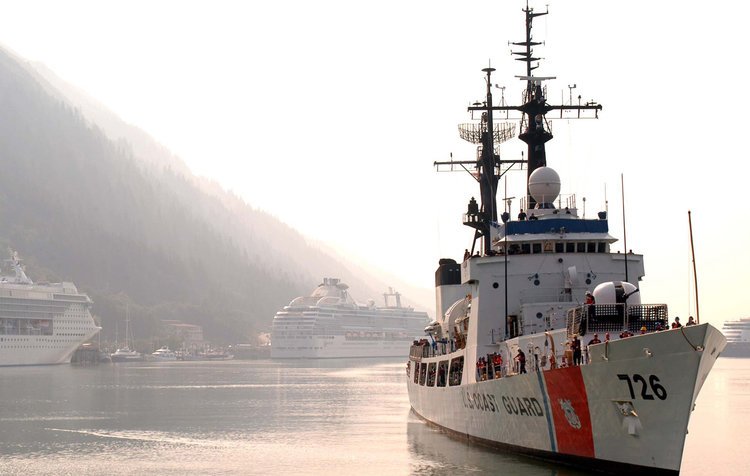 The author, Tenley Lozano, served on the USCGC Midgett six months before diving the USS Oriskany. Courtesy of U.S. Department of Homeland Security

I imagined someday diving on the sunken wreck of the Coast Guard ship that had been my second home for two and a half years, more than 12 months of which had been at sea. The USCG Cutter Midgett was a 40-year-old vessel when I sailed aboard her just a few months previous, and we’d worked to exhaustion to keep her afloat and moving forward, fighting against rusting steel and engine room fires. Thousands of sailors had traversed the oceans aboard the Midgett, riding out storms and chasing drug runners. The ship is one of the last in her class still operating in the U.S. Coast Guard, the older vessels sold off to foreign nations and traded for newly built ships.

Turning around underwater, I realized Kyle was swimming out through a window hole on the other side of the superstructure; I’d have to hurry to keep him in sight. Finning hard into the strong current, I swam through the window and saw that this side of the ship was guarded by a school of great barracuda. I grabbed the edge of the ship with a gloved hand and stared into the face of a five-foot-long fish with a gaping mouth filled with jagged teeth longer than my fingernails. I held still, not wanting to draw attention. They were all floating, stationary, faces to the current, eyes and mouths open, seemingly asleep. Their slender silver bodies were four to five feet long, with bright white stripes at the top. Over 20 fish were spread throughout the area, like sentinels in formation, waiting for the command to strike. 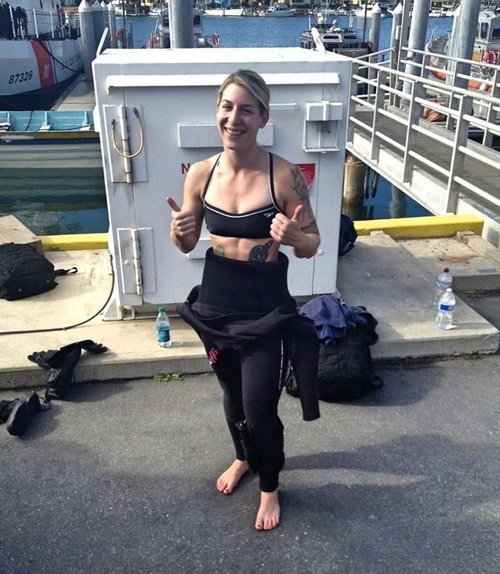 I wondered if barracuda attacked unprovoked, or if they could sense fear the way that sharks can read the electric signals of frightened fish. I hadn’t known that barracuda schooled like this, or that they could get so big. The only thing I could remember about the species was that a prolific novelist from Florida had used them as an amusing way to kill off a villain. The character had been wearing an expensive, shiny watch that he’d stolen, and when pushed in the water by the novel’s hero, the local barracuda bit off his hand. I wondered if I was wearing anything flashy, ran through a quick visual check, and then focused back on the fish. Maybe they were asleep. They didn’t even seem to notice my presence, and it was a relief they weren’t interested in me. I followed Kyle downward, releasing air from my buoyancy compensator vest to sink toward the flight deck.

Without any aircraft, the ship seemed empty. What had been a flight path was now just hundreds of feet of rusty metal. I wanted to dive inside the vessel, explore underneath the steel skin where the men had lived in the days before military women were given billets on ships. I wanted to discover its secrets, if the Oriskany had any left after being stripped of contaminants and valuables.

Working in the engineering department onboard the CGC Midgett, I had joked about wanting to see the ship become a sunken wreck. I thought it would be fun to explore underwater through the shroud of darkness and depth, to see the vessel stripped bare of all that made it functional. Then I saw how empty the Oriskany was without aircraft or people; the ship felt like the skeletal remains of its former self. After earning battle stars in both the Korean and Vietnam wars launching fighter jets high into the air, it had now become a destination dive for sunburned tourists. But maybe it’s right that these ships should rest at sea. It certainly seems like a higher honor than being sold to shipbreakers in Asia and torn apart for scrap metal. 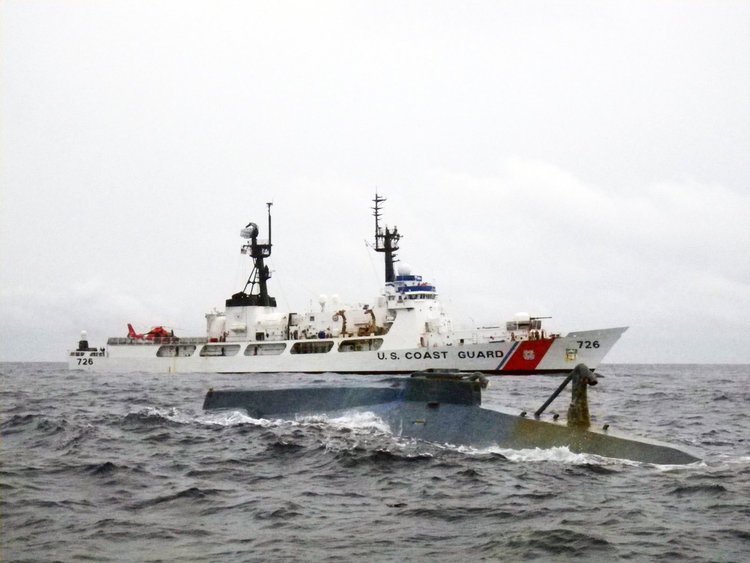 Checking my gauges, I saw that I was running low on air. Kyle was already heading up for our decompression stop. I gave the old ship one last look and kicked to catch up with him. A few minutes later as we climbed out of the water and back onto the dive boat, I wondered what would become of the Coast Guard cutter that had shown me so much of the world.

Six years later and the replacement National Security Cutter Midgett is being built in a Mississippi shipyard; and I am now a civilian working as a ship design engineer in San Diego, California. I spend much of my time at work imagining crews at sea fighting fires onboard ships not yet built. I think about keeping them safe even before the first steel plates are laid in the shipyard. Using my experience as a military shipboard engineer, I anticipate how people will react during emergencies, designing for fighting fires safely and stopping flooding from spreading. I stand next to those crews in engine control rooms and on bridges, thinking about how they will survive at sea when disaster strikes. I only hope the ships we design today can last as long as the Midgett and the Oriskany. 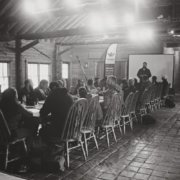 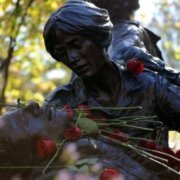 Zero Tolerance: The Defense Department’s Decades-Long Failure To End Sex Crimes In Uniform
She Needs a Background Check and a Day Pass to Visit Her Father’s Grave, Part...