There’s a recruiting practice that isn’t so well-known. After we went to war, as casualties mounted, tours got longer, and fewer people signed up, the Army started granting “moral waivers,” and a handful of soldiers in my platoon joined up this way. It meant that they could enlist, and deploy to Iraq and Afghanistan, even though they had “disqualifying situations.”

The disqualifying situations varied. Suicidal thoughts? Let him join. History of drug abuse? Sign him up.  Prior criminal convictions? Who hasn’t had a misdemeanor or two?

“Moral waiver” is a euphemism for the entire war.

A man I’ll call Garcia got in through a moral waiver, though I wouldn’t find this out until he had been admitted for psychiatric treatment. He did fine as an infantryman in Mosul, but once we got back, he had trouble holding himself together.

I saw the problem one morning during our physical training. It was a hazy, Fort Lewis winter morning in Washington state. I felt the cold bite into my skin—uncomfortable but not the bone-chilling freeze of an upstate New York. It was chilly enough for us to wear a knit cap, warm-up jacket, and pants while exercising. The damp didn’t help; the rain hung in the air and misted our PT uniforms. Our feet left deep green footprints in the grass where we stomped the dew away.

We began with warm-ups.  “THE KNEE BENDER,” I yelled.

“THE KNEE BENDER!” the platoon echoed.

“ONE!” they screamed in unison. The knee bender consisted of bending at the knee, like a half squat. I heard the familiar snap of old, worn joints coming to life. As always, someone made the Rice Krispies joke with the familiar snap, crackle and pop sound. After 10 of those we moved to the hip rotation, an infantry favorite.

“THE HIP ROTATION,” I shouted.

They dutifully replied, “THE HIP ROTATION!” We gyrated our hips first clockwise, then counterclockwise to my count. Several soldiers attempted to grind their crotch on the soldier in front of them, as a joke. It made me think of one formation where we stood at parade rest, our hands, palms out, in the small of our backs. One soldier pulled his scrotum out of his pants and rested his sack on the hands of the soldier in front of him. The soldier in front felt the familiar, wrinkled feel of a nut sack in his palm and immediately squeezed as hard as he could. The soldier behind him screamed and fell to the ground where he lay writhing in agony. 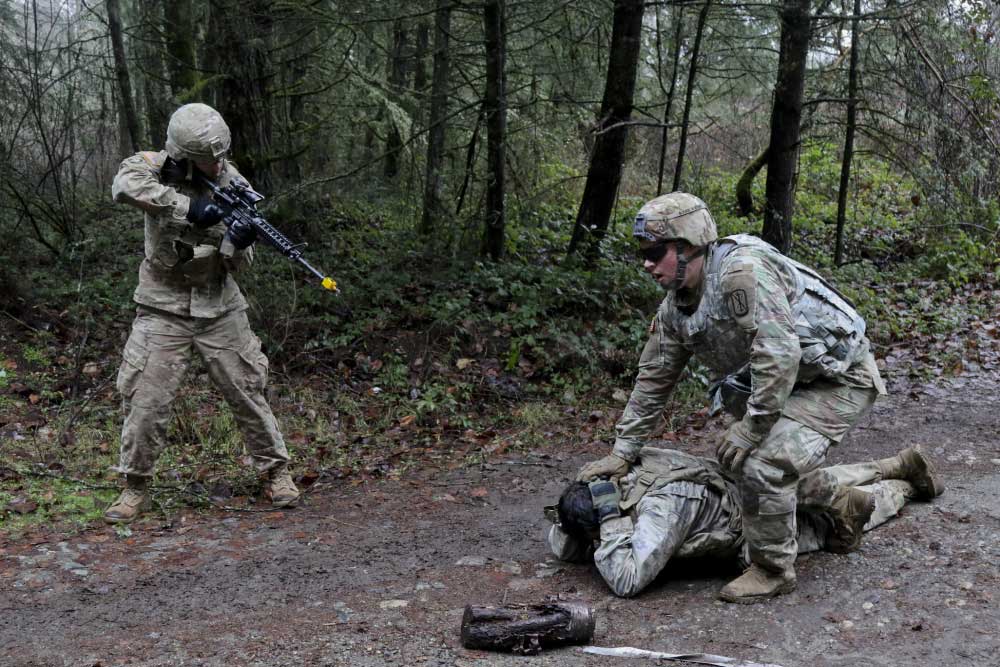 Next up were jumping jacks. Or, as the Army called them, the side straddle hop. We started the movement and I saw Garcia wasn’t jumping. He stared at the ground off to his right, as if he were looking for something he had dropped. I looked at the top of his head as he stared down; he had thick, pitch black hair that stood stiff and coarse. The sides of his head were shaved, but the stubble gave his scalp a permanently dark shadow. He was a medium height soldier and built like a refrigerator. He was muscled but also on the fat side and often had trouble keeping up on runs. He had a broad face like an ancient Olmec statue.

He kept looking down and to the right. I opened my mouth to discipline him, to get him back on track, but then he buckled. His knees shifted to the right, his body pitched forward, and he fell to the ground. I rushed over and he had his big head in his hands and was weeping. He started moaning. “Hey, are you hurt?” I asked. He responded with a deep, guttural wail and continued crying.

“Did you guys see anything?” I asked his squad. They said no. Garcia’s squad leader sprang into action.

“Go get a medic,” he told a private, who took off running to the aid station. “You two help me pick this fat fuck up,” he said to two other soldiers who grabbed him.

“Sir,” he said to me, “Keep running PT. I’ll take care of this and update you after.”

“Roger that, sergeant, keep me posted,” I said and went back to the platoon and finished the session.

Garcia was admitted to the hospital. He said he wanted to kill himself and was haunted by the fighting we saw. What followed was several weeks of diagnosis and discussion, and a team of people trying to put Garcia back together again.

He had suicidal thoughts since he was a kid. He never graduated high school. All of this should have kept him out of the military. But we needed people for the war. The recruiter took him to get his GED, along with a van of other men who had suffered similar hardships. The recruiter got Garcia a moral waiver. On one hand, it was a way out of the mess he was raised in. On the other, a fragile mind was thrown into a meat grinder.

After a couple of months, the Army deemed Garcia cured and he came back to the platoon. I was shocked, but we needed men.

Months later, after our deployment, I’m driving home from the base and I get a call from my platoon sergeant.

“Sir, you better get down to Madigan,” the base hospital. My heart sank. Someone did something stupid and fucked themselves up.

“Garcia’s baby was stillborn; they are at the hospital, but everyone is pretty fucked up.”

I felt sick to my stomach. “All right, Sar’nt, I’m on the way. Who all’s there right now?”

“Me, the chaplain, some nurses.”

I took the next exit and headed back to base, down I-5. I raced through traffic. Slow drivers decided the left lane suited them best. Fast drivers decided turning signals were for the weak. I weaved as best I could and followed almost all the traffic laws. As I sped down the highway, I confirmed I-5 drivers were the worst on the planet.

I called my commander. “Sir, we have an issue.”

“What the fuck now, Giacoman?”

“Of course, I fucking know Garcia. What the fuck happened?”

“I guess his baby was stillborn.”

“Awww, what the fuck?” he screamed. He sometimes talked like an engine revving—the “awww” was lower and slow, but the “what the fuck” was fast and high. “That motherfucker is so fucked.”

“Is Williams there?” he asked. Williams was my platoon sergeant.

“All right. I’ll be there too. Goddamnit, this is fucked up,” he said. 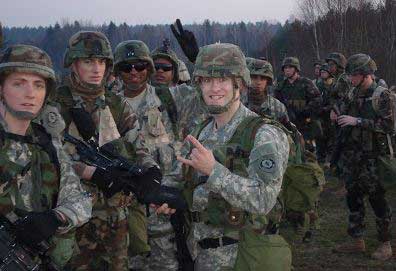 I went through security on the base, crisply returning the salute of the gate guards. It was night but the hospital gleamed like a white beacon. Or a white-washed tomb. I parked and walked quickly through the entrance.

I identified myself to the front desk woman and she directed me toward the maternity ward. The hallways were like every other hospital hallway on Earth. I wondered if they all had the same contractor. Everything was yellowish linoleum, like they took the floor of a ’70s kitchen and coated the walls with it.

I followed the signs to the maternity ward. When I got there, another front desk woman directed me to Garcia’s room. I walked slowly to the door. I’ve seen worse than this, I thought. I’ve dealt with worse than this. I took a deep breath and walked in.

The room reminded me of a dark Renaissance painting. No one noticed me entering. All the attention was on Garcia’s wife, Crystal, lying on the bed. She seemed like the only source of light in the room. Her pale skin reflected on all those around her. Her face was anguished, her eyes were deeply focused on the floor, off to her left.  My family was Catholic, and Crystal reminded me of depictions of the Virgin Mary in sorrow. She looked like Titian’s “Mater Dolorosa With Open Hands,” distraught and confused. Oh God, I thought, I don’t want to be here.

I saw Garcia seated next to the chaplain. He was still, affectless. My platoon sergeant was near the back of the room. I nodded at him, he nodded back. I quietly walked toward the chaplain and gripped his shoulder. We shook hands. I moved over to Garcia.

“I’m so sorry. Anything you need, you let me know,” I said. He looked at me and nodded. I moved to hug him, and he stood, embracing me briefly, then sat back down. I moved toward Crystal and touched her arm.

“I’m so sorry. Please let me know if we can do anything for you.” Her face turned toward me. She looked in my direction and then back over to the left.

I moved away to the edges of the room. No one spoke. I focused on my breathing. I was afraid to move, to disturb the setting. After an eternity, I couldn’t stay still and looked around.

In the corner was a crib. As I noticed it, a nurse came in. She saw that I was new and walked over to me. “Would you like a picture with James?” I looked at her, not understanding. She whispered, “Come with me.” She led me to the crib.

Inside, on a soft blanket was a tiny, blue infant. I couldn’t move, I couldn’t look away. “This is James,” she said. “Would you like a picture?” My breath came in short and shallow. I was worried that if I breathed too hard the world would implode. “No,” I said. 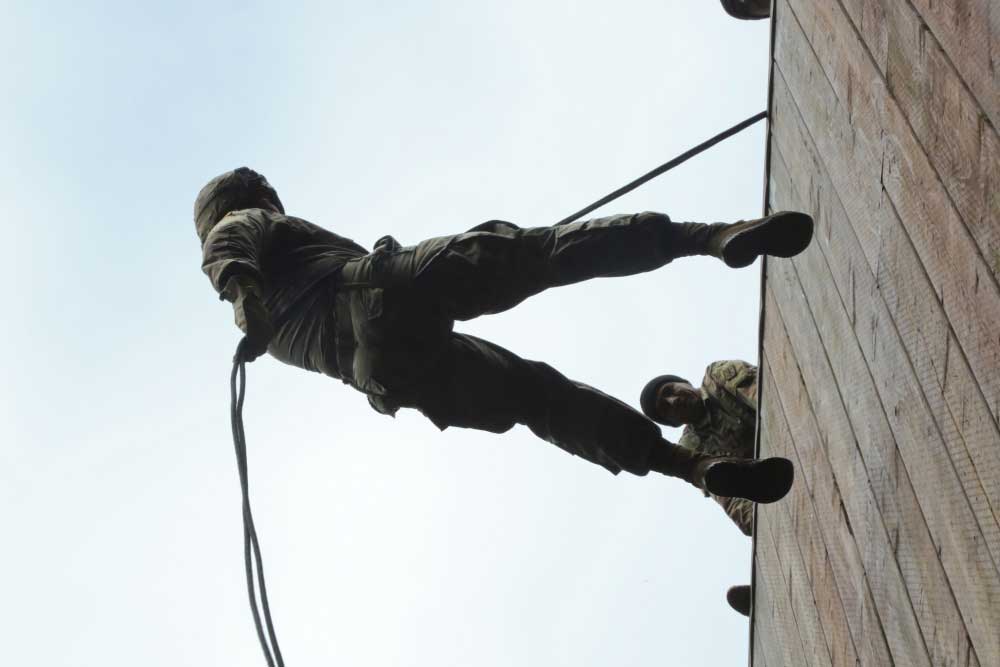 Soldier bounds down a 40 ft tower during a training exercise at Joint Base Lewis-McChord, Wa. U.S. Army photo by Staff Sgt. Jacob Kohrs.

She walked away and left the room. I moved slowly back to the edge of the room.

I stayed for maybe five more minutes. No one moved or said anything. I looked at my platoon sergeant, nodding, and he nodded back. “Anything you need,” I said to the room. And left.

I drove back home in shock. Hold him? I thought. Take a picture? What in the actual fuck? As I neared home, my commander called me.

“Hey, Giaco,” he said. His voice, usually wild and loud, was subdued.

“I was there, sir, but couldn’t stay too long.” I could hear exhaling, a deep breath.

“It was the weirdest fucking thing I’ve ever seen in my life, sir.”

“Jesus fucking Christ. YES IT WAS!” he screamed. The engine voice was back. “Did they make you hold the fucking dead baby?”

“They tried, sir, but I couldn’t deal with that shit and left.”

“Well, maybe that’s how they do it, sir, like for the families.”

“Giaco, this was some weird fucking shit.”

“That it is, sir. I guess Chaplain is staying out there?”

“Yeah, he is gonna stay for a bit.  Fucking Garcia’s gonna be out for a while but I’ll see you tomorrow.”

I waited. After a while I realized no clarity was coming, and God was not going to deliver any answers tonight. I went inside the house, took a shower, and went to bed.

Letters From War and Drawing “The Line Between Respect and Caution”
Why Isn’t Infertility in Military Women a Bigger Conversation?

Betrayal, Sedatives, and the Long Road Home
Scroll to top